Stop GIMP from intersecting same-direction shapes within one path

There is a line of text I`d like to transform as a path and then convert to a selection to perform an effect:

The method I use now is Path → Path To Selection. What do I need to do to convert properly?
The version of GIMP I use is 2.10.24.

Known "problem". The solution is to use the ofn-text-path-selection plugin. For instance with a path like this:

And the plugin instead gives you a selection that renders like this:

The problem wasn't so trivial

Apart from the script mentioned by Xenoid, another possibility would be to type the text in Inkscape, convert to outlines, ungroup, do a Union boolean operation, save the SVG, and import into GIMP as a path. 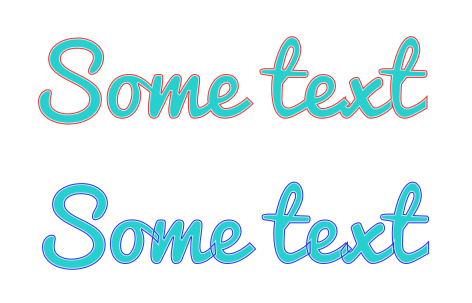 Also, what kind of effect are you trying to create that would require paths in the first place? It might simply be easier to use a vector image editor such as Inkscape. For example, text along a path is much easier, and text doesn't even need to be converted to outlines first in Inkscape.

Not the answer you're looking for? Browse other questions tagged gimp text path selections or ask your own question.

5
Gimp: Add text to Layer Mask?
3
Tapered/sloped text effect in Illustrator (NOT skew or perspective)
4
Exporting square tiles from a stripe - in Inkscape or Gimp
0
Creating a selection from a path with 'holes'
0
Transform stroke effect into typing path
1
Placing Vector Object On A Path
1
Filling overlapping paths
0
How fill a text colormap as invert of its background
1
Gimp: Derive necessary editing process from difference between original and processed image
0
GIMP: Text changes when editing it