How can you place an object that had a white background removed using multiply blending mode, onto a black background in Photoshop?

I have some pictures of products that are on a plain white background. I used multiply to remove the background cleanly, then I wanted to put the objects onto a new background that is dark in colour.

Edit: Here is a sample picture by popular demand, although I am not sure how this can further clarify things. I included a screenshot so you can also see the order of my layers. Chips packet is on top, white, grey and black beneath it. Thank you. 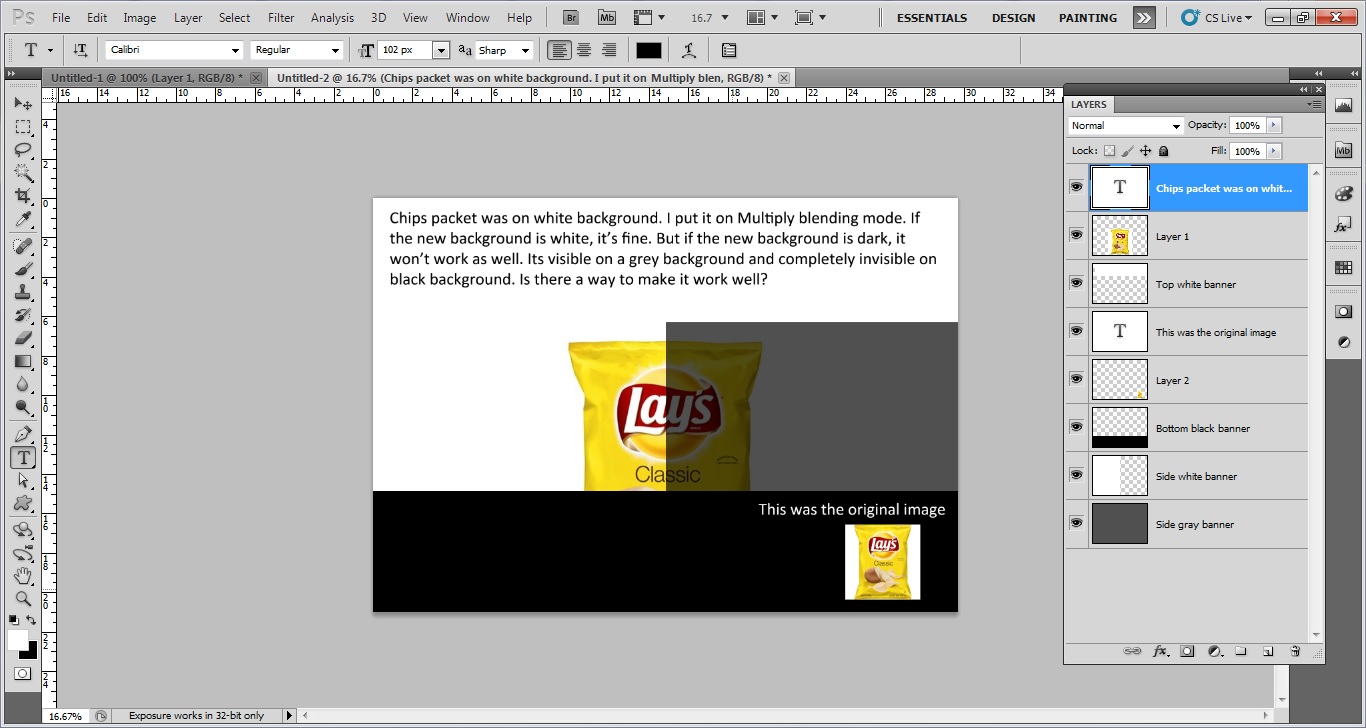 adobe-photoshop blend-modes
Share
Improve this question
edited Jun 21 at 12:45
I have many questions
asked Jun 20 at 7:03

I skip attempts to fix a bad photo. Here's an older case where the problems were low contrast and noise: Removing the background from product photos

Bad photo is avoided by having a photographer who knows what to do and has proper tools for the task. If he knows that the image will be used against dark background he can avoid making it look like it's shot against white background.

Transparency is discussed in other old cases. An example: Photoshop: How to make shadow more realistic

The next image has the rest of the problems 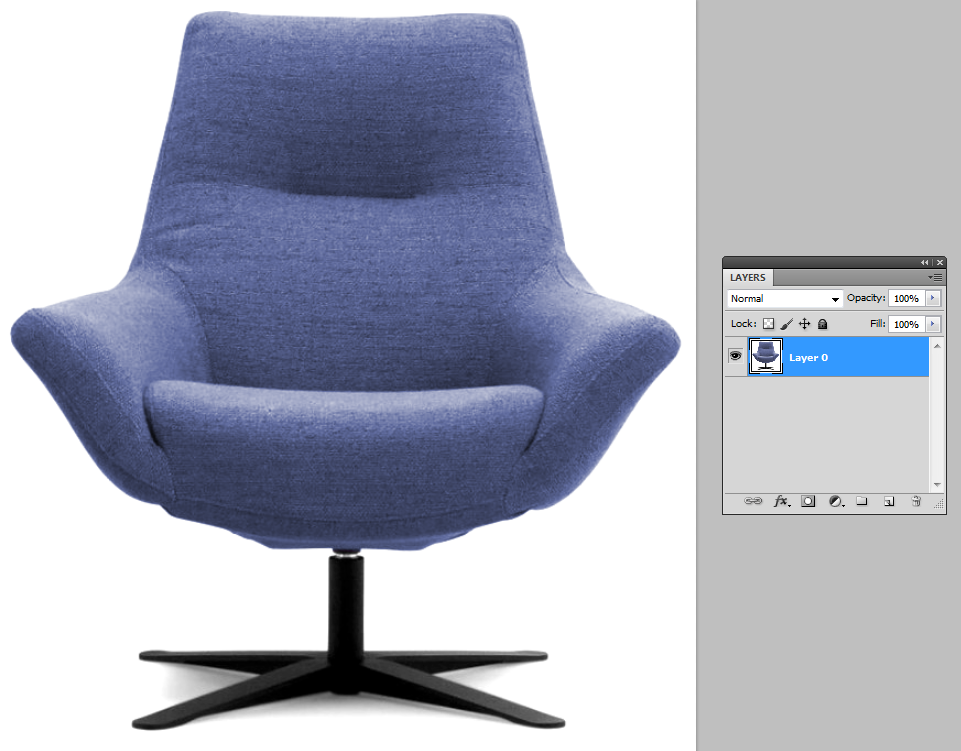 It doesn't look especially bad with its white background, but closer look shows how unsharp it is. There's just as much resolution as watching it on the screen without zooming in needs. No matter how the background is selected and removed there will be either well visible white stripes at the edges or also pixels of the images will be deleted and the edges will look jaggy.

This is how far you get by applying only blending, in this case Photoshop's layer blending sliders: 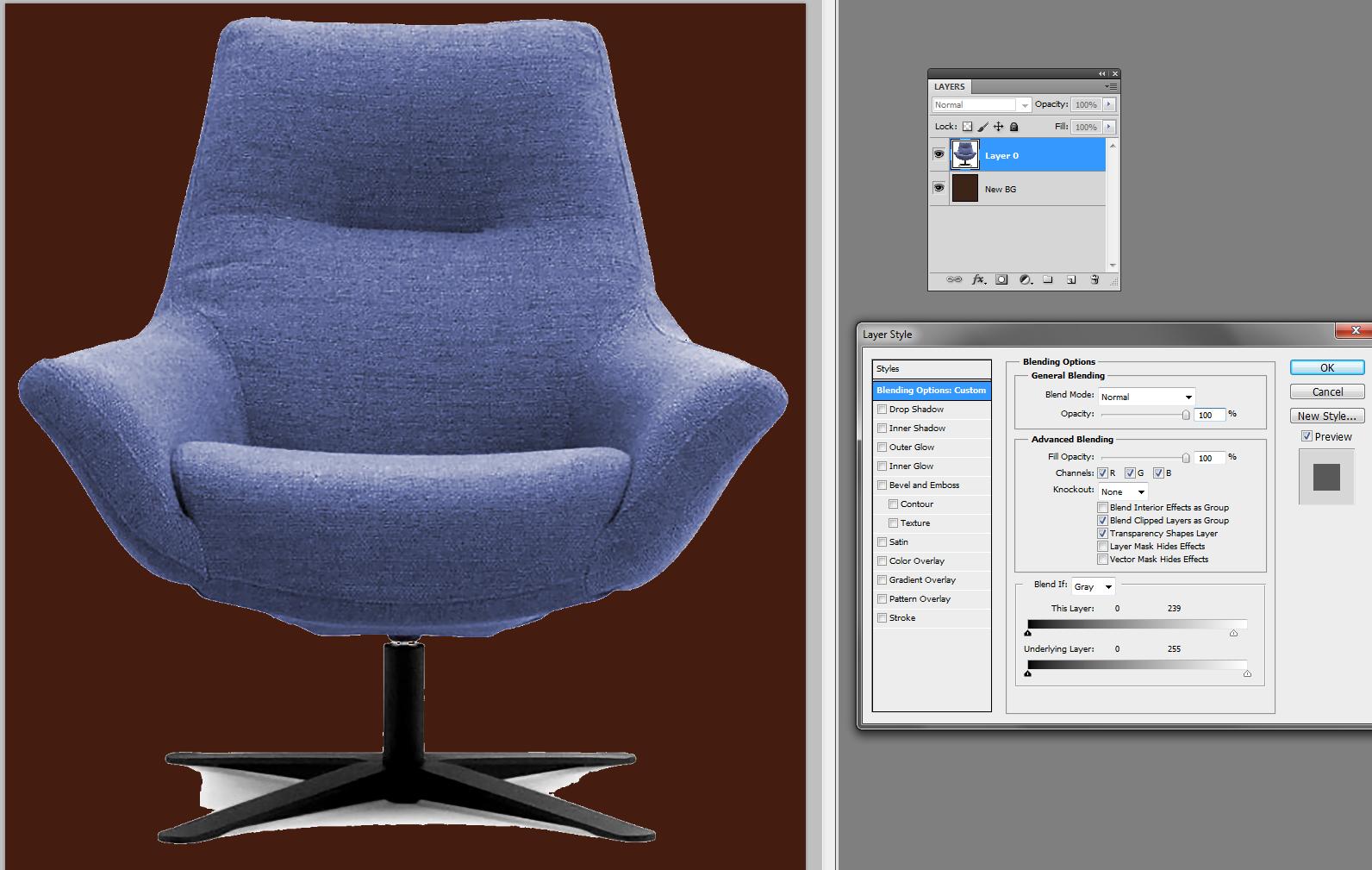 The shadow spoils the job. The shadow is darker than the lightest part of the dark stand of the chair. In addition blending gives no way to remove the light edge stripes where the white BG and the object are mixed in the image. You must make a selection to remove or replace the unwanted.

Using the magic wand with tolerance =5 and inserting the shadow to the selection by holding shift and clicking several times gives this after the deletion: 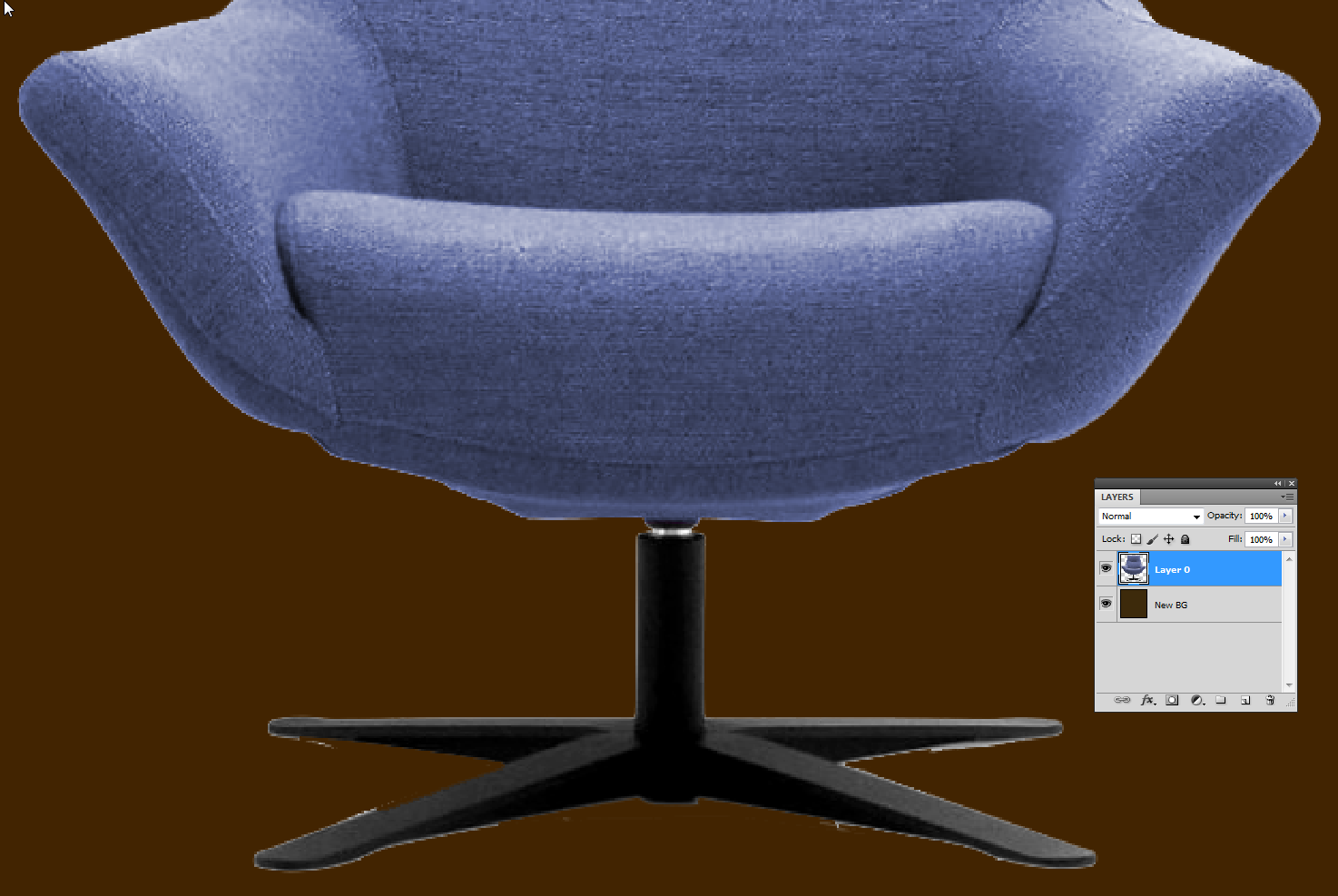 At light edges pieces of the object are clearly missing and dark edges have light stripes.

Photoshop's quick selection tool makes a better selection. The tool is quite clever and it can be teached by inserting and subtracting in turns at both sides of the wanted edge. But there's still light stripes at the darkest edges because the object and the white background were mixed. In addition the quick selection tool leaves sharp intern corners unselected. In those corners you see several white pixels: 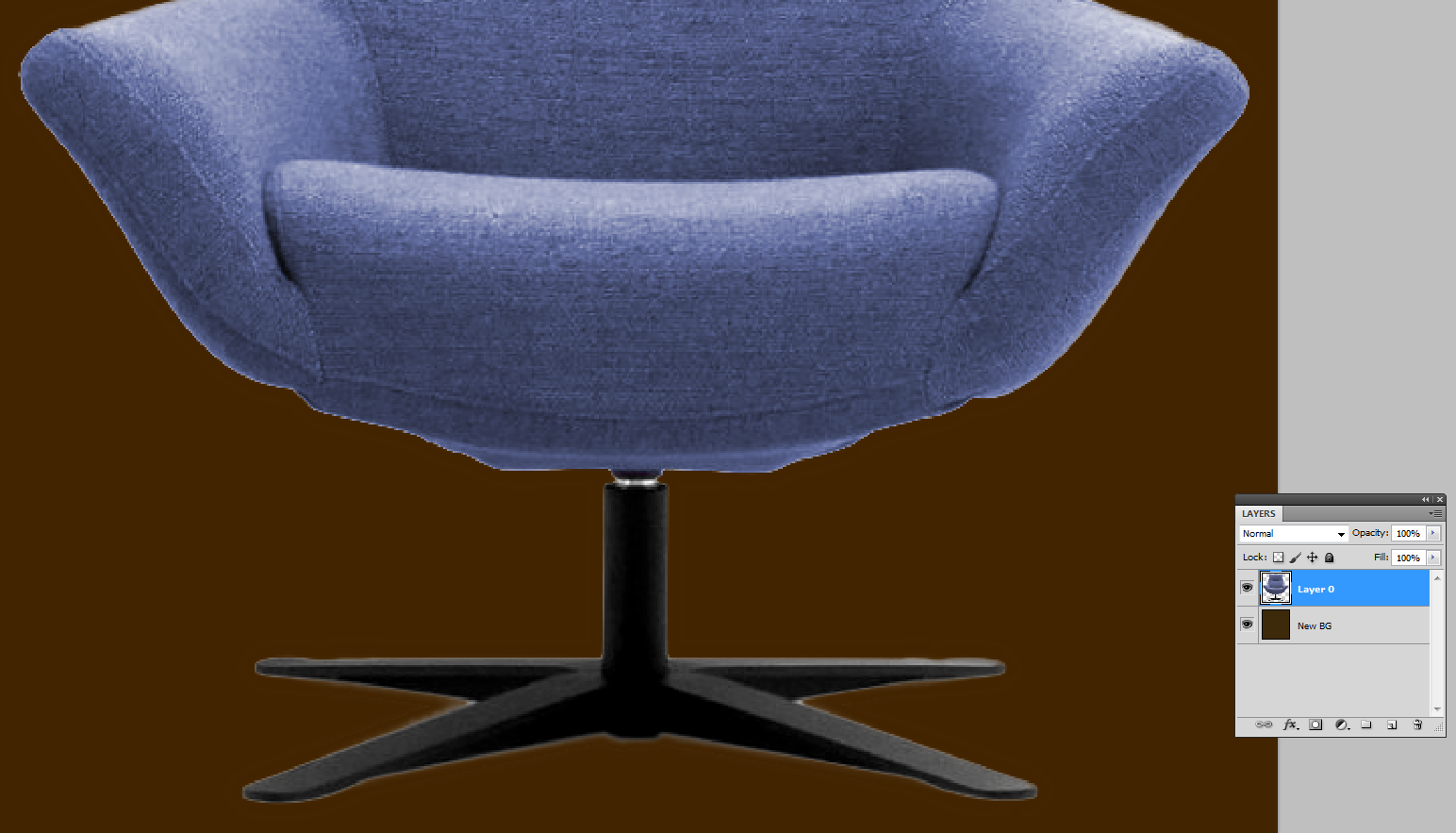 The white inside the corners must be clipped manually. In theory you could shave out manually all mixed zones like in the next image: 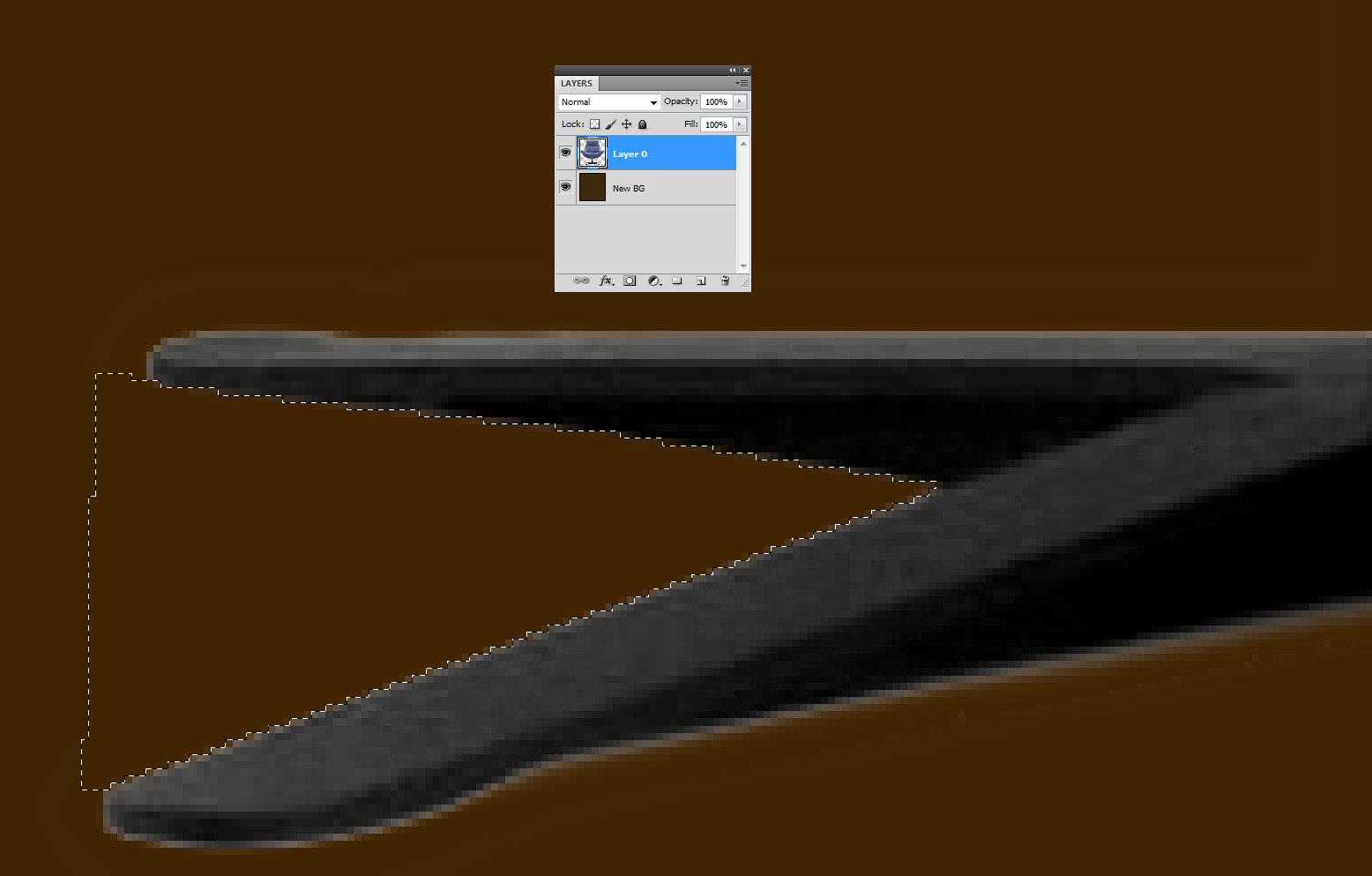 Actually only the sharp corners need fully manual treatment. The rest of the shaving could be made by expanding the background removal selection. But due the low resolution that will remove a wide slice of the object, too, so I delete manually only the whites in sharp corners: 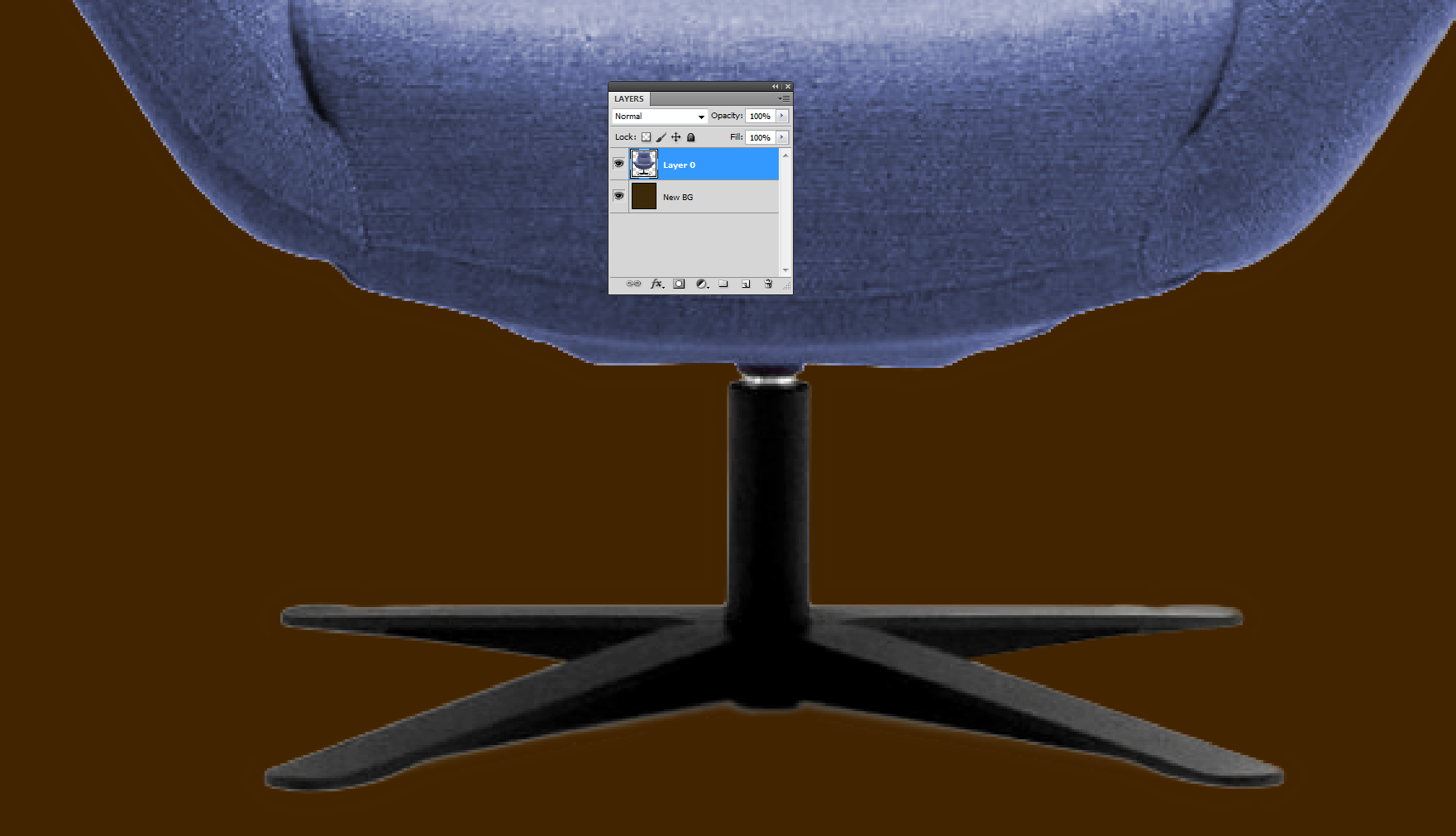 The light stripes can be fixed by repainting them. One can make a selection which covers the object. The selection is fuzzy due the antialiased edges made by previous selections & deletions.

Make the selection by clicking the object layer icon in the Layers panel. The marching ants line is the 50% opacity border:

In the next image the edge stripes of the left half of the image are fixed by cloning darker color over the edges: 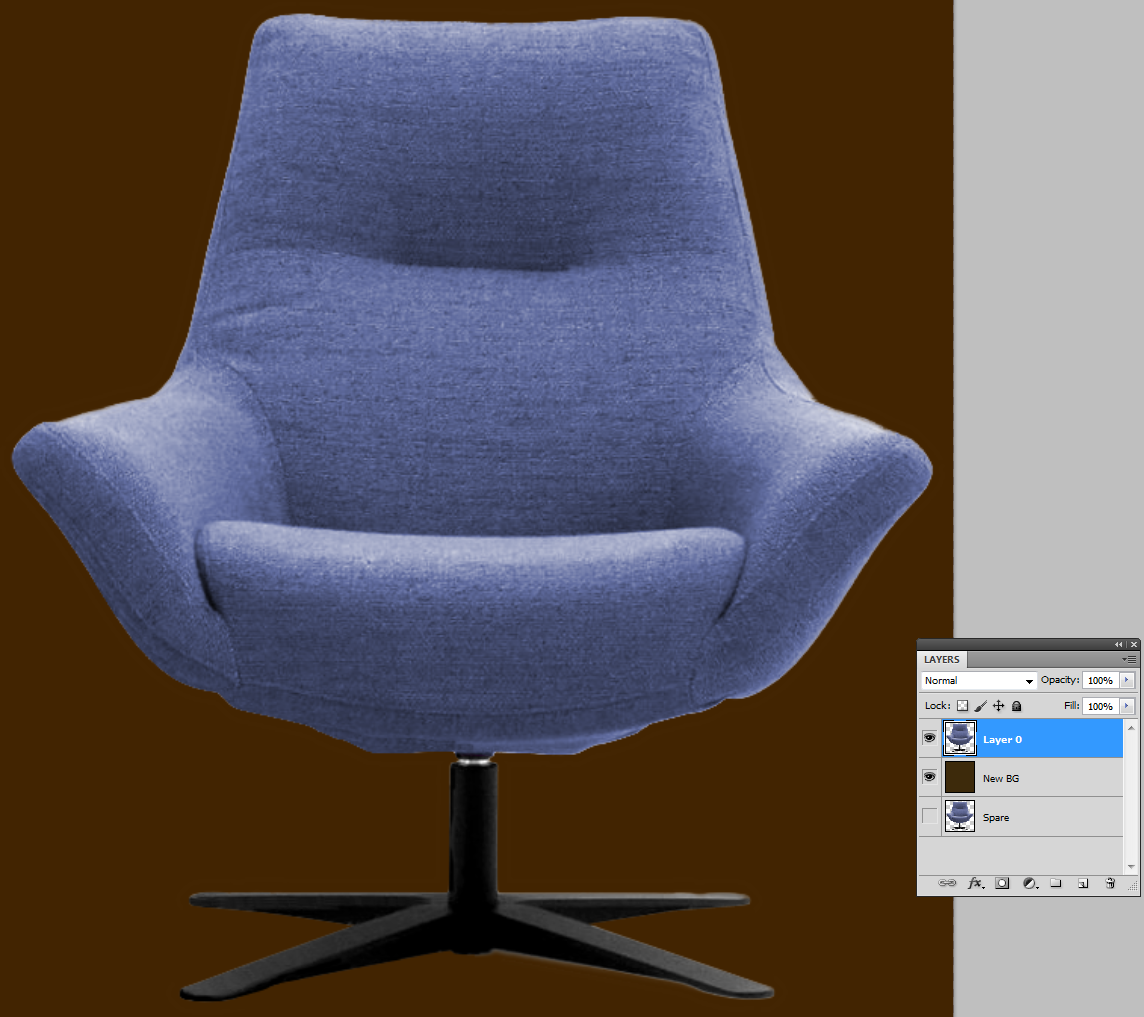 There was reflected or directed also light to the bottom which is not plausible against dark background. It's fixed (left half only) at the same time.

I guess manual painting over fuzzy edge pixels sounds not so pleasant, no matter it's only cloning, not actual painting. There's no need to do it if you can accept brightly lit bottom: 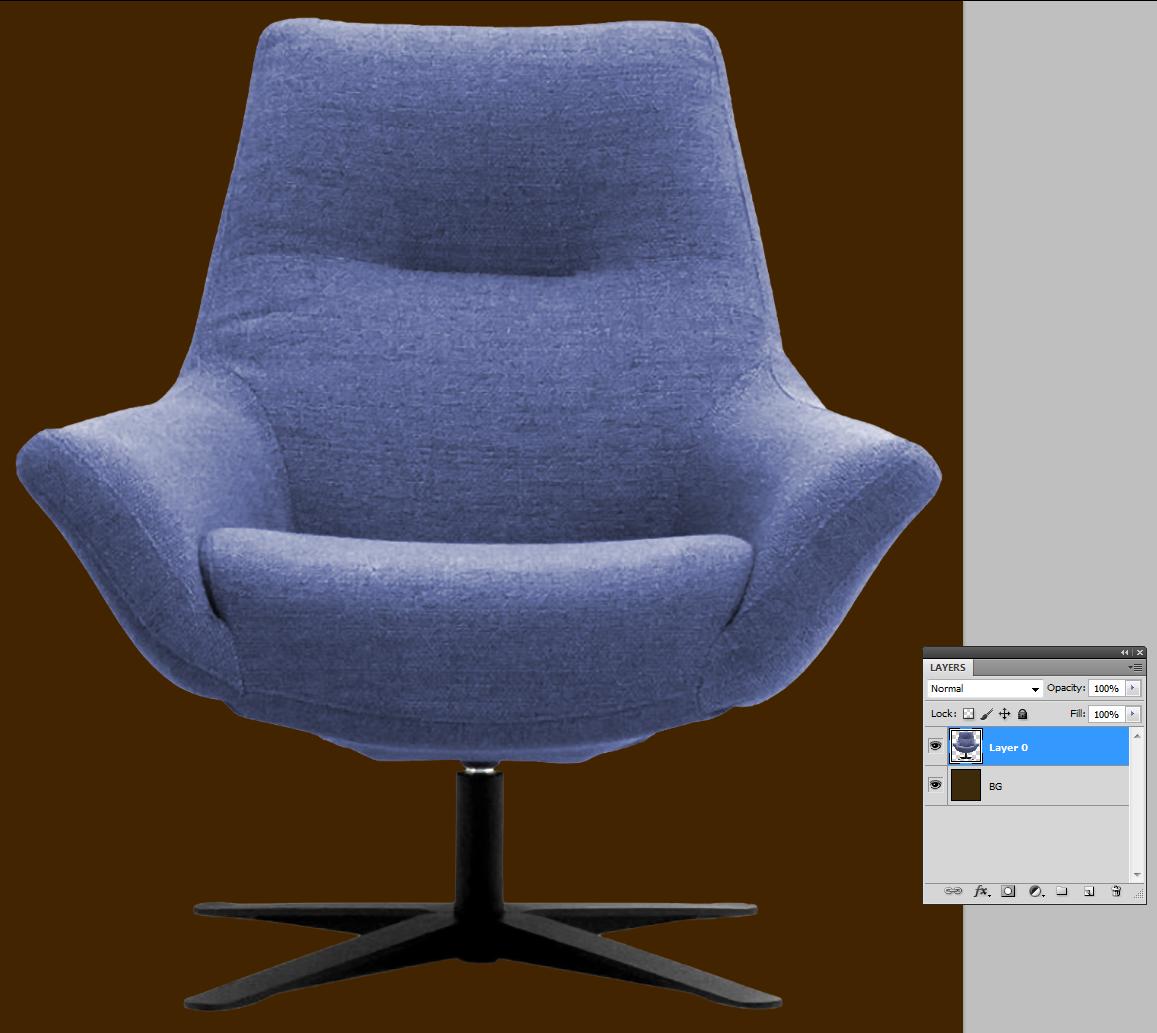 There's zero local manual edits. The image resolution is lifted to 400% with Smilla Enlargener (=freeware) That program guesses remarkably well where is a sharp border that shouldn't be made wider in the scaling process. One commercial alternative for it is ON1 Resize which works well as Photoshop Plugin. That's handy but otherwise ON1 Resize isn't substantially better.

White is selected with the quick selection tool, the selection is expanded one pixel (Select > Modify > Expand > 1px) and DEL is pressed. When watched in original size the white stripes are nearly invisible.

Another way to avoid manual edge painting without lifting the resolution is to insert layer style Inner Glow. That unfortunately works only if the object has single color. Otherwise differently colored parts must be treated in different layers.

The next old case reveals still one more way to treat the edge color problem: Halo around coloured glass bottle

ADD after the "problematic" image was shown in the question:

The image looks a high quality shot, just what one should expect from professionals. Assuming your version is say 1500 pixels high or more I can say that there's nothing problematic I described above.

Select the white area with the quick selection tool and press DEL. 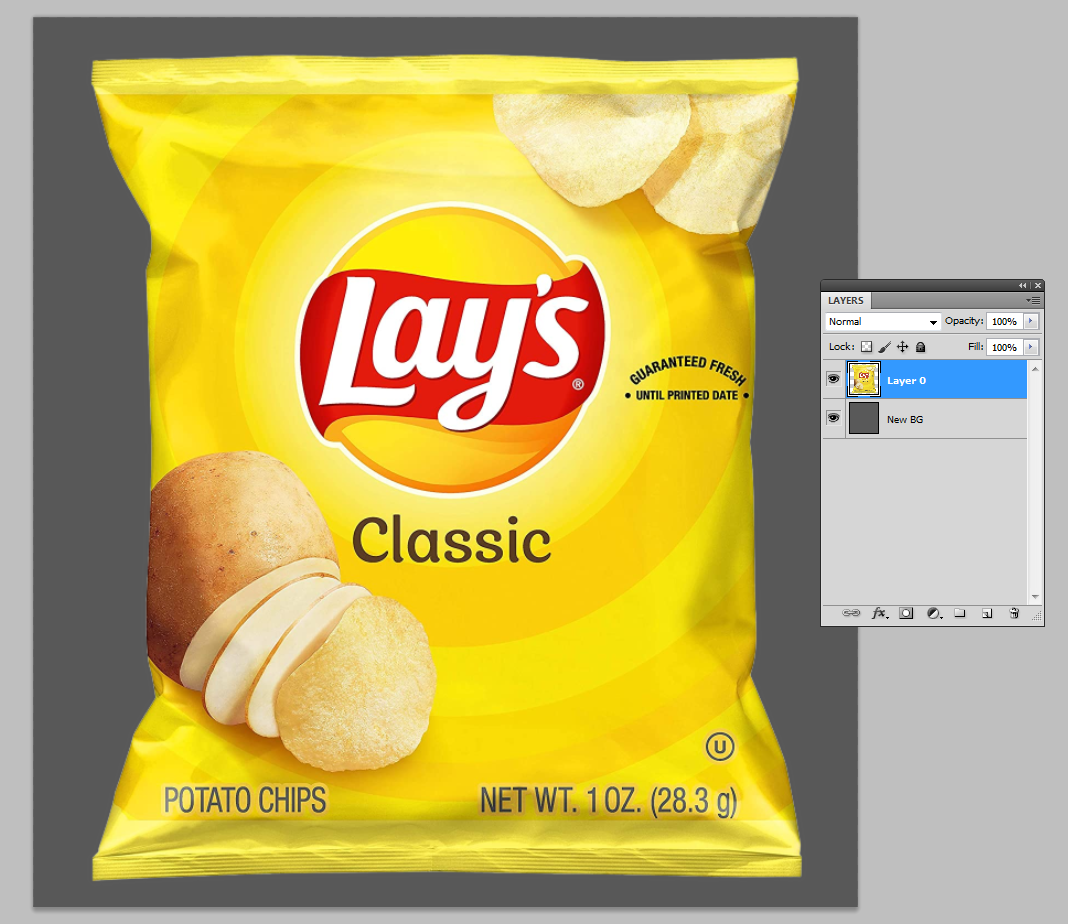 With extreme zoom in you may see that the 1px wide antialiasing zone contains remnants of white. If that disturbs you Undo DEL, Reselect and goto Select > Modify > Expand > 1px and press DEL.

The edge will be this clean: 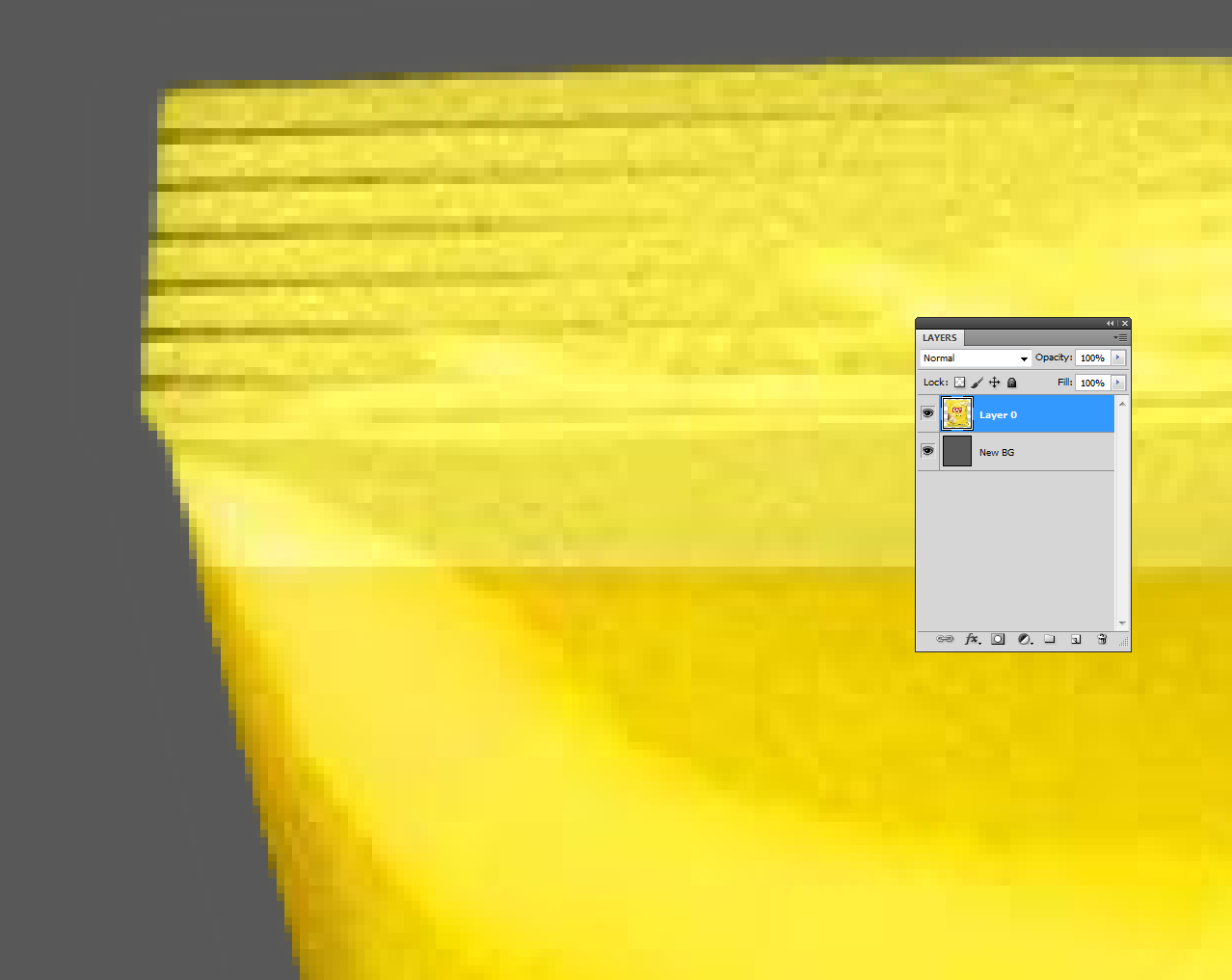 Not the answer you're looking for? Browse other questions tagged adobe-photoshop blend-modes or ask your own question.

14
What's the best way to remove a white background when the Magic Wand tool doesn't cut it?
2
Photoshop: How to make shadow more realistic
2
Removing the background from product photos
3
Halo around coloured glass bottle

2
Can you save an image with a white background as a transparent image out of Photoshop?
3
How can you convert a black and white image into color using Photoshop?
2
How can you find the percent of the total image that one object uses?
2
How to put a new background behind black text that already has a white background?
3
How to make a .PNG that shows one image on a black background and a different image on a white background?
1
How to Change White to Black Inside of a Vector Image Using Photoshop
1
How do I have a black on white drawing into a black on clear drawing using adobe photoshop?
1
How do you achieve that black/transparent look in photoshop?
0
In Illustrator, how can you create highlights using blending modes?