Using Inkscape 1.1 I have a triangle aligned with a circle and want to have 4 copies of the triangle at each side of the circle. When using the Rotate Copies Live Path Effect and snapping the origin to the circle midpoint, the triangles east and west get deformed and are far away from the circle.

How should I use the Rotate Copies effect to get a fully symmetrical picture? 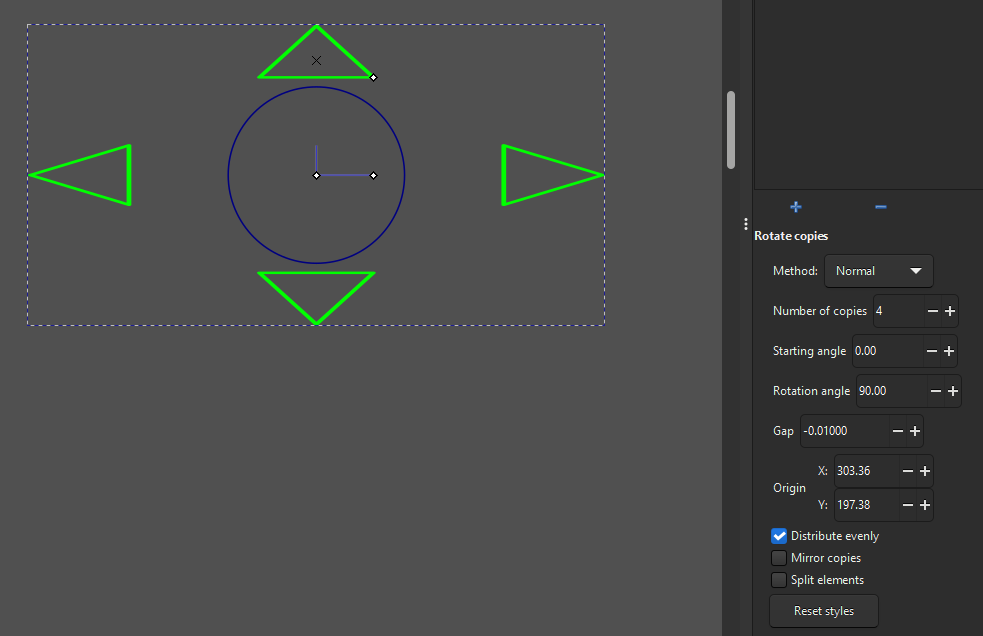 After some investigation, it would appear that if you have any transforms applied to a shape, such as a stretched triangle, the Rotate Copies LPE effect will itself also be tranformed. This is perhaps something which could be considered a bug. It's unexpected behaviour at the very least.

So, with that in mind, here are a couple of possible fixes, all of which are simply designed to avoid transforms altogether:

Now it should work as expected.

Not asked but do not tease yourself with the complexity of that effect.

Make a triangle and 3 copies. Make the copies with Ctrl+D. rotate them with the fast 90 degrees rotate buttons. It takes about 15 seconds. Draw the 1st triangle by holding Ctrl for known straight position.

Place them on a circle which is converted to path to have 4 symmetrical nodes. Have point snaps on for exact snapping.

Scale the circle to the wanted size. Hold Shift+Ctrl to keep the center or input the size as numbers.

Not the answer you're looking for? Browse other questions tagged inkscape path-effects or ask your own question.

3
Is there a way to copy live path effects from one object to another in Inkscape?
1
Selecting Object using Left Mouse Click copies Object in Imported PDF in Inkscape
0
How to get complement of path in Inkscape?
1
Inkscape: make path more edgy
3
How to step and repeat in Inkscape (or Scribus) with live preview?
4
Is there any difference between combine and union with respect to the difference operation?
0
Hue rotate in inkscape
0
Substitute object file path in Inkscape
1
Inkscape Pattern along path generate repeated outline and not fill