How to add sunset rays to trees? 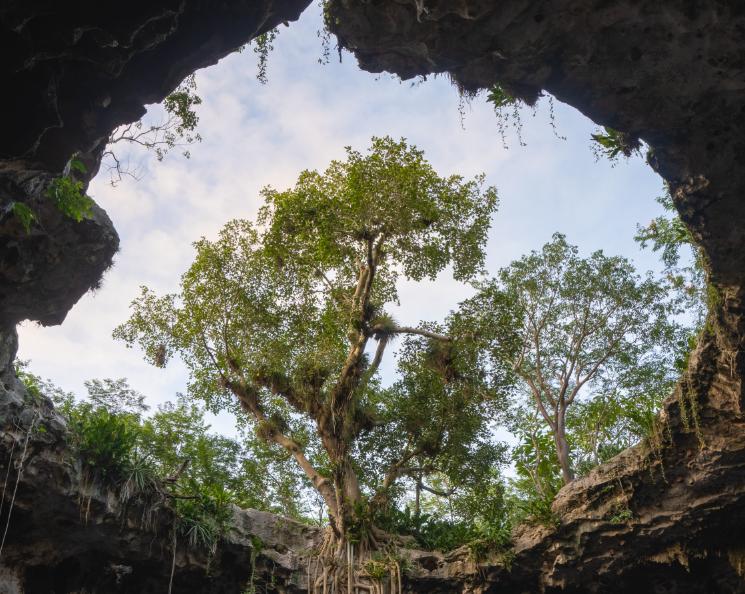 I have the following image which was shot during golden hour. Unfortunately, the clouds did not co-operate so the lighting ended up looking very bland.

Are there filters out there that can simulate sun rays hitting part of the tree? Something like this would be useful. 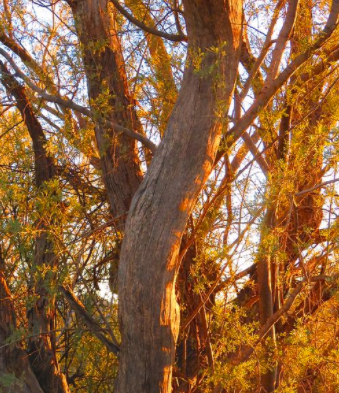 Since you also have Lightroom, just going to add an answer for that software too.

To make it pop and bring in the warmth of the sunlight, I did some tweaks to white balance (Temp), exposure, contrast, highlights, shadows, white and black, clarity, dehaze, and vibrance. One can easily be tempted to go too far here, and perhaps I did, so these could be dialed down a bit for more realism.

Obviously, the results will be even better if you have the original RAW from the camera. Only having access to a jpg is less than ideal.

If you want a generic push-button, instant-gratification enhancer, there are quite a few about these days, & Luminar [which you already have] is amongst the best of them. Dial in 'sunset' or 'golden hour' & see what you find.

This was a one-button-press in Luminar. You can fine tune any aspect of this type of edit until you're happy. 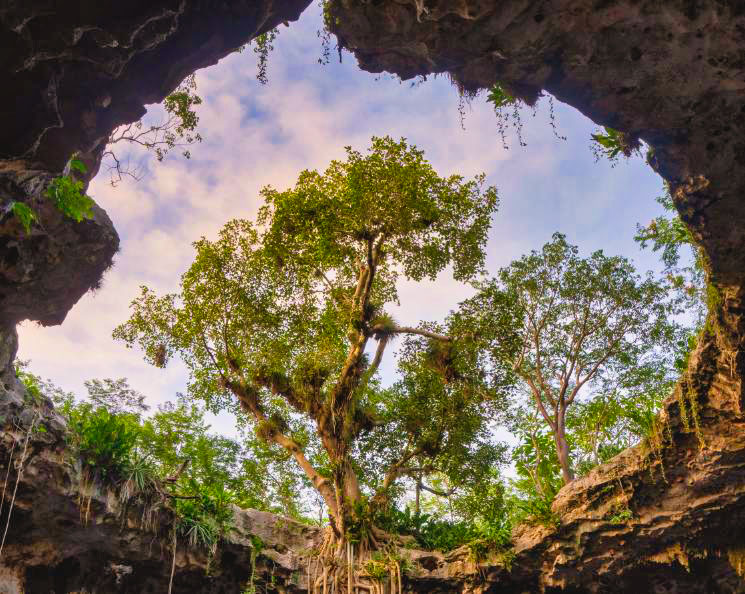 You can be very subtle with this type of app, but of course there is always the temptation to go completely overboard.
You could throw in a new sun, with user-definable parameters… [sun here is hard left, peeking through the gap in the rocks] 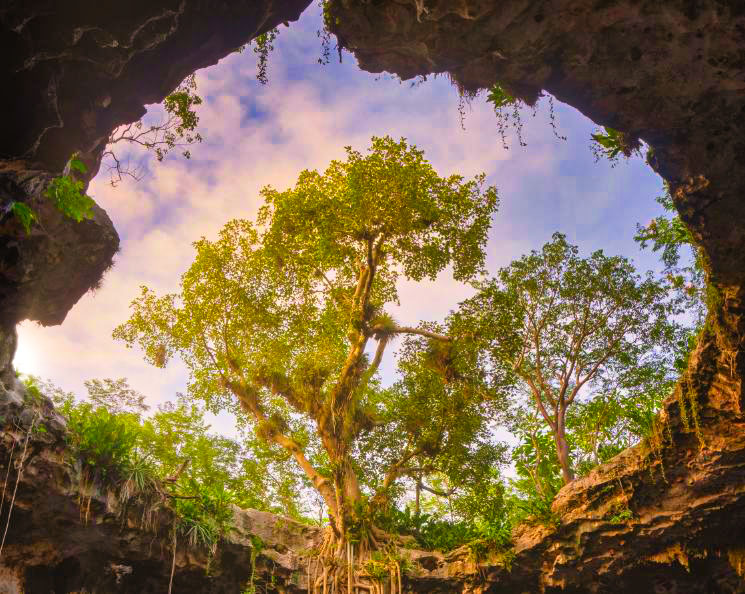 Usually the difficulty with this type of editor is keeping your image somewhere within the realms of reality.
You really can do some quite excessive edits in this type of thing, like replace the sky entirely… 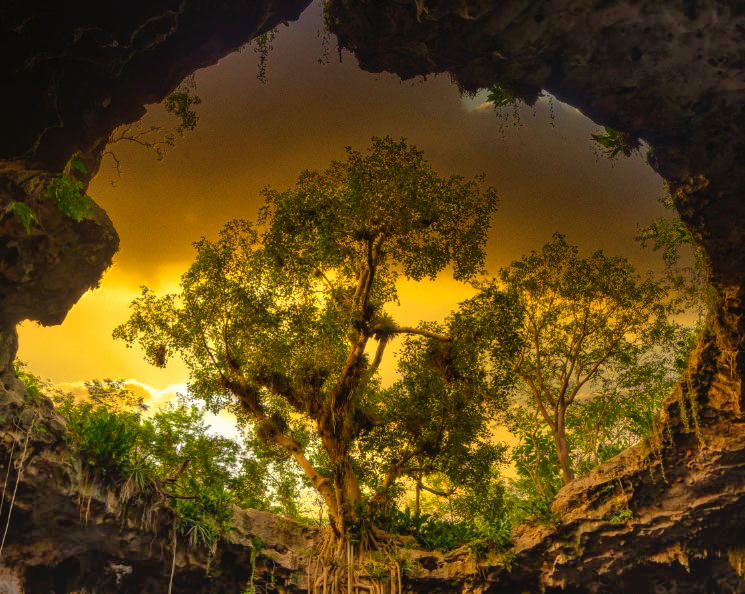 You just have to know when to stop ;) 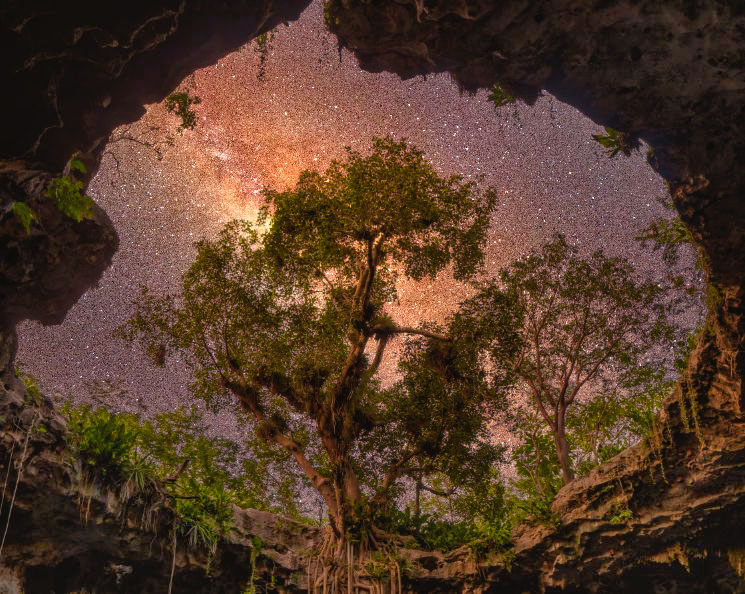 The sunset colorizes the sunny side of all parts of the trees and other things it meets. Converting a photo to have realistic sunset light is unfortunately very difficult. No automatic filter can decide which parts of the image should be colorized - the image has no 3D information to decide the lit surfaces and shadows. The direction of the sun is not enough. You must be able to select the areas in the image which should be recolored.

In theory one can cheat by colorizing all in the sunny areas and let the shadows be what they happen to be, no matter the light direction can be radically off. That's used in my example, too.

Another problem is the sky. Sunset sky is different than the sky in the middle of the day. It probably could be copied from somewhere. Or one could create it with color and contrast adjustments or even paint it. But making a plausible selection or mask to change the sky is difficult, even impossible if the trees and bushes have much only few pixel wide details where the sky can be seen through.

At first in the bottom layer the original has got general contrast boost with curves + red is boosted even more. The idea is to make the sunset glow on the tree tops maximally bright: 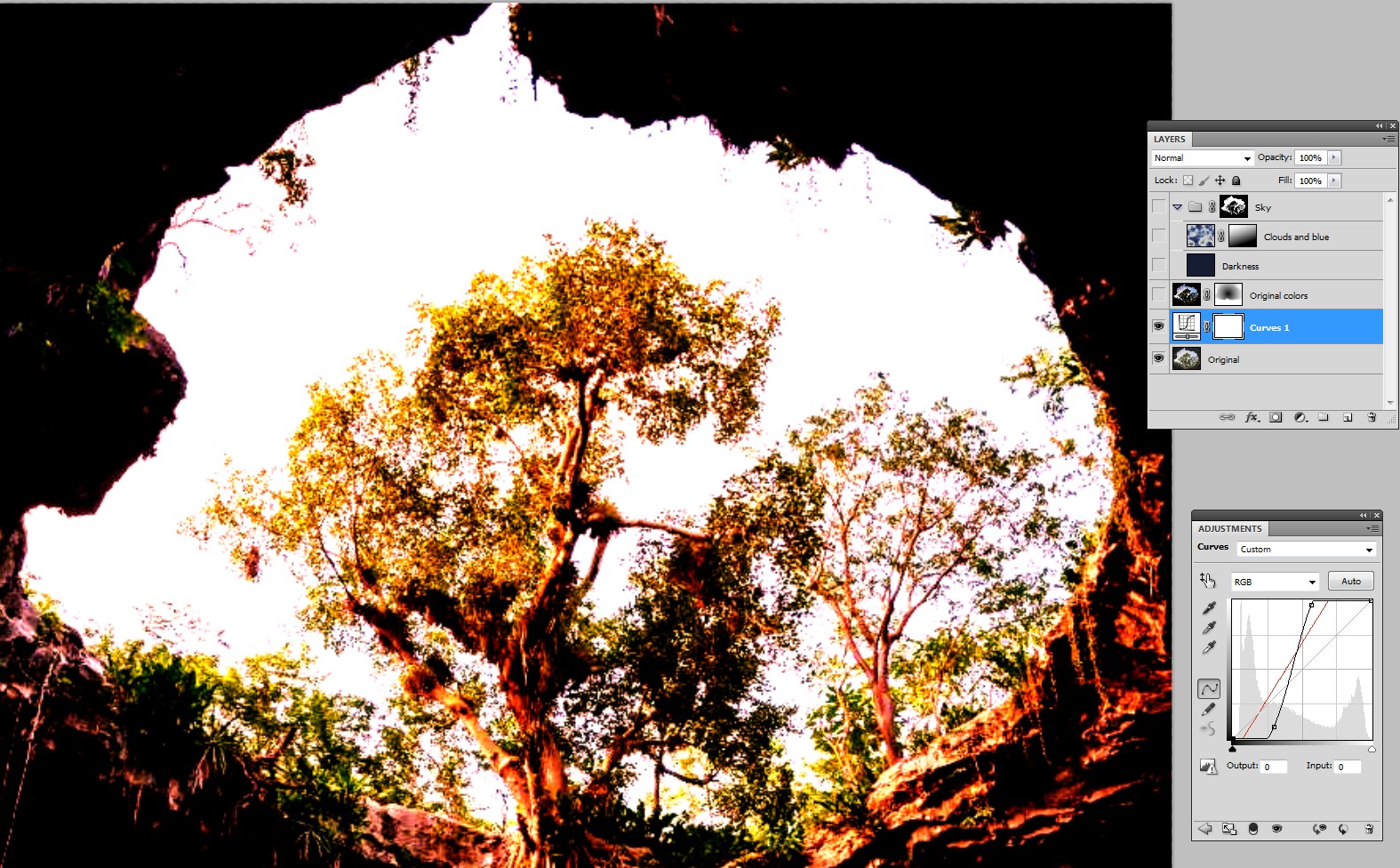 There's an adjustment layer, because the effect is inserted with no reference. Adjustment layer can be readjusted when there's more.

That, of course cannot be global. A new copy of the original is inserted. It's made darker than the original, masked off in the middle and at the edges it's partially transparent because the reddish light must affect also to the parts with less direct sunlight: 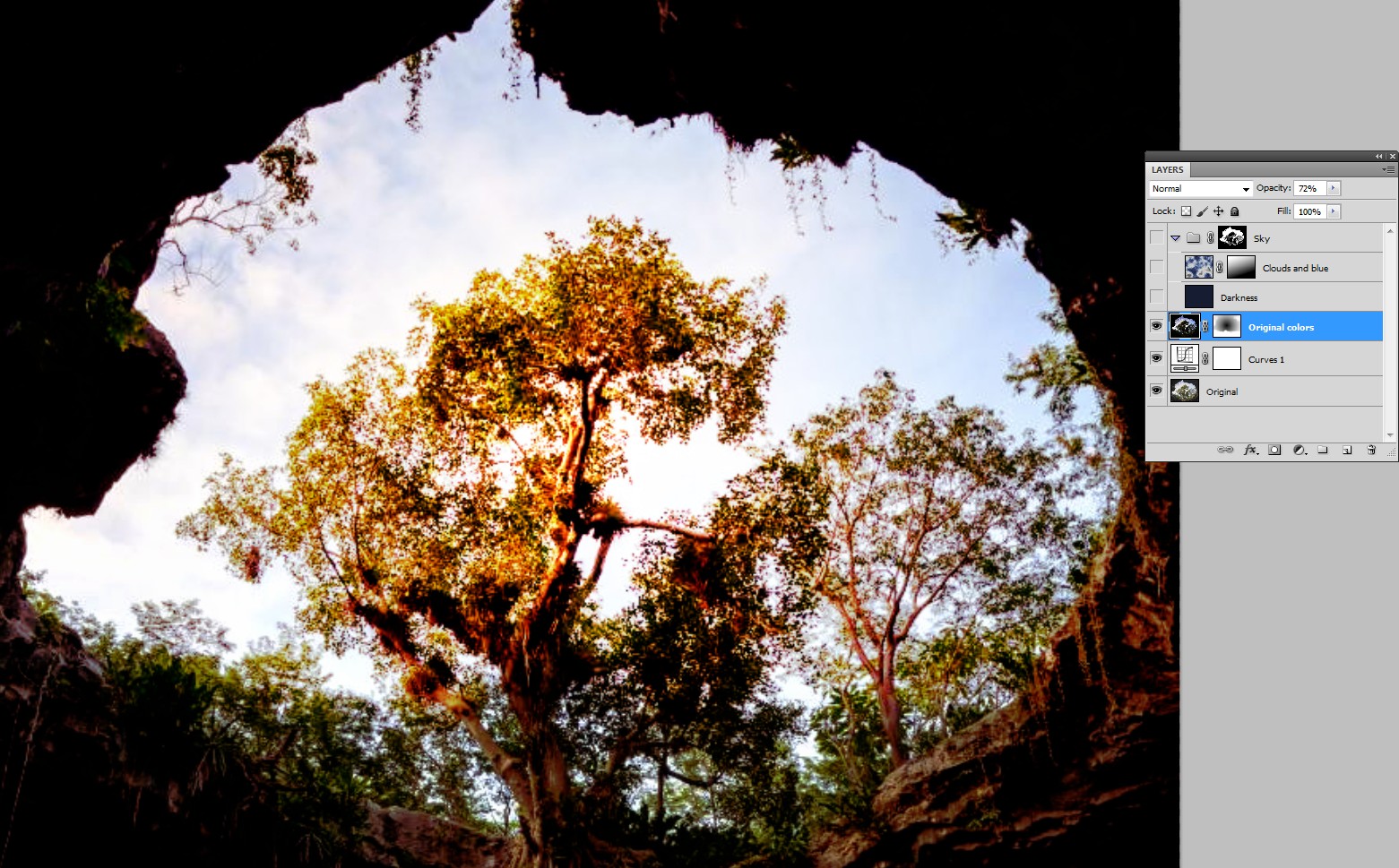 The sky fades the red glow - it's too bright. A new sky is made with the Render > Clouds filter. It fades to black downwards - the watcher is assumed to look about eastwards where the sky is darkest in the evening.

The blue is quite dark, but clouds reflect some sunlight and make the not directly lit bushes still to have some color: 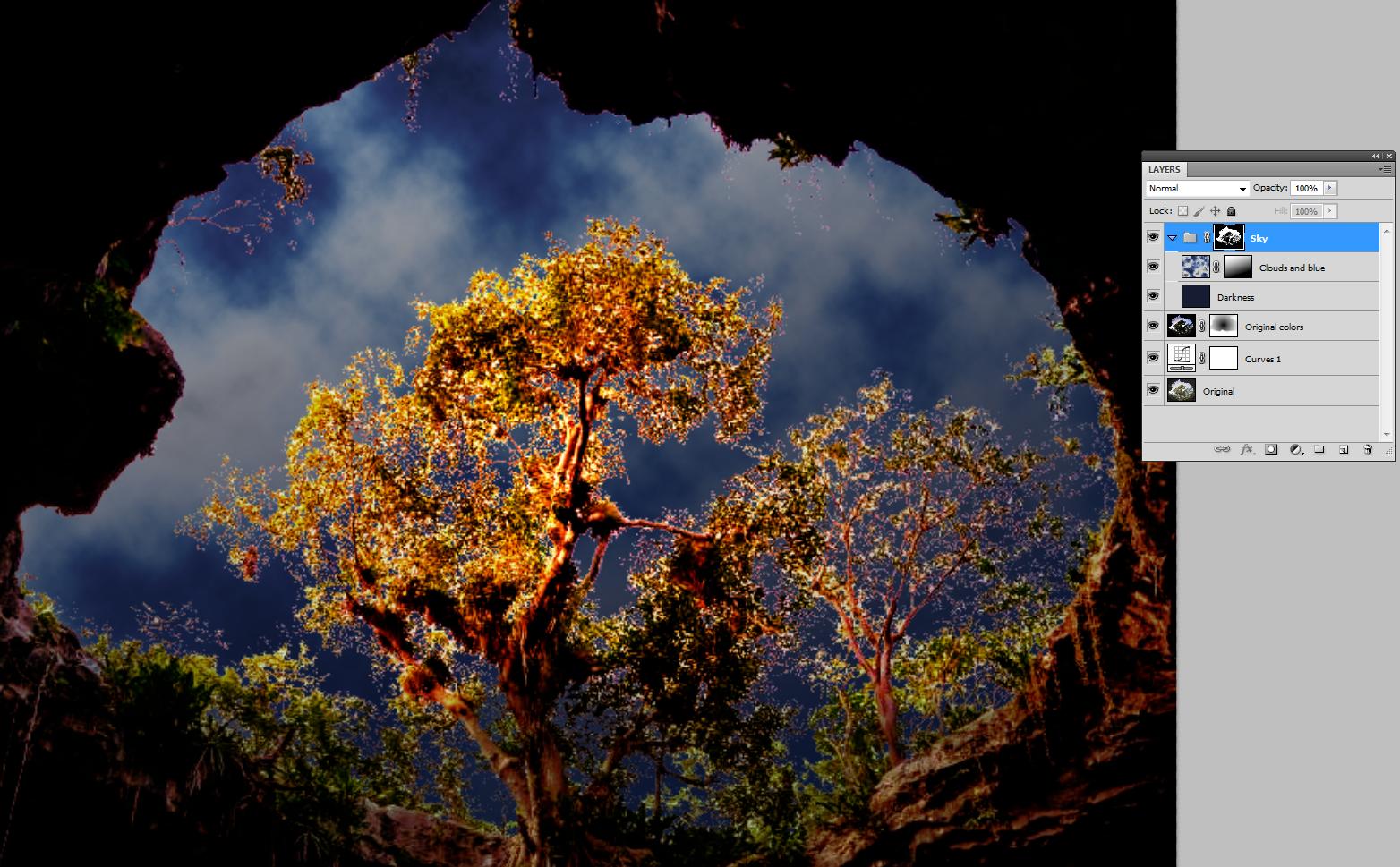 The mask of the sky is made by increasing the contrast. The sky must be masked, not the trees nor bushes. The fine details of them do not stand any shaving at the edges due the low resolution image.

The darkened sky looks offensive. In the next version it's opacity is reduced to 60% as a compromise: 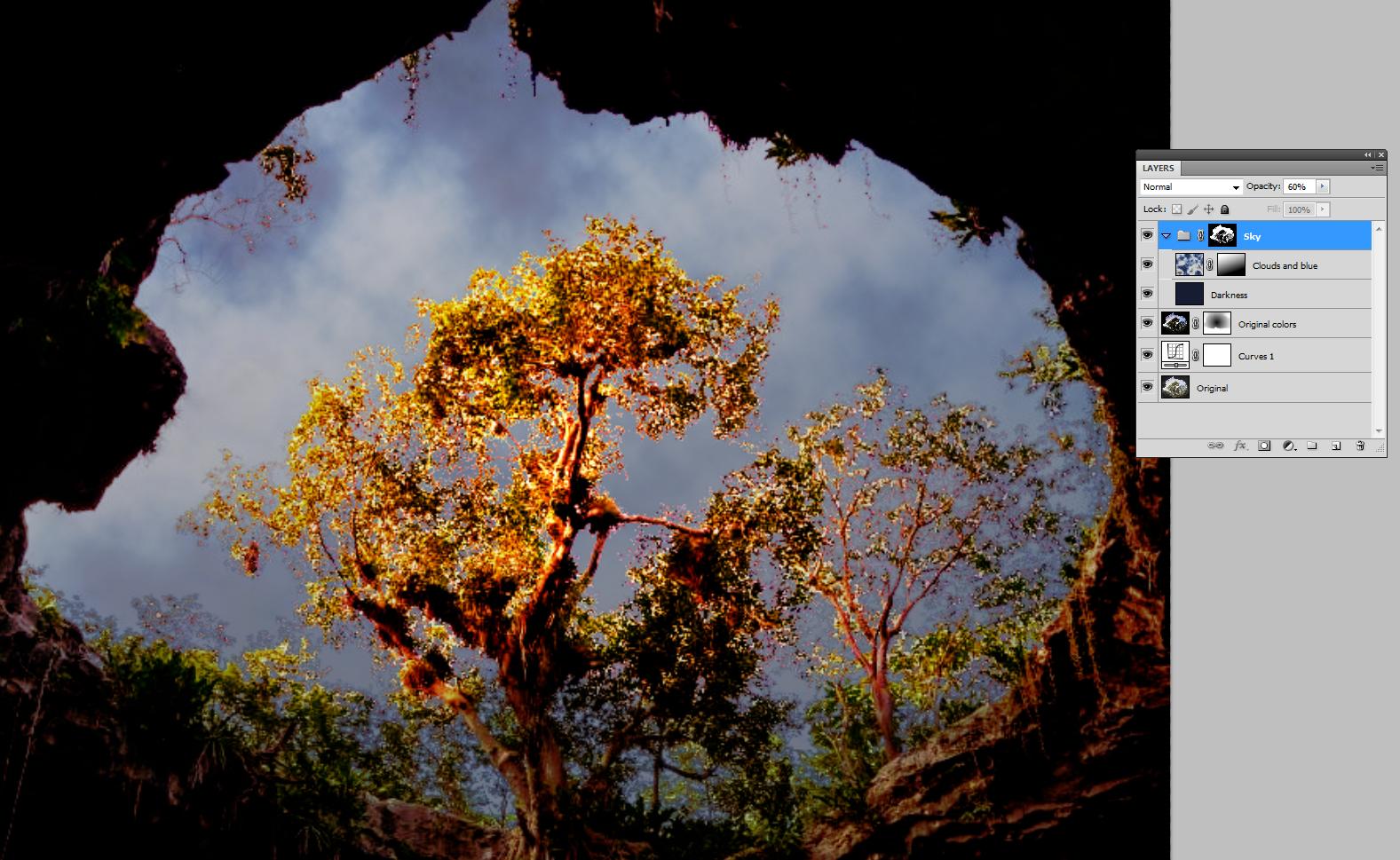 I would use somewhat similar adjustment layers which other answers have covered, but I'm doing many things "manually" for my approach. 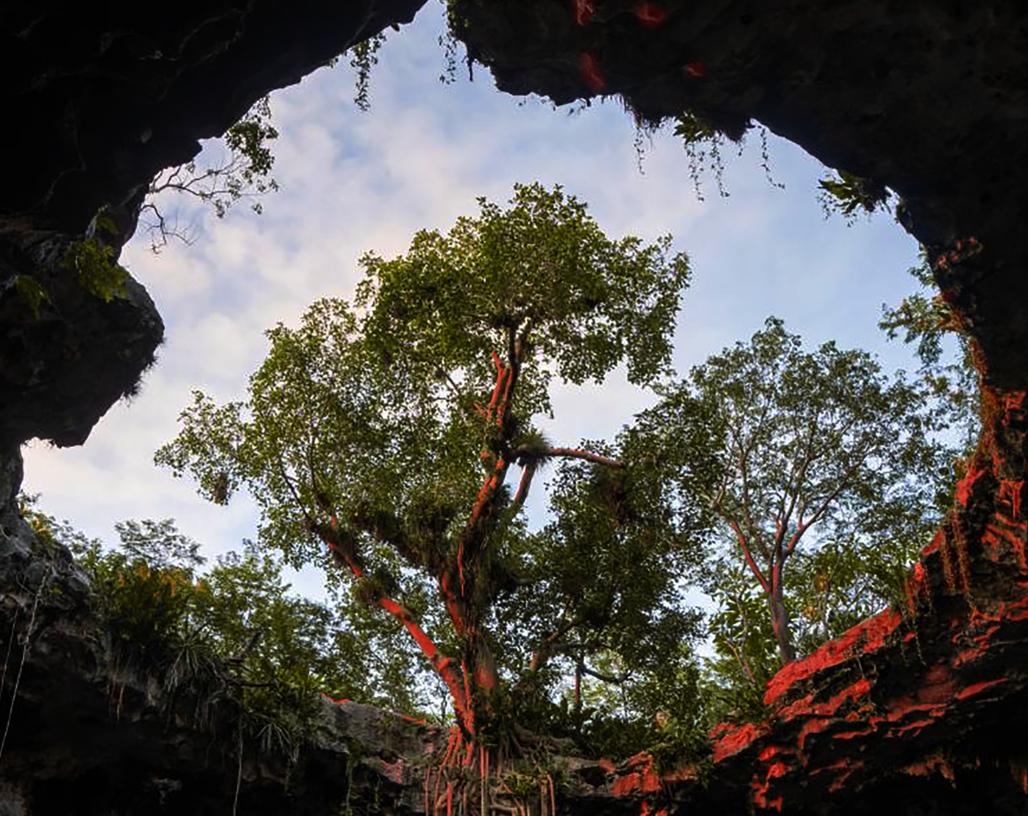 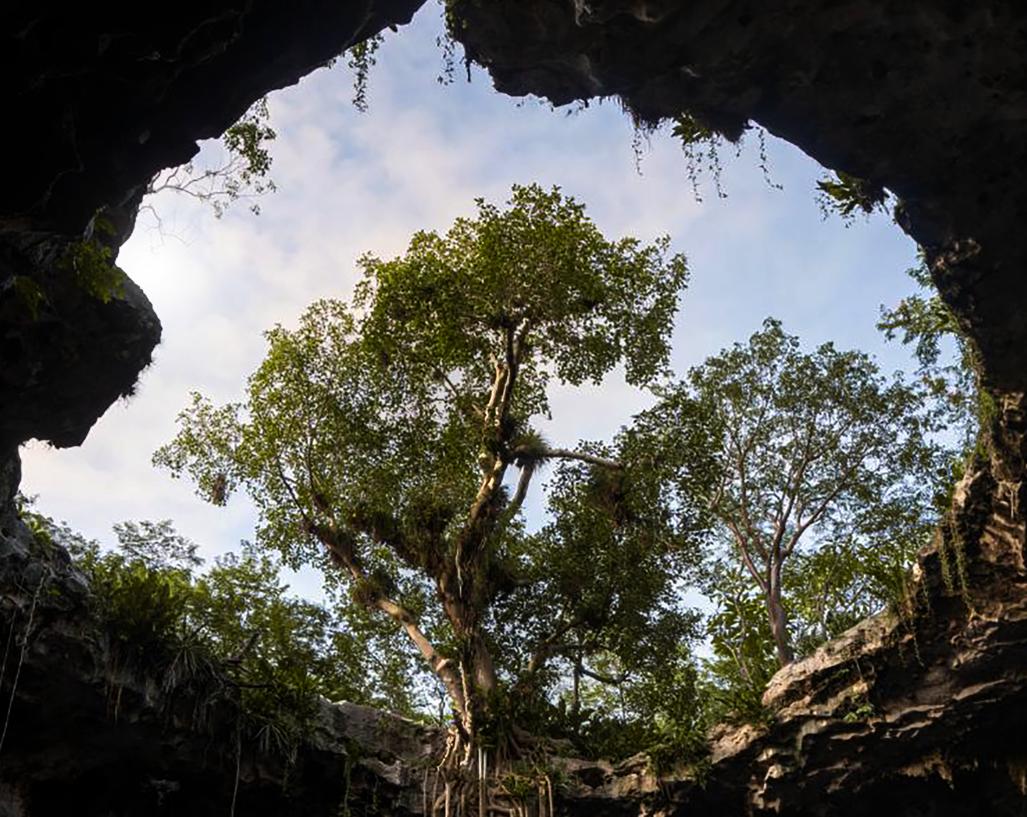 I don't know why but I feel the reference image you've given (with red/yellow sunlight falling on trees) is actually sunrise. So I have tried to make sky less blue and more red/yellow because often sky is colorful at the time of sunset.

Use Selective Color to lessen the blue color in sky. Use warm Photo Filter for making sky and other colors yellow/red.

Use a circle with radial gradient to make the left side of the photo a bit bright so it looks like sun is on that side. Mask unnecessary brightness since we don't need it on rocks. We just need it on sky and a bit tree leaves. 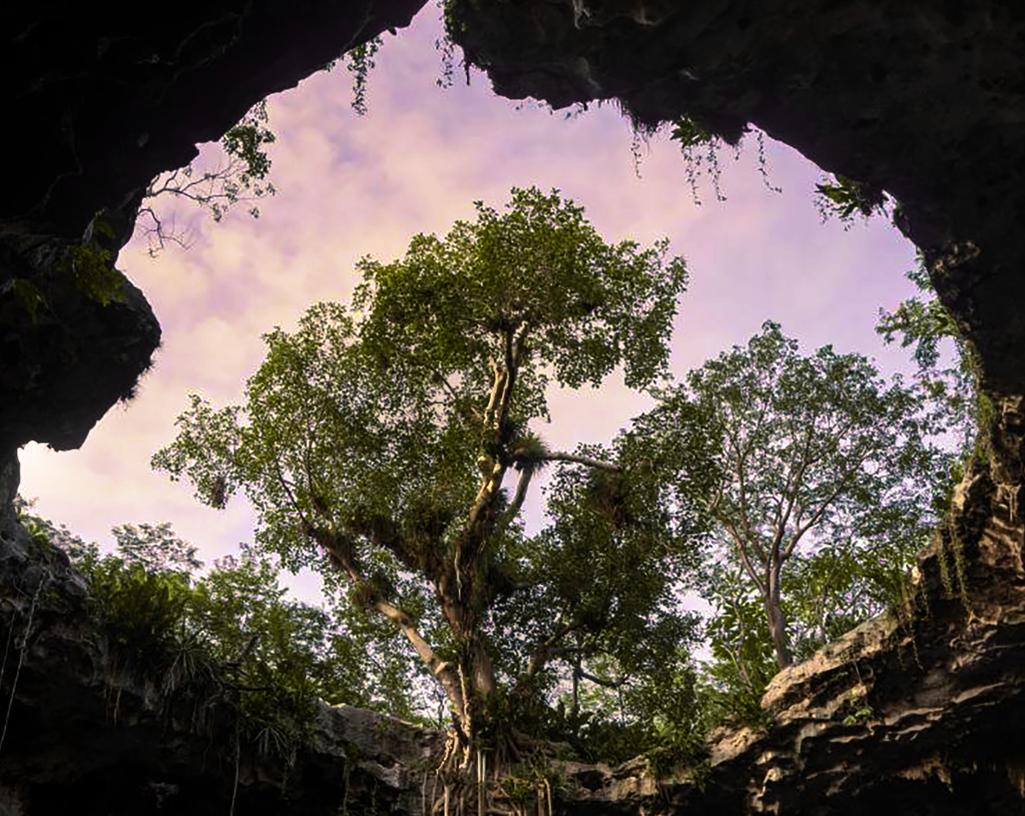 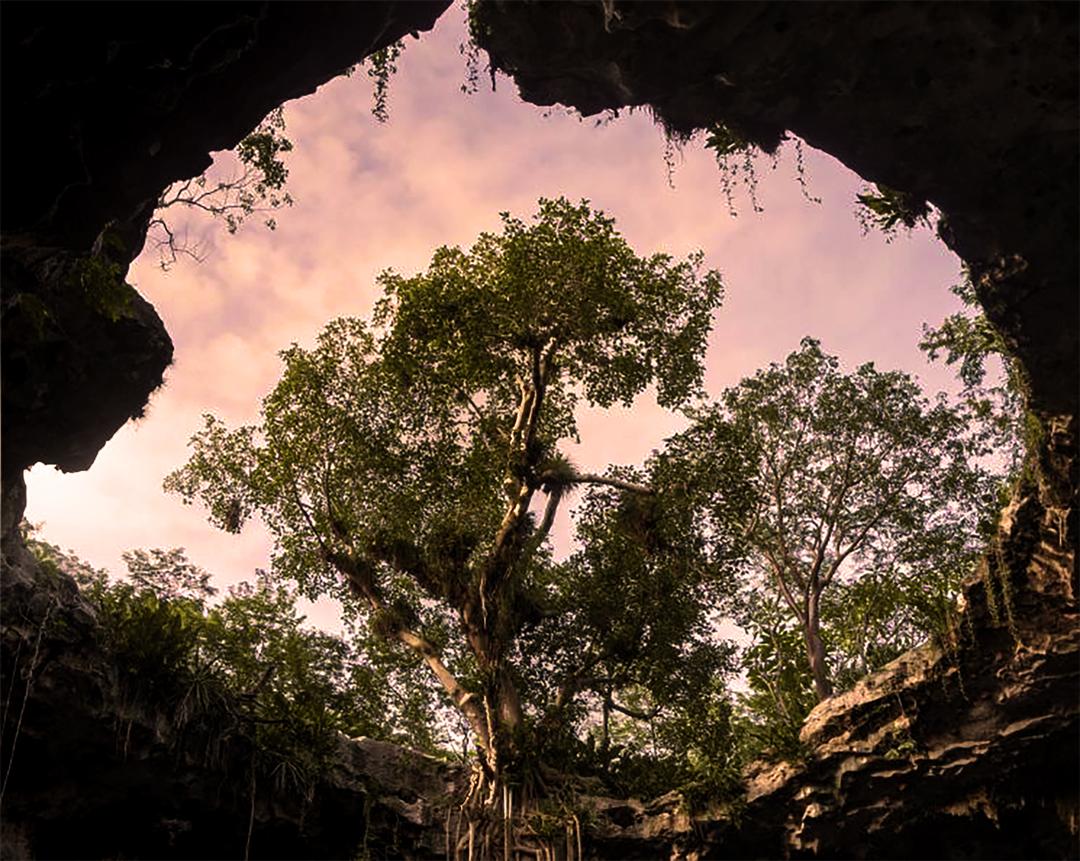 Do final adjustments overall, you can make leaves a bit more green and increase brightness if you think so. Note that I've applied some of the adjustment layers more than once and masked them wherever needed. 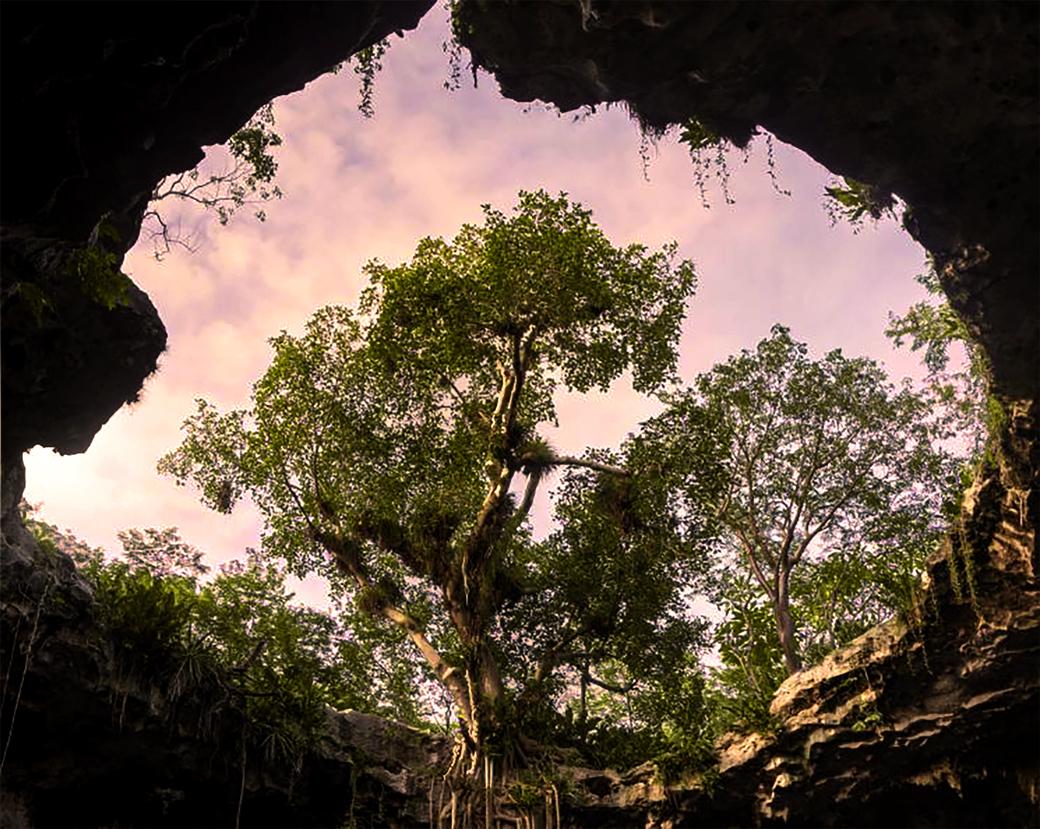 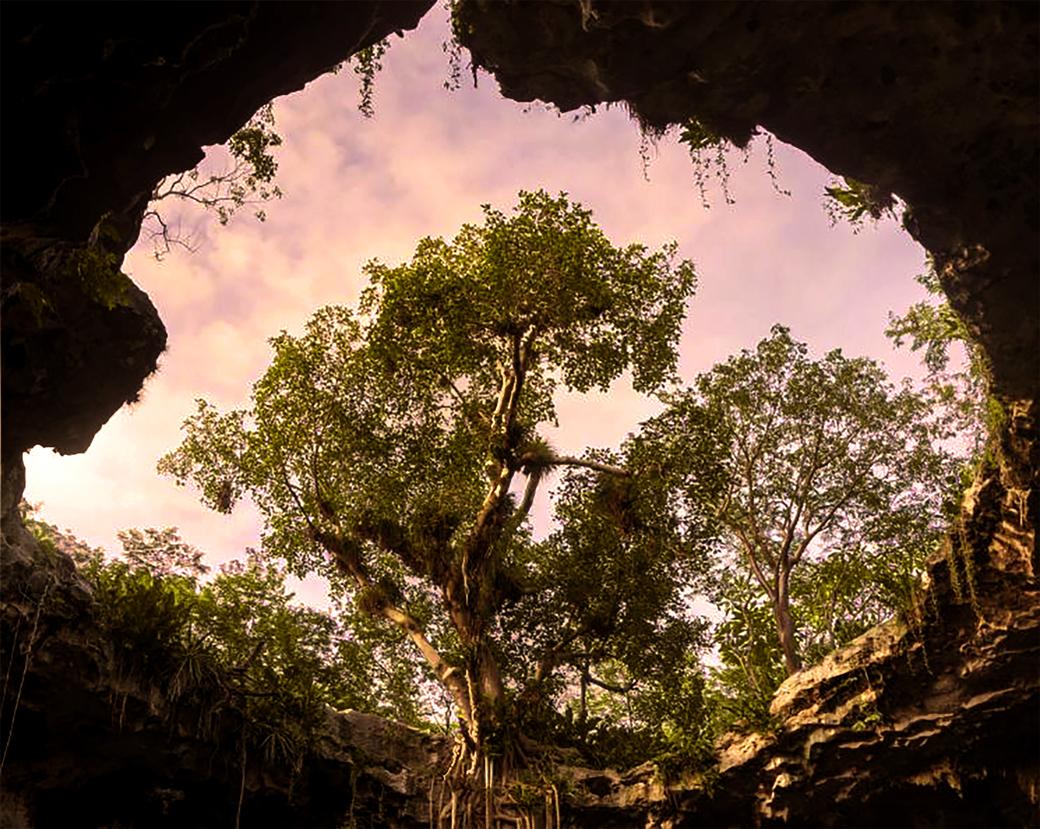 Not the answer you're looking for? Browse other questions tagged adobe-photoshop photo-editing adobe-lightroom or ask your own question.

15
How to draw “rays” in Photoshop?
4
Select background against trees / hair
0
Add borders to side of image
3
How do I create abstract light rays / streaks?
0
Can I update multiple text layers simultaneously in Photoshop CS6?
5
How to simulate realistic pencil blending in Photoshop, with texture?
0
Blending sunset tones onto an overexposed (white) base layer
0
How to remove this Rays
1
Photoshop CS5 Wrongly Shrinks Image Size on Place