How can we make this symbol in Inkscape?

Question: How can we make the following symbol in Inkscape software? The color is not important, it can be just default color. But the look (position of the letters, their layout etc.) is important.

I have gotten this far, using the following:

Disclaimer: I am not suggesting you do this to recreate the TEX logo, as I have no idea if you can legally do this. To be perfectly honest I wouldn't do it. After searching the web, I found this SVG here from the LaTeX stack exchange site. I've added this answer merely for educational purposes, since it's useful if you ever need to recreate a logo when you might only have access to a low resolution raster image.

Anyhoo, apart from the fact you aren't using the same font, I don't think you need to work with kerning to achieve something like this in Inkscape.

If you really want to get the font to look more similar, since it has already been converted to outlines, then you could edit them manually. For example editing the serifs on the T, squishing the E a touch, to make them look more similar. 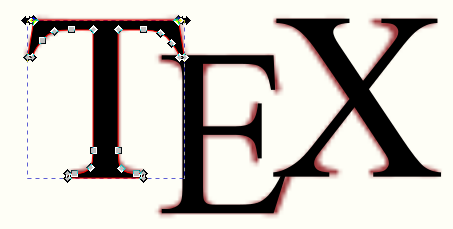 Here's the result with the same colour applied. 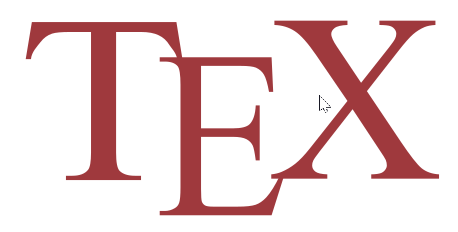 Given enough time and care, it would be possible to tweak it further to make it virtually indistinguishable from the original, say by tweaking the E serifs, thickness of the stem, changing the angle of the thin X crossbar, etc, etc.

10
Is it possible to convert PostScript to SVG? (Inkscape)
0
Snapping guidelines in Inkscape
2
Inkscape: how to draw good looking wires / cables (creating shaded / patterned paths?)
0
Is it possible to mask texture onto text using different layers in Inkscape?
0
svg rendered correctly only inside inkscape
0
Two fillings on the same object?
1
How to convert a group of two objects to a single path in Inkscape?
0
InkScape - How to make this image standout