What are the historical origins of Helvetica?

This issue of a typeface's heritage is of particular interest when attempting to pair faces. The nuances of related faces tend to harmonize well, whether that relation is grounded in history or the type designer. Since Helvetica is one of the most widely used faces of all time, there is value in understanding it better. It also has many visually similar kin who might tangentially benefit from this answer.

So, where did Helvetica come from? Most of us know that the design team consisted of Max Miedinger (executing) and Eduard Hoffmann (directing) at the Haas Type Foundry in Switzerland. But what was their inspiration/model? What era were they trying to envoke, if any.

Most importantly, was there a predecessor to their inspiration that might provide a better understanding of this family? Can historical reference inform a richer use of this ubiquitous typeface?

For the purposes of this question, let's consider Helvetica and Helvetica Neue as the same family. I know there are notable differences but I don't think they are of importance to this topic.

For a little background, the reason I originally posted this question was to provide some space to answer a comment on another answer of mine. The issue revolved around pairing fonts with Helvetica and I proposed looking to structurally and historically related faces: namely the clarendons. 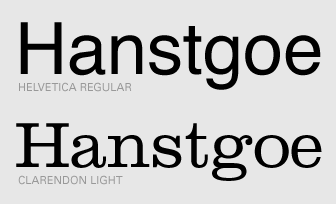 It seems odd at first but, if you trace Helvetica's lineage (and look at the two styles together) you'll see there is something to it. I'm afraid I haven't had much time to dig into my deep pile of resources but here's the Cliff's Notes version.

Helvetica was not designed from scratch

You can basically kill that idea with the name of Helvetica's genre: Neogrotesque. You can't be "neo" without an original. The originals in this case were the German grotesks and US/British grotesques.

Helvetica was developed as Neue Haas Grotesk in 1957 (it's catchier name came in '60). The creative director of the project Eduard Hoffmann, and the lead type designer Max Miedinger both credited Schelter-Grotesk as the inspiration. But the reality is, Germany produced a flood of types in this style during the late 19th century. In fact, the genre as a whole was so homogenous that one foundry (Berthold) was able to scoop up smaller foundries and collect multiple foundry type designs into the Akzidenz Grotesk (or 'Accidenz') master family. That family was collected and re-named in 1896.

In this comparison of a sign from 1843 and Helvetica, you can see that it's roots go back a very long way. (Thanks to Nick Shinn and this great Typophile thread for the image.)

Helvetica was developed in response to the surging popularity of Akzidenz (AG, as it is affectionately known) and Adrian Frutiger's 1954 masterpiece Univers, as a part of the International Style movement. AG was subsequently reworked by Berthold to bring it into line with the neo-grotesques by rationalizing some of the charming individuality that existed between weights (which were actually different fonts in the first place).

What about those source designs

So the connection to the 19th century grotesques is well-documented as well-known (at least among those who care). And the style is not all that divergent in the reinterpretations, especially in the case of Helvetica (and Folio, from the same period). Here you can see how far the similarities go (Helvetica being just a bit uglier than it's predecessor ;) 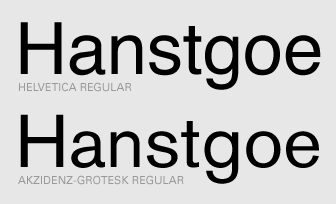 It should then follow that Helvetica could be closely tied to the origins of it's origins. That's a long story, but let's just say that the sans serif had a very long history that didn't really develop until the second quarter of the 19th century.

Caslon's very geometric sans caps were the earliest development of the era, appearing around 1815(?). These reductionist, comparatively mono-weight designs were closely tied to the egyptians (slab serif). There is an argument to be made that the early sans designs were simply egyptians with their slabs sliced off. Here's an example from an 1815 Fann St Foundry specimen. 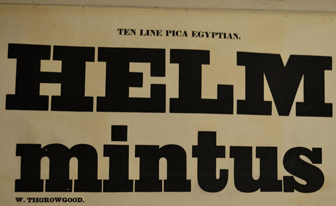 This is where Helvetica's ancestors enter the stage. If you buy the idea that "Industrialized" serif faces led to egyptians which were further rationalized to achieve early geometric sans faces there is an interesting fork from this point. The de-seriffed slabs were fine-tuned and nuanced to produce early grotesk faces, which had a little more humanity to them. At the same time, the egyptians themselves were given a little life by bringing back some of the variation and serif bracketing from the old faces resulting in the Clarendons! This was mid-19th century.

That is the long story behind why I freely recommend the pairing of clarendons and grotesques. When faces are built on the same underlying geometries and influenced by the same historical circumstances and technology, you might just find beautiful possibilities. Even with a face as ugly as Helvetica ;)

But what was their inspiration/model? What era were they trying to envoke, if any?

Haas set out to design a new sans-serif typeface that could compete with the successful Akzidenz-Grotesk in the Swiss market.

And was there a predecessor to their inspiration that might provide a better understanding of this family?

Originally called Neue Haas Grotesk, its design was based on Schelter-Grotesk and Haas’ Normal Grotesk.

Unless I misunderstood you, the short section on history on Wikipedia seems to answer exactly what you are asking.

To add a bit more:

Other fonts it is compared to and said to be inspired by include:

Not the answer you're looking for? Browse other questions tagged typography typefaces history font-design or ask your own question.

3
What font to enhance 1-2 words within block of Helvetica/Arial?

24
What are the differences between Helvetica and Arial?
23
What characters are good to start with when designing a typeface?
5
What are great examples of the influence that design has?
79
What is so good about Helvetica?
14
What are the origins of terms “em” and “en” as typographic units?
11
What are the origins of the commercial minus sign (⁒)?
3
Are there fonts whose licence allows me to edit them and then resell the edited version?
15
Helvetica: trailing leg in lowercase “a”
1
Why is there none of the lighter weights of Helvetica Rounded?
4
What does “Pica” mean in the name of a typeface?