Does anyone know how to create this kind of pattern design in Illustrator or Photoshop?

I tried colour blend mode to create a gradient like in the picture, in Illustrator and Photoshop too, but the output was not like that. If anyone knows how to create this kind of design in Photoshop or Illustrator, please help me...

To create such organic looking shapes, it's IMO best to use some randomness as a starting point for your design. Thankfully some design tools (e.g. Photoshop) come with a handy "Clouds" effect, which renders some random noise, that looks initially a similar to clouds:

Now that you have some dank random light and dark areas on your canvas, your next step is to get them to look a bit more like the organic "blobs" in your reference images. To do this:

Now, admittedly, we did get the result to look a bit more blobby, but the contrast is low. So what we want to do next is:

Now this is starting to look a bit more like blobby! Unfortunately as a result of cranking the contrast to max. so many times, the blobs don't have enough grey-levels to be smooth and organic looking.

Now the blobs are a bit too blurry again! Thankfully we now know what to do. Just repeat step 3. until it starts looking like your reference images again.

Here's what it looks like for me after 5 contrast adjustments: 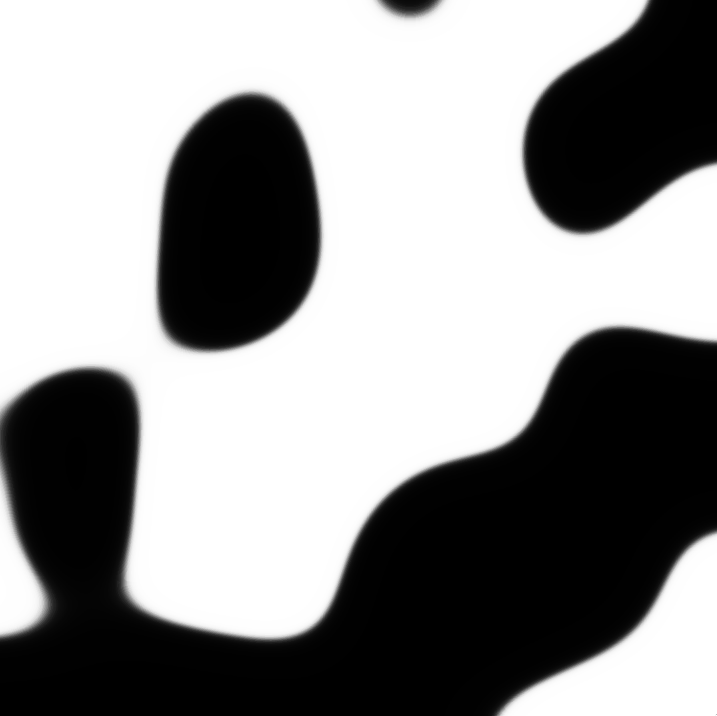 Basically that's it.
Now of course at this point you can freely repeat the whole contrast/blur cycle again with your blob layer if you wish to adjust it some more.
And playing with different blending modes on the gradient layer can give you some more cool effects.

Also, keep in mind that by just inverting the colors in your blob layer, you can swap the places of your blobs/gradients, like so:

And there ya go. Organic looking blobs embedded in gradients.

*: Or really any tool that you want to use to fiddle with the contrast. Levels, Curves, B/C, etc. all works.

If you follow your own link and scroll a bit down, it's explained and exemplified how the patterns were made.

It seems that the patterns are in fact closeup photographs of Poison dart frogs.

So you need to find some free images of poison dart frogs online. Like this one from Wikimedia Commons (by Ltshears and in the Public Domain). 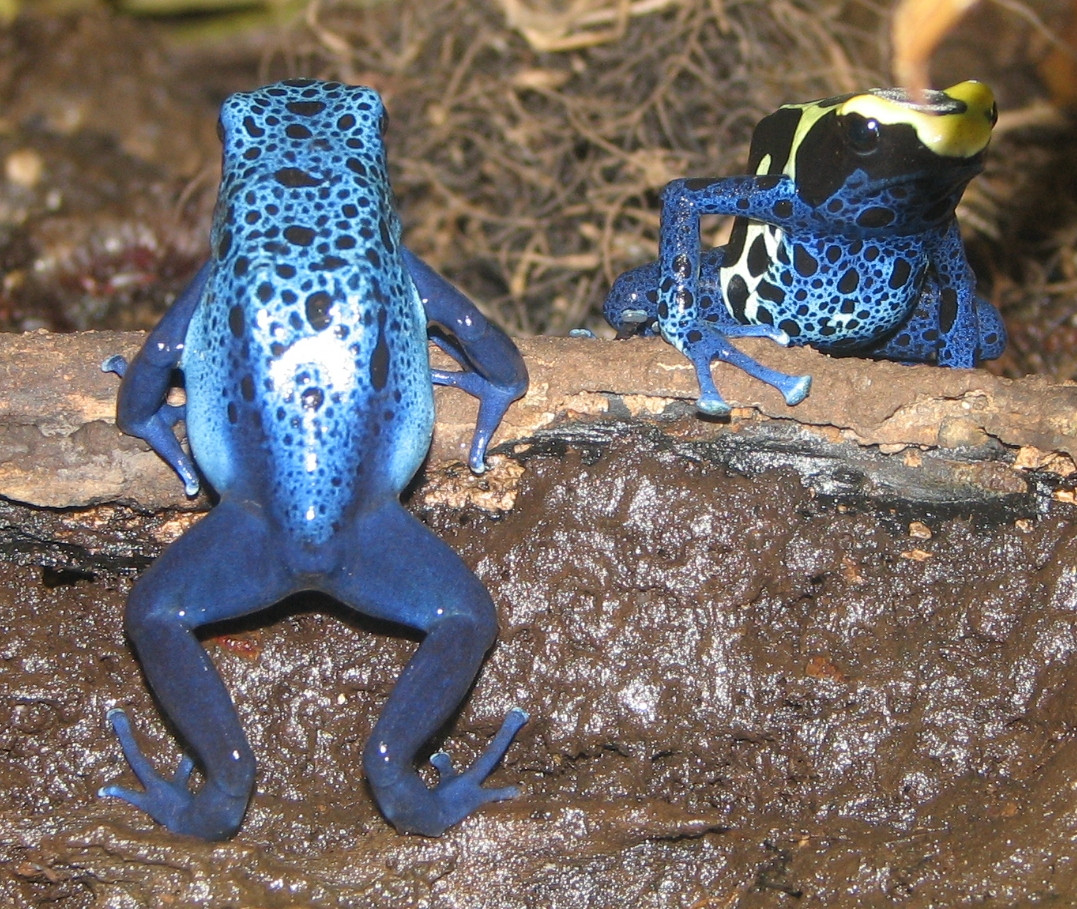 It's easy to find a crop which has that pattern you like:

Scaling the image up, blurring, correcting the colors and adding some noise gives a little better result: 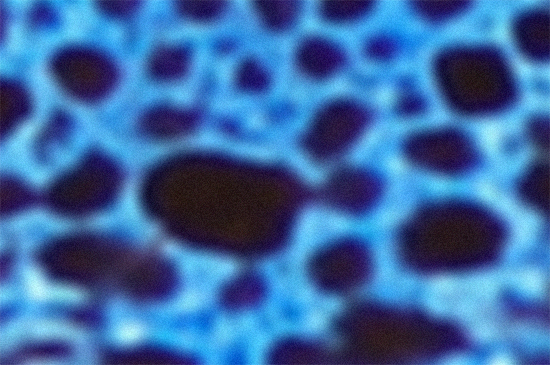 The pattern is there, but the quality of the image leaves a lot to be desired. I believe the examples you link to were made using high quality closeups which probably have been manipulated a bit in Photoshop afterwards. It's hard to tell since all we have is images of seemingly offset printed materials.

You need a high resolution image of a thin piece which has holes. You can draw it as a vector, but that's said already in an earlier answer, so I try something else.

This is a photo of a commonly used piece of not so organic material. It had white background and unfortunately only low resolution - good enough for webshop. I lifted the width to 2000px with Smilla Enlargener (it doesn't make borders blurry, freeware) and erased the white background:

All surface details are useless. They vanish by changing all pixels to 50% grey with Curves:

Layer spare is a copy of the original.

The well machined geometric form probably is not wanted. It vanishes by applying Edit > Transform > Warp or Puppet warp and Distortion effects: 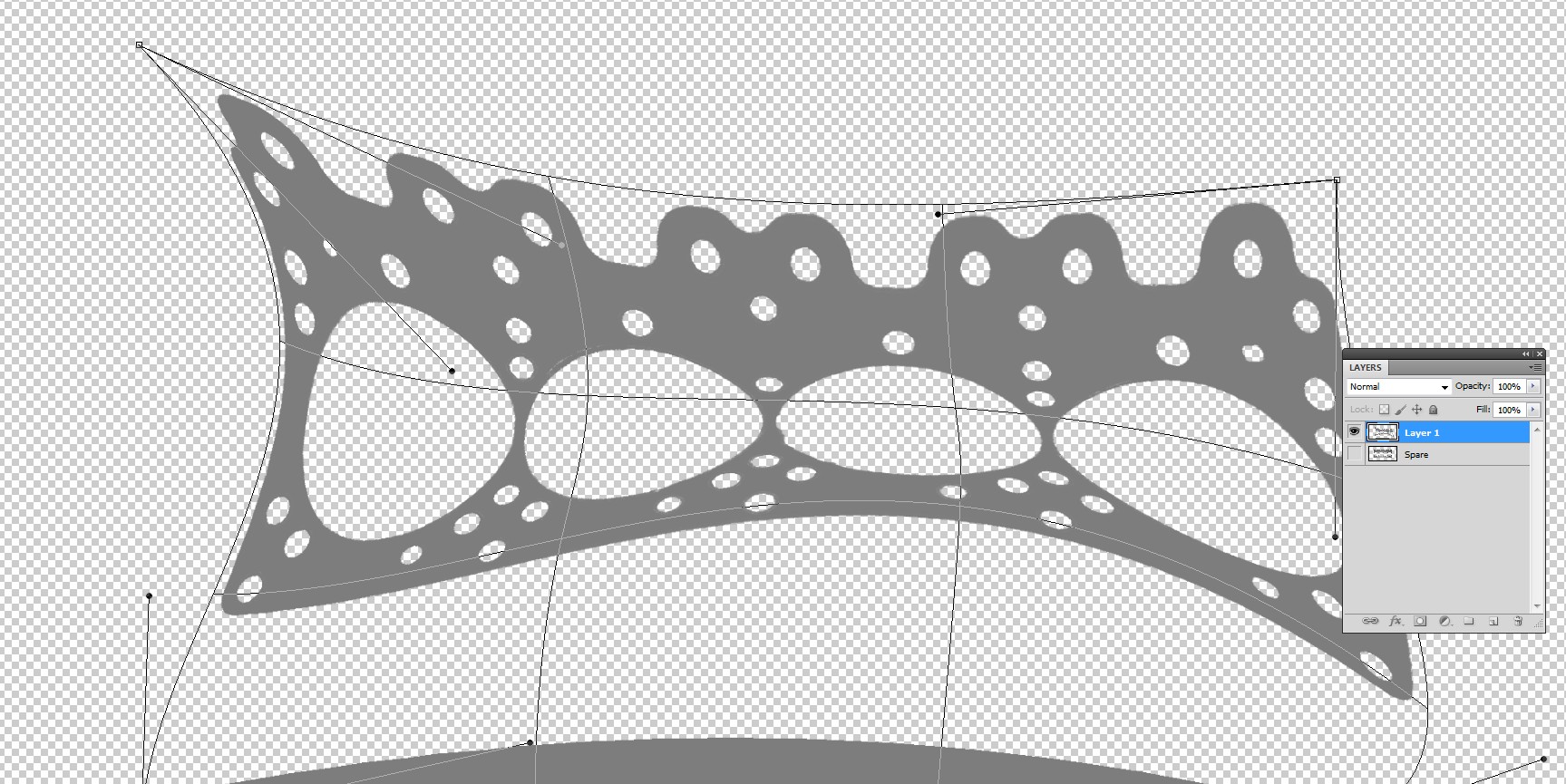 Warp is easy, but Photoshop's distortion effects are difficult to control. I inserted a slight Pond ripple. It created a couple of holes and blurry edges which had to be fixed manually.

Illustrator's Envelope Distort with Mesh would give more freedom. It works well also with photos. Transparent background stay in Illustrator if one opens a photo file. Pasting directly to Illustrator removes the transparency. See NOTE1!

Some 3D light and color are useful. I used Photoshop's Layer styles as a shortcut. Manual painting would give full control, but Layer styles are easy. This is Bevel&Emboss: 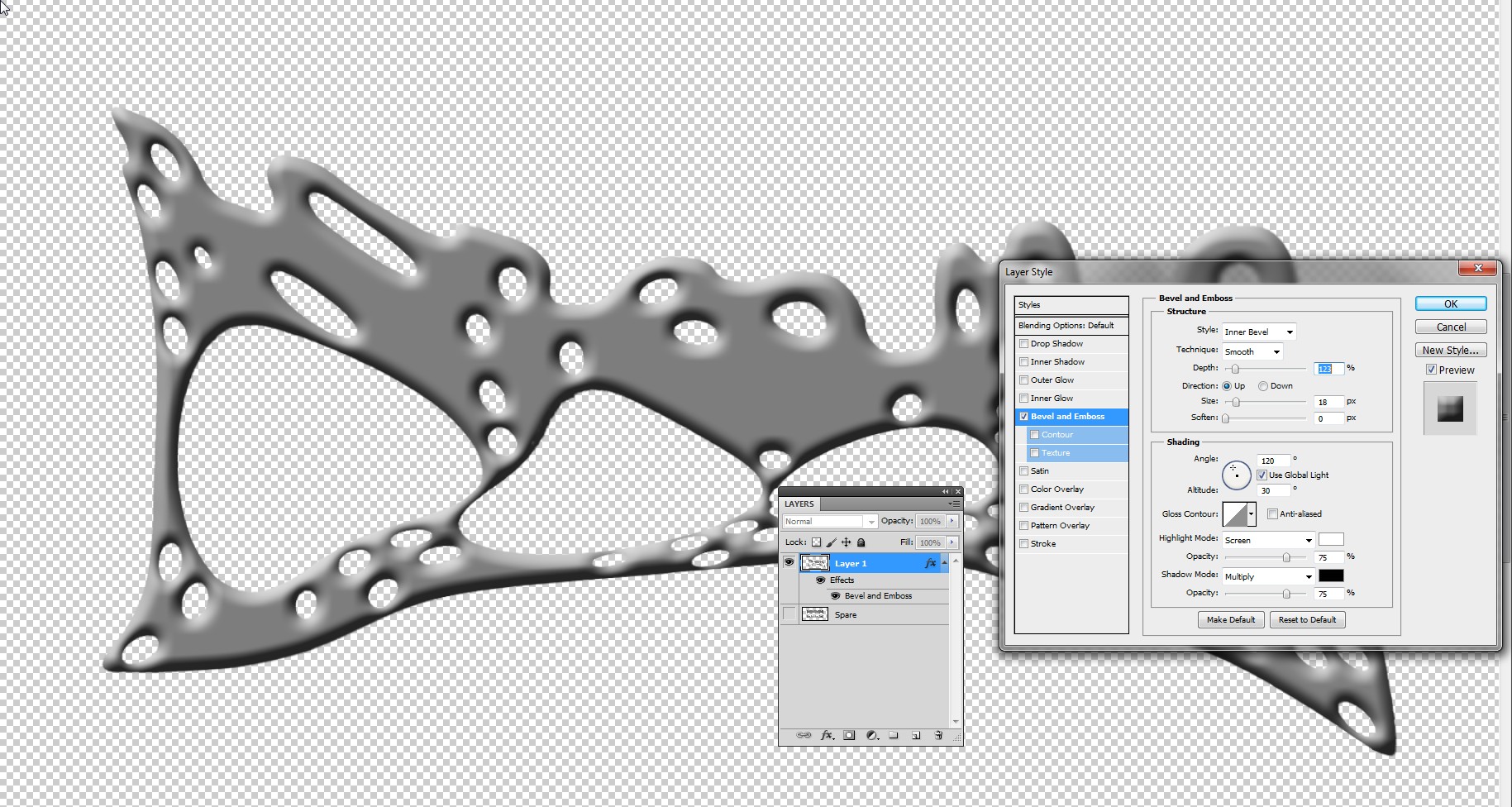 Layer style Color Overlay made it blue. In the next image a black background is added and the image has got perspective distortion (Edit > Transform > Perspective and Scale)

NOTE1: Instead of using a photo of cylinder head gasket or other object which has holes one can as well make a selection, fill it and make holes by making more selections and deleting. If the selection forms are drawn irregular from the start no warping nor distortion are needed.

One can get smooth selection edges with Select > Refine Edge > Smooth. Apply no feathering, the edges must have high contrast. You can always make them less sharp later if you find it useful.

ADD: If you want a pattern which can be used to fill areas you can start differently. Here's a 100x100 pixels image which is filled with yellow and freeform black shapes are drawn with a pencil. The idea was to have one big black block and a few smaller ones: 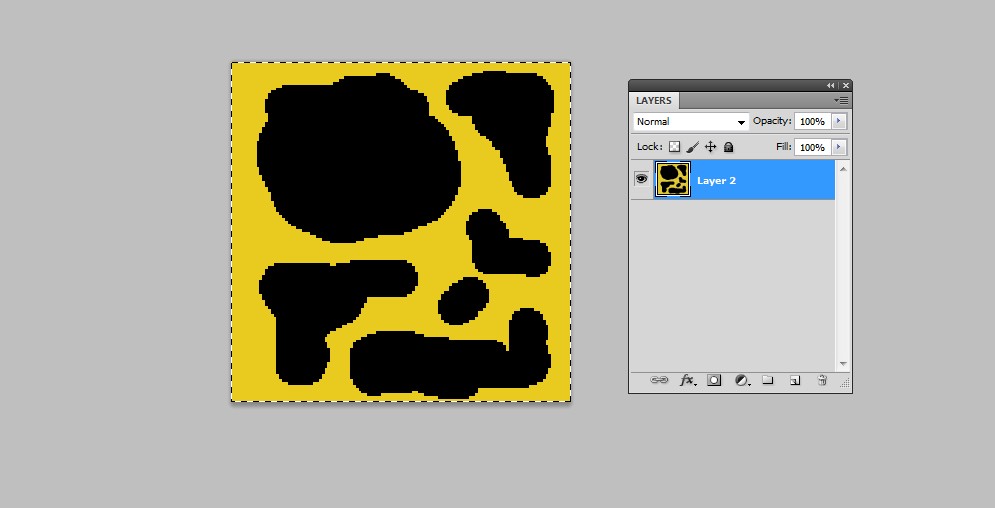 The edge zones are about 50% thinner than the yellow areas between the black blocks.

The image was selected, defined to be a pattern (Edit > Define Pattern) and a bigger rectangle was filled with it by using the Pattern Stamp: 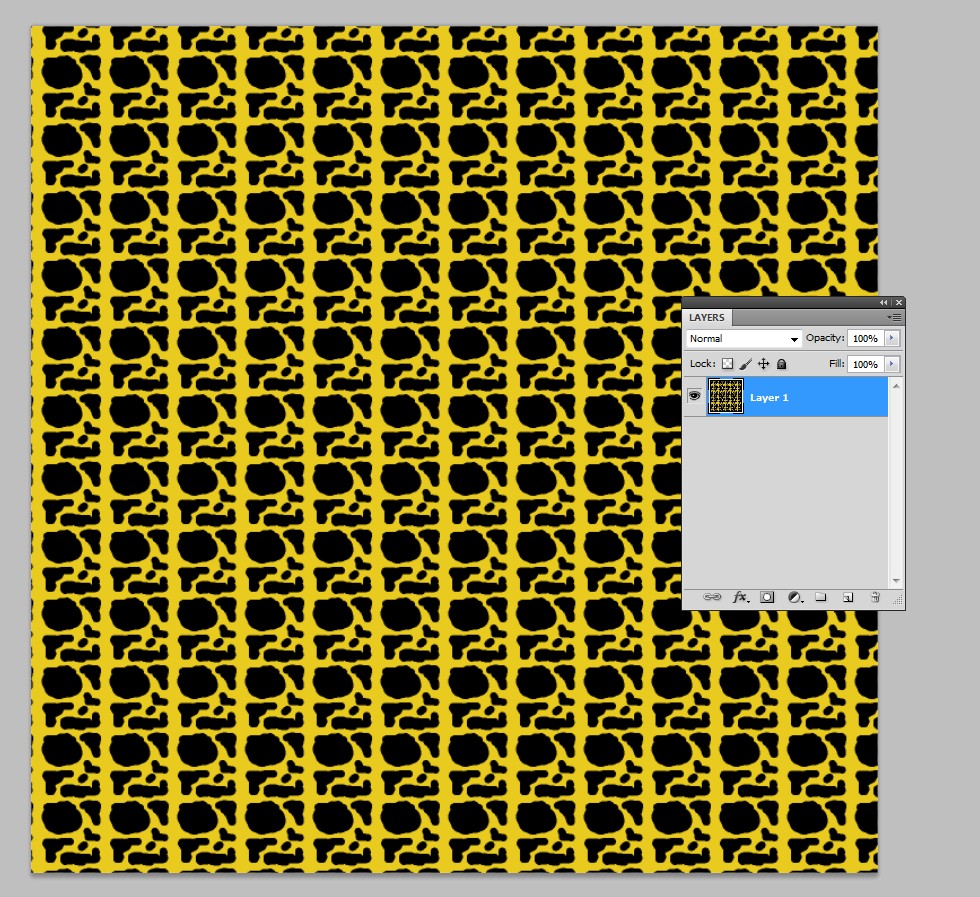 That's too regularly repeating pattern when compared to your examples. But it can be distorted with Filter > Distort > Waves: 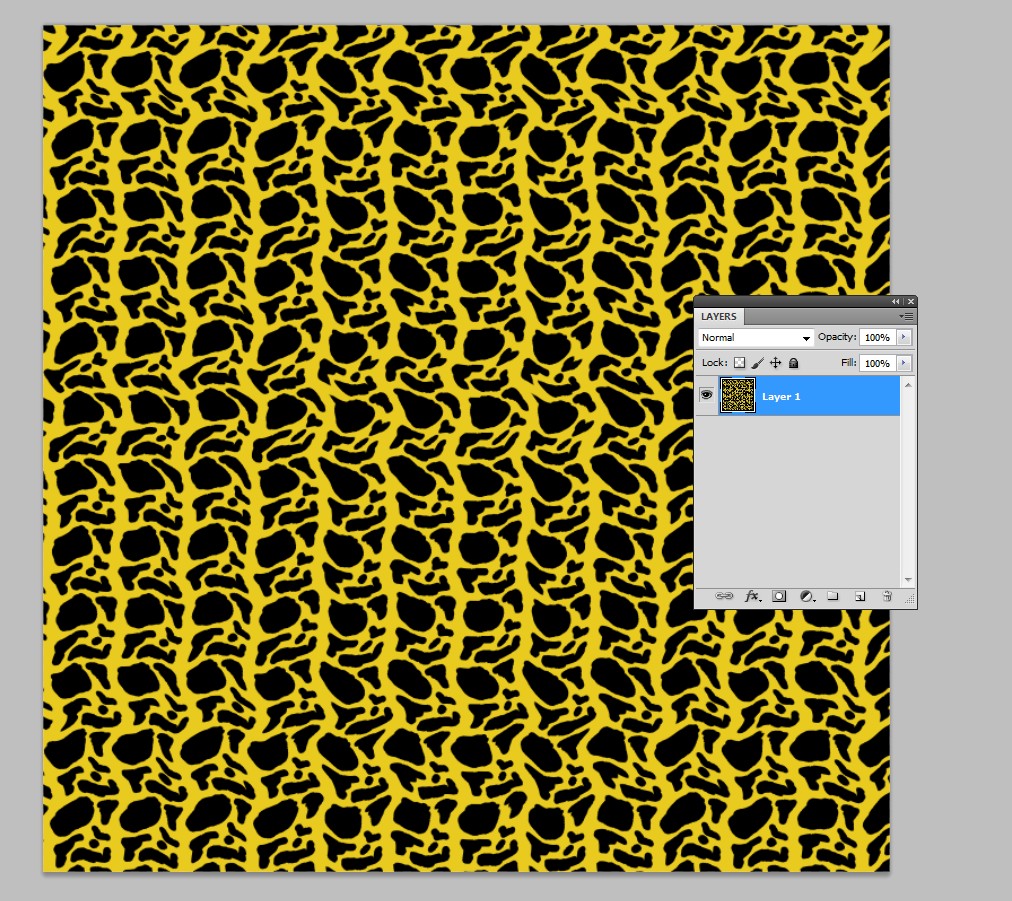 To test how it works the result is mapped with 2 a little different scalings onto donuts in a CAD program: 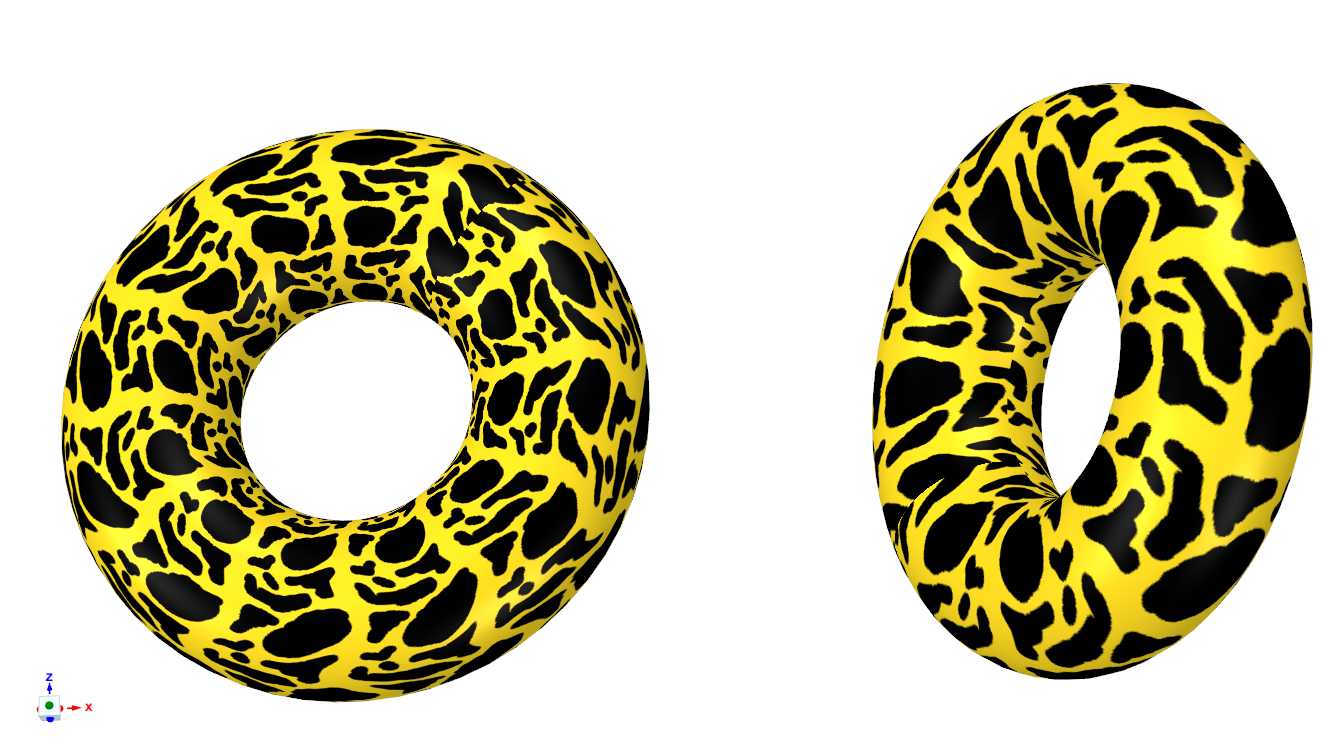 Just to show the difference here's one donut with the regular pattern which is not distorted One can see at a glance it's repeating. 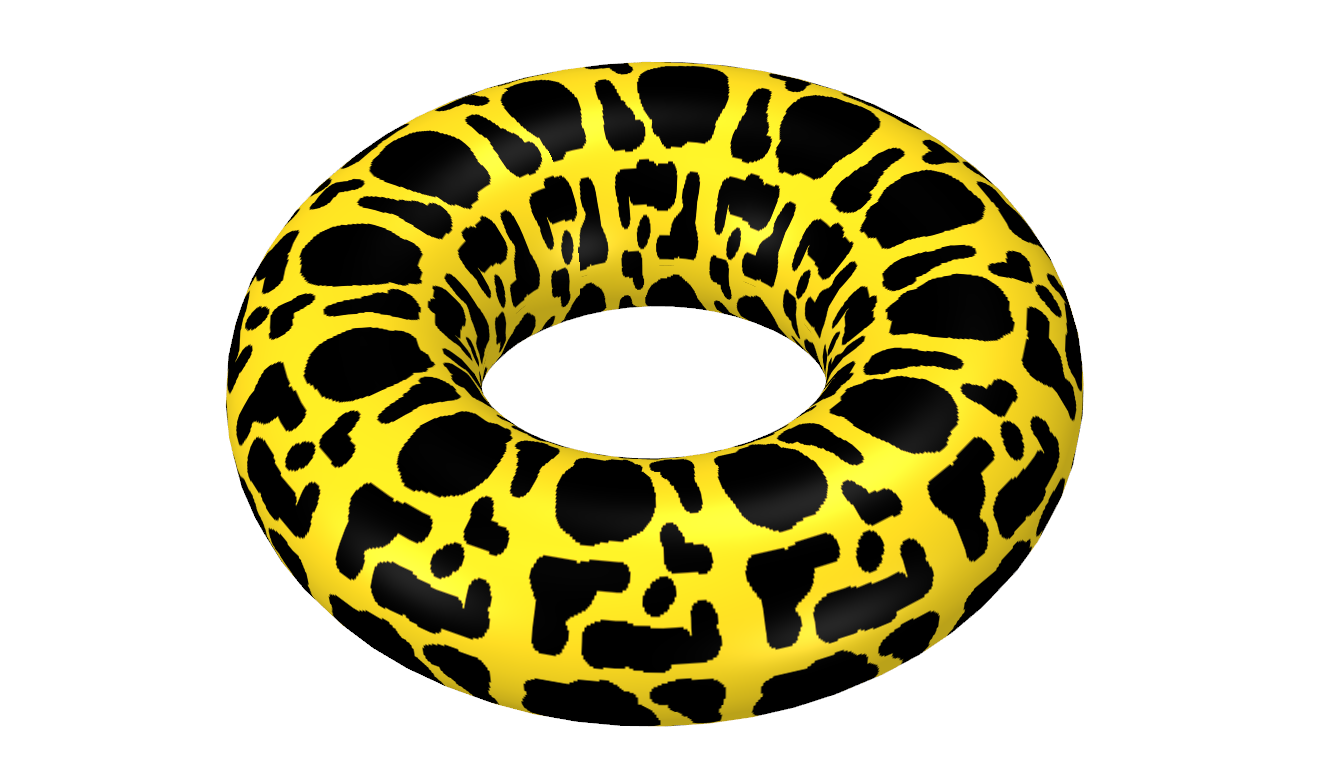 In Illustrator you can use the Appearance panel to apply an opacity mask to a raster image. Here's how you could do it: 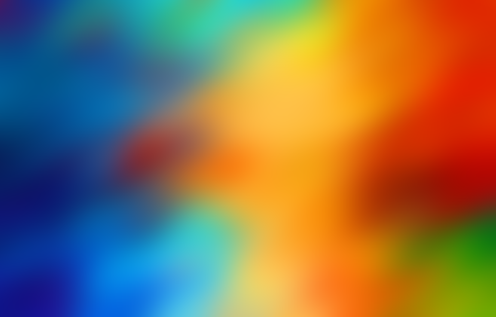 So now there is a group, and under the group is the raster image. 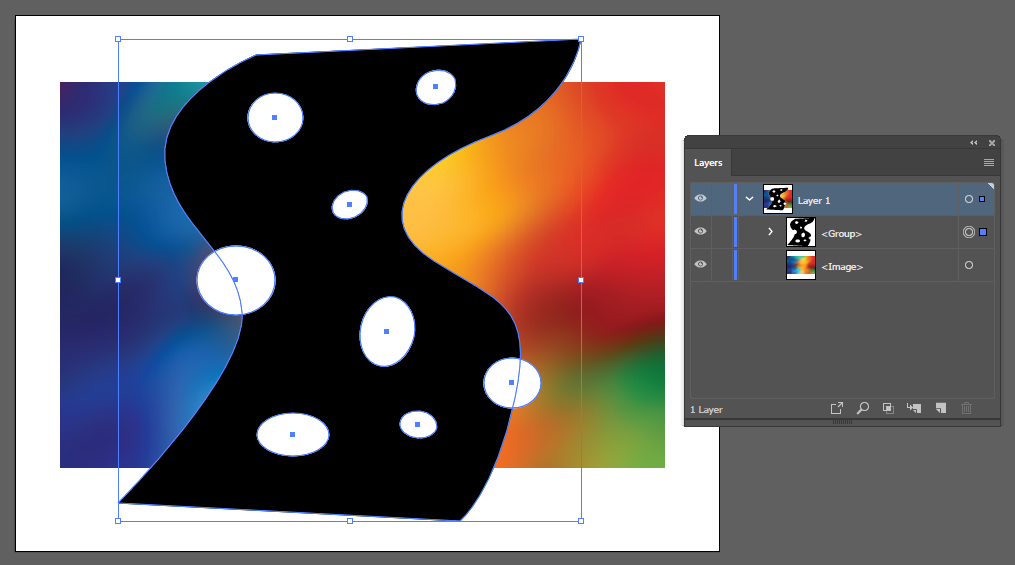 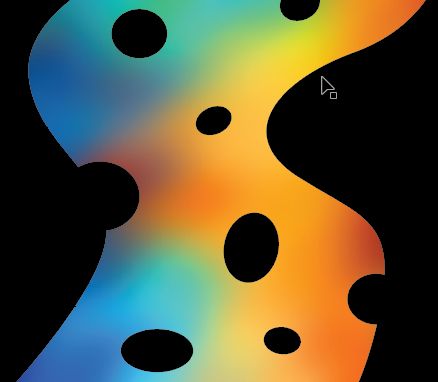 If these shapes are too regular for you, it is possible to use Effect > Distort and Transform > Roughen to the artwork before creating the mask. 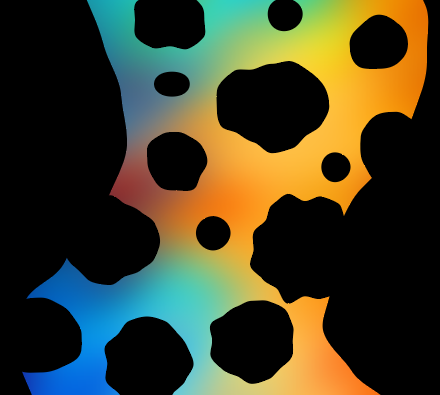 You can combine results from both Illustrator and Photoshop to create things like this. 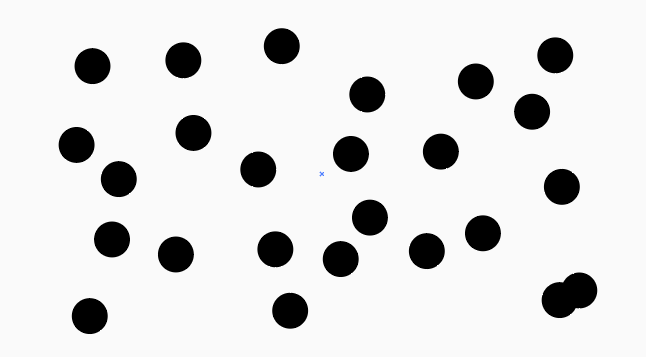 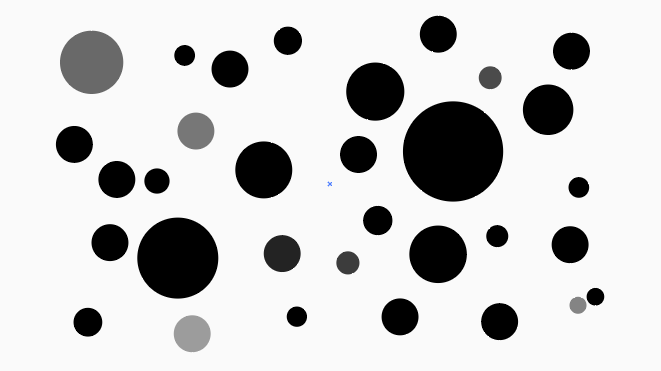 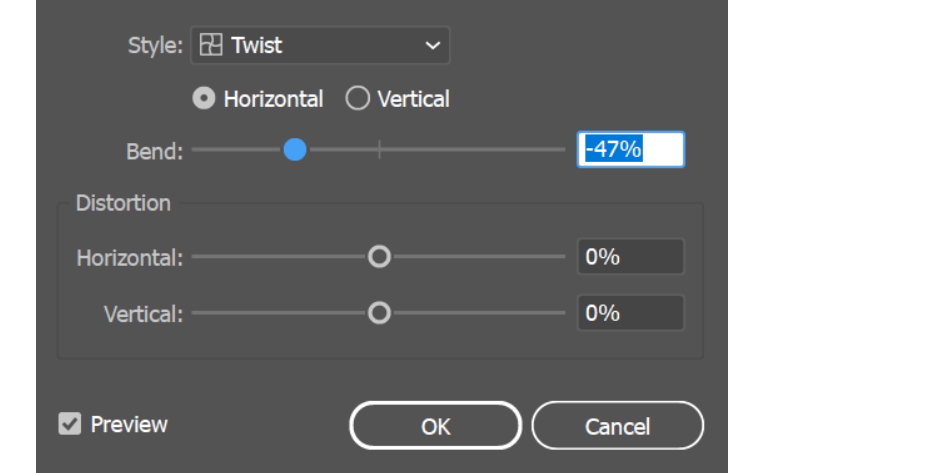 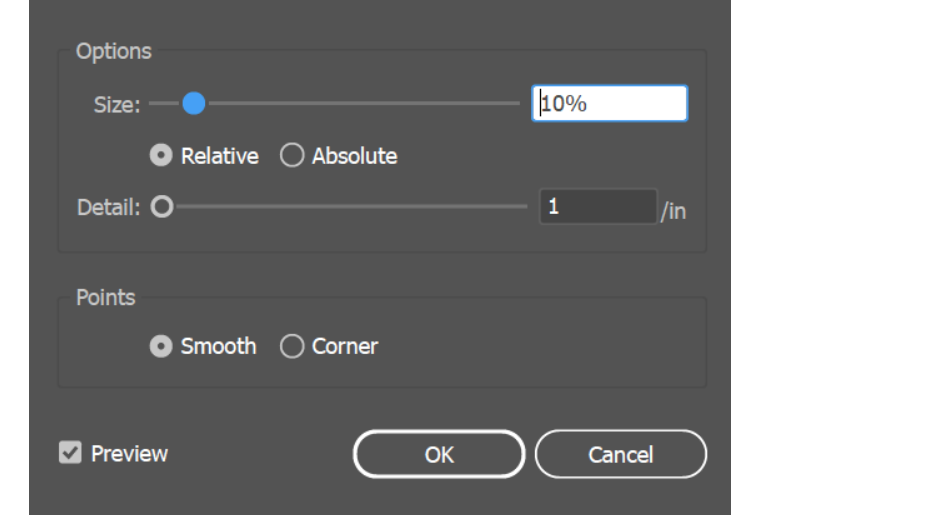 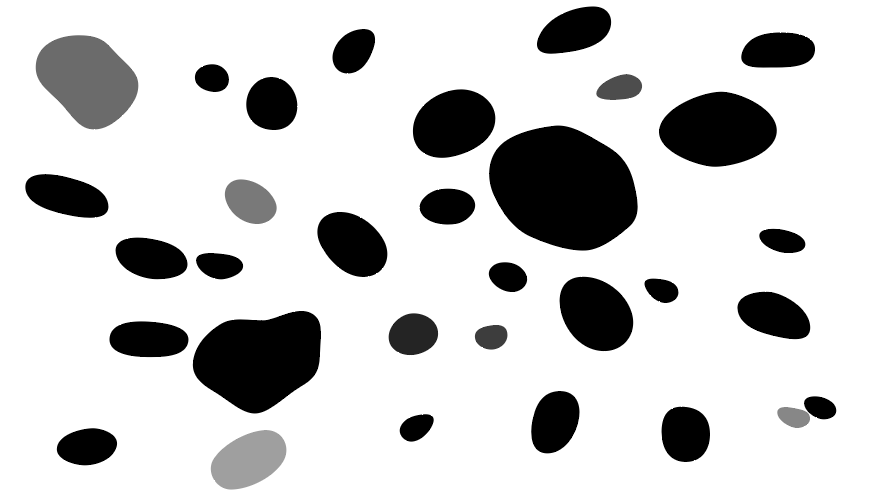 At this stage, I'll paste everything in a Photoshop document. It will create a smart object. It would be our pattern/shapes layer. Then: 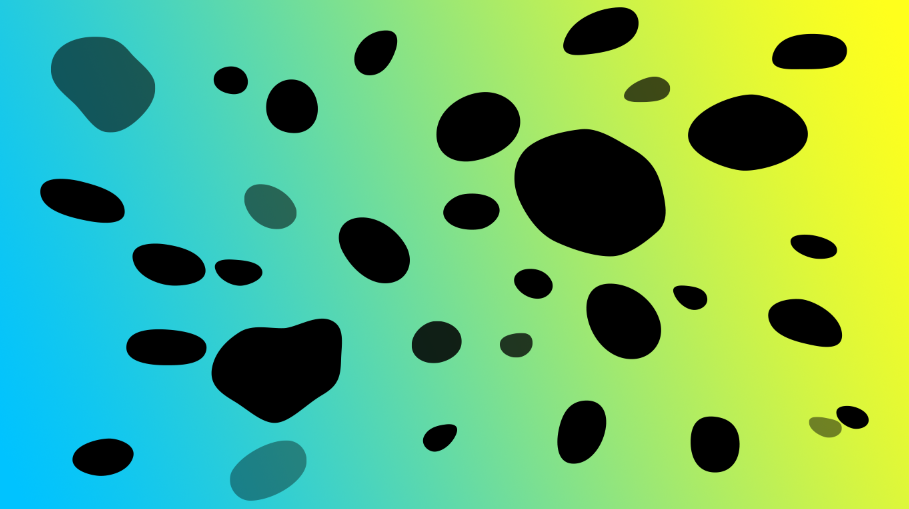 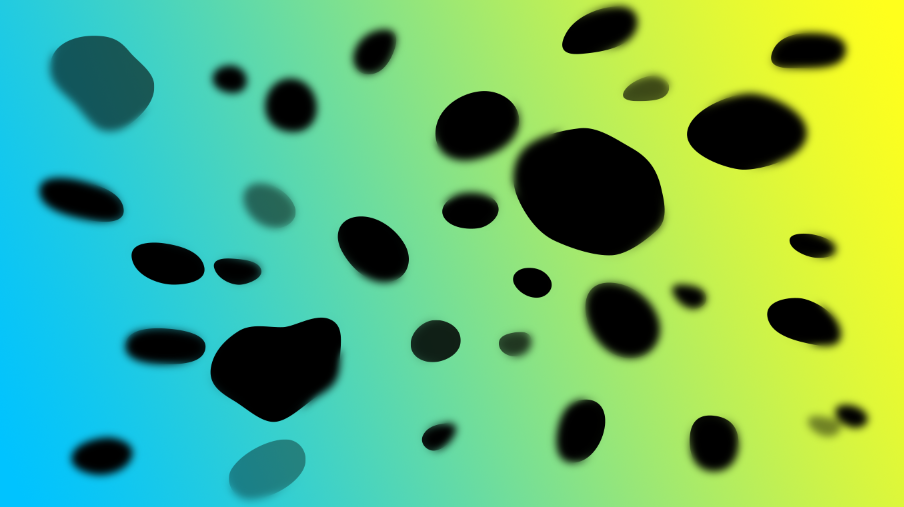 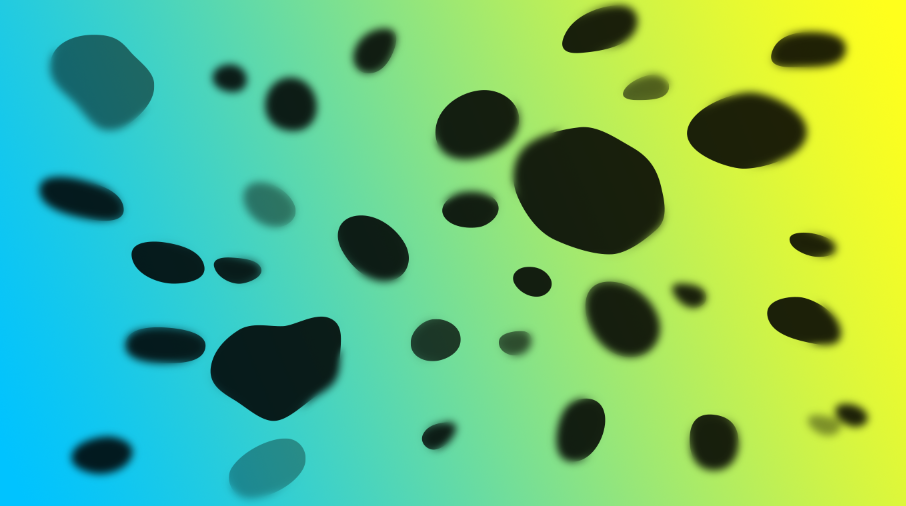 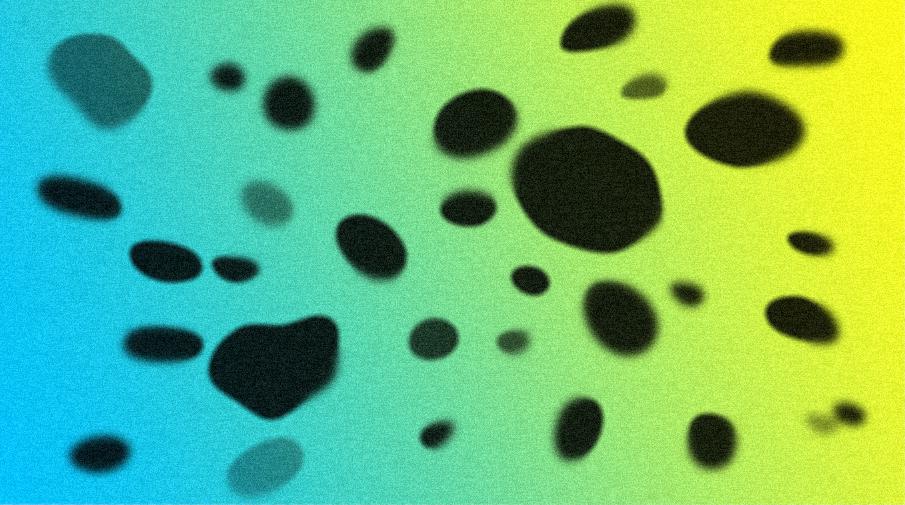 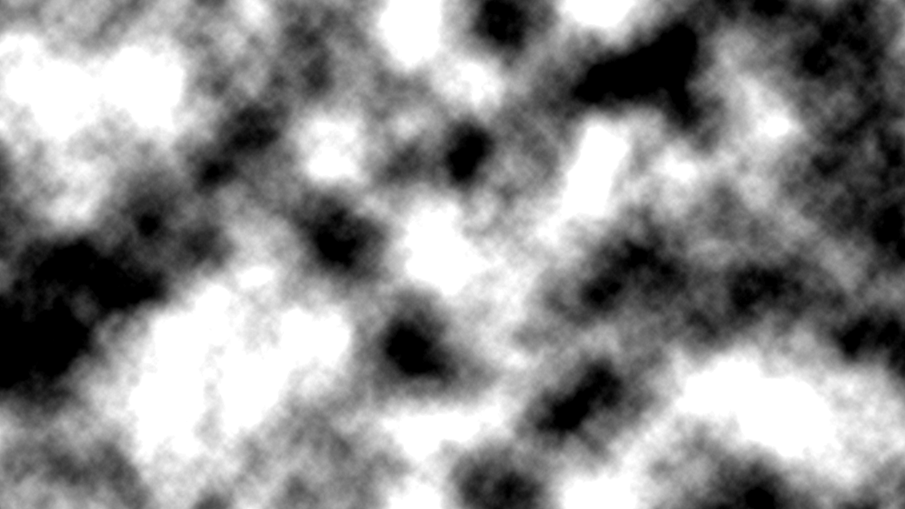 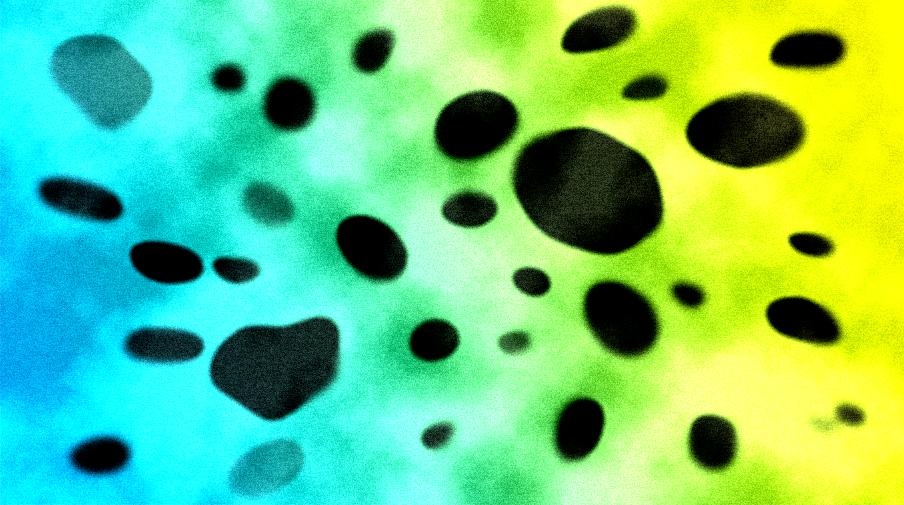 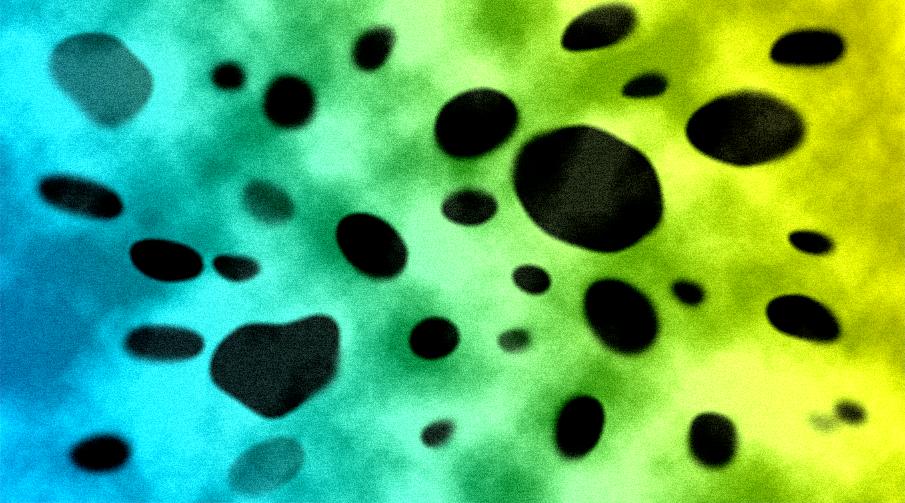 Further, you can use Levels or Curves or Selective Color or Hue Saturation layers for more tweaks. 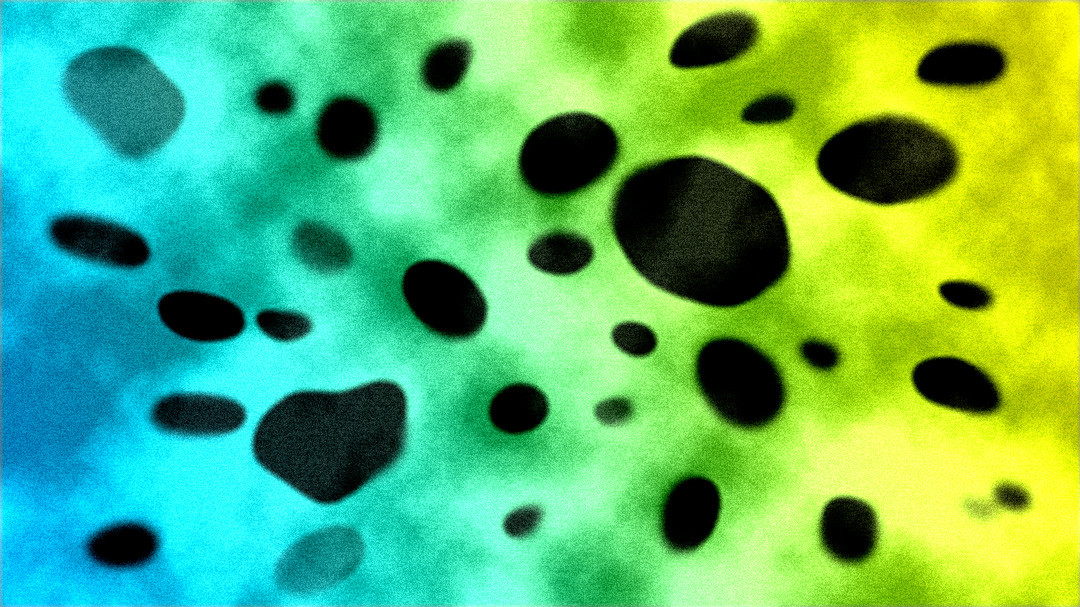 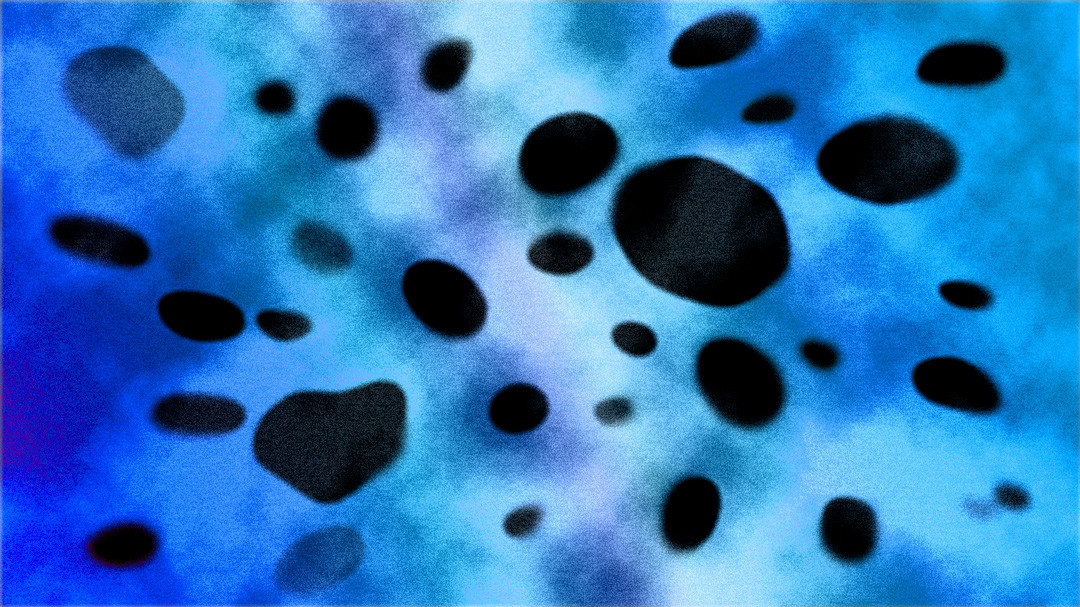 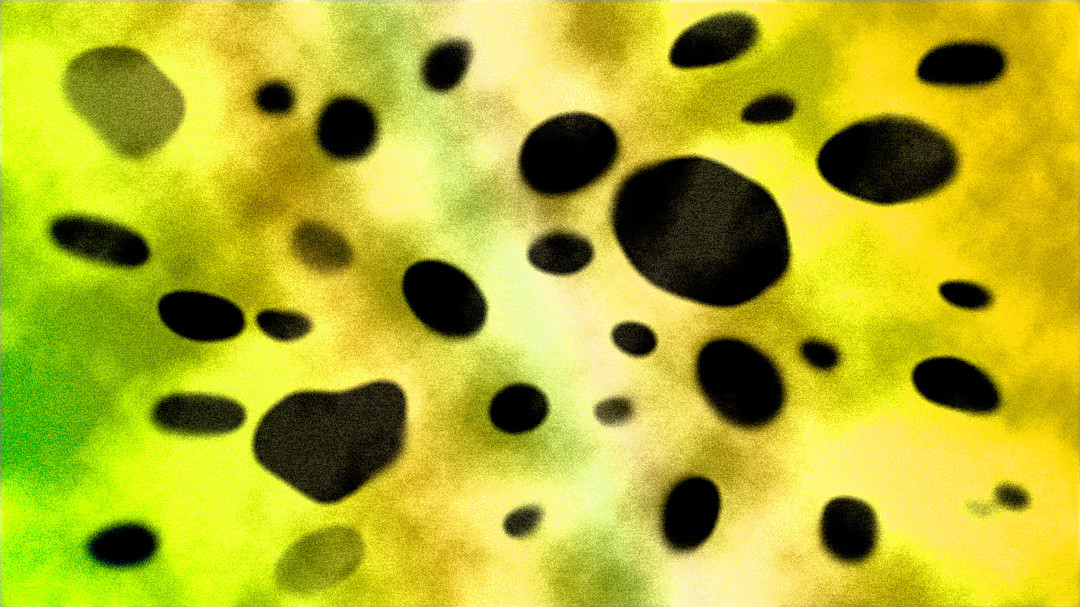 This should give you a basic idea how you can achieve effects like this. Different Blend Modes, Noise, Gradients, Colors, Opacities, Symbol Shape, Symbol Sizer etc. will give you different kinds of results. And you actually don't need to follow exact same steps. 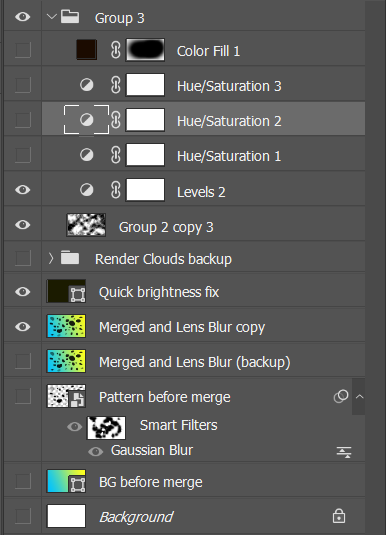 As @Wolff points out, the images that you posted were derived from photographs of poison-dart frogs. What wasn't mentioned is that the kind of pattern that one can see on poison-dart frogs, zebras, conch-shells, and other biological specimens are usually modeled mathematically as reaction-diffusion processes.

Fortunately, you don't need to understand the details of reaction diffusion equations to produce great Photoshop mimicry of the process. There are several web-based tutorials and YouTube pages to guide you. Just search on Google, as I did, for reaction diffusion Photoshop.

Not the answer you're looking for? Browse other questions tagged adobe-illustrator adobe-photoshop print-design photoshop-effects patterns or ask your own question.