I'm trying to make both this text and the image look like it was actually drawn into the 'paper' by hand. Or at least as close to possible. What kind of techniques can I use in Photoshop to do this? 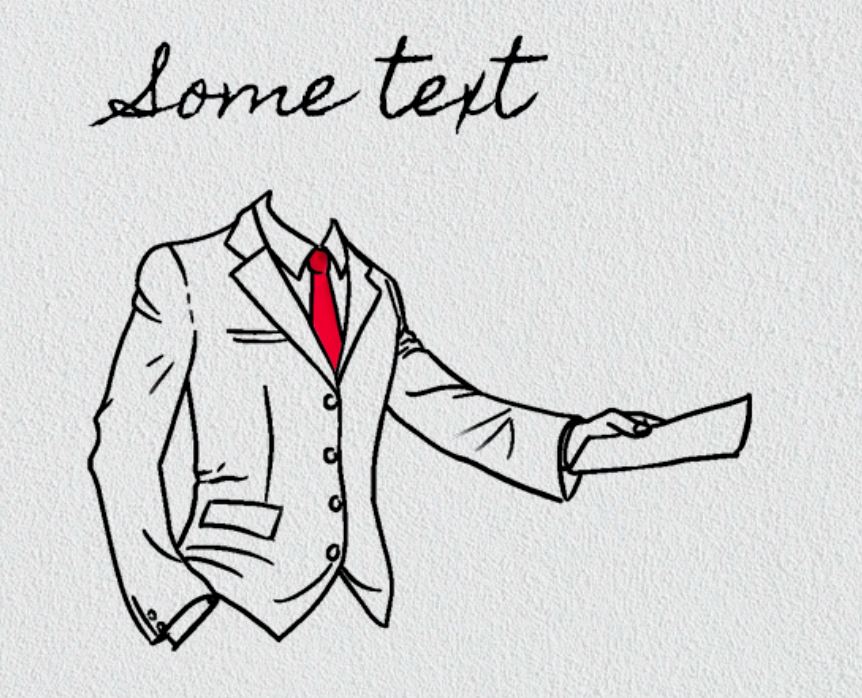 Your paper texture is coarse like a concrete surface. The lines cannot be perfect when drawn on it, they must also be as crunchy. One way is to add a distortion filter. It can be displacement map which uses the paper texture to displace. Or as well the Ocean Ripple filter with small amplitude. It's applied to your attached image: 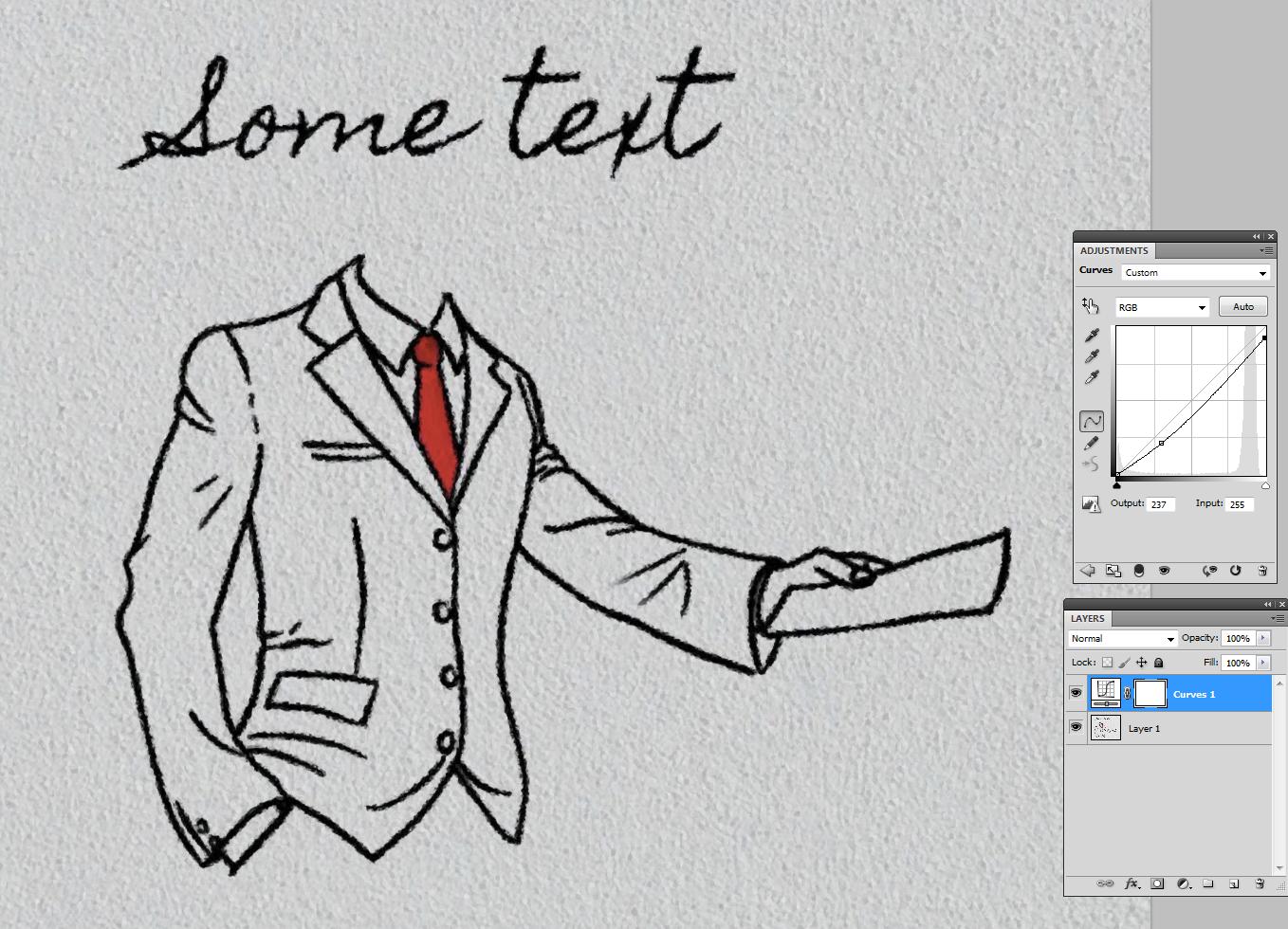 Unfortunately it affects also to the paper texture. The adjustment layer is used to make the paper crunchiness a little less offensive.

You should have at least double pixel resolution to make it look sharp and you maybe should use some realistic paper texture if the concrete is not just the right one. Higher resolution is needed even to make finer texture grains possible.

Here's another version which has less crunchy (=not embossed) surface. The lines are distorted with ocean ripple. A different kind of paper cliche is inserted to take into the account "it must be like ink on a paper". 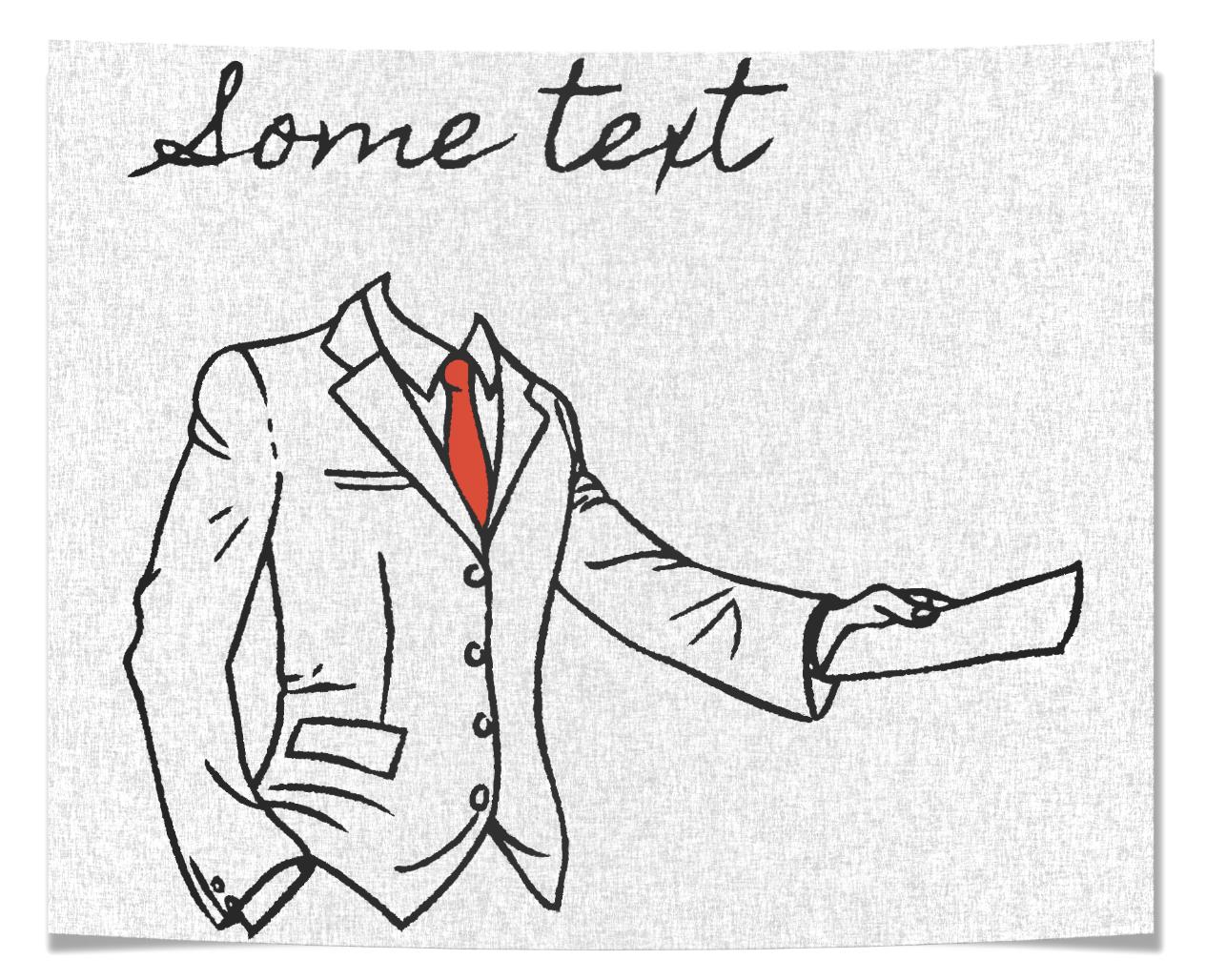 I worked with doubled pixel dimensions when compared to your attached image to make finer texture possible.

To make it substantially better one should have your line drawing as vector strokes (=paths), not as strokeless areas which are filled with black and red. Then it would be possible to apply realistic brushes to the curves. There's no practical way to find the strokes automatically (no matter, how many us wants and has wanted it).

To get it right it should be redrawn. That's not a problem worth mentioning if one has sharp traditional drawing skills. In that case one could make a real drawing on paper, wait until the ink has dried, scan it and that's that.

Tracing the image as strokes (=a poor substitute of proper drawing) and applying an artistic vector brush to the strokes really creates weight variations. Unfortunately the text was scrambled unreadable. It should be rewritten by hand lettering. In the next image the concrete paper is quite the same as yours, but the drawing is traced and the lines are Illustrator's artistic brush strokes.

The result is pasted to Photoshop. The Photoshop image where the Illustrator image was pasted to was about 1550 px high to make possible fine enough concrete texture.

The concrete embossing effect is inserted AFTER pasting the image to a grey background, so it affects also the lines and creates a little crunchiness to them. 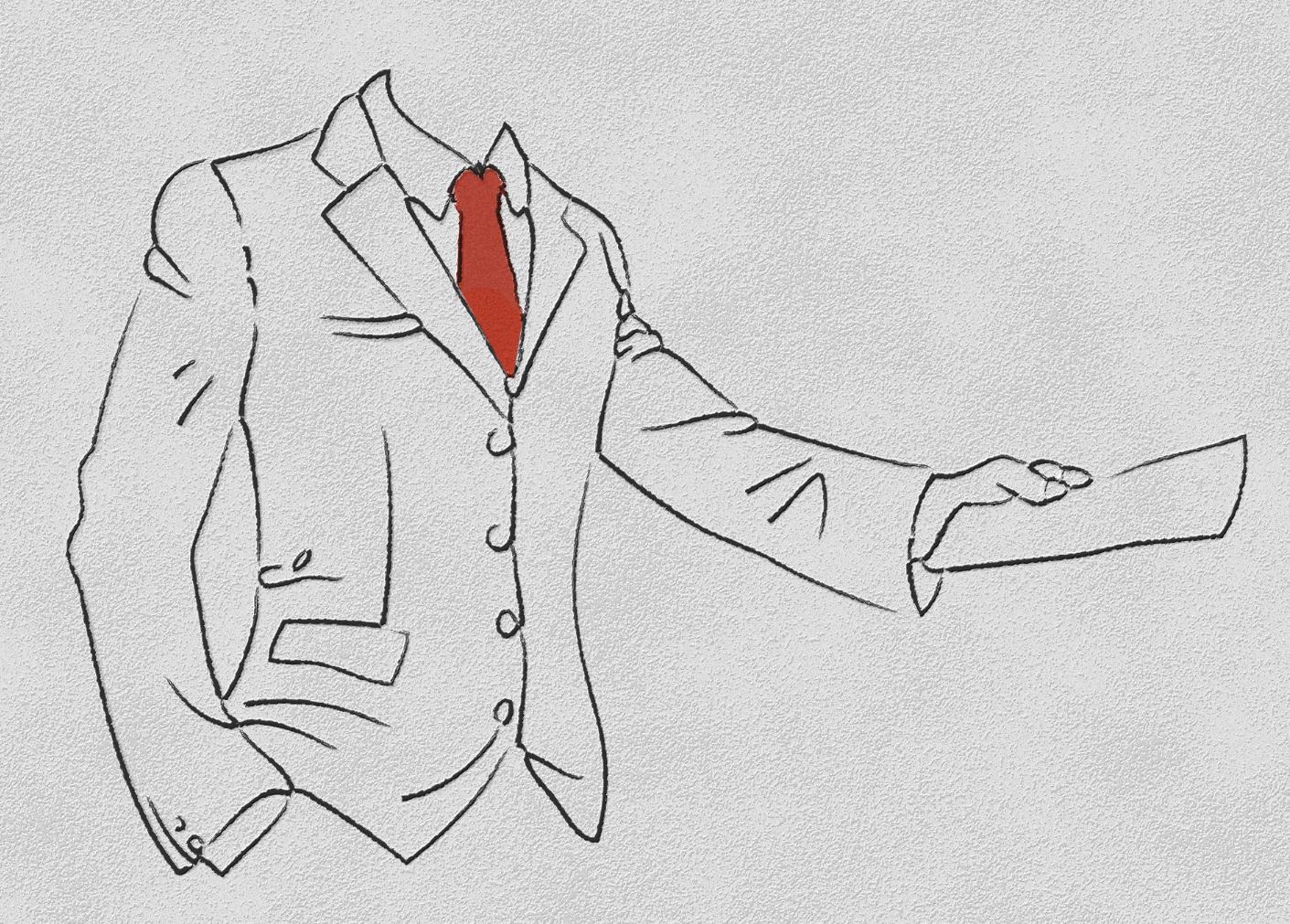 ADD1: The question leaves possible that you already have it as vector. Photoshop's paths can be saved to be opened in Illustrator. No tracing is needed, only apply a good artistic brush to the strokes. You may need to split or reverse paths and combine them, too to get good stroke directions and starting points.

ADD2: The questioner left in a comment a link to file which he said to be the original vector. The link gave A screen resolution bitmap image, not a vector. Fortunately it at least was a PNG, not a junky JPG full of compression noise: 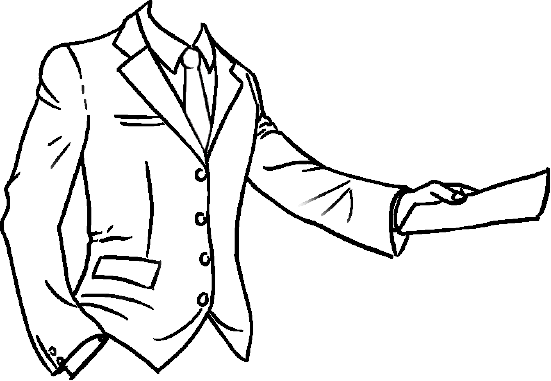 You may wonder where's the red? I selected it in Photoshop and pressed DEL.

As already said, if a vector image is not available and one wants to work with computers instead of pen and paper, the best option is to redraw the image in Illustrator or Inkscape. A drawing this simple is replicated in 20 minutes with the pen or pencil drawing tools, if one keeps the PNG as a locked reference. We call it manual tracing. Of course, it's a hefty task for a beginner who must also learn to know the program. If one had a modern pressure sensitive drawing tablet + good drawing skills, he could be even faster and get proper artistic brush strokes in the fly.

Just for curiosity I tried to trace this to vector automatically in illustator and Inkscape.I tested how those programs found the strokes. Inkscape's Trace Bitmap was used in Centerline mode. It gave this (after changing a narrow stroke): 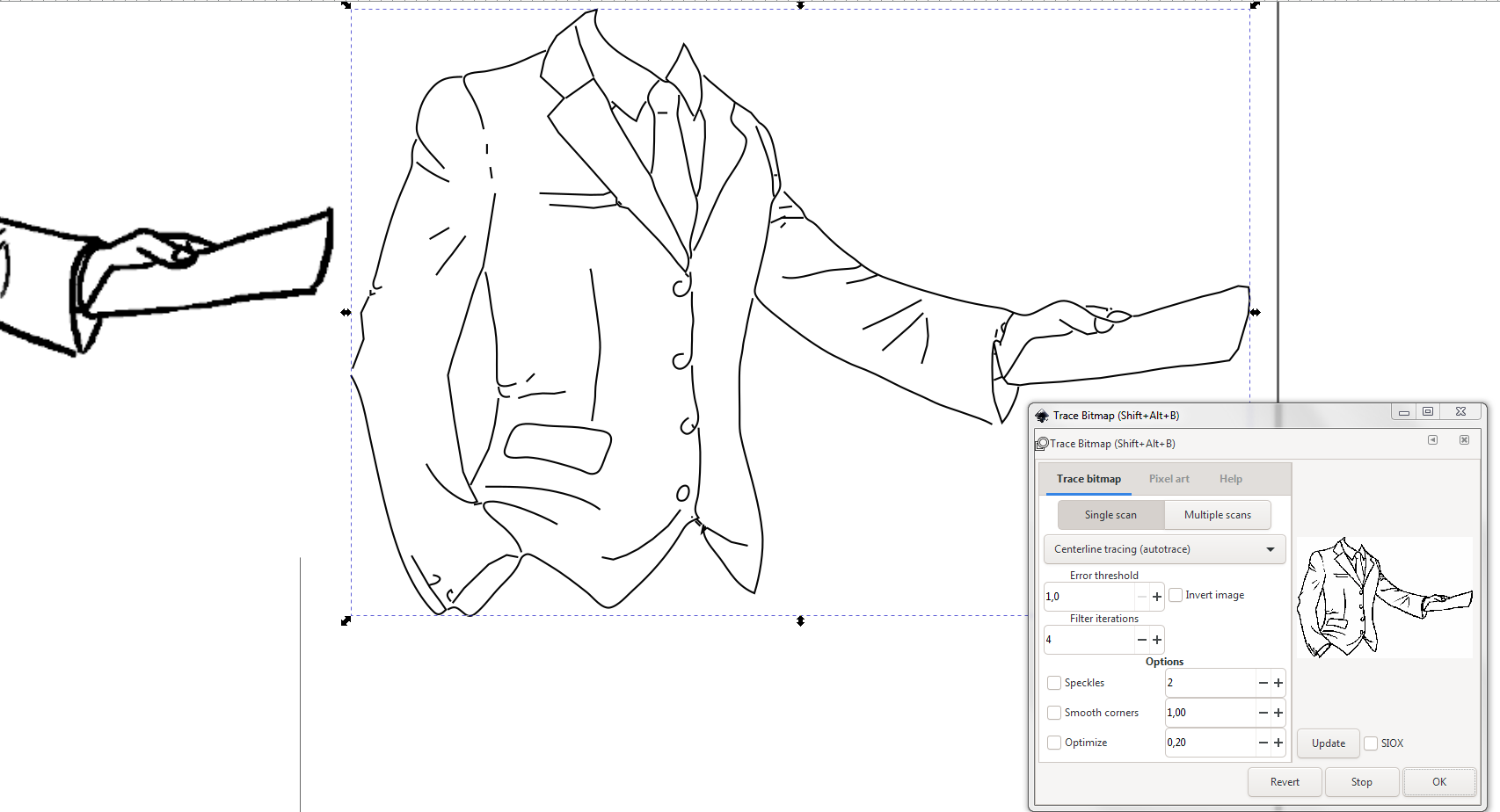 It's not perfect. At crossings and in dense areas Inkscape generates unacceptable knots which must be redrawn or edited with the node tool. A high zoom detail of it: 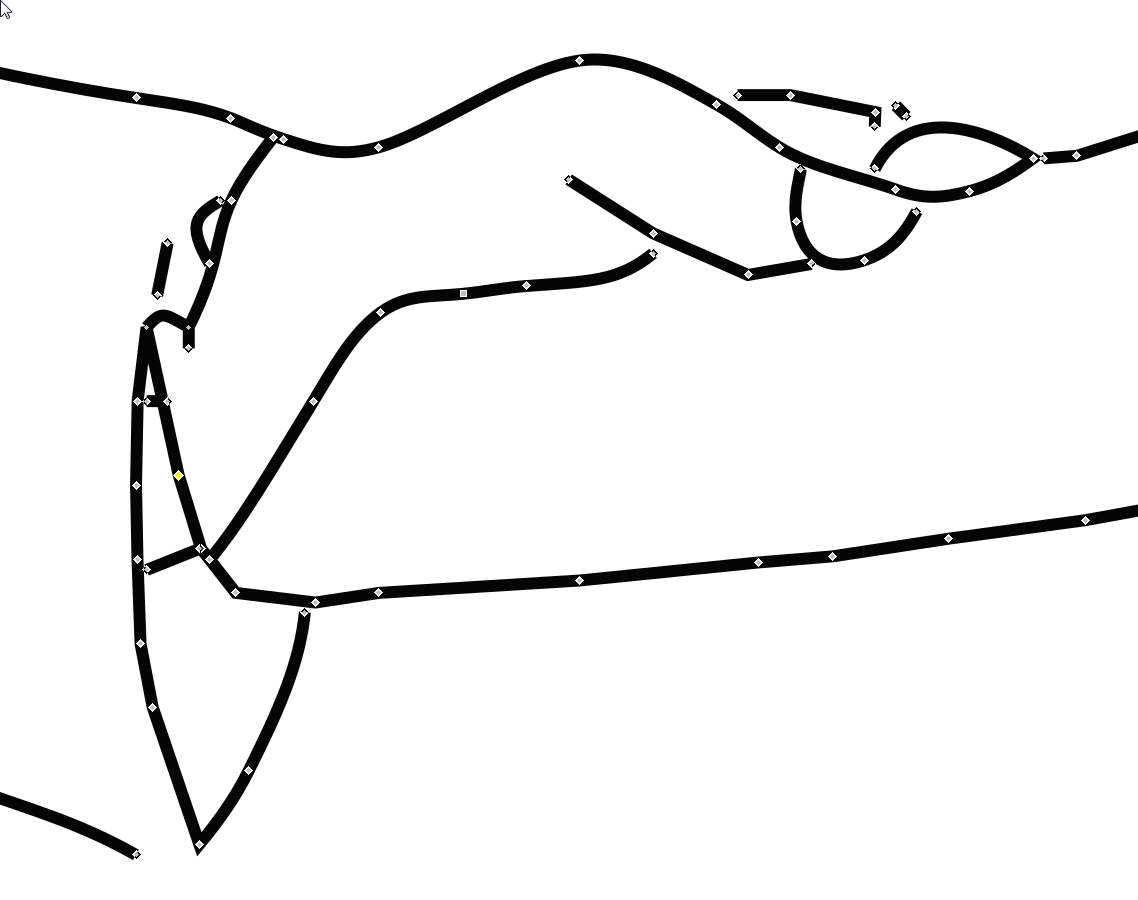 Fixing several jumbles like this is not easier than redrawing. Here a few strokes are drawn over the PNG with the Bezier curve tool (=Pen) in Inkscape, which is very flexible for jobs like this:

Illustrator's tracing has more to adjust. The stroke only tracing can be set for zero error tolerance. The result undeniably is on the original image lines when it's watched without zoomin in. Here's the PNG in the left and the tracing result in the right: 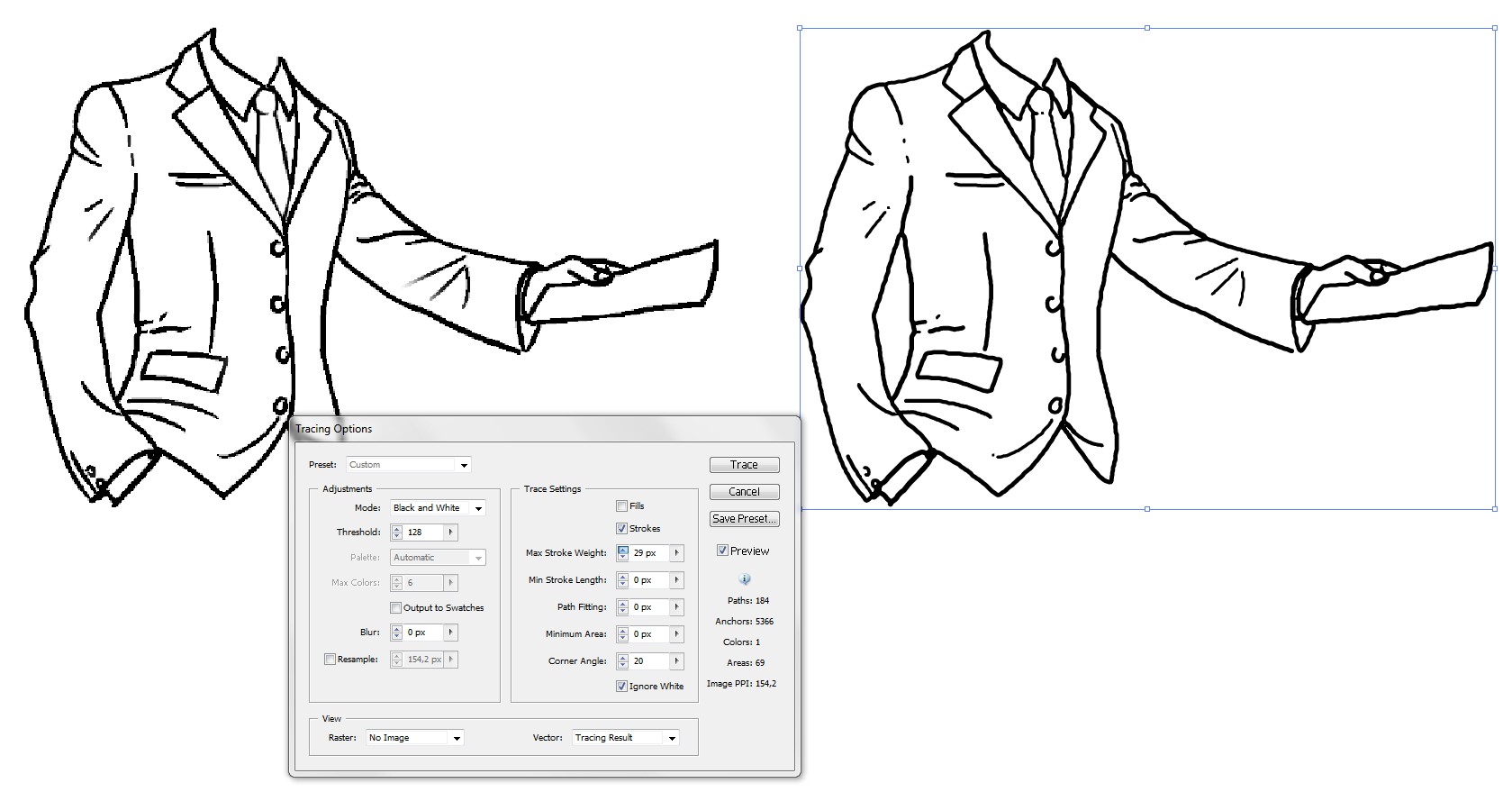 But the paths are splintered to small pieces and they are full of zigzag. One can easily see a tendency towards perpendicular crossings: 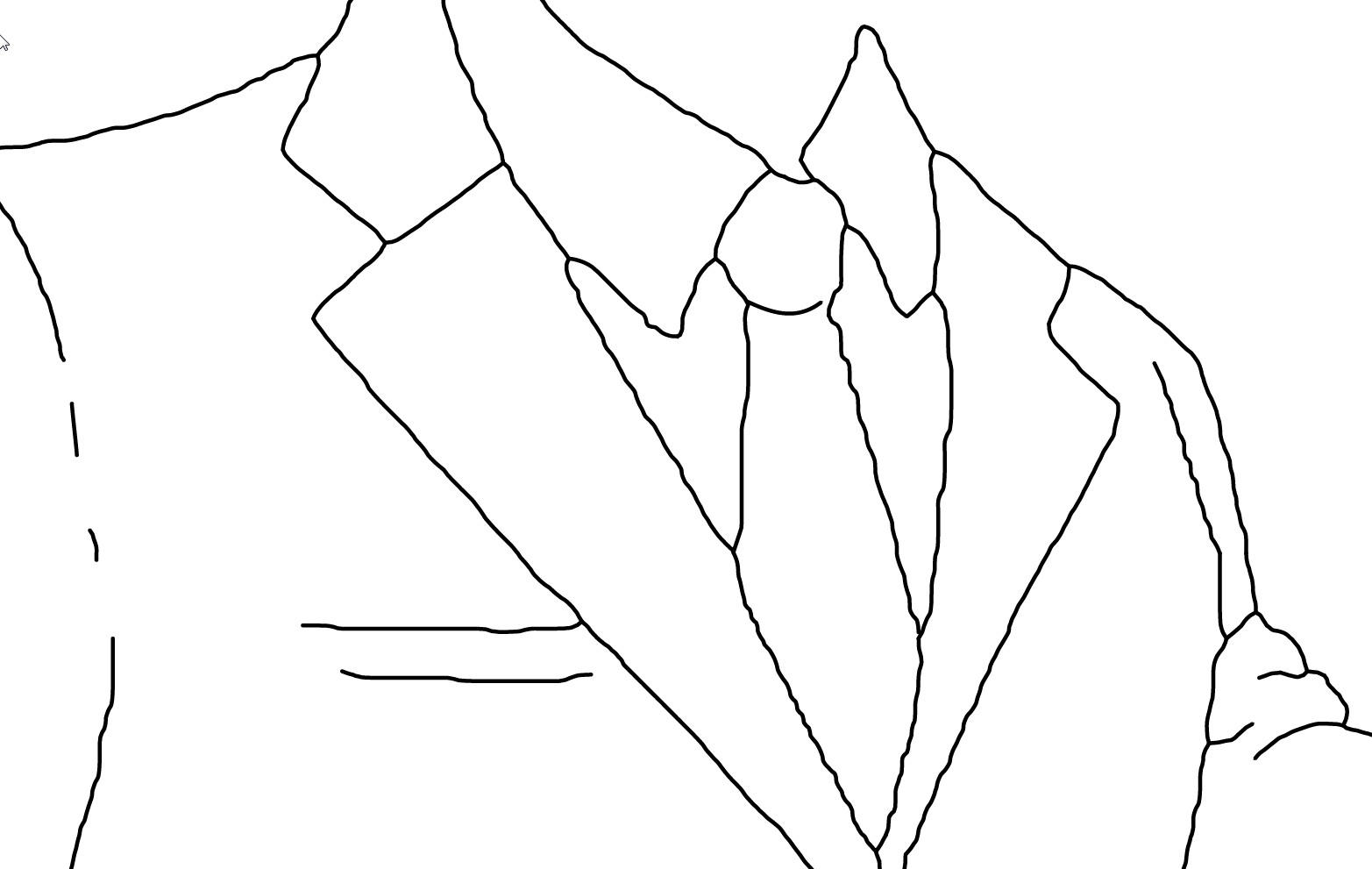 Nothing is selected, so one cannot see in that image how many pieces every curve actually has. Fortunately After expanding and ungrouping the tracing result one can easily select pieces which seem to belong to the same longer curve and join them by typing Ctrl+J.

The zigzags get reduced with Object > Path > Simplify. You can see that the number of path nodes (=anchors) is reduced more than 90%without radical path placement errors:

There's still bad small details here and there. They need editing. If one has enough patiency with the path editing tools he finally gets something like this: 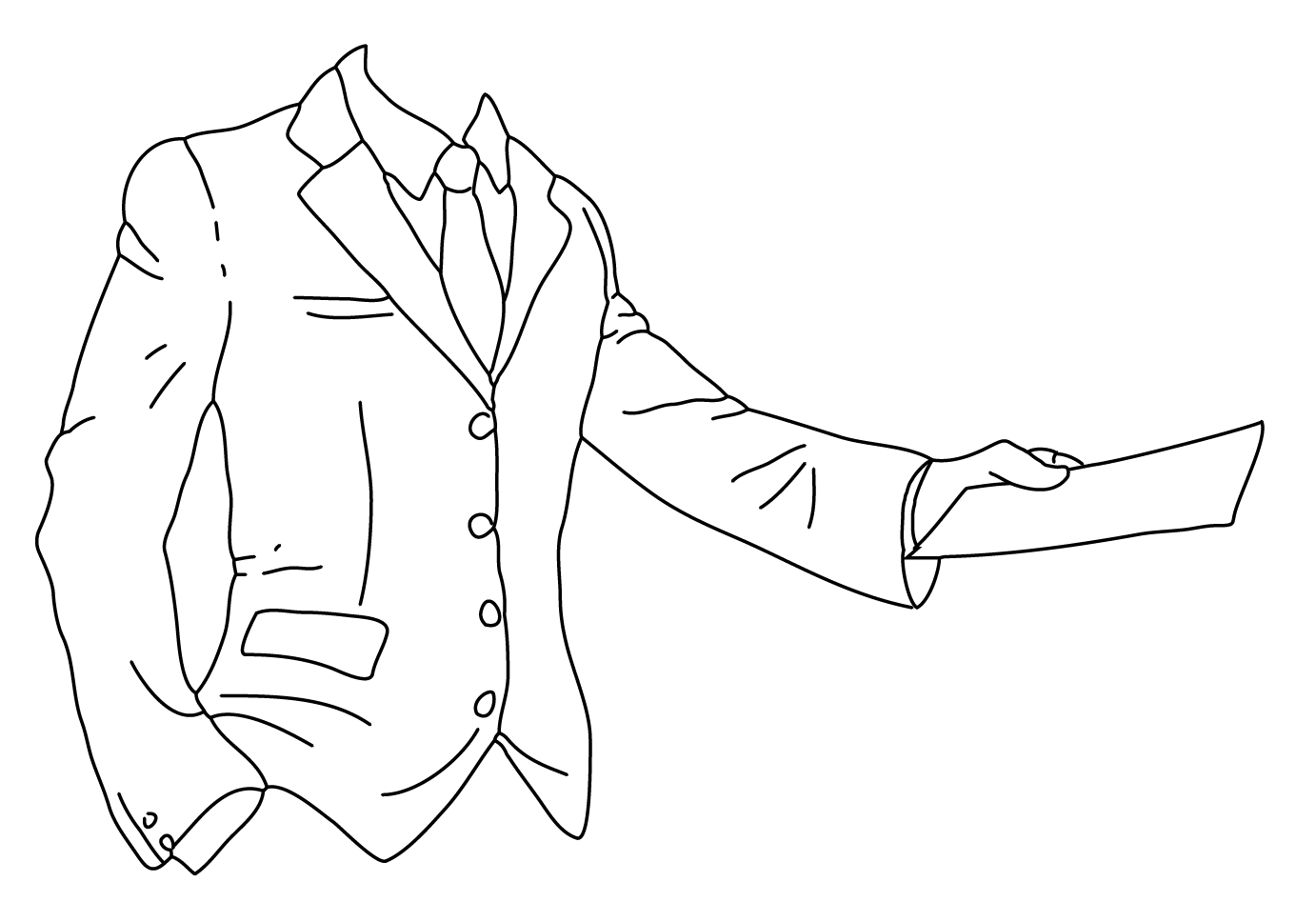 To get it into this shape by editing is easier in Illustrator due the more accurate stroke-only tracing, but it still needs so much work that one should consider redrawing. The drawn version would have one superior advantage: The image would be divided to separate paths in a natural way without breaks and corners in obscure places.

The questioner wanted tapered lines like they were in my ultra coarse first tracing attempt (=version 3 from the beginning). Unfortunately I trashed it, but here's created a tapered Art Brush which is applied to the lines: 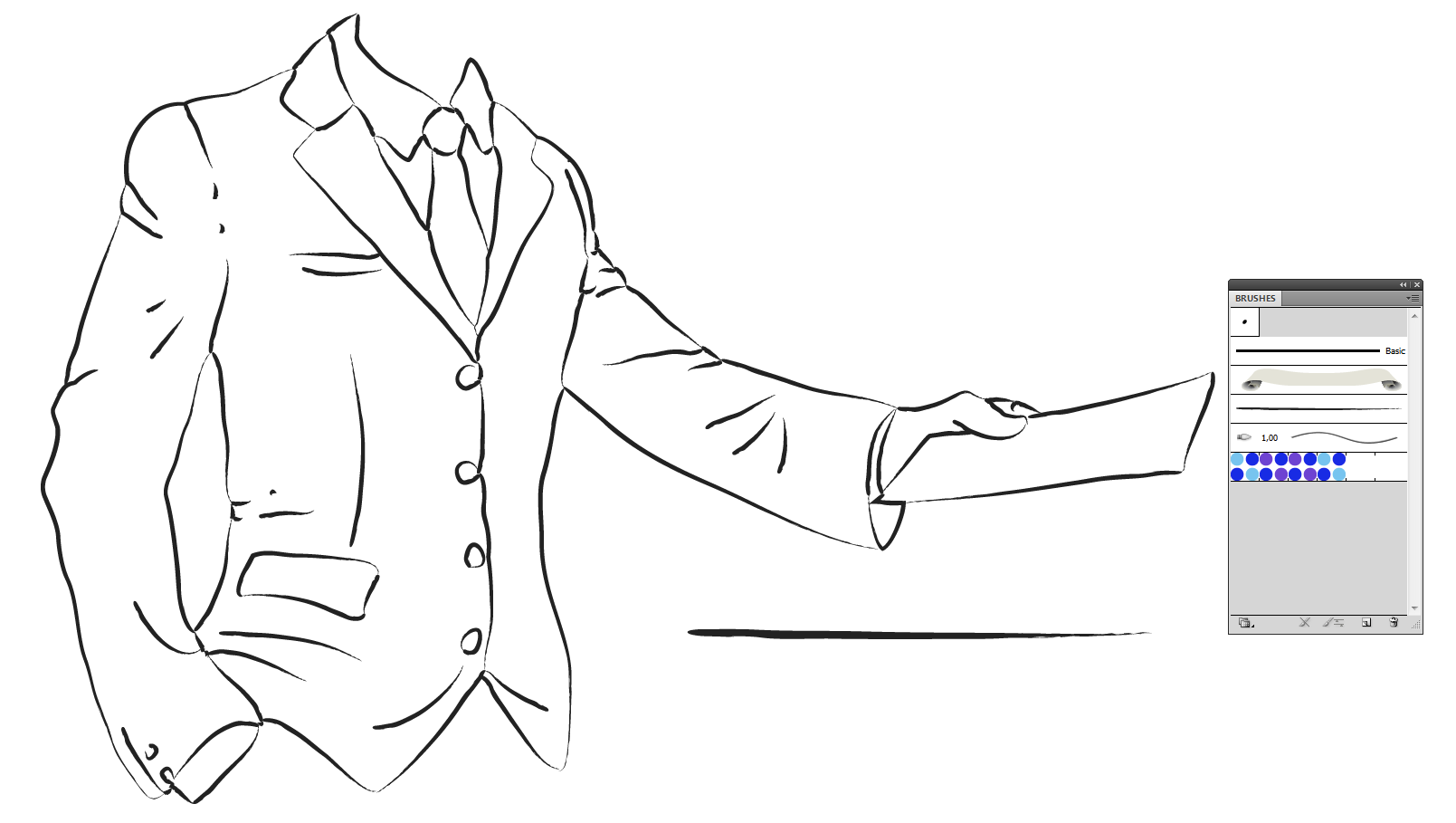 The Ai file is here for more close inspection: https://www.dropbox.com/s/ndz12nuziqx2ddr/Handout0.ai?dl=0

The black brush shape is edited from Illustrator's preset brush to get a less brittle tail. One can draw what shape he wants and drag it into the brushes collection. I drew a line with a preset brush, expanded it, edited the tail and dragged the result to the brushes.

The same brush is applied to the whole drawing. It's surely not optimal. At least 2 opposite version and a direction-neutral version would be useful because the path directions in the drawing are random.

A proof: See how much it changes when the brush direction is reversed in the brushes collection. Many lines look now better, some others became worse. 2 opposite versions to select from would be better. 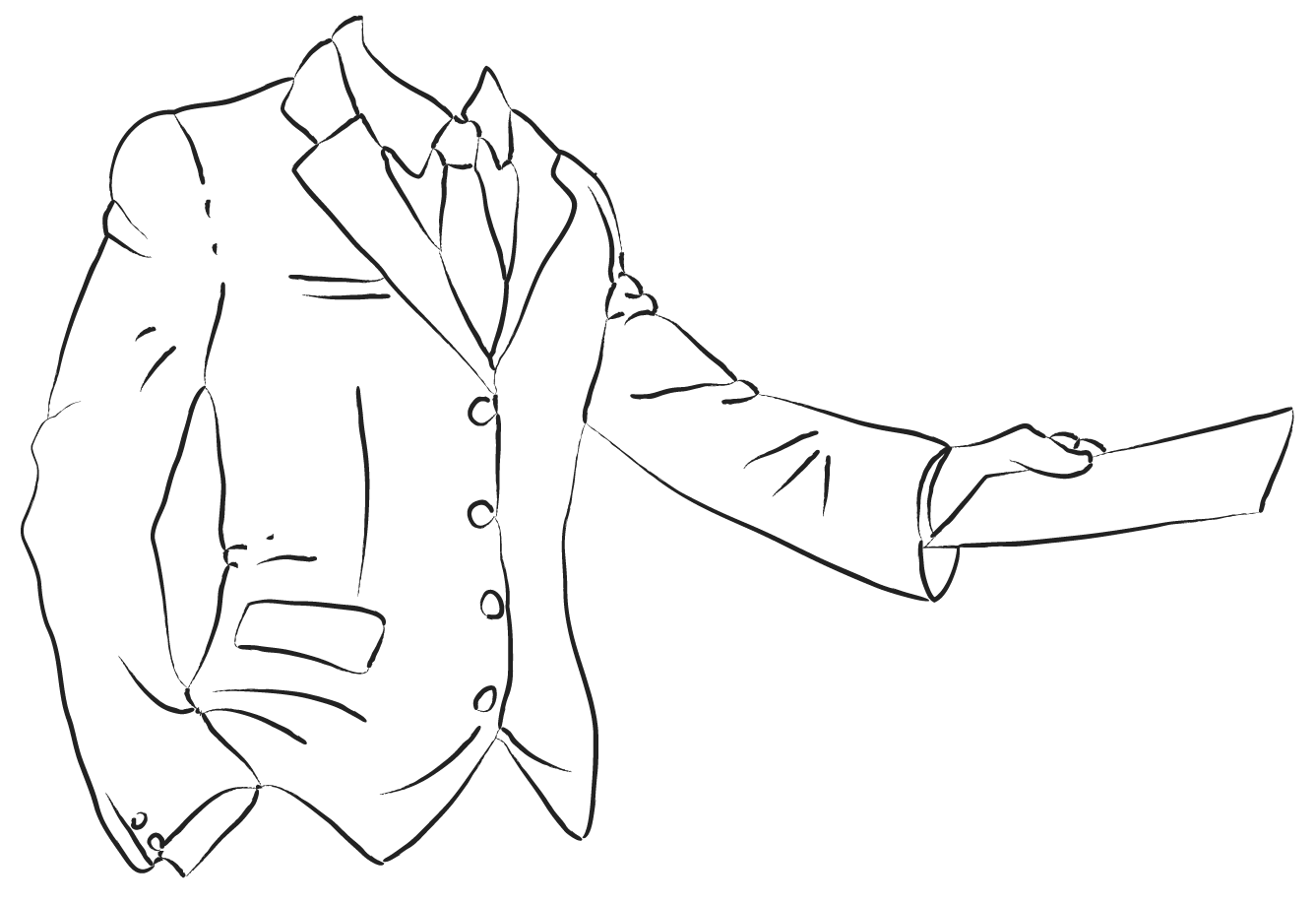 In Inkscape one can apply Path effect Pattern along Path for the same purpose. Only remember to combine all curves to one with Path > Combine before applying Pattern Along Path -effect.

I guess you have already decided how to imprint the image to your favourite texture, so I skip most of it. I copied and pasted the Illustrator drawing as pixels to a 1500 px wide which had the grey texture layer + an adjustment layer to control its contrast.

The Drawing got Layer style Bevel&Emboss (=outer bevel to save the thin lines) to create an illusion of being debossed into the paper. The curves are not made crunchy because the ink is in a groove, not on the concrete like surface.

On the top there's the red color: 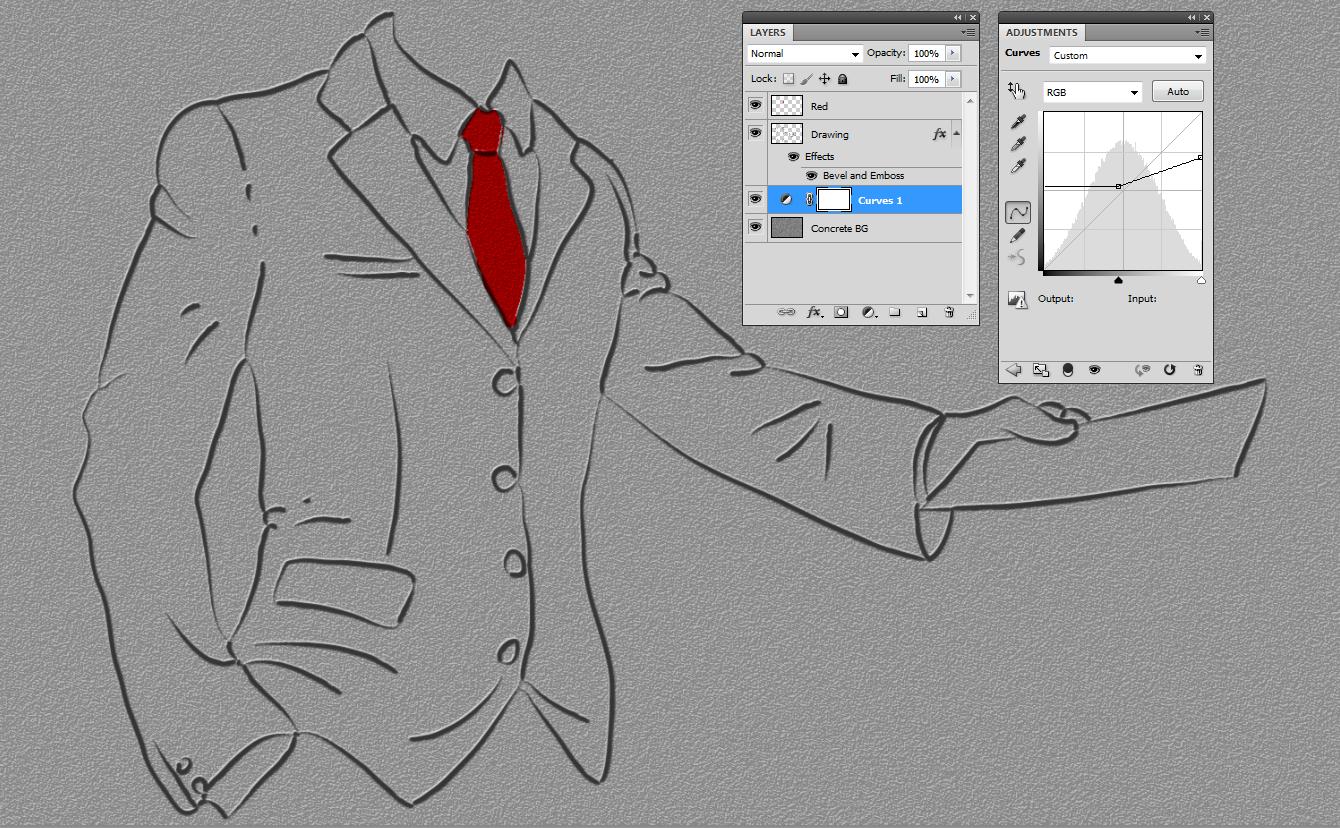 Check it here for details: https://www.dropbox.com/s/jhe6mi0kvh6bj8k/Handout1.psd?dl=0

I think probably the best and easiest way to replicate a print on paper or other materials is through the "underlaying layer blending" in the "Layer styles". You can get this dialog by double-click on the layer or group with the art. The drag & drop the white dot a bit to the left. Hold alt to separate the dot to make the transition smoother.

This makes two things: it lowers the contrast (as a picture of a print is never fully black) and also it adds some texture that is really close to the what you get when printing/drawing on a textured paper. 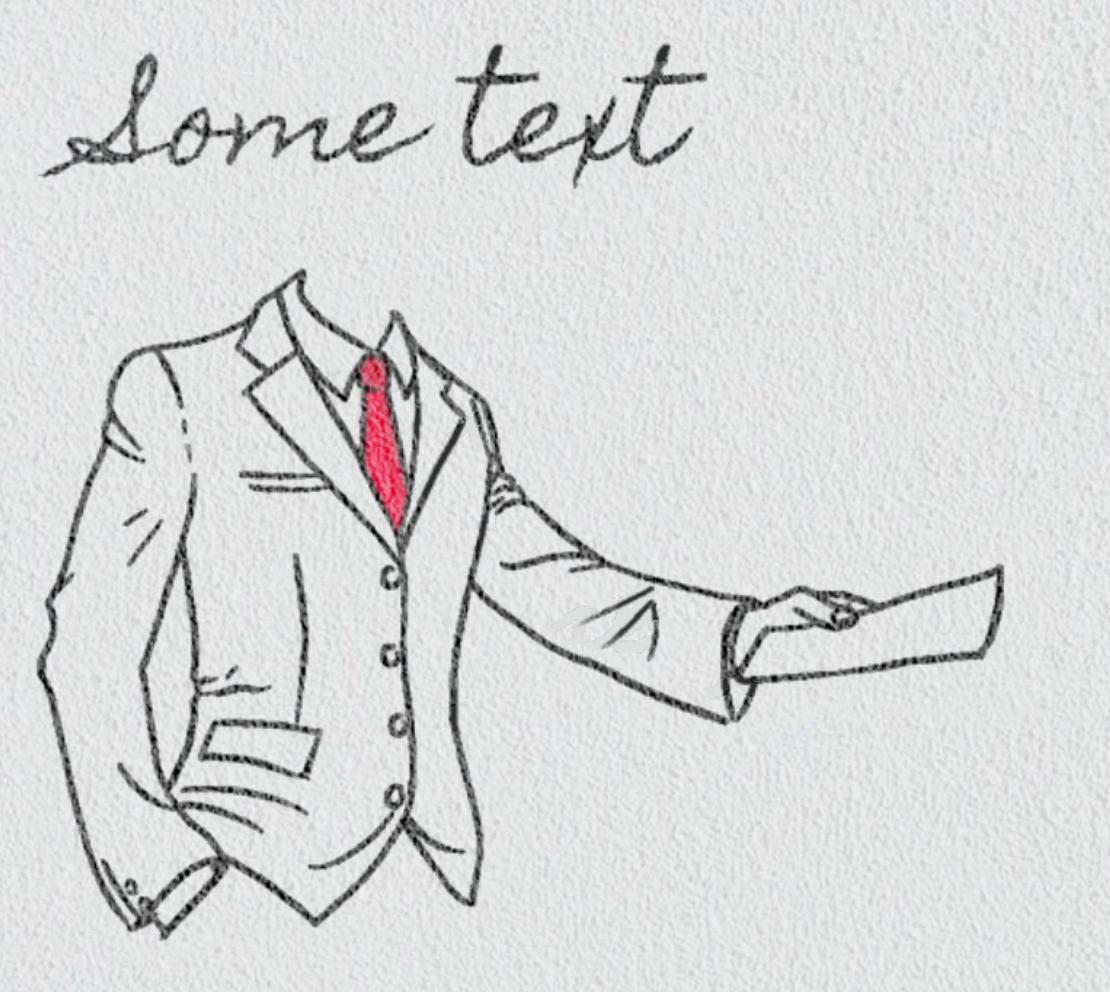 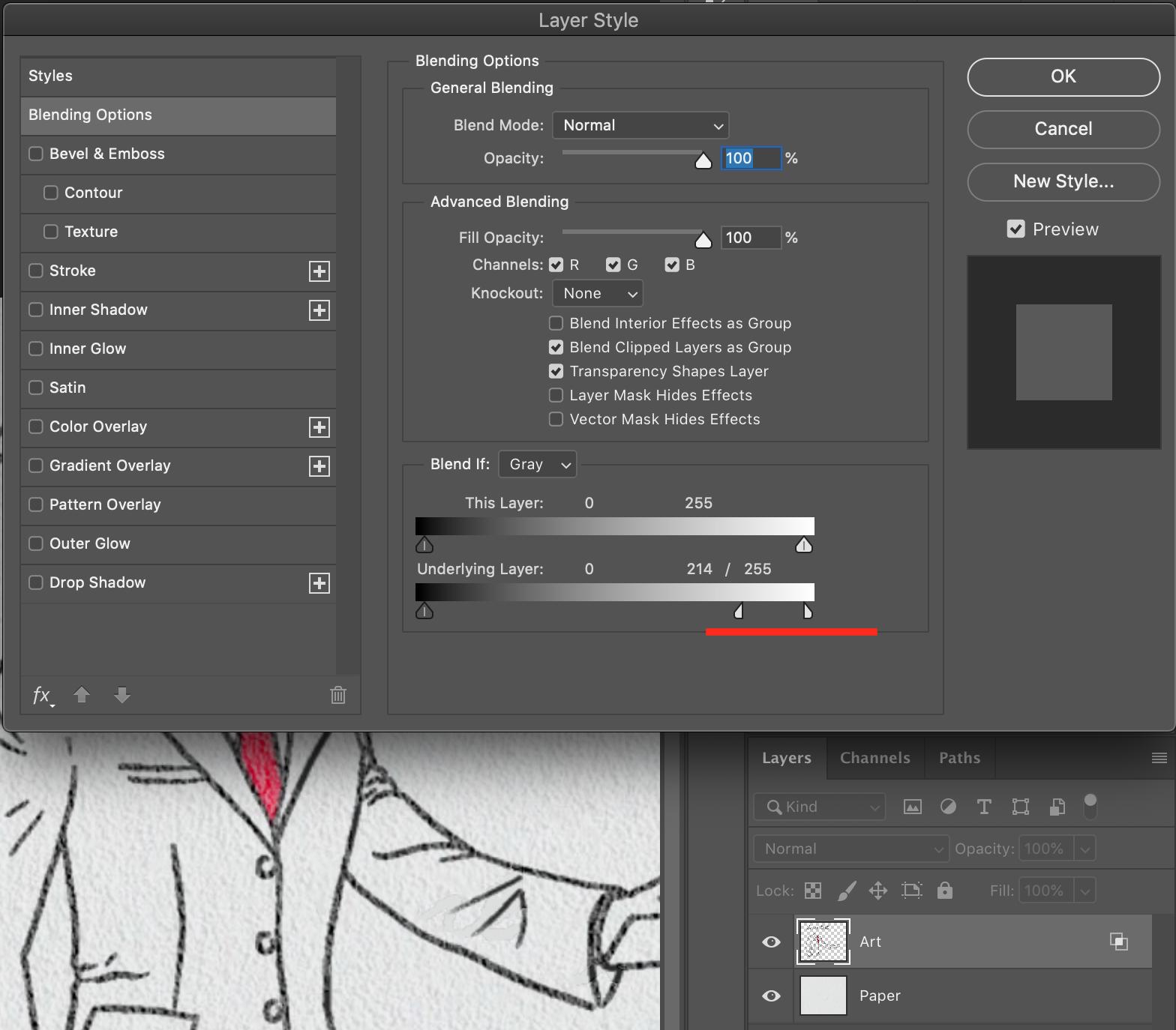 0
Perfectly symmetrical curved line / edge
0
Rastering Vector Art: Photoshop vs Illustrator?
3
How to make an image look like an all-white sculpture in Photoshop?
4
How do I simulate in Photoshop what a piece will look like when printed on non-white paper?
5
Make text look like it's part of icon
0
Pen on graph paper effect
1
How to achieve vector look on flowers from a photo?