I have created an image and added some effects to it but now when I try to save it as PNG there's a white frame addon to it. I've tested a few things and realised that this behavior happens when I convert the image to a smart object. How can I save the image as PNG and keep the image "as is" without the extra white frame?

Update: I've added a side by side picture. Left side is the psd, right side is the same PSD that was saved as PNG and imported back to the picture.

I think the reason this is a mystery to you is you've not really grasped what Blend Modes are in general, and Overlay in particular.

The problem, and the thing that's confusing you, is that your Drop Shadow only goes into Overlay mode when you turn on the layer below. When that layer is off, it's not in Overlay mode, it's in Normal mode.

Blend modes are blend modes. A "blend," by definition, requires at least two ingredients. In Photoshop, a layer or an effect blends with something below it. There must be at least one non-empty layer to blend with, otherwise the layer or effect displays in Normal mode. That's why you can't assign a blend mode to a background layer: with nothing below it, it can't ever blend.

Set any Photoshop layer to Overlay (or any blend mode). If you have no layers or only empty layers below it, you will not see any change; the layer has nothing to blend with. Add a layer below and fill with a color. Now you will see a change, because Photoshop now has a second layer to use in the blend calculation.

Your PSD clock has a white drop shadow. You should now have realized that it is a white drop shadow in Normal mode, regardless of what blend mode you assign to it, until you turn on the non-transparent layer below it. Because you're using a black layer, the Overlay mode white simply disappears in the blend.

PNG is a web format. It contains transparency, but browsers, HTML and CSS don't understand blend modes so there is no reason for a png to contain that information. When Photoshop exports your clock-with-transparent-background to png, it exports the white "shadow" in Normal mode because it is in Normal mode, and because any blend mode information is meaningless to png.

The "white frame" you are seeing is the Drop Shadow effect you have applied to the layer: 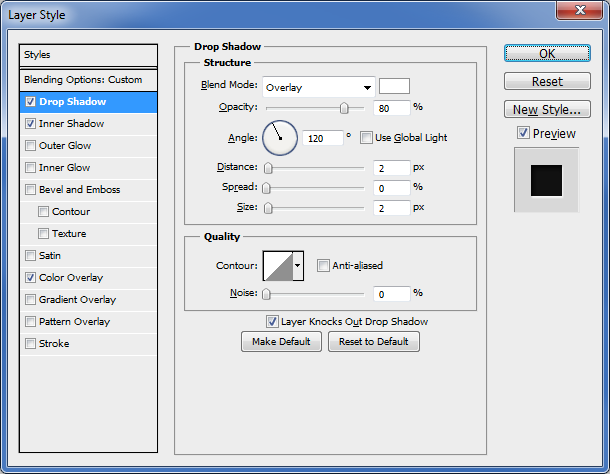 Remove that effect and you will not see it when you export to PNG.

1
Create an "pressed in" look