We're about to publish a free, open source plugin that translates the WordPress admin UI into the users language. This plugin will be freely available in the official wp.org plugin repository. Now we need a header (actually two: one for retina capable devices and one for normal displays) - in the size of 1544x500px/772x250px - that explains what the plugin does.

I agree that my first 10-minute draft is a bit racist (by accident). Actually 110% of all people told me that it's funny, but racist. So we have agreed that two things are no good idea:

This was my first draft (will not be taken).

This a screenshot from the plugin in action. 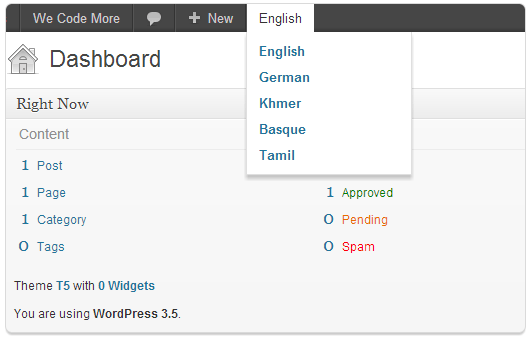 Note: The label is named WeCodeMore and has a Google Plus Account and a GitHub account where we post our updates to followers (in case you want to see the details).

As I've read in the comments, the question seems to not be completely clear. I'm aware of the fact that this question is half design, half user experience.

The above question can be extended with: "No user should have his first bad experience when looking at the banner".

I understand that some people suggest flags or alphabets. Currently we went with alphabet, but the question is still open.

Short explanation: "Flags" represent countries, which languages don't do. The same goes for "Alphabets" (or character sets). I, for example, am an Austrian citizen. My mother tongue is "German", but a variation of it (like "Letzeburgisch" in Luxembourg or "Swiss German" in Switzerland). If someone would tell me that a German flag represents my language, I'd be alienated, as Germany is not my country. Then there're minorities in every country, like Burgenland-Croatian, Romani, Hungarian, etc. And with character sets it's the same. Nearly every western language shares the same set.

I'd recommend using both a world map or globe and possibly a few fragments of different languages, a bit like wikipedia.

This is something I used for a (defunct) project, feel free to steel the concept.

So your question is essentially "help me brainstorm visual representations of the idea of lots of languages, in a way that is non-offensive and can be used in a banner image"?

If so the only possible "right" answer will be about how to go about getting ideas.

So first, how do you do background research on what already exists solving similar problems?

You stop thinking about apps and github and banners and anything other than, who would need to represent "languages"in the abstract? This might lead you to educational institutions with a focus on international linguistics. That might lead you to the wall carvings of the Bibliotheca Alexandria in Egypt: 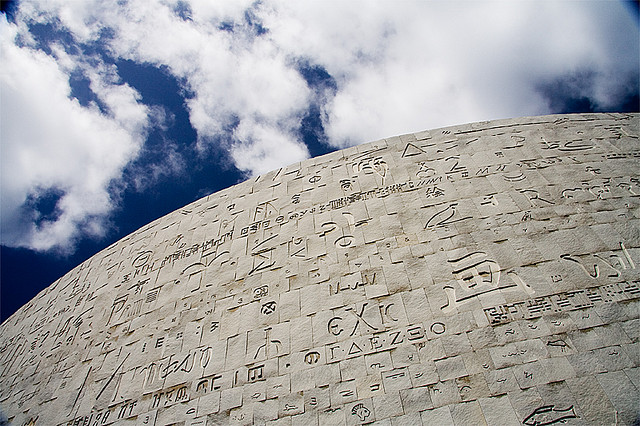 ...which might give you ideas on how lots of languages and scripts can be used to create an interesting background image.

You might then think about the field of linguistics, which is entirely about languages without narrowing itself to specific languages. How do linguistics books, event posters, etc illustrate this idea?

This kind of research might then refine your idea of how your app is different to other products to do with languages. You might realise there is an important aspect of what your product does with languages that should be emphasised. So you do the process again. Who else, in any context, has needed for any reason to emphasise that aspect of language, language use, communication, understanding, translation, or whatever it is? Then you do research which might give you an even clearer idea of the exact niche you want to bag and the exact idea you want to get across.

All the way, keep anything that feels in any way appropriate, and build up a "mood board" of snippets, clippings etc that for any reason feel like they get across any aspect of the right idea. You'll eventually end up with lots of ideas, lots of examples for inspiration, and a much clearer idea of what exactly your end result must do.

A lot of people are tempted to skip this sort of process and just dive in with whatever their first idea or two is. But, as it sounds like you've discovered, that almost always ends up taking much, much longer in the long run as you discover late into the work that your first idea wasn't actually nearly as suitable as you first thought.

I think that after doing a proper process of iterative brainstorming and research, you'll find that the best idea isn't actually a very literal representation of languages in the abstract. It might be something that evokes the idea of a diverse team each doing their own thing their way. Or you might realise you're getting too abstract and really, you just need to emphasise "this is WordPress but in your language", and you might end up with something like, the WordPress logo, split between many screens, each one showing one letter, each one implying a different language with scripts (e.g. Korean, Thai, Hebrew...), diacritics (e.g. accented letters) and language-associated typefaces (e.g. blackletter).

But we'd be doing you a disservice by just giving you suggestions. This sort of process doesn't need to take long (an hour is sometimes enough) and it's not just the actual ideas that make it valuable - the evolution in the understanding of what you are trying to achieve with the design is just as valuable.

I would suggest to have a drop-down saying Available translation/language, then you can list as many as language you want.

if you have images/flags in-case they increase they will look odd.

you can list as qtranslate(plugin) does (an awesome plugin.) 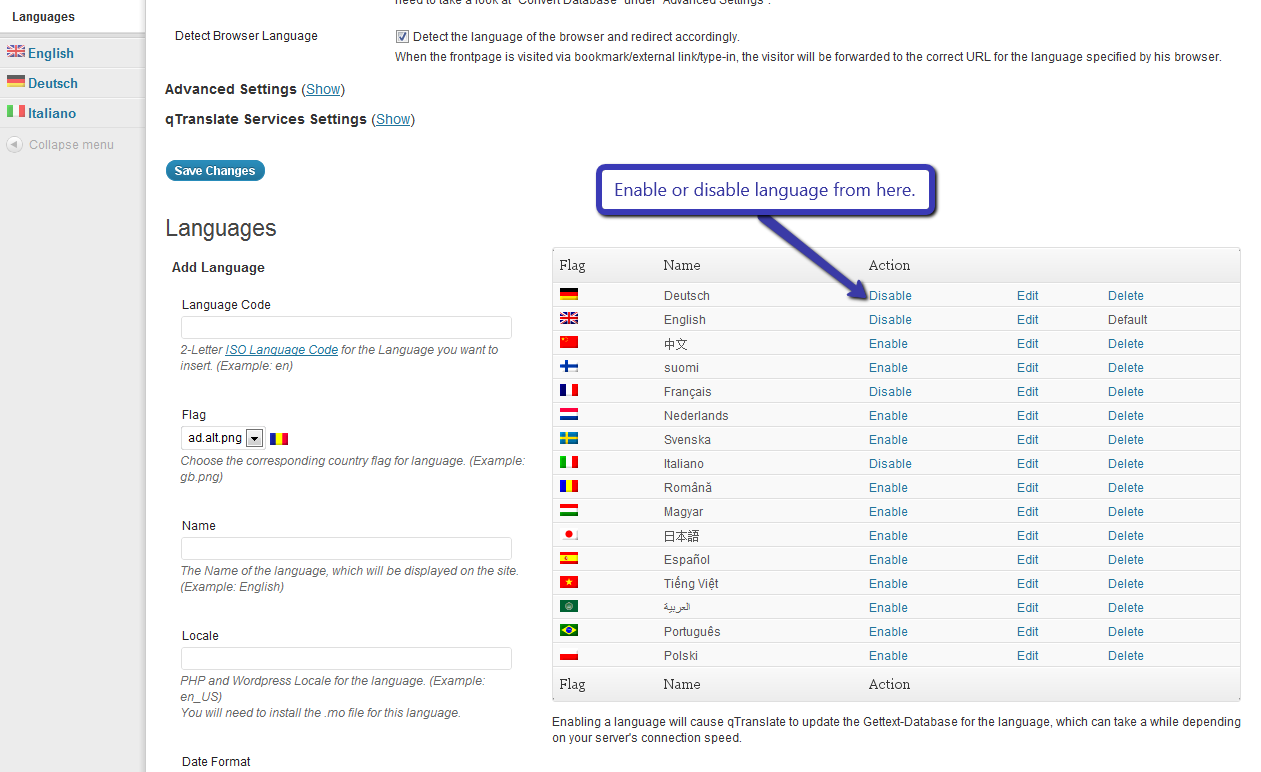 Not the answer you're looking for? Browse other questions tagged icon visualization or ask your own question.