I have created a Photoshop action which:

This is working but I would like to automatically duplicate the layer group back to the original image without having to select it from a drop-down box.

Is there a way to do this? perhaps by adding a script or something?

Your problem may require scripting. The name of the original image is included in the recorded action so it only works for that particular image or at least one with the same file name.

A workaround that might be acceptable (though I admit hardly ideal) is to first duplicate your original image to rename it something generic, then run the action on that. For example, this duplicates a starting image as TEST then duplicates that, selects all layers and groups them, then copies that layer group back to TEST: 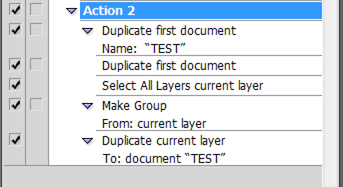 Not the answer you're looking for? Browse other questions tagged adobe-photoshop photoshop-scripting actions or ask your own question.

5
How do you create custom scripts for automation in Photoshop?

5
How do you create a new document from a layer group that's also the size of the group?
3
Options for default layer visibility in Photoshop
3
How to duplicate adjustment layers from one file to another for batch processing?
0
Automate Adding Individual Reveal All Mask to Many Layers in Photoshop?
1
Automating the export of layer combinations to a range of JPG files sizes (Photoshop)
1
How to export different crop sizes in Photoshop?
0
How do I re-size and place multiple images into a frame template Photoshop
1
Bake hue and saturation into image and maintain transparency