I have the clock hands below (cf. photo). they look very flat. i would now like to process them so that they get a slight metallic-black effect and become slightly three-dimensional if possible. The goal is that they are no longer just flat, but look a bit metallic-three dimensional. Do you know how I can do this...? Suggestions in Photoshop and / or Illustrator are welcome :)

Thanks a lot for your appreciated support! 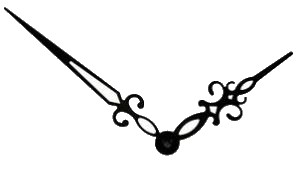 Your attached image has so low resolution that it's useless to insert any embossing to it in Photoshop. Illustrator gives more possibilities. The image can be traced there. Low resolution makes automatic tracing look irregular. But it can be fixed without redrawing by making few edits. The result can be 3D extruded. It gave this: 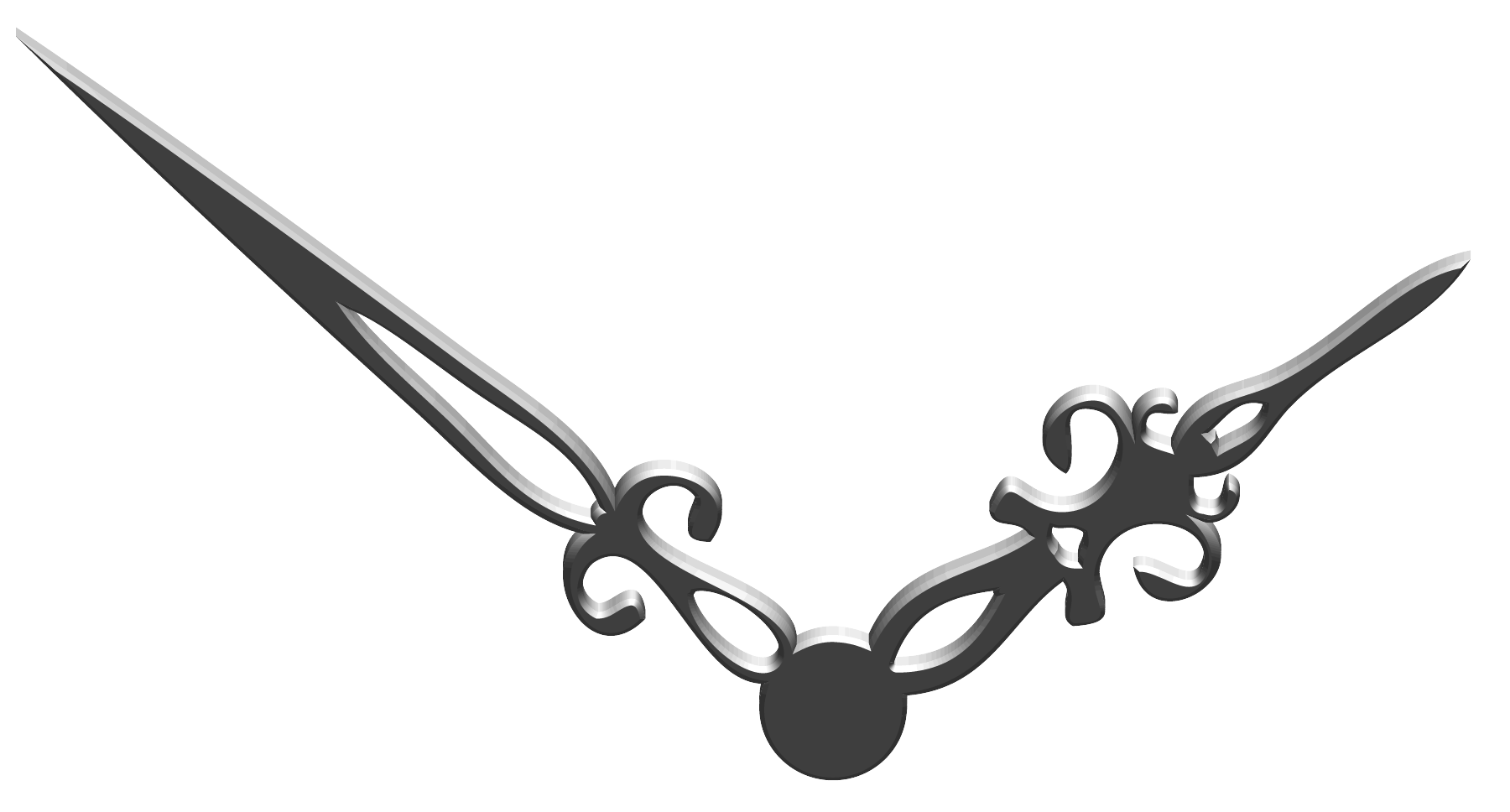 It's possible as well to paste the traced shape to Photoshop into a high resolution empty image. There one can get easily this (+ infinitely more variations with very little effort): 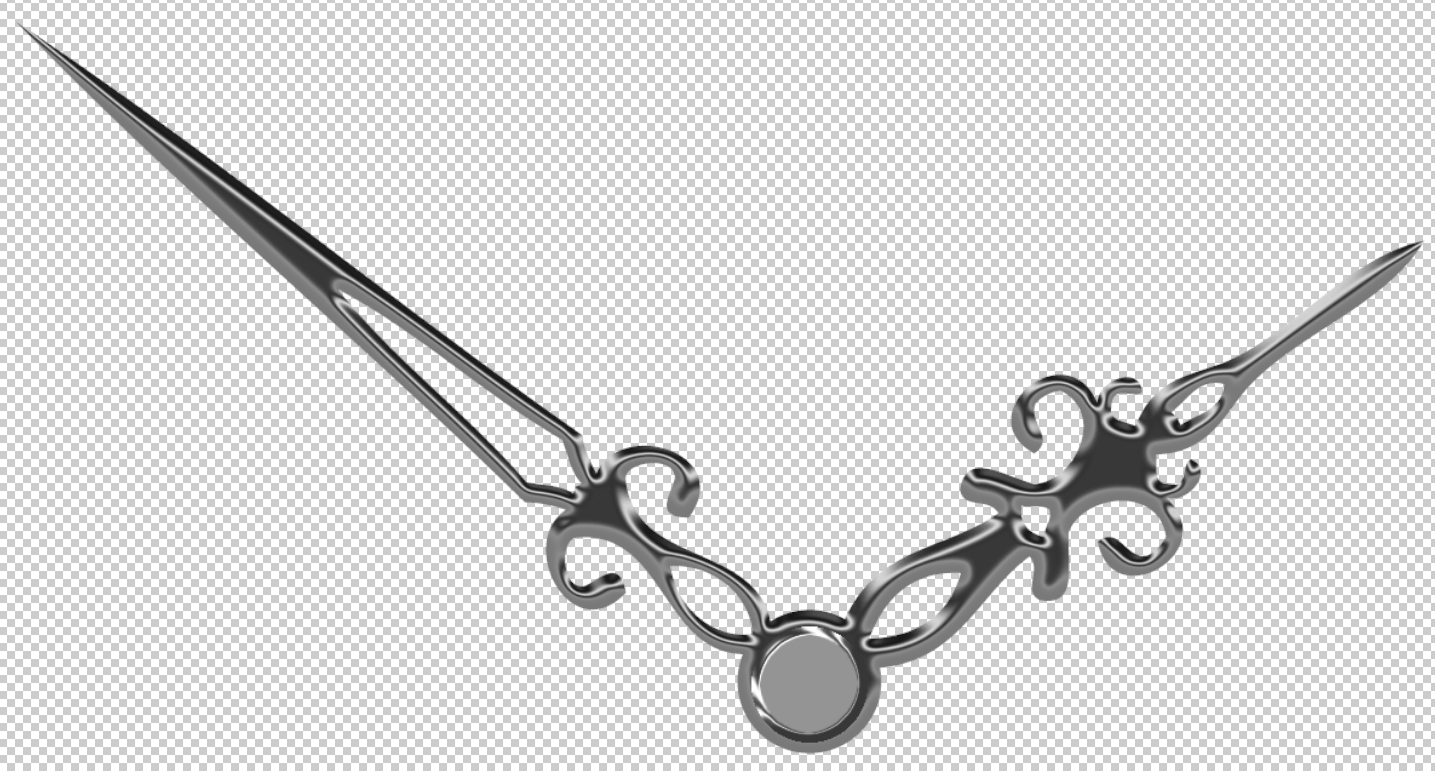 If you happen to have already a sharp high resolution version (1000 px wide or bigger) in Photoshop, make a version which has no background. The edges must be anti-aliased, but otherwise it must be razor sharp. Adjust its color with curves to 50% grey:

This is, of course, one of my tracing attempts in Illustrator (a less cleaned version, not the same as used in Illustrator version). It's pasted to an empty 1200 px wide image as pixels. It can be stretched to full size without losing sharpness if it's done before finalizing the paste operation. Pasting as smart object or path can be useful for scalability, but I avoid complexity here.

Layer style Bevel&Emboss creates apparent thickness and gives an endless number of variation possibilities. This is done with few adjustments from default settings: 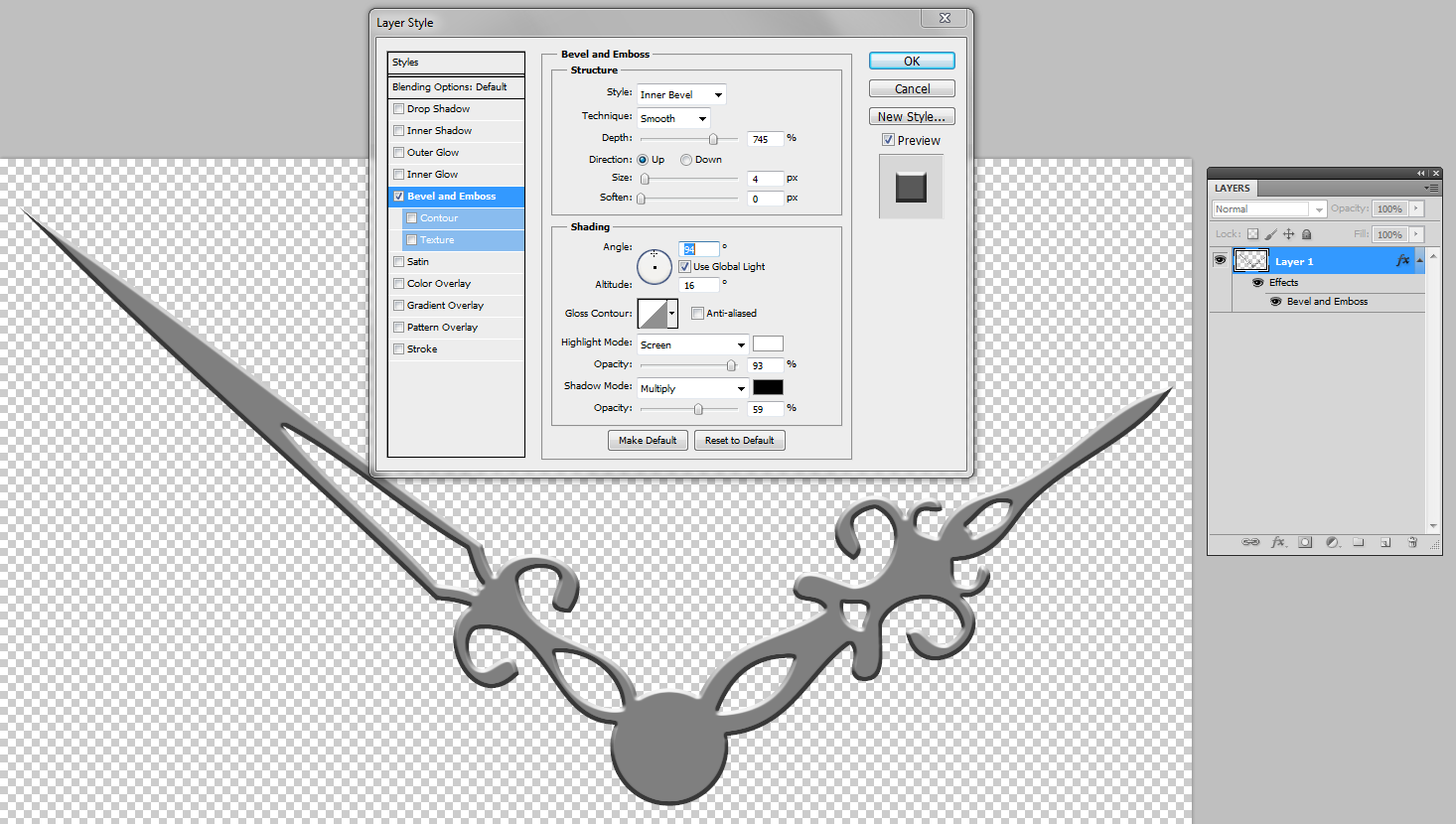 I avoid large full white or black areas to make the next step possible. It's fake metallization and blackening the grey surface with partial grayscale inversion. A curves adjustment layer makes it:

As said, the variation possibilities are endless. Here effects Bevel&Emboss and Curves have totally different settings: 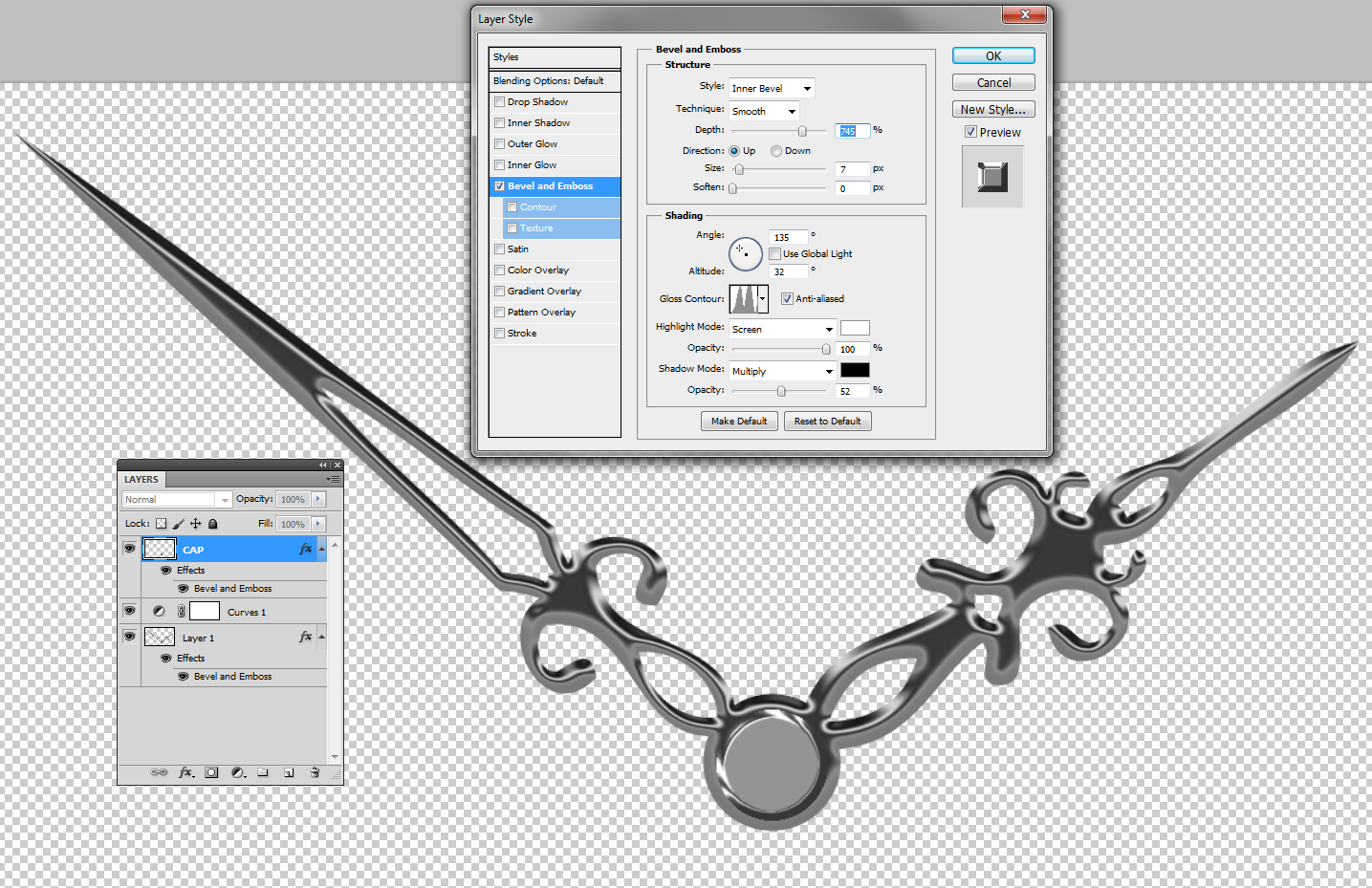 There's on the top also a separate layer (=CAP) which has an embossed circle as the end cap of the axle. It must have a different light to be seen.

You will not get richness like this as easily in Illustrator. There you must insert manually gradient mesh for shading. That's much work, but an experienced user surely gets what he can imagine. With Photoshop effects there's no need to be able to imagine all details beforehand. By making adjustments one has chances to meet a good result with very light effort (like me above).

One can think that a 3D model would be the key to more realistic results. It is, but the model must be realistic including forms and materials and the rendering must be photorealistic (not available in simple 3D programs). Finally a glossy metallic appearance is made as well by the environment as the model itself, so building the environment including the lights also will need some work.

As a development possibility I suggest the same that user Wolff has already said in his comment: Separate the hands to different layers. You can give to them a little different light to make them clearly separate. Different drop shadows would give to them different elevations from the background like in a real clock.

How to extract a vector from questioner's low resolution screenshot

The attached image is fortunately not the worst possible quality. For ex. it has good contrast and the JPG compression noise can just be handled by tracing settings. The edges are presented badly, but Illustrator's tracing with proper settings can make a path which is not unacceptably wrinkled. The hands are asymmetric: 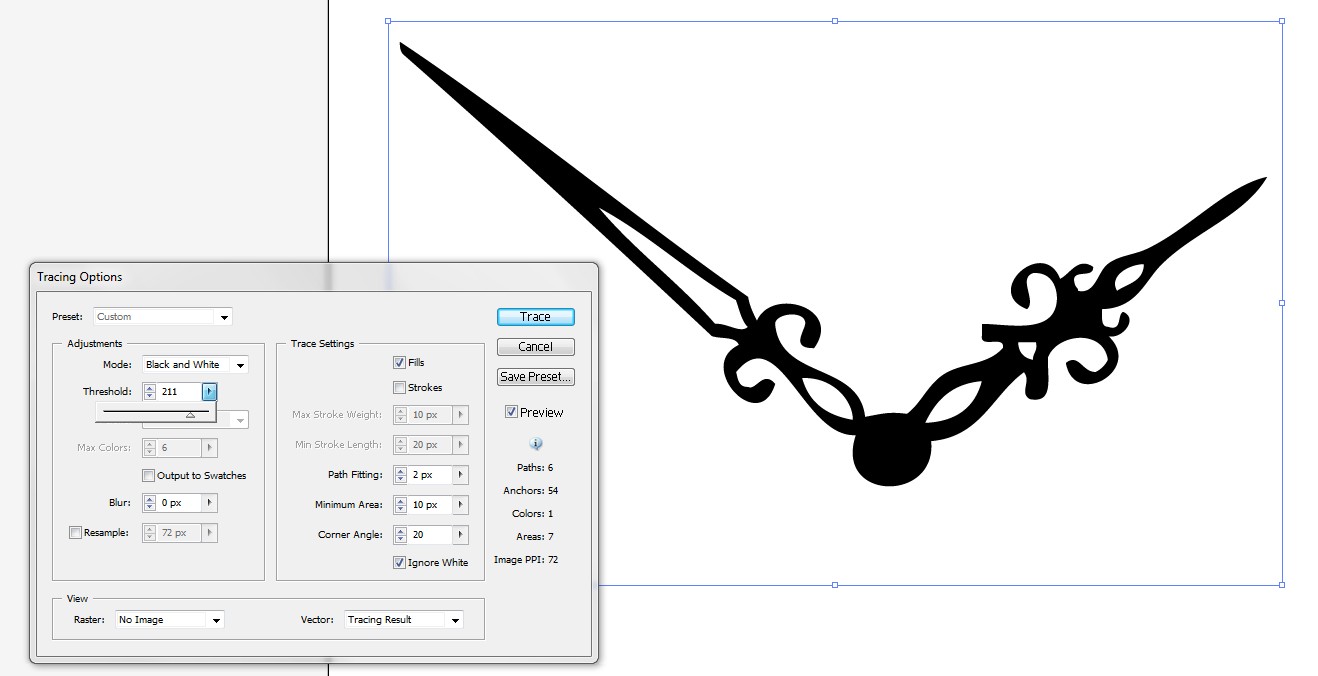 A competent Pen and path editing tool user would draw decent hands in few minutes. He would draw only a half of each and combine mirrored copies. The axis is a circle.

It would be a good idea to make the hands separate because you may keep them separate also when they are extruded to some thickness and avoid them to look one stiff piece. I skip that.

I expanded the tracing result to path and divided it to pieces with a few lines: 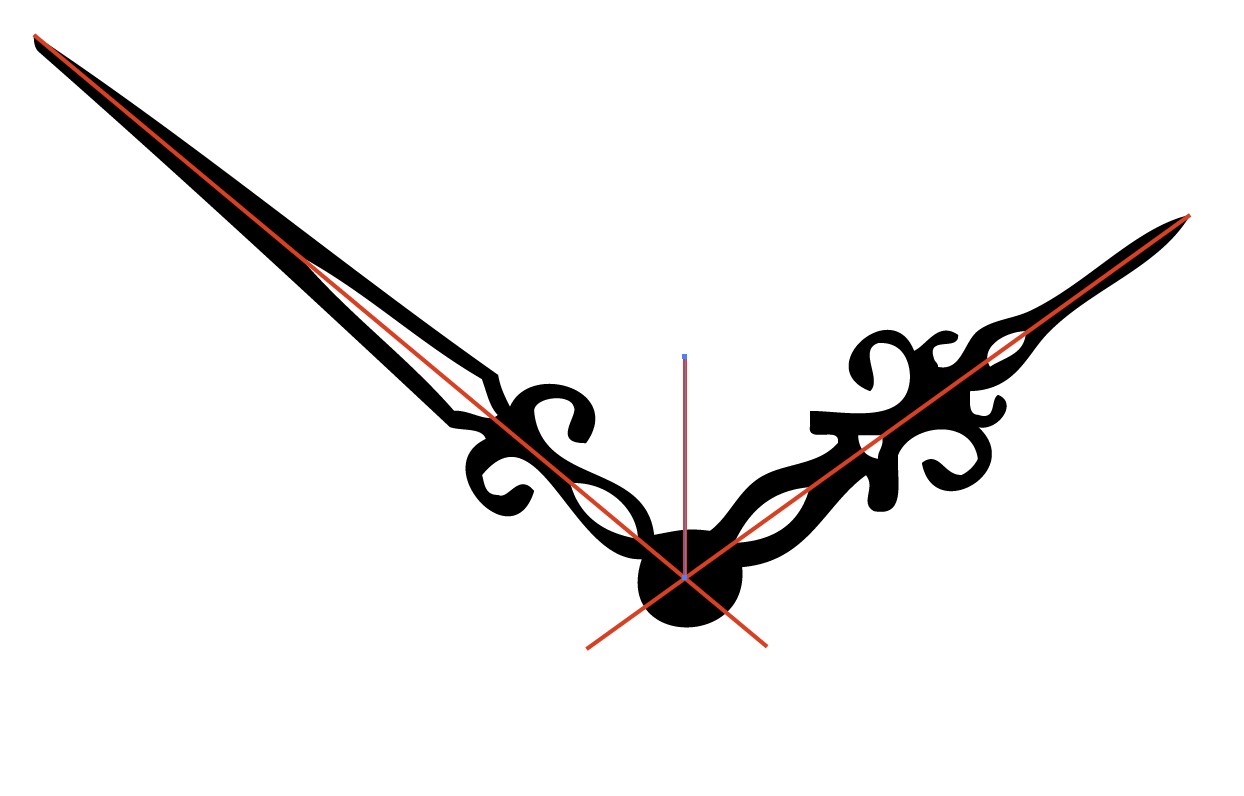 I deleted the halves which looked more crunched and made reflected copies of the marginally better halves: 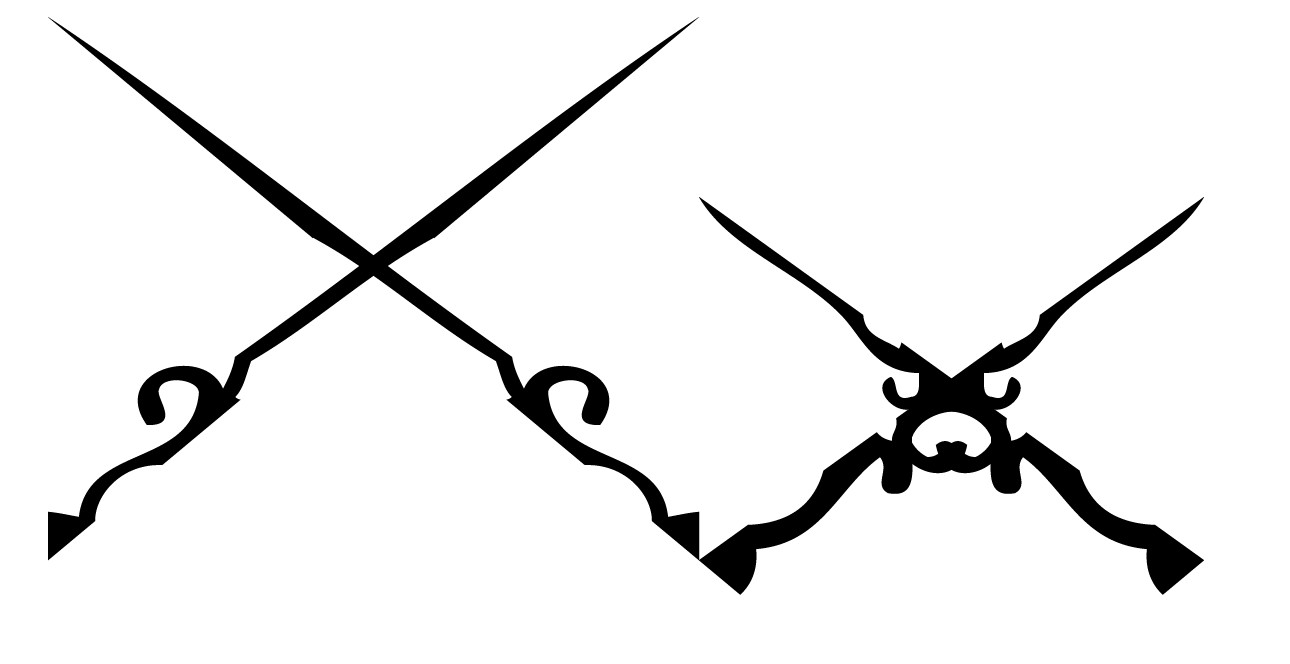 By having snap to point and smart guides ON the parts can be rotated and placed to fit exactly. Select a part with the normal selection tool. Hold the Ctrl-key to have temporarily the direct selection tool in use. Drag a node to to snap against a corresponding node in another shape. All other nodes will follow. Set the rotation center to the common (axis) node of the halves and move the other end to snap. I also deleted a couple of corner nodes which seemed to cause too sharp overhangs. Finally you have this: 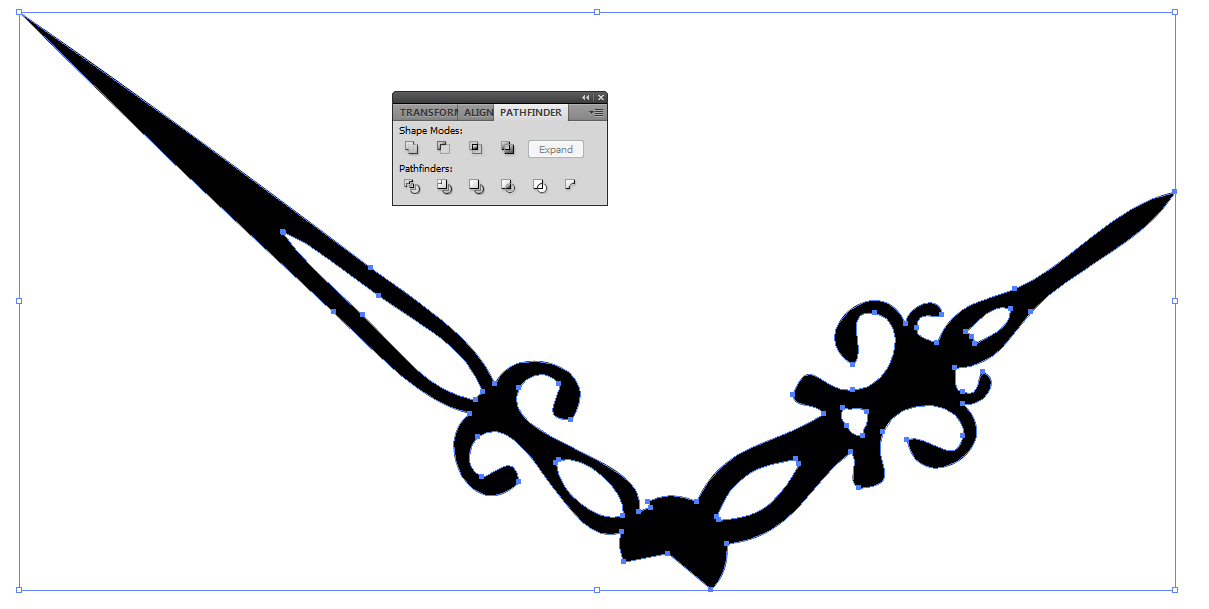 Insert a new mid circle and combine the parts. As said, for more realism it would be useful to add to both hands its own circle and keep the hands separate. I combine all for simplicity: 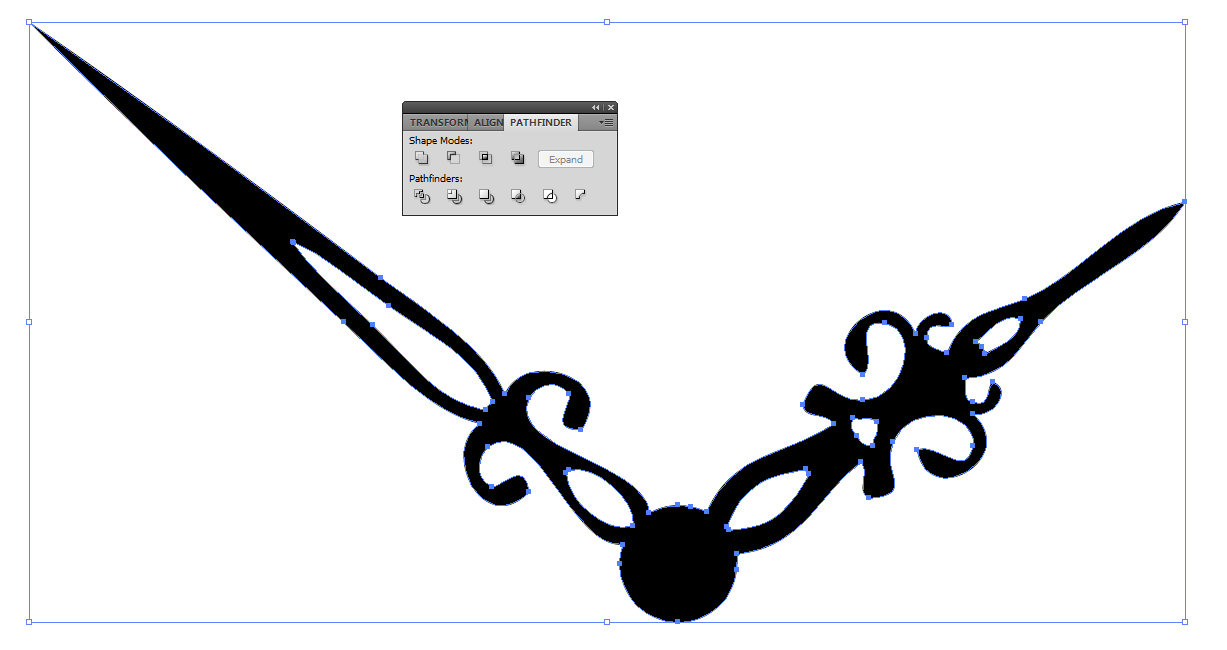 As you see, there's not especially many nodes. That's because the tracing was coarse.

The fill color should be changed to white for extruding. It makes the light setting easier. Here's the 3D Extrude&Bevel effect dialog:

There is a way to do this entirely in Photoshop CC, including a way to trace the image right inside Photoshop, so that it's vector. 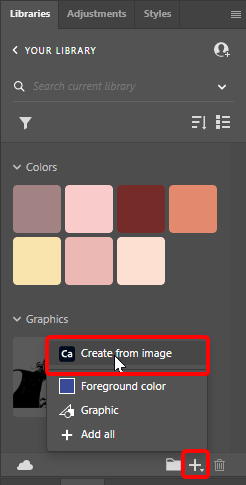 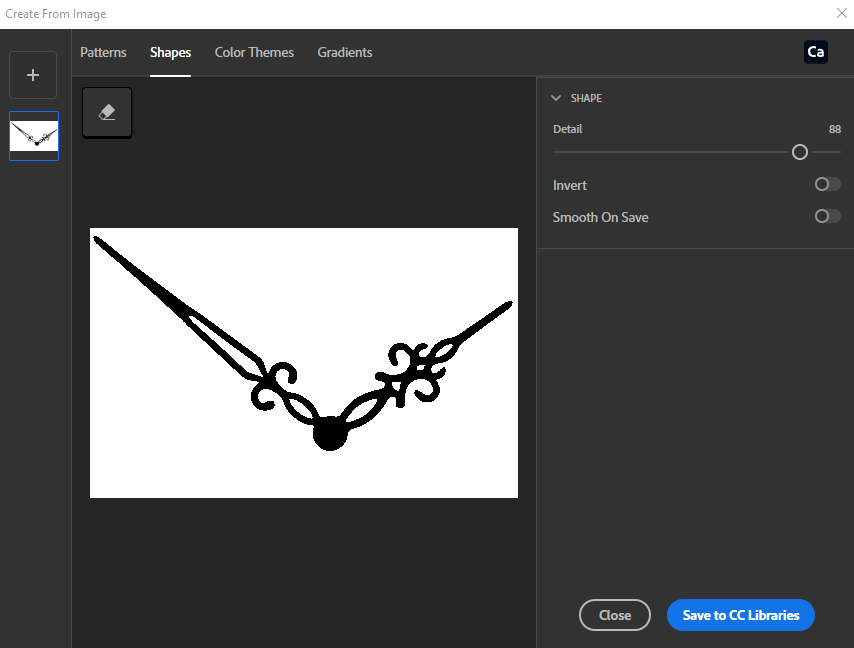 Now you have a vector shape inside your Libraries which you can click and drag into any image, and you can resize it without degradation (since it's a vector image). Apparently the CC Library uses Adobe Capture to make this possible

Not the answer you're looking for? Browse other questions tagged adobe-photoshop shapes photoshop-effects image-editing or ask your own question.

1
Gold shimmering texture effect for photographs
-1
How to make metalic borders like these logos in Photoshop?

7
Printing Visualization - Spot UV
3
How to replicate this die-cast metallic effect?
1
PSD layers are not showing when I open in Illustrator
0
Need help identifying effect used on a picture
0
Photoshop drawing effect
2
Is there an easy way to see whether an image needs "amount" or "radius" values adjusted, in Photoshop's "Unsharpen Mask"?
0
How can I fix printed colour problems with images designed in Photoshop?
0
Filling a blended texture into a rectangular strip in Adobe Photoshop CC