I'm in the process of converting the short story "The Region Between" by Harlan Ellison (part of the collection Five Fates), and among the many formatting nightmares, including a page written in a spiral, I've also come across this strange symbol:

In the story, it's used as an alien symbol. I'm guessing it's supposed to represent some sort of editing symbol or bullet, but I can't find it in charmap or with google searching. The book is from the sixties, so it's possible it's no longer in use. It's also worth noting that while it looks like two symbols, they're pretty close together compared with the regular kerning between characters.

I was originally thinking I could do a semicircle bullet next to a square bracket but the mystery symbol isn't quite a semicircle; it's about a third of a semicircle that, if whole, would be taller than the rest of the line.

If anyone knows what the symbol is so I don't have to inline the image it would make my eBook look a lot cleaner. Thanks in advance!

See the Wikipedia article on Pilcrow.

I've never seen anything like that before. Sorry. It could be something completely unique to the book you mention. You might have to face the possibility that it isn't a glyph from a font, or any symbol that has a name.

Anyway, you could stop worrying about it, and just draw it again using a vector image editor, such as Illustrator or Inkscape. 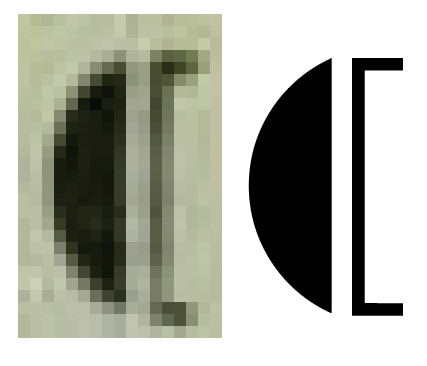 You could perhaps use something 'unreadable' to Western eyes, yet straight out of the modern Unicode character set.
There's a lot of, to western eyes, odd stuff between CJK & Arabic, these are mainly from Yi & Vai [which I have to admit to knowing nothing about.]
These are all present in the default font set on Mac, idk about Windows.

screen cap in case you can't see them…

Not the answer you're looking for? Browse other questions tagged typography symbols or ask your own question.