I am trying to recreate the following effect on a layer using filters but I wasn't able to achieve the expected result. 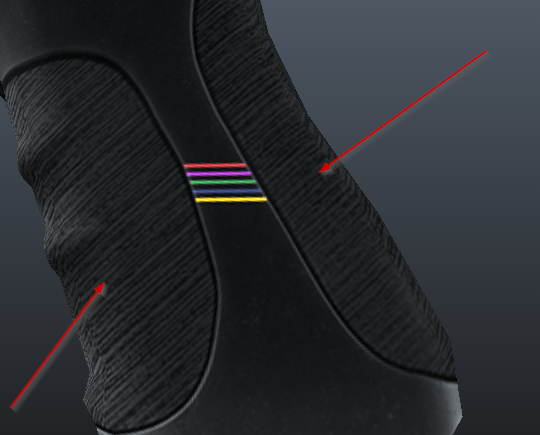 Could you please suggest a way of achieving this kind of effect? Thanks

In think @joonas nailed it in the comments. 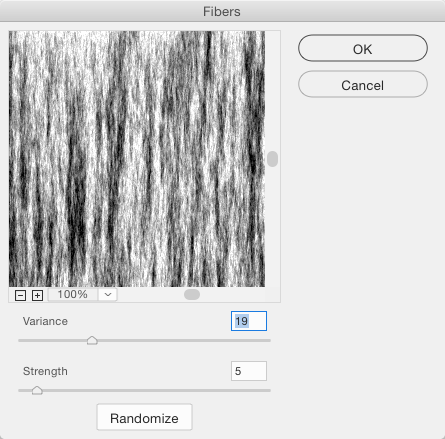 And over a "slightly less than black" layer, set the fiber layer to Multiply... 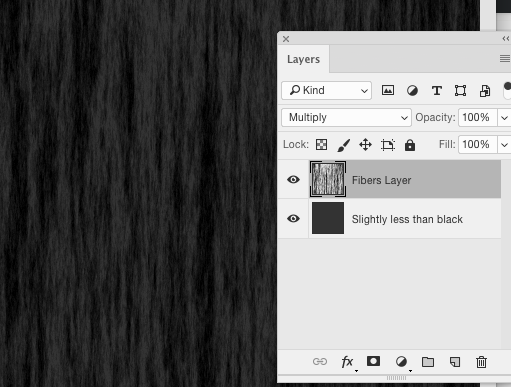 For some additional depth, you could merge these two layers and use Filter > Render > Lighting Effects... 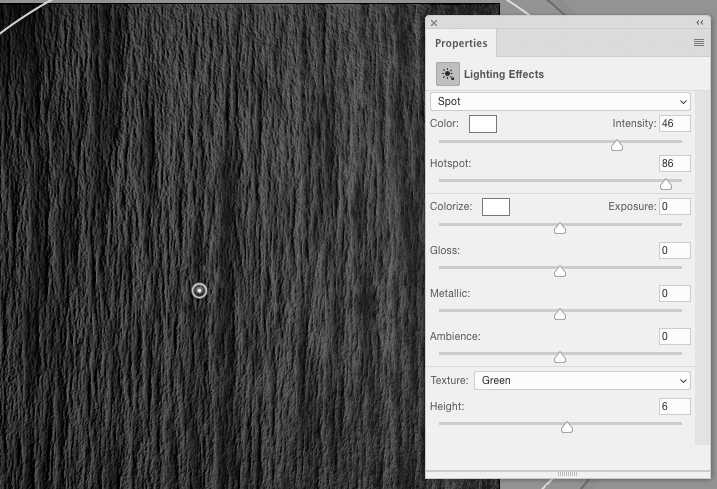 Here's one approach to generate something resembling in Photoshop.

The texture is actually very dark, unsharp and flat. Placing it on a 3D model (quite easy if one knows 3D software) or on a perspective drawing (a hard job!) pulls the attention off from the texture details. I have created a flat square filled with my version and pushed a couple of times with the Liquify filter brush to create some 3D like distortion: 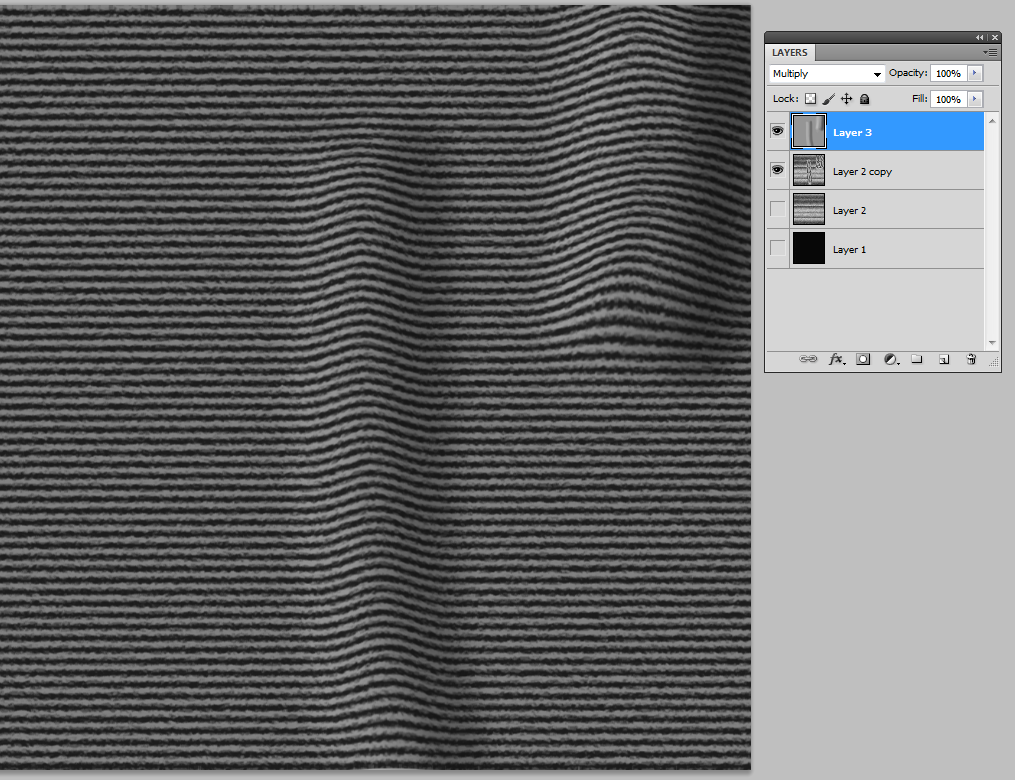 The top layer has blending mode multiply. It's filled with grey which makes all a little darker except the sunny side slopes are darkened less, they have got with a low opacity soft brush some white and the dark sides have got with the same brush some black. Without that shading layer it doesn't look at all 3D, only distorted (and causes easily some eye strain): 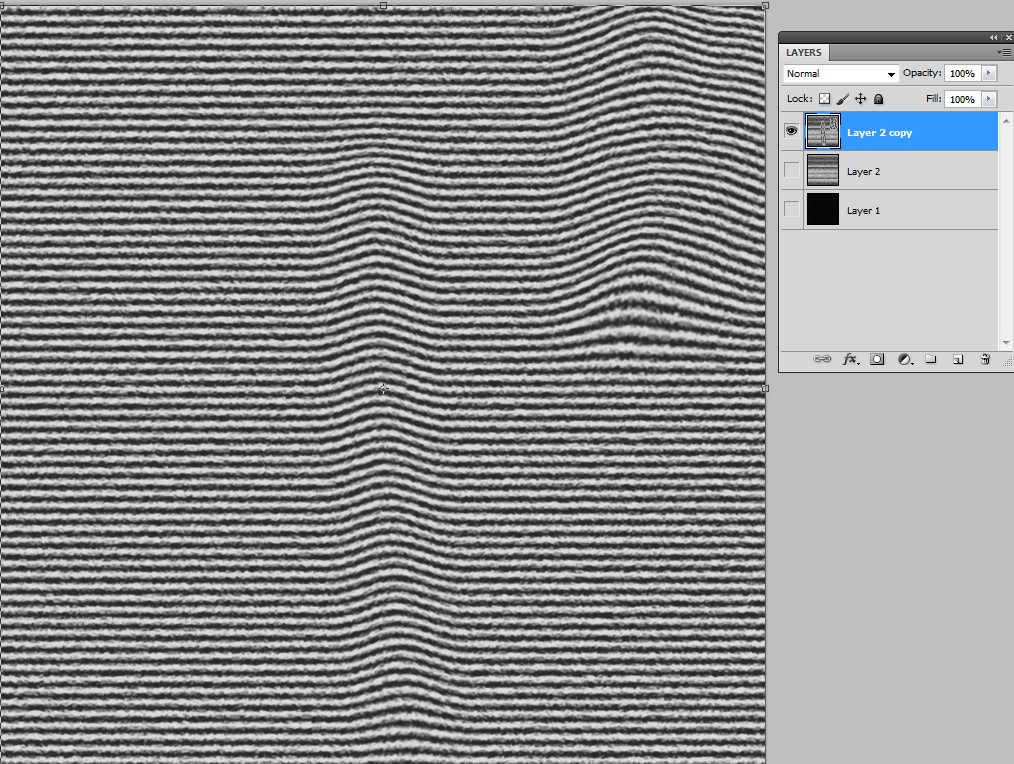 The texture image was originally a 1000 x 1000 pixels plat black layer. I painted a straight vertical stroke (hold shift) over it with a 10 px wide round brush. The brush has "spacing" which generates a series of spaced dots: 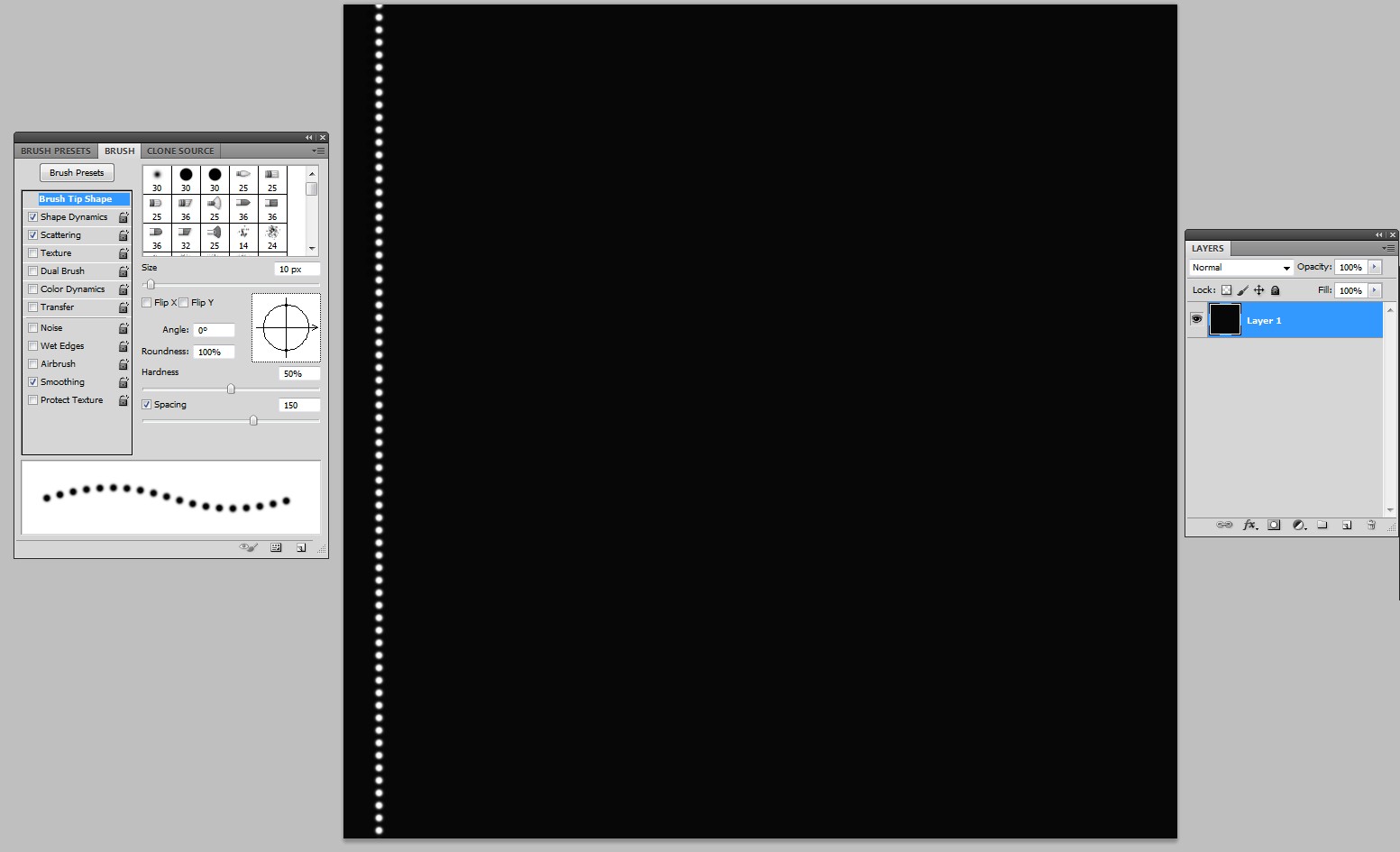 I selected with the rectangular marquee tool a narrow vertical slice over the dots, pasted it to a new layer and stretched the pasted shape to full image width: 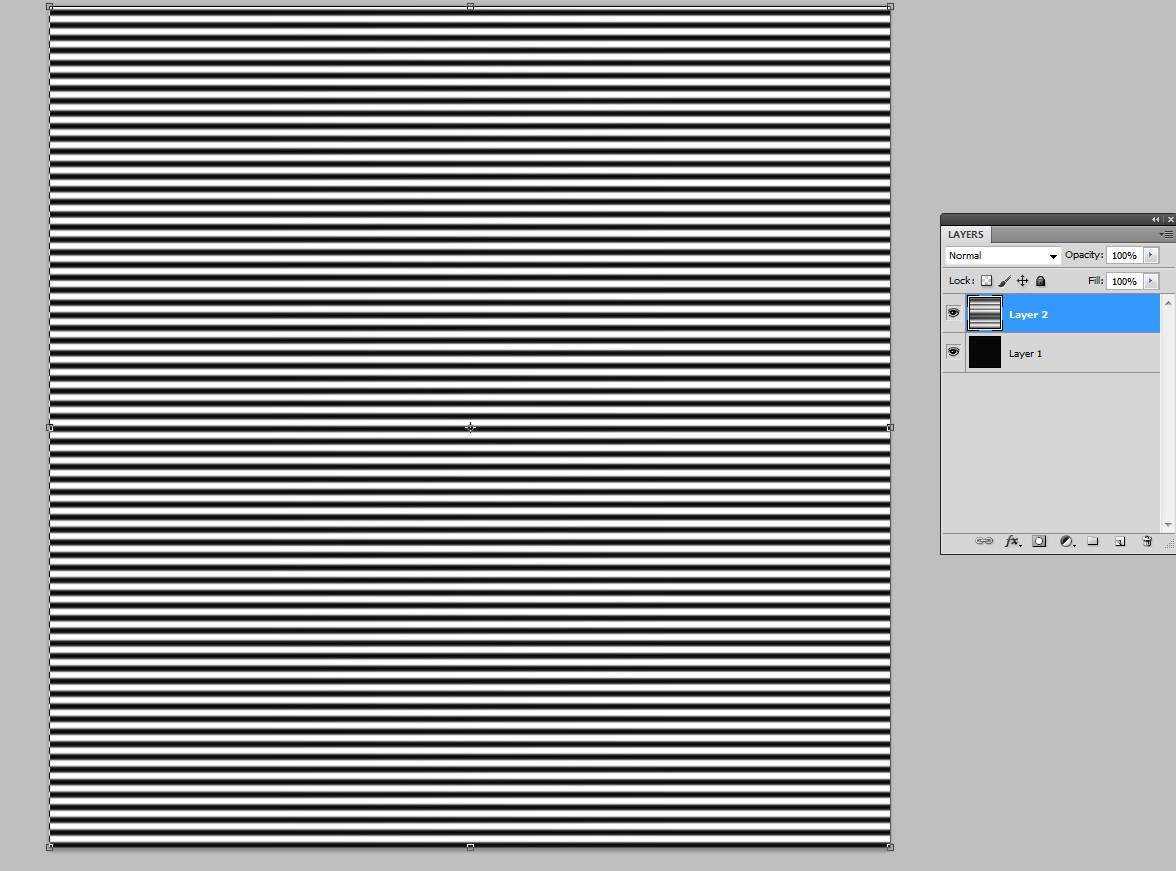 The original is now only a spare.

That's quite a perfect set of horizontal white lines on black. The same can be created in numerous ways. But you may want to get irregular line widths. It can be got by having some jitter in the brush settings. I skip it.

The roughness of the lines can be achieved by applying a distorting filter. This is Ocean Ripple. Sprayed strokes work, too. 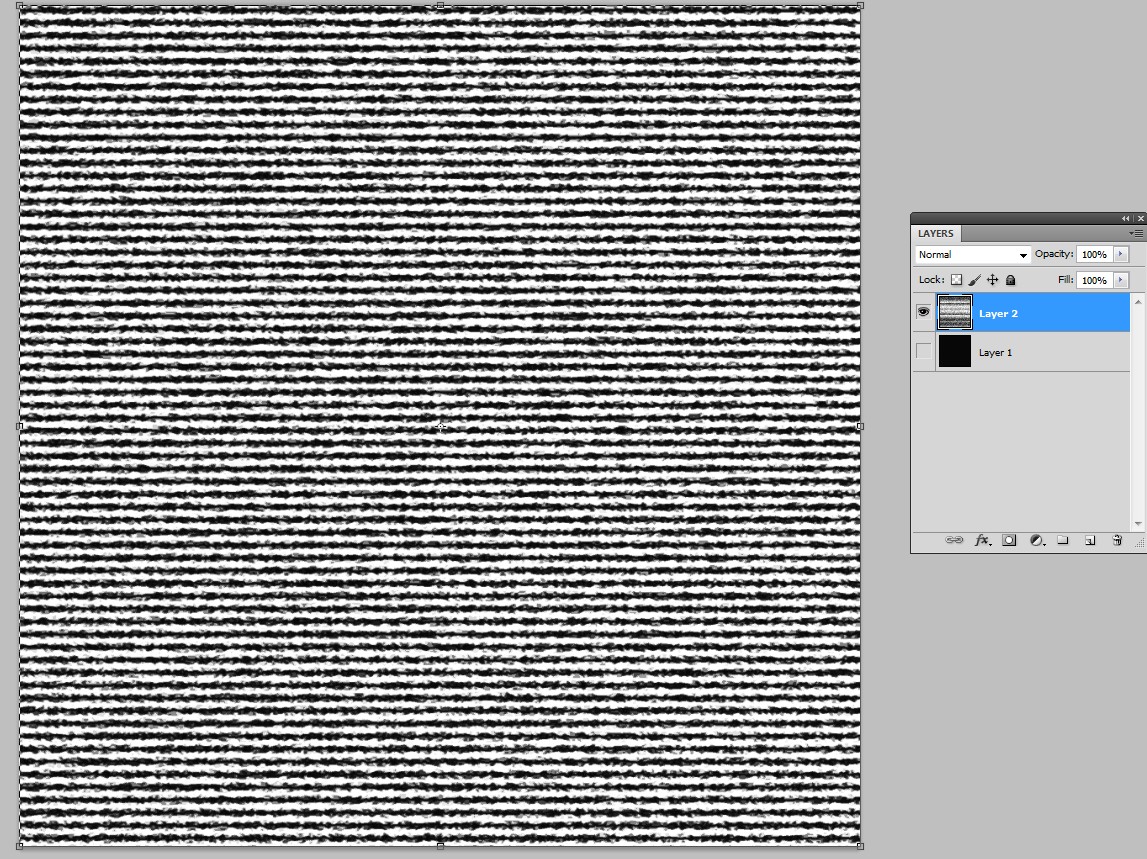 It's full black and white. It has zero apparent depth. Darkening with Curves gives some room to emboss if for depth: 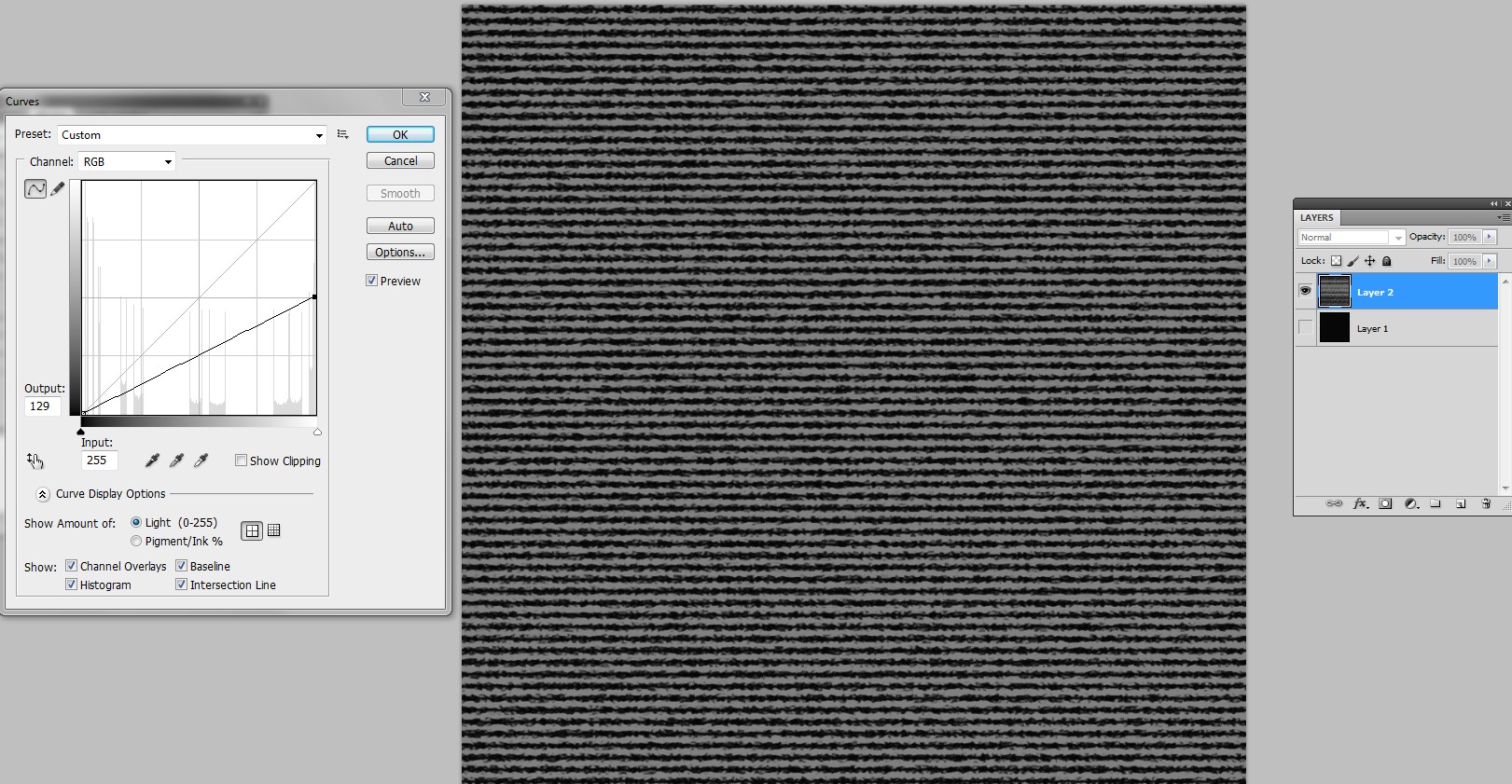 This is the embossing: 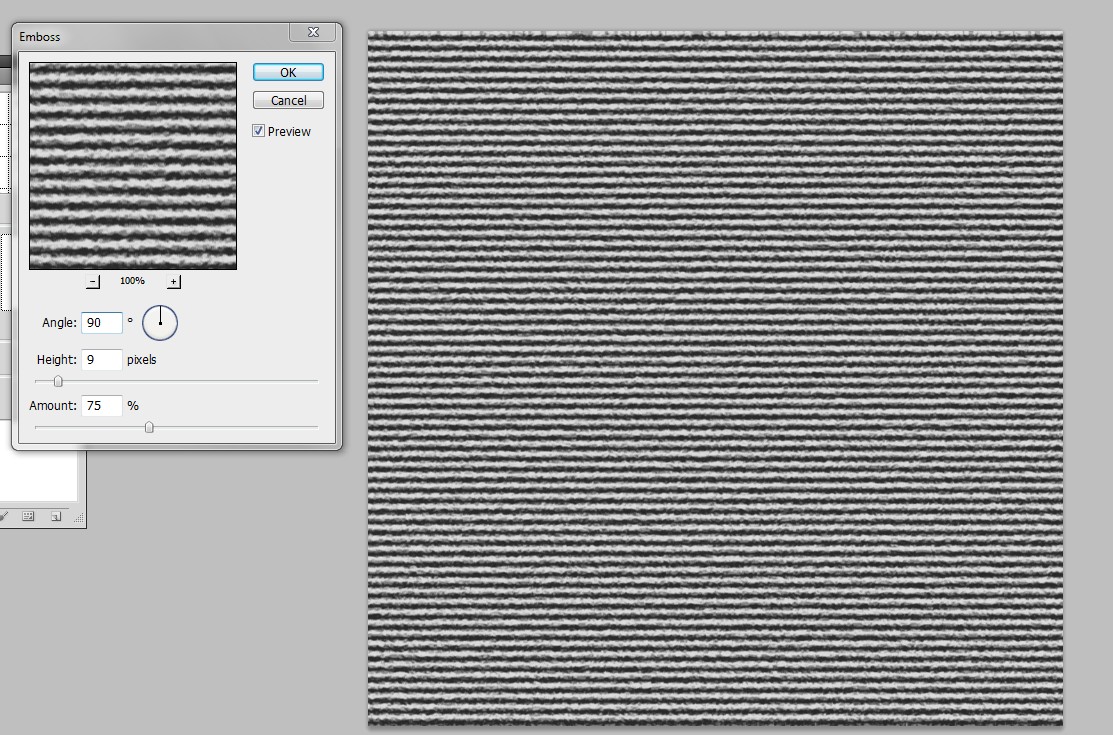 The embossing idea is to get ridges. The effect height is about the same as the brush width for it. Small height would boost every grain. I must admit that as darkened the effect is so small that its usefulness is quite minimal. It blurs grains making it look less sharp, but increases the overall contrast, so it must be darkened again. Here's a sample of full 100% deep embossing zoomed in: 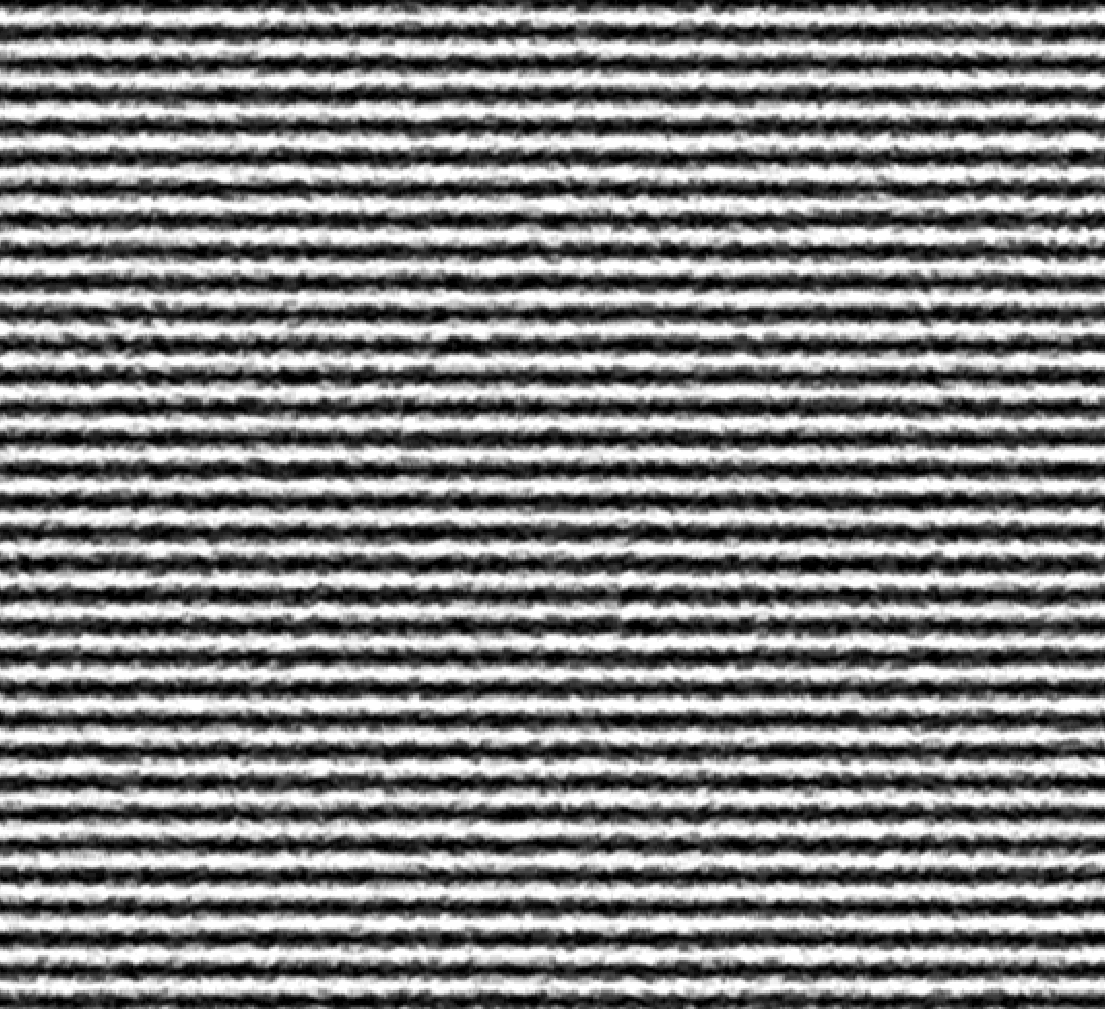 For a comparison here's a 2nd version. It has no embossing. 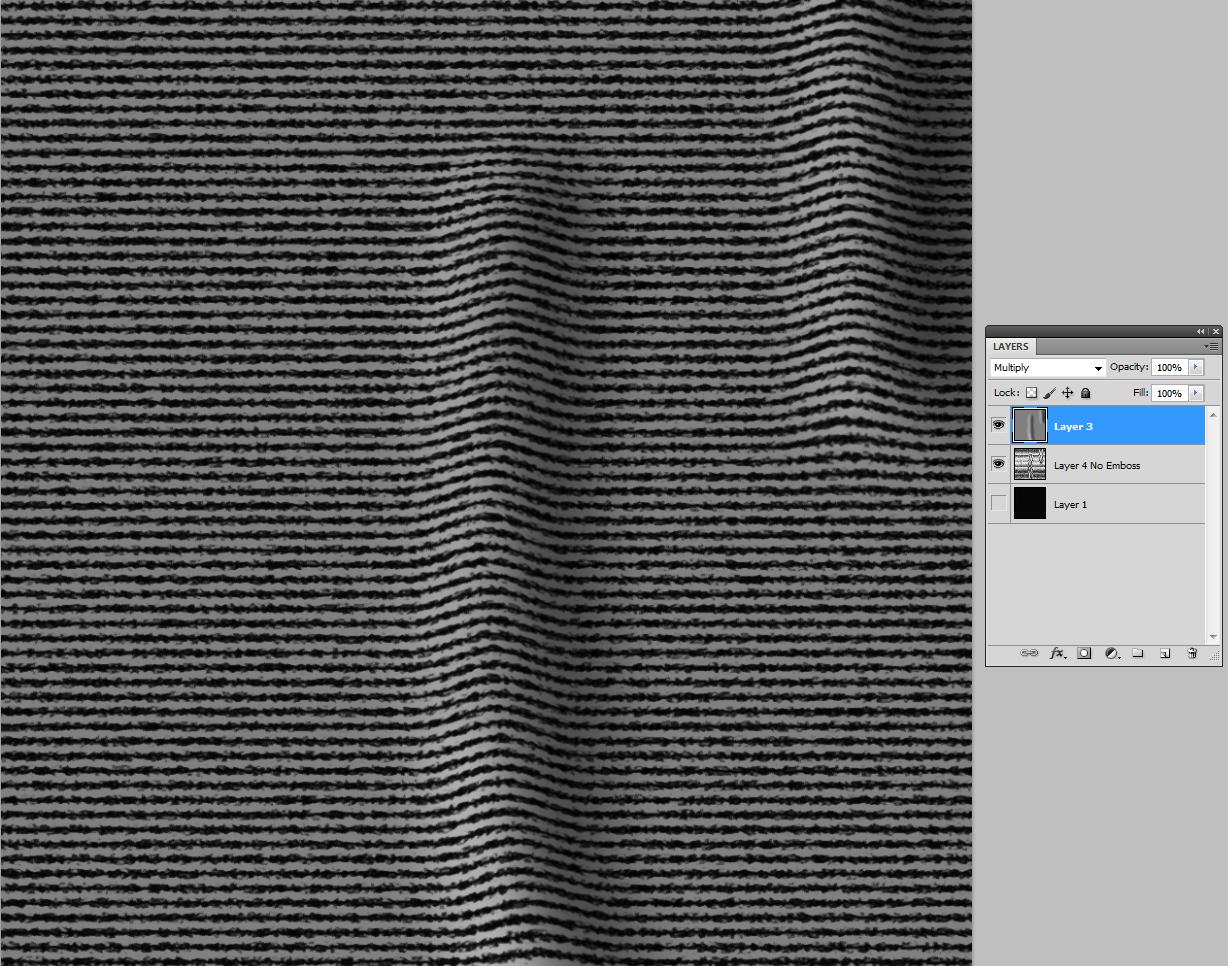 Just for your information: The top layer which creates the sunny and dark sides with blending mode multiply is this: 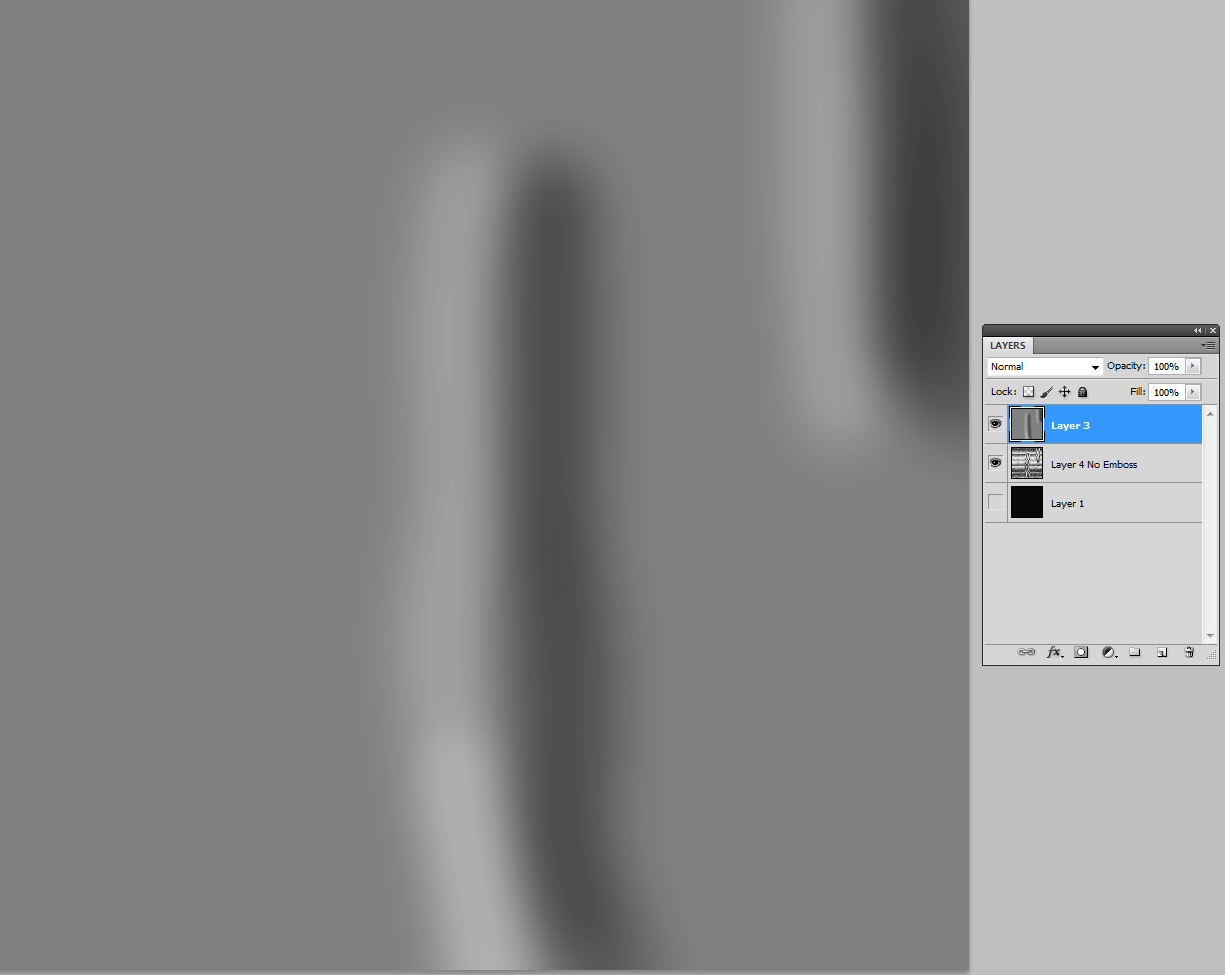 BTW. Others have already suggested that your example can contain a texture photo. I agree. This one is free: https://www.photos-public-domain.com/2014/04/09/black-and-white-striped-fabric-texture/ 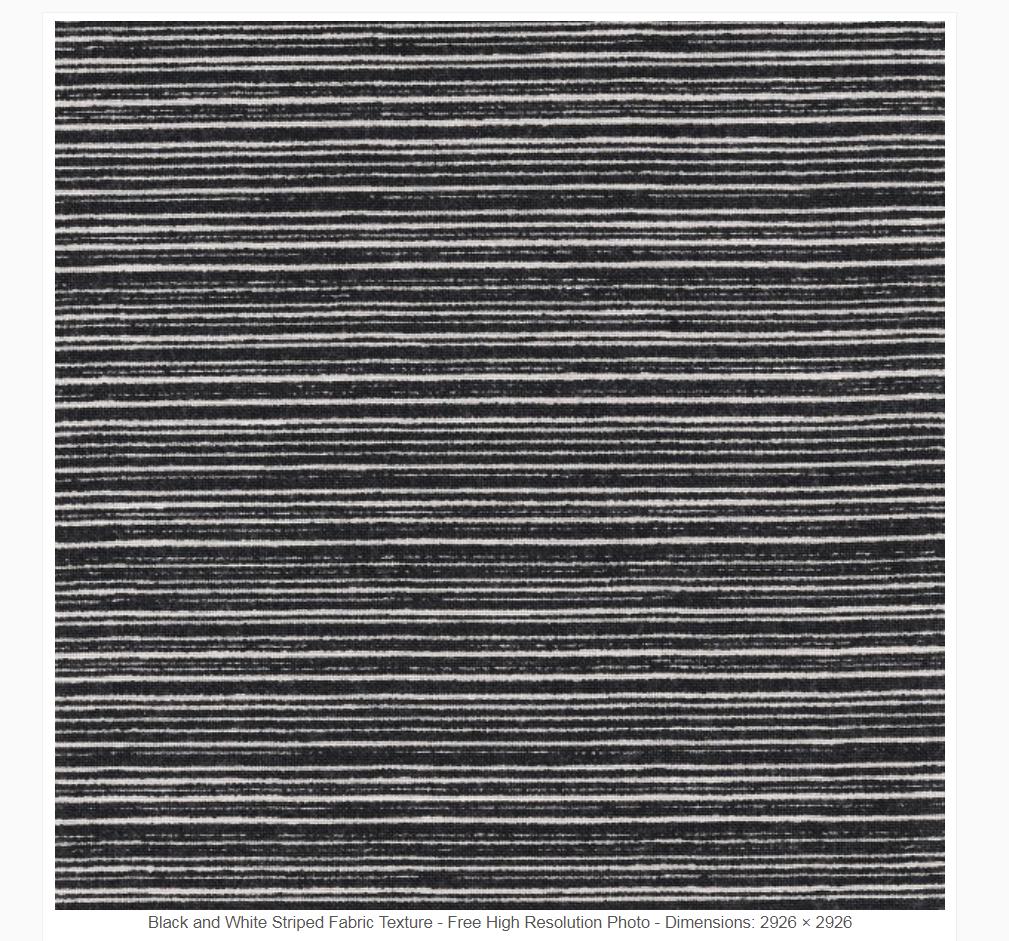 2
How to create this grainy & pixelated effect?
5
How can I create fruit's texture?
27
Removing grain from handwritten signature
3
Replicate Color Overlay
0
Remove pure white from images in Photoshop
0
How to achieve this melty glitch effect?
0
Multiple lassos not visible in Photoshop