I have a hollow closed path created by taking two closed paths and applying Path > Difference. I know the two paths are "identical", but one is an inset of the other. (This could be done with one of the Path > Offset tools, but that ends up creating curves I don't want, so I created this one by duplicating my closed path, giving the duplicate a wide stroke, Path > Stroke to Path, Path > Break Apart, delete outer path.)

I want to take matched pairs of these points and "cut" the shape into pieces. I've marked where I want the cuts with short red lines 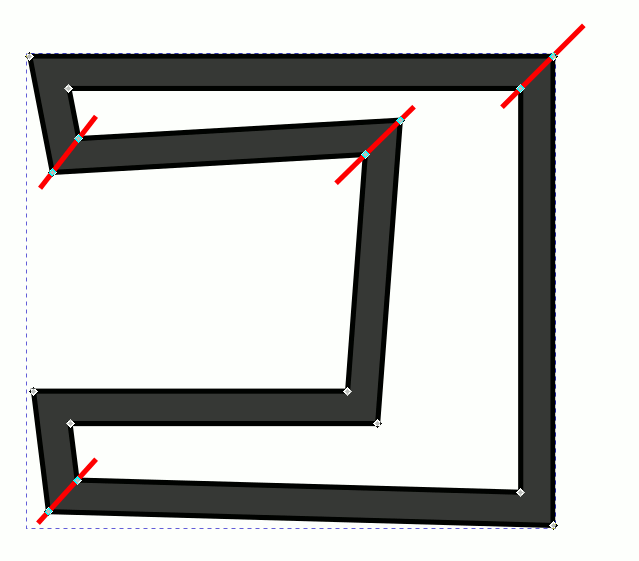 Is there a straightforward way to make these cuts, yielding 4 non-hollow paths that together make up the original hollow path.

I can use Path > Cut Path with something like this, using the red path for the cut... 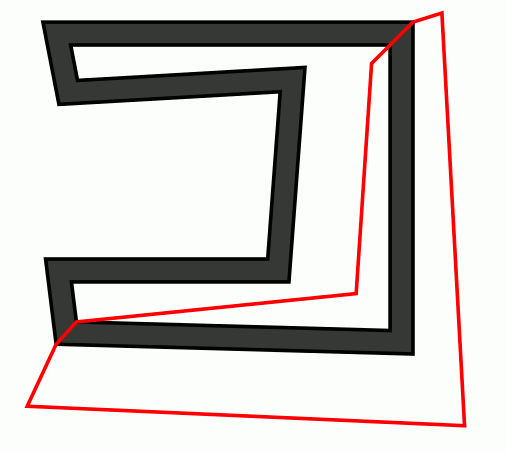 But that breaks the hollow path into the two original paths and I end up spending a bunch of time going node-pair by node-pair re-stitching a bunch of open paths back into closed ones.

Here's after I've make 2 of the 4 cuts and stitched together one of the 4 closed paths I eventually want. (I pulled it apart for illustrative purposes; they were all adjacent on initial cut as expected.) 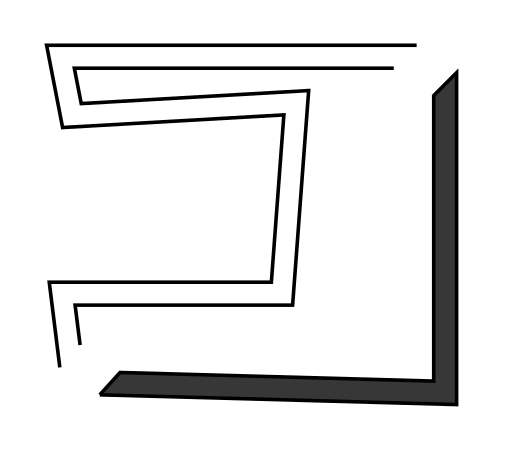 All of this feels suspiciously fiddly, like I'm manually doing something that Inkscape can do for me. I'd hoped that in "Edit paths by nodes" I could select the two relevant nodes and one of the toolbar buttons would break each of the nodes into two, then link the pairs of nodes to each other, re-closing path (and possibly splitting the path into two paths).

"Break path at selected nodes" followed by selecting pairs of nodes and "Join selected nodes with a new segment" seems promising, but is still what seems like a lot of busy work, and I don't know how I can reliably select the right pairs so I get two ends as opposed to an overlap like this: 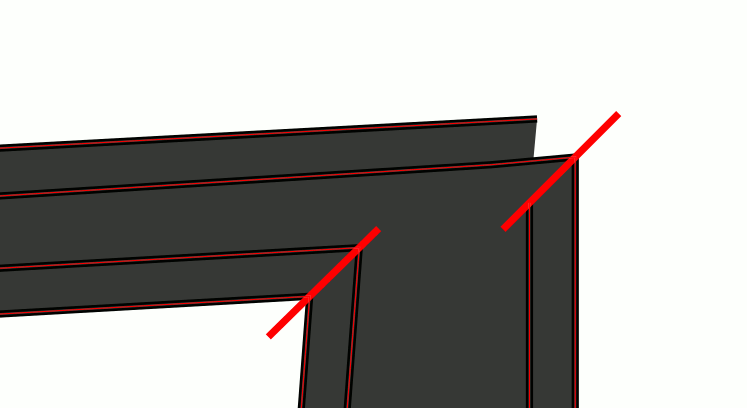 Is there an easy, or at least easier, way to accomplish what I want?

You were very close with the red path, but instead of 'Path → Cut Path' you want to use 'Path → Division'. This will cut the area of a path (instead of just path-segments) with another path like a cookie-cutter.

Also make sure to enable snapping and snapping to nodes to place the red path exactly on the nodes of your original shape.

28
How to extend/prolong and trim/cut a straight line or path in Inkscape
37
How to delete the path between two nodes, but not the nodes themselves in Inkscape?
5
Cut a circumference into parts - Inkscape
8
Automatically merge overlapping nodes in inkscape
6
How can I select all nodes of a path at once in Inkscape?
0
Break apart makes intersecting nodes not so smooth and creates an additional stroke
1
Inkscape - breaking object apart
2
How select the right node when two nodes are overlapping in Inkscape?
1
Cut path between intersection of open paths in Inkscape
0
How to move nodes along another parallel path in Inkscape