What is the correct UTF8 character for the apostrophes used in fictional (often alien) names?

I'm trying to typeset fiction which uses these. I've gotten used to doing curly quotes and making emdashes proper emdashes, but I'm not sure what to do with these.

These aren't contractions, so whatever they are they're not actually apostrophes. I have half a mind that maybe the okina (the Hawaiian punctuation) should be used, though I don't think anyone's pronouncing Teal'c or Za'ha'dum with glottal stops.

Is there a semantically correct character for this?

This question probably is unanswerable and might be closed, but I'll play along.

I'm not sure I ever fully understood why aliens have such an affection for adding apostrophes in their names. I don't get how I'm supposed to pronounce those names differently from if they didn't have apostrophes. But it has become a common practice in science fiction it seems.

It must be a matter of personal taste which character you use. We can't possibly make a general rule for typesetting fictional languages we know nothing about. And even within the logic of a given story it would seem a bit strange to have very strict typesetting rules when writing alien languages with our own alphabet, but that's just my opinion.

You talk about just using "curly quotes" like we normally use in contractions. I would call it a typesetter's apostrophe, but the Unicode name would be right single quotation mark (U+2019).

This is the safe choice in my opinion. It blends in unnoticeably. People who care about typography will notice you used "the right" character and people who don't won't notice anyway.

Using this might make it stand out a little bit, but my guess is that most readers probably wouldn't notice. There could be a risk that typography nerds would see this as a mistake or perhaps they would snap their fingers in acknowledgement of a tiny sophisticated detail. I don't know.

Using the real ʻokina character would look very similar and probably wouldn't be noticeable for most people not familiar with the difference. Also it seems a bit strange to me to introduce a Hawaiian character to write an alien language in English (if that's the language your story is in).

Another way of distinguishing the alien names from contracted words could be to use the regular apostrophe (U+0027) also known as typewriter apostrophe.

Again there is the risk that people who know about typography would see this as an error.

If you really need the alien names to stand out you could use some homemade symbol like these triangles (which probably resembles some existing Unicode character):

I don't really like that idea personally though. It would indicate that we humans had to invent an entirely new character to be able to write alien sounds. Would we even be able to pronounce such a hitherto unknown sound?

In the end, if you really are in doubt, you should probably ask the author if they had some special character in mind when writing the story. If they don't, you could present some alternatives for them to choose from.

From what I'm reading, there is no actual purpose to these particular marks in fiction which serve more as visual "seasoning". Some of these symbols do have actual purpose in real language but what they mean to alien characters is hidden in imagination. For the apostrophe, these symbols can be used - 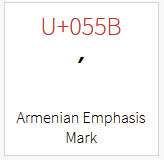 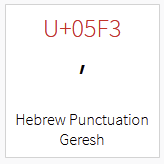 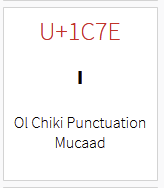 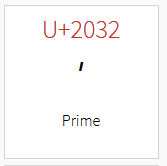 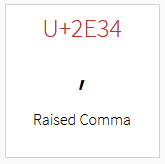 I've finally somehow noticed this, after searching for several weeks (and pissing off some of the moderators on another SE site).

According to this, the correct character is U+02BC ʼ MODIFIER LETTER APOSTROPHE:

It's description makes that really clear, as it specifically mentions transliteration but non-specific to any (human or presumably other) language:

[...] is preferred where the apostrophe is to represent a modifier letter (for example, in transliterations to indicate a glottal stop). In the latter case, it is also referred to as a letter apostrophe. The letter apostrophe may be used, for example, in transliterations to represent the Arabic glottal stop (hamza) or the Cyrillic "soft sign", or in some orthographies such as cʼh of Breton, where this combination is an independent trigraph. ICANN considers this the proper character for Ukrainian apostrophe within IDNs. This character is rendered identically to U+2019 in the Unicode code charts, and the standard cautions that one should never assume this code is used in any language.

(Emphasis mine.) Note that it mentions that the glottal stop is only one possible use, leaving this open to pretty much any conceivable phonemic/pronunciation.

This is in contrast to U+2019 ’ RIGHT SINGLE QUOTATION MARK:

is preferred where the character is to represent a punctuation mark, as for contractions: "we’ve", and the code is also referred to as a punctuation apostrophe. The closing single quote and the apostrophe were unified in Unicode 2.1 "to correct problems in the mapping tables from Windows and Macintosh code pages." This can make searching text more difficult as quotes and apostrophes cannot be distinguished without context.

(Emphasis mine.) This one is, of course, only truly proper for punctuation, which can be ruled out given that these names and nouns always seem to represent singular words without any indication that they are contractions (in the few extant examples of multi-word usage, such as Lovecraft's famous gobbledygook cultist chant, these are merely multiple words that are using it as a modifier letter of some type).

This late, I did not expect a definitive answer to exist, and certainly if one did exist either that I would be the one to discover it or that it could be anything other than "Unicode has no proper character for this. I've been through a bazillion blog articles describing the various differences of the apostrophe-like characters, and I must have passed this one by a dozen times reading through Unicode technical documentation.

I had gone so far as to have started a draft proposal to send in to the UTC, had it 80% complete only to stumble onto this while writing a section idiotically titled "Anticipated Objections". Ugh.

My proposal would have unceremoniously been rejected, and knowing what I know now, I don't think I could make even a bad faith argument that another character is warranted for this particular use. For the record, it was going to be UNSPECIFIED ALIEN PHONEMIC SYMBOL, in Latin Extended-F.

I'm going to let Wolff's answer remain the accepted (he answered with a well-considered and well-researched answer given in good faith, I appreciate that) and leave a comment under it directing anyone to come look at mine as well. Thanks everyone who answered/commented.

5
What is the correct name of this typographic pattern?
3
What is the font used in the Backbone.js Logo?
4
What font and characters are used for the "line break" symbol used in Microsoft Word
14
What font size should be used for a children's book?
1
What script font is is used for the Villa Rheinblick logo?
70
What’s the right character for an apostrophe?
18
What’s the right character for a minus sign?
1
What's the correct use of commas for ALL CAPS title?
5
What is the correct use of quotation marks for very long spoken texts in a novel?