Hi everyone I have a weak PC, so when I transforming my AI design which has outer glow, my PC just do the rendering forever, so I decide to make the outer glow in Photoshop. I export my design as PSD with all layers in 300 ppi and open it in Adobe Photoshop.

The export has the same layers and PPI 300ppi (Just like in AI) and I create in there free shape and add to it a outer glow using photoshop effect.

From the side it looks the same, but technically I not sure is my effect the same, if I save my design with glow effect directly from AI.

Is both ways have the same result(Quality and PPI) in the end?

I can't comment on the overall workflow without a full understanding of it... which I'm not going to get via small comments here.

My point in my comment was... I, myself, tend to hesitate to mix applications merely because one aspect of one design is taking time to render. It seems to me that you are creating more work merely because AI can be slow to render.

To me it would be like microwaving a steak because the BBQ takes too long to cook. Sure they both will work.. but one method just clearly results in a more satisfactory outcome.

Quite honestly, I'd suggest waiting for AI to render the glow as opposed to moving to Photoshop. You can reduce the PPI of the Effect > Document Raster Effects Settings while you work to speed up render time. Then simply reset it back to 300ppi before output. Or use layers in order to toggle the visibility of the object with the Glow effect applied to it. If it's hidden, you won't be waiting for it to render with every action.

But still, if the render time is just, for some reason, completely intolerable....

I'd suggest working smarter... there are a few ways to create an outer glow-like effect in Illustrator. Some methods will render slower than others. Particularly those which rely on raster images and Gaussian blurring, such as the "glow" and "shadow" effects, render the slowest.

Without seeing any artwork or knowing what's being constructed, the best I can offer would be to find another way within Illustrator to achieve what you want. 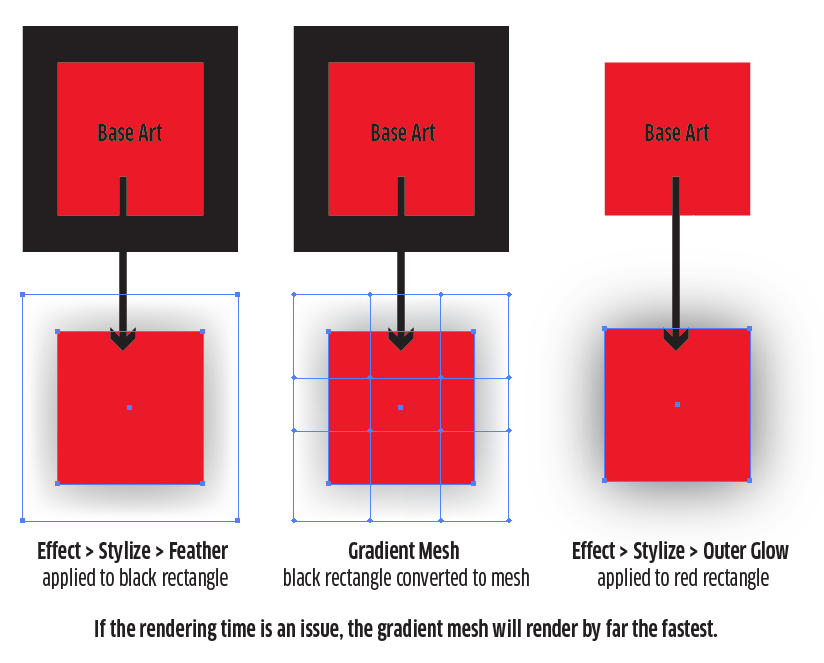 With the above posted..

Can you create the glow in Photoshop? Sure you can.

Will it be as good as the glow in Illustrator? Sure it will. (assuming proper PPI) In fact, because Photoshop has the capability of dithering gradients, Photoshop's glow may be a bit better.

Is it going to create problems with other parts of the artwork? or Will it disrupt the workflow to have a 2-application process? No one here can say definitively because we have no clue what the art entails or what the final goal trying to be achieved may be. A 2-application process can certainly be more disruptive than is necessary at times. Other times, the benefits outweigh the disruption.

I will separate my answer into several parts.

You are asking about the quality of the glow. But in the workflow you describe, it seems that you are rasterizing not only the glow but also the shapes that are generating it.

Depending on the process, the colors, the intended output, etc, you can, not only lose the ability to edit your main shape, but also have a blurry image, if you are, for example, upscaling it later.

Regarding the specific question of "quality" on a commercial print (screened, for example, offset print) a vector shape can generate partial dots, when screened, but a raster image will average the dots instead. This gives a sharper edge between shapes.

This might be a really tiny difference on a final print, but being very specific, yes there is a difference in quality in specific cases.

In the case of a simple blur, you do not have sharp edges, so there would be no difference in that regard. In fact, a blur could have a lower PPI density and work just fine.

Depending on your specific workflow, you could have a potential issue, for example having one rectangle with a rich black, and a surrounding with only black or different values of rich black. Just keep that in mind.

Some things you could do are:

Importing ONLY the glow, not rasterizing the main shape above.

Have the glow with transparency, staying aware of what the CMYK values need to be. If you are only working in RGB you will be ok.

Adding the glow to a simpler object. One reason the render could be slow is that you have a group of thousand objects. Make just one object of the outline of all the combined shapes. If you have just one object, see if you do not have many, many nodes. You could simplify the one shape that generates the glow.

Draw a glow using gradient meshes... (I stole that from Scott's answer)

Not the answer you're looking for? Browse other questions tagged adobe-illustrator adobe-photoshop vector photoshop-effects illustrator-effects or ask your own question.

1
Creating an arbitrarily styled text outline in Photoshop which updates if I change the text or font?
5
export layers with bleding options and shadow to PNG format using photoshop
5
Illustrator glow effect not shown in pdf after saving
2
How to isolate layer effects into their own layer
0
How to Export High Res PNGS more Efficiently
0
Logo in Illustrator to Photoshop for High-PPI Export
1
Can someone explain me the concept of image resolution in photoshop in relation to indesign and illustrator?
1
Saving from Illustrator to PNG in 300ppi
3
How to enlarge a mask in Photoshop non-destructively ("bleeding", "outer glow")?