How to make a mockup more realistic?

I was just trying to create a metal sign mockup for my project, and this is as far as I got. 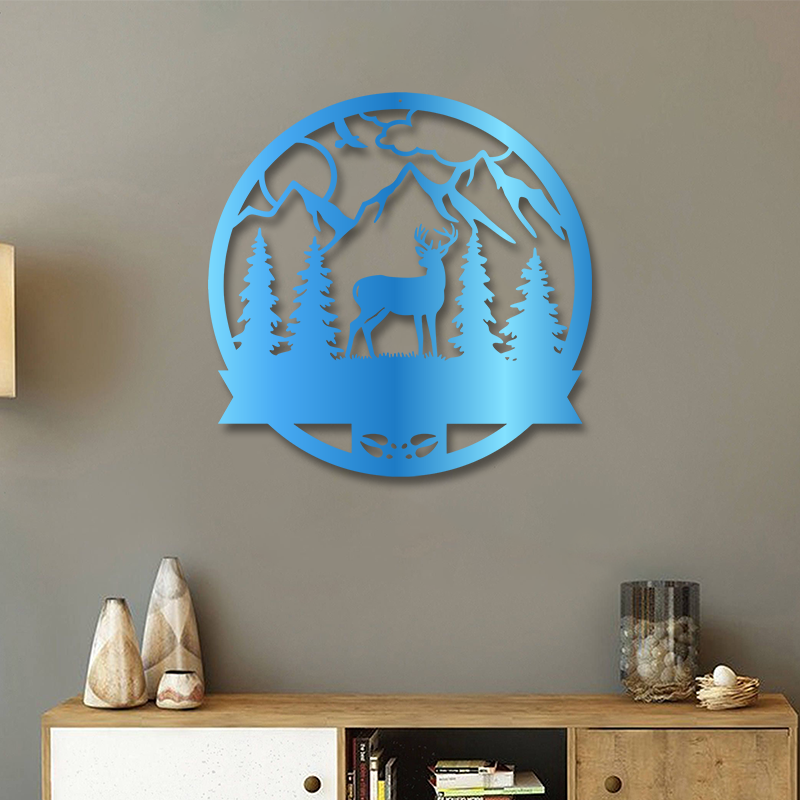 I'm not entirely happy with the result as it still looks unrealistic and out of place. Would anyone be able to show me some useful tips/techniques that will make the above metal sign fit in with the room and basically make it more pleasing to the eyes?

Below are the images I used: 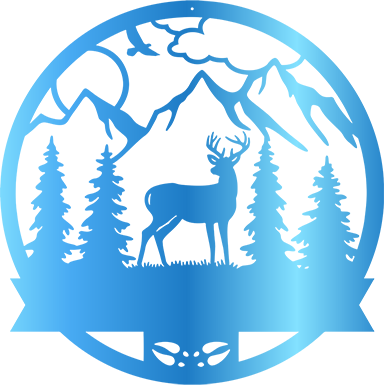 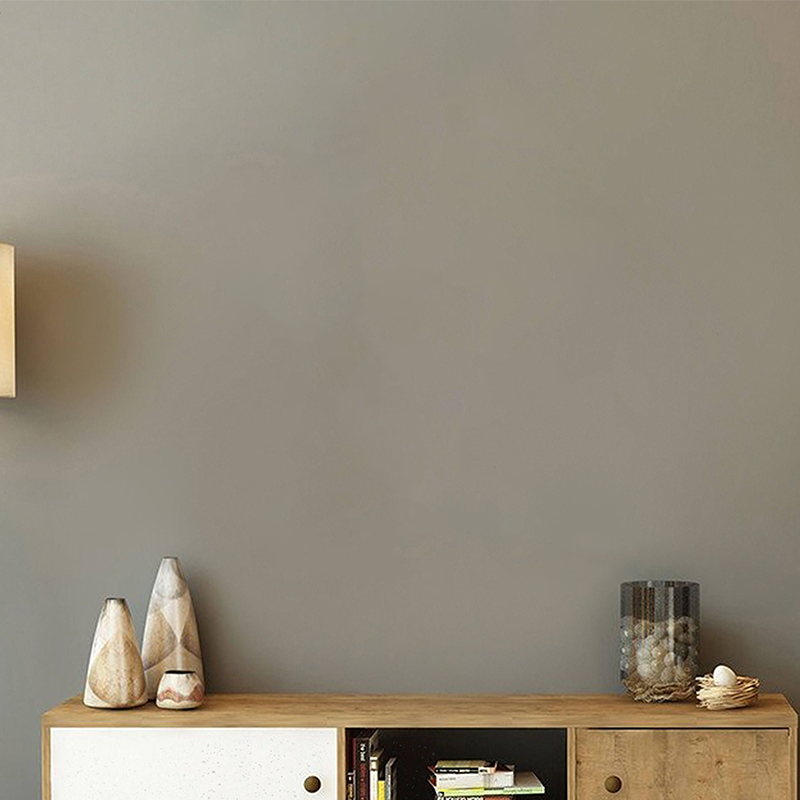 Nearly all essentials are already said by others, but a little more can still be inserted.

At first: if it's not colored to blue it shouldn't be blue. Gold and copper are yellow or red but steel and aluminium should be neutral.That means all color they have is reflected from the environment.

Let's assume it's made of neutral metal. How it reflects the environment (including the lights) depends on the curvature and the smoothness of the surface. If it was a perfect plane having all grains smaller than 100 nanometers it would be a mirror. You might have something like this: 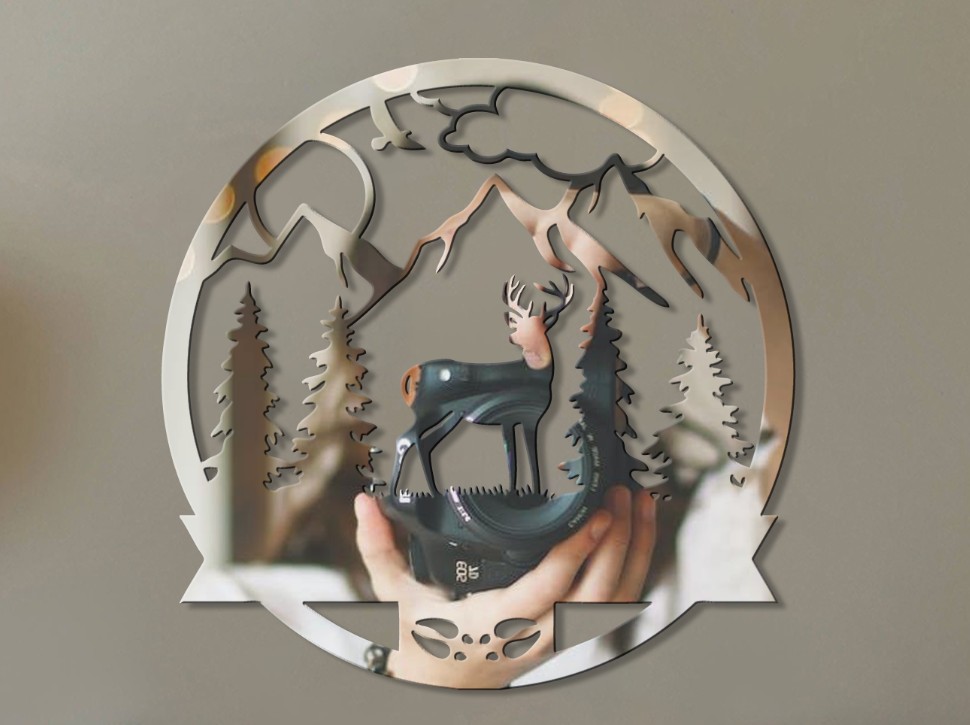 Nobody has suggested it, no matter it's quite obvious. That's because it's too obvious and would very likely be seen as catty sophistry. It would depend fully on the mood of the moderator how long one's account would stay closed. So, I skip it, too.

Let's start from an uniformly 50% grey piece and let it get gradually more light and reflections: 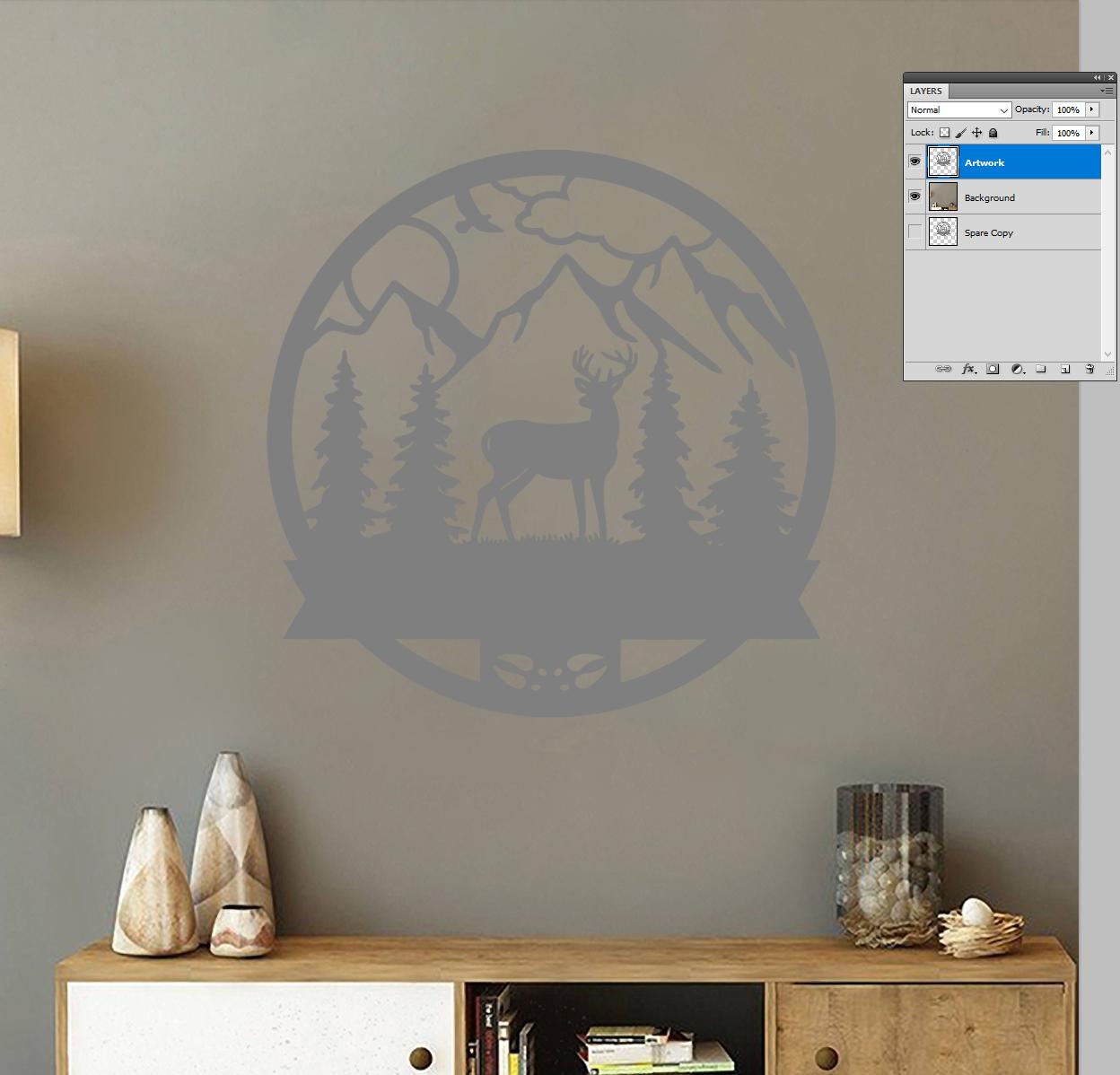 It's more like painted on the wall. It's too dark to be plain metal and its color is anything but neutral when compared to the appearance of the background. The simplest way to make it more metallic is to change the fill color to a gradient which is in harmony with the background lightness reduction from left to right. No detailed environment reflections are needed if we let it look planar but matt. The colors must be taken from the background photo. otherwise it will not look uncolored neutral metal. 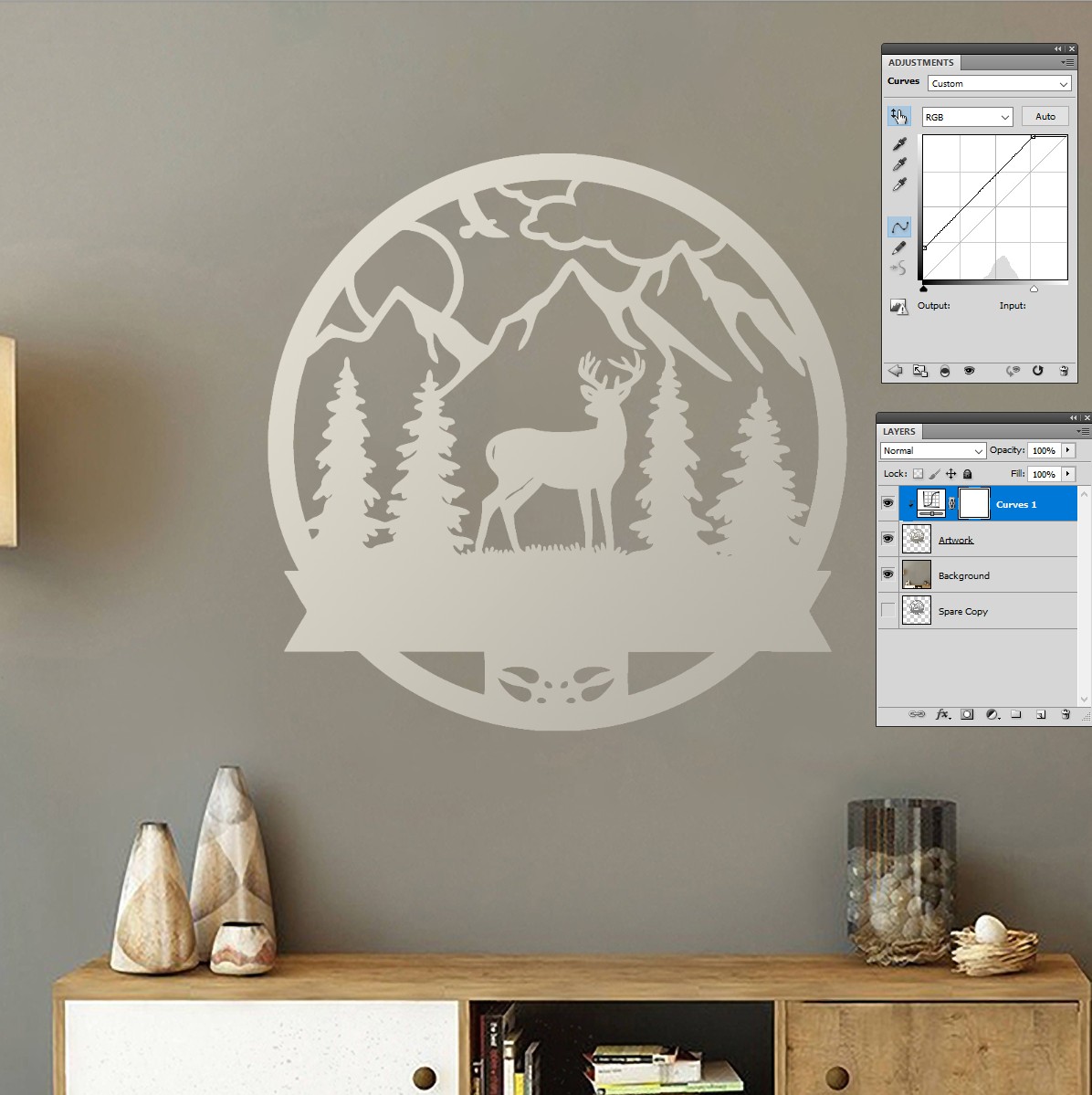 I have a spare copy of the artwork. I used it to make a new version. I clicked by holding Ctrl the image icon in the Layers panel to make a perfect selection and filled with a gradient the selection in layer Artwork. (See NOTE1)

The gradient start and stop colors were picked from the background wall. The curves layer was inserted on the top to lift up the brightness. Note: The next layer only switch is ON and the curve is 45 degrees tilted straight line, only lifted the ends upwards to insert brightness but not changing the apparent material color (see NOTE2)

It's still like it's painted on the wall. Layer style Bevel&Emboss gives some apparent thickness: 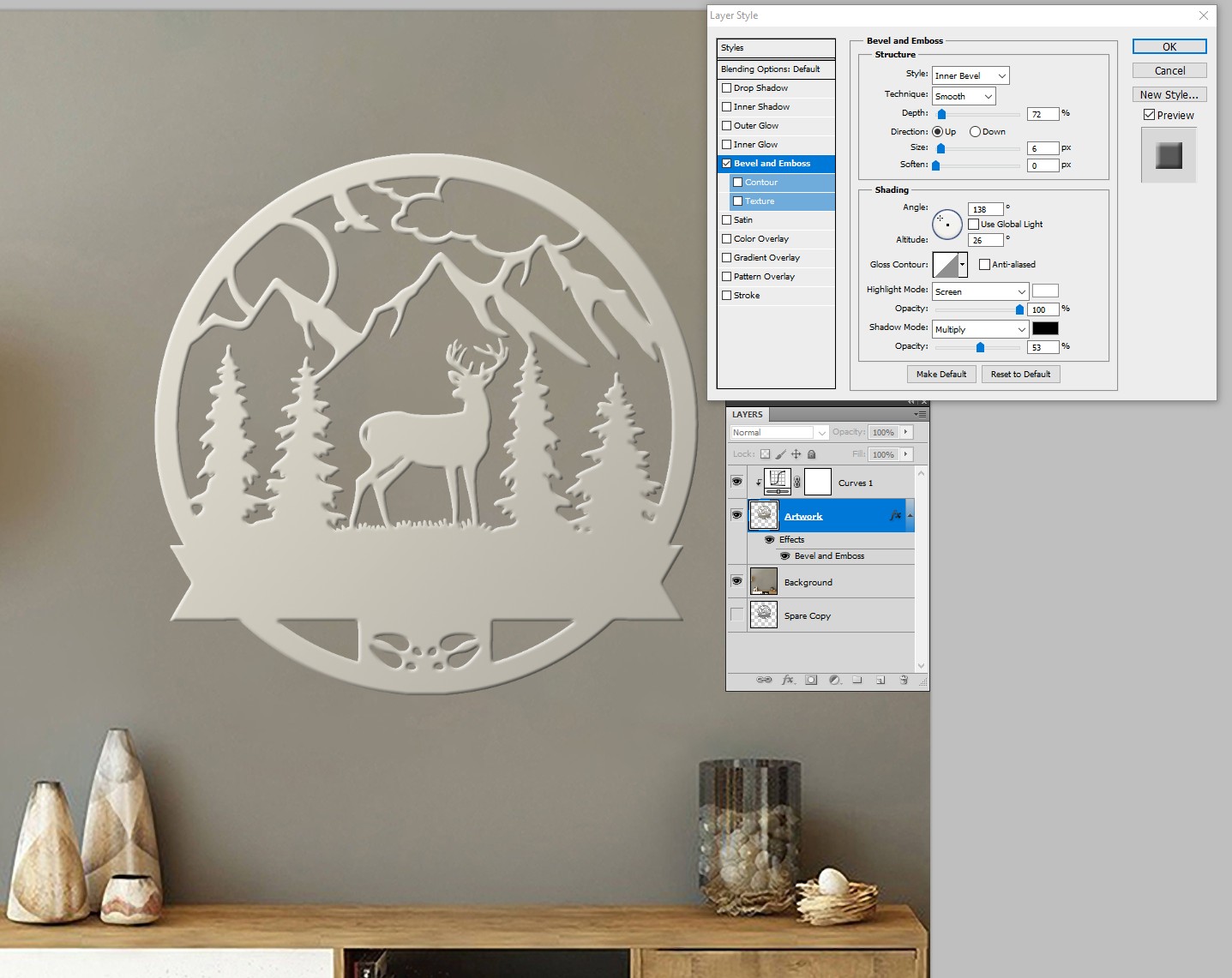 That simply makes the edge areas lighter (=white with blending mode screen) on the sunny side and the shadow side edges are made darker (=black with blending mode multiply). The original colors must be far enough from white and black to allow the effect.

Layer style Drop Shadow creates apparent gap between the wall and the artwork as you probably already knew: 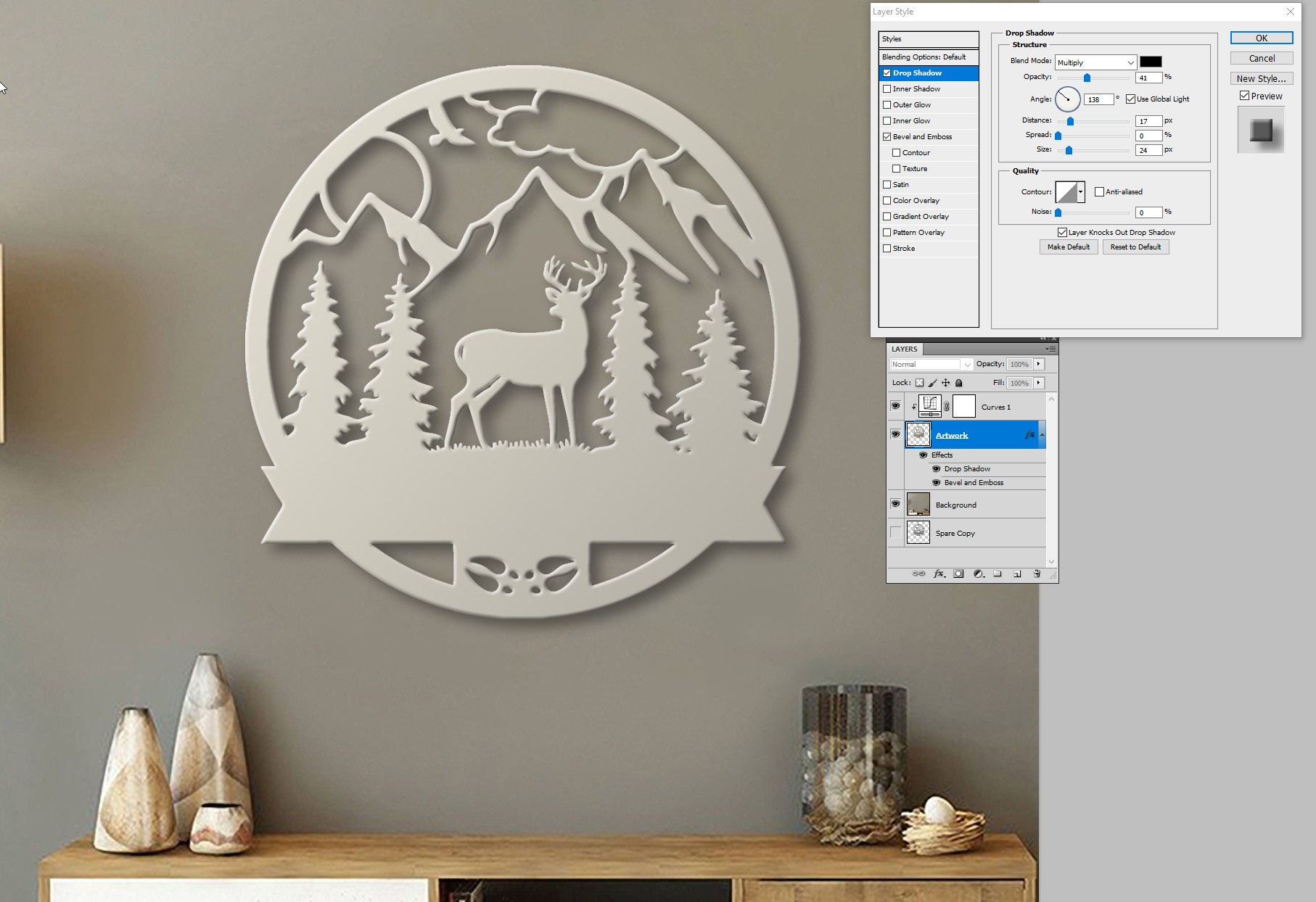 You have in the left a weak lamp which seemingly is strong enough to colorize the wall in the shadow near the lamp. The same redness doesn't exist in other shadows. Thus I didn't insert it to my effects. If the same redness were in all shadows it should be used also in the effects. I would remove the the whole lamp or at least edit the shadow to the same color as other shadows. 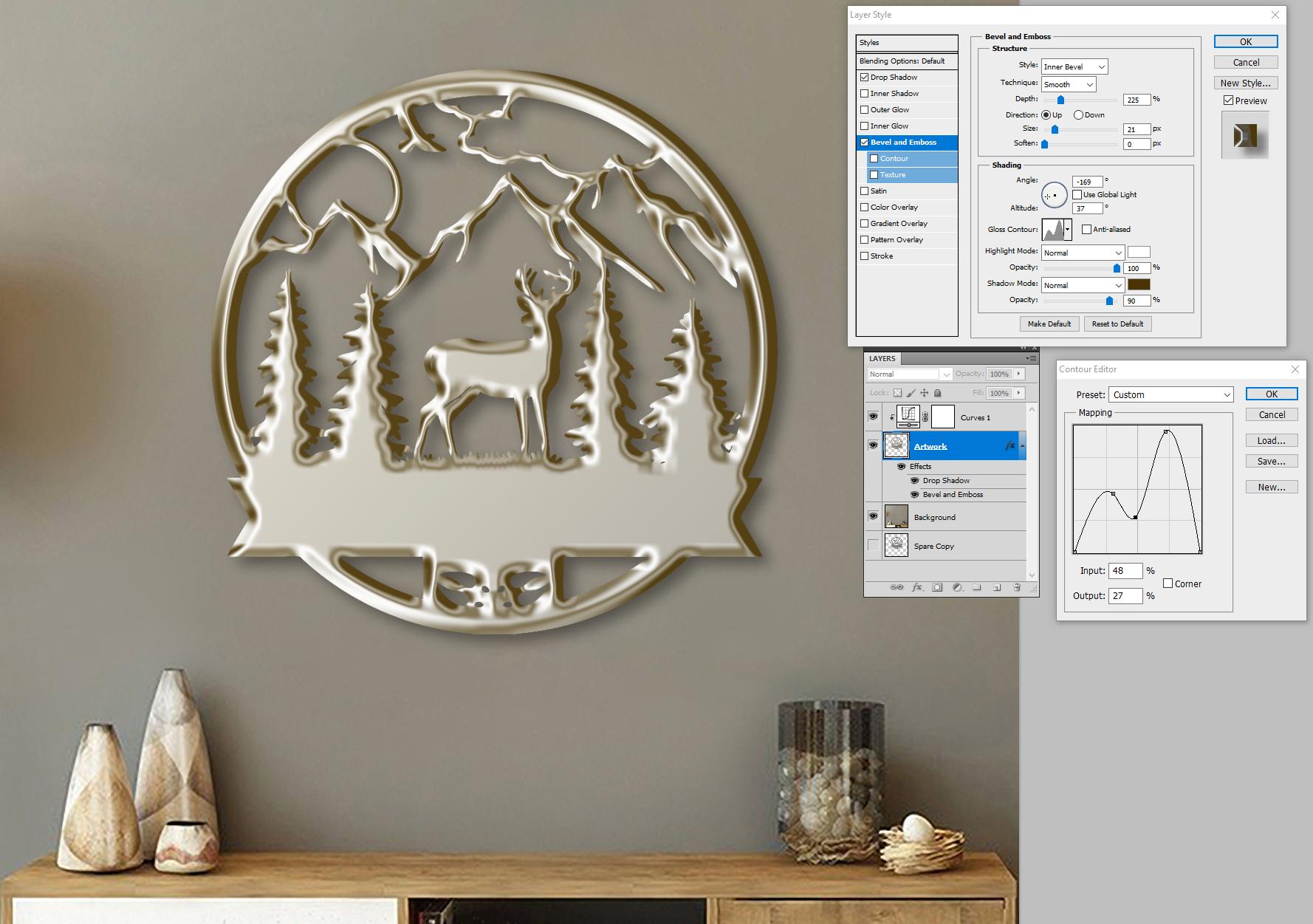 The blending modes are changed to Normal for better control. Pure black isn't good on your brownish background photo, so I changed the shadow color in the Bevel&Emboss dialog to dark brown. The beveling curve is changed to contain a partial grayscale inversion (=the common metallization trick, can be used also with curves in a BW image)

As another example a partially transparent flat version is added to reduce the excessive effect of weird settings. Its moved a little to 4 o'clock: 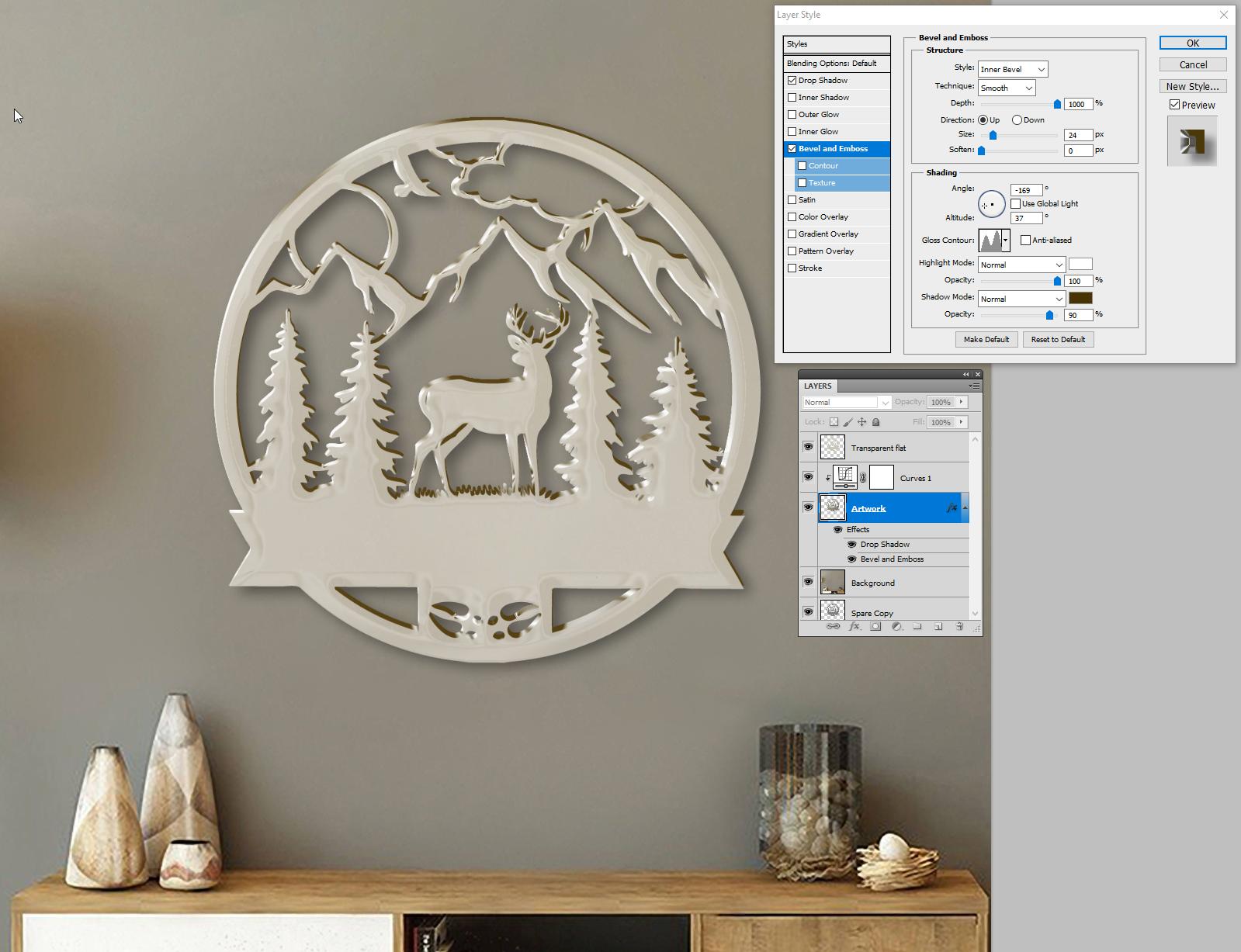 NOTE1: As well you could keep the original fill color and insert the gradient as a layer style. Layer style Gradient Overlay is as good as gradient fill color if you set the blending mode to normal in Layer Style editing dialog. Even the brightening adjustment layer (=curves) could be omitted if you inserted a grey color overlay layer style with blending mode Add.

NOTE2: If one looks for ex. this ad https://www.oregometal.com/aluminium-color-anodizing/ your original blue version starts to look possible. If it happens that you plan to give an electrochemical treatment to your artwork for a certain surface look (=color, shiny graininess) you should have a piece of the treated material. Shoot a photo of it with the real background and light and pick the colors for your mockup from it.

Just for testing I made a version where the background image white balance is corrected, the saturation is lifted up and the artwork has a weird bevel&emboss with colors borrowed from the mentioned anodized aluminium advertisement. 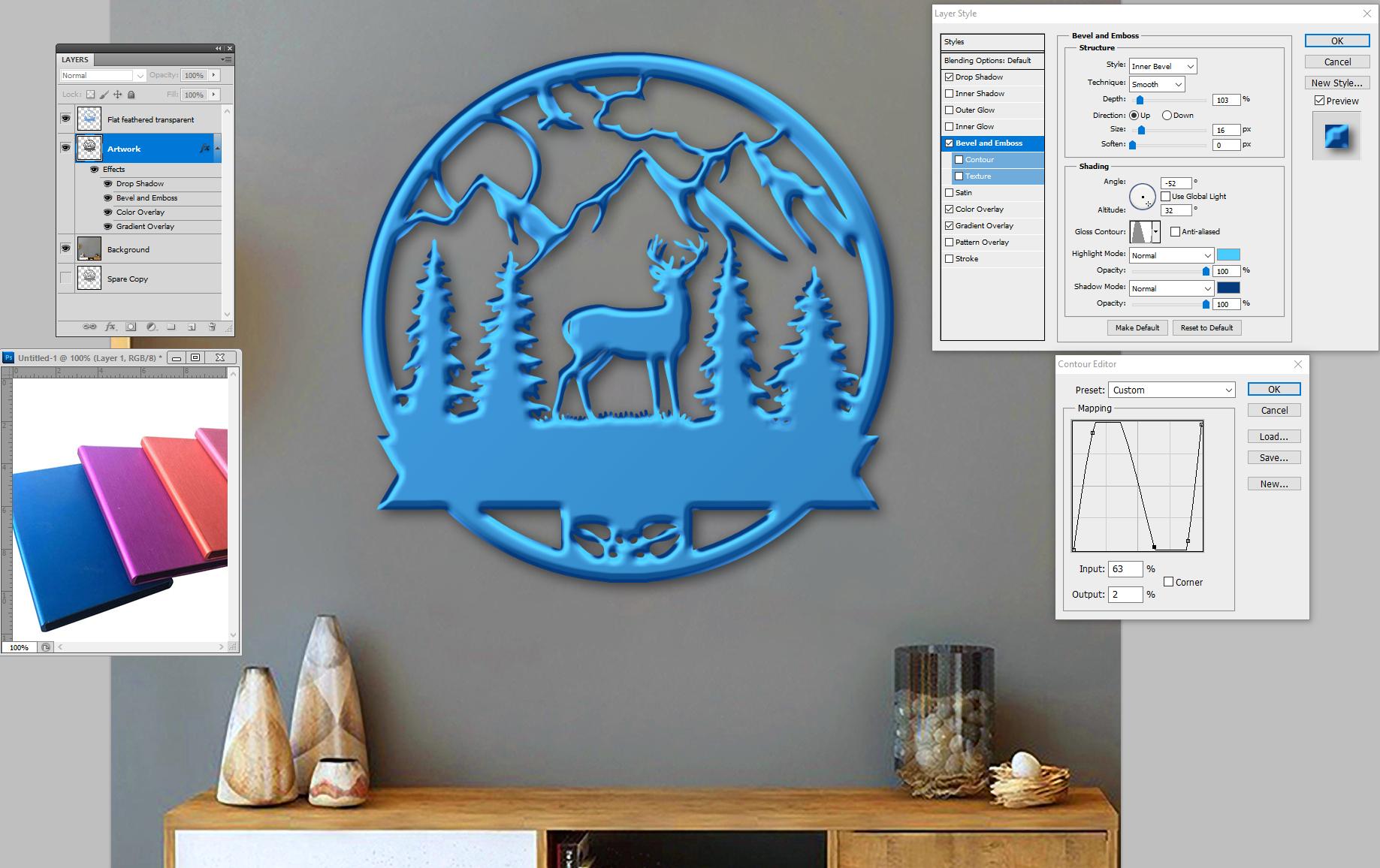 Now it has a realistic blue color, but I'm afraid I have dropped out the good taste in some phase.

Your gradient looks weird with the dark blue in the middle – like there are 2 light sources. Print on aluminium would probably not turn out that saturated especially in a light situation like this where the sign reflects a lot. Yours looks more like coloured plastic with some weird shine varnish. I guess you tried to simulate that the sign is mounted with a 1-2cm gap to the wall – this is much harder to do realistically – it may be better to have it straight on the wall. 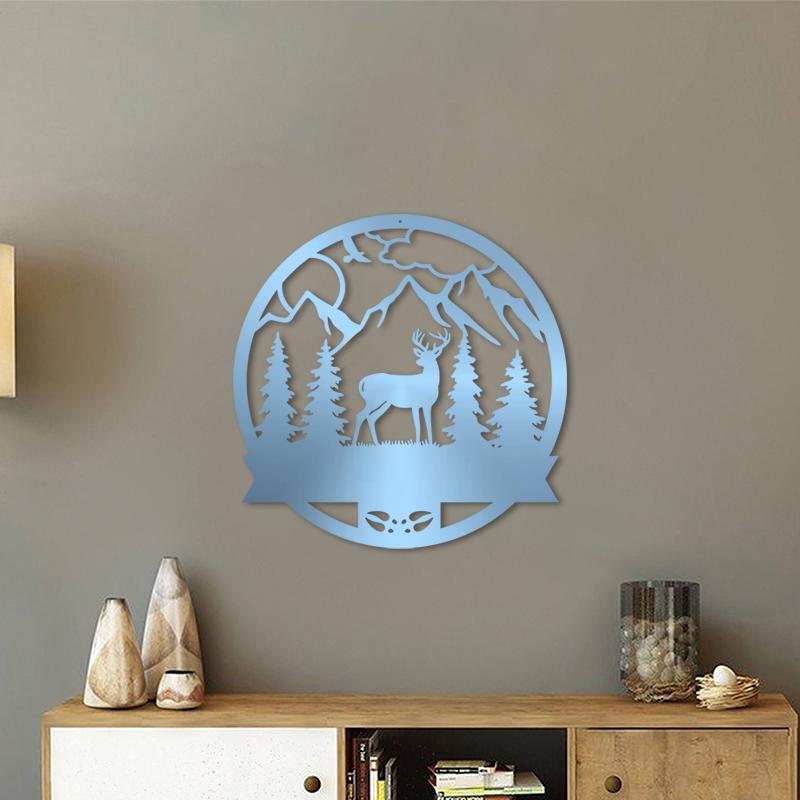 *Edit:
I used an alu texture for the reflection and as an almost not noticeable texture of the metal. Then overlaying a flat colour over it (normal with opacity or multiply blending mode). The reflection would lighten and de-saturate it, so to imitate this by turn the opacity of the colour layer down till it looks right. For the shadow make sure the distance is almost set to zero px, as otherwise it will look like there is a gap to the wall. The closer an object is to the wall the sharper the shadow – so not much blur on that. Also you could sample the shadow colour from the pot instead of multiplying black. 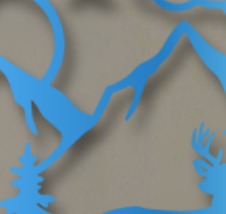 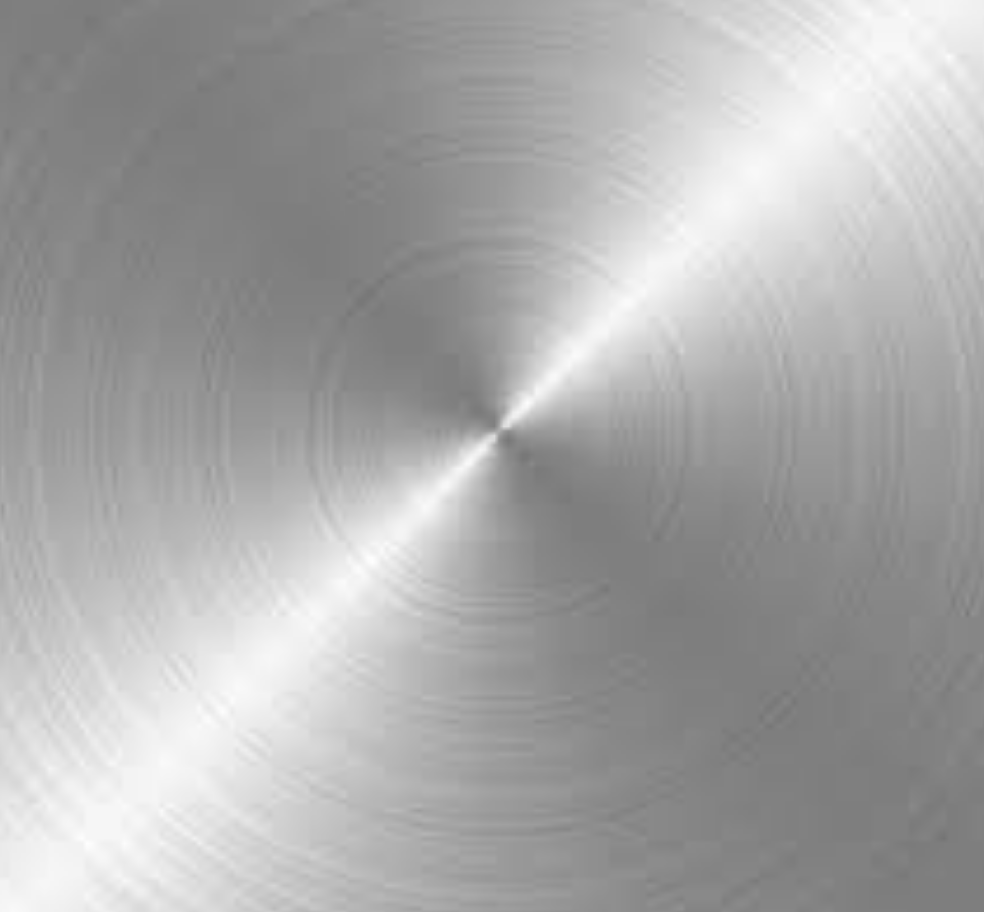 The core answer is more or less what Julian Steinmann said.

I also rotated the brush pattern so it looks more casual.

I made the plate is smaller, so it is not as prominent, therefore it looks integrated into the scene.

And the natural gray tones of brushed metal are in tone with the colors of the image. 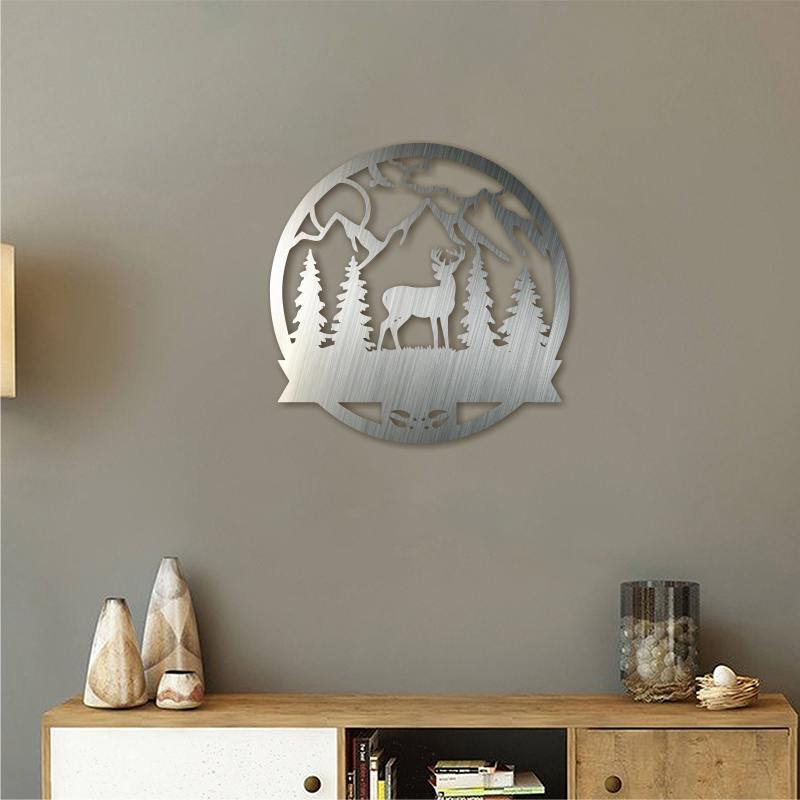 But the best tool to merge the image is the shadow, so I am using a bigger shadow on this second image. 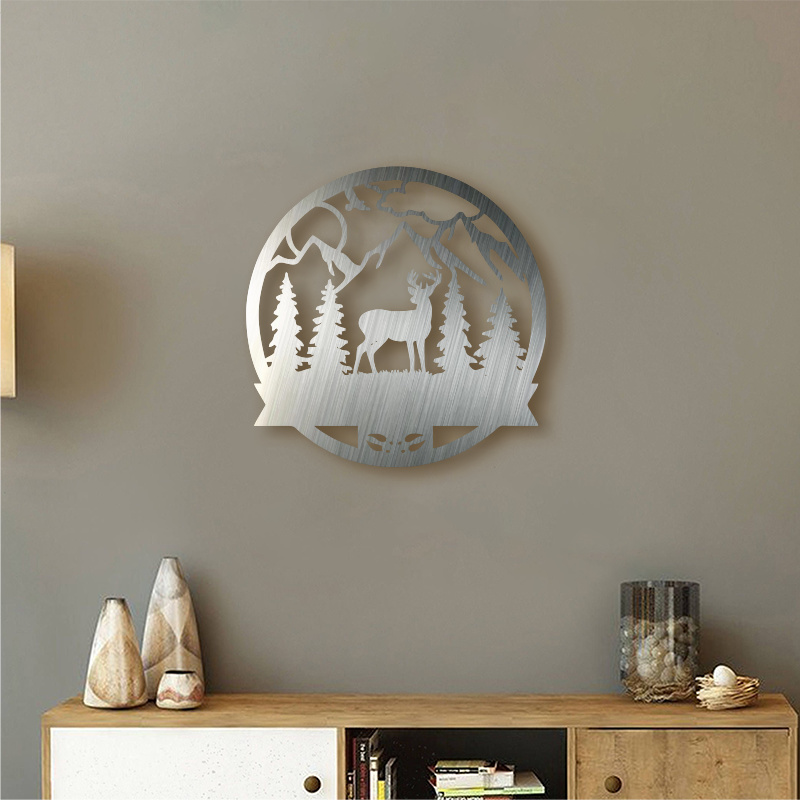 In fact, there are two tones of the shadow. So I used two shadows with different colors, transparency, and softness. 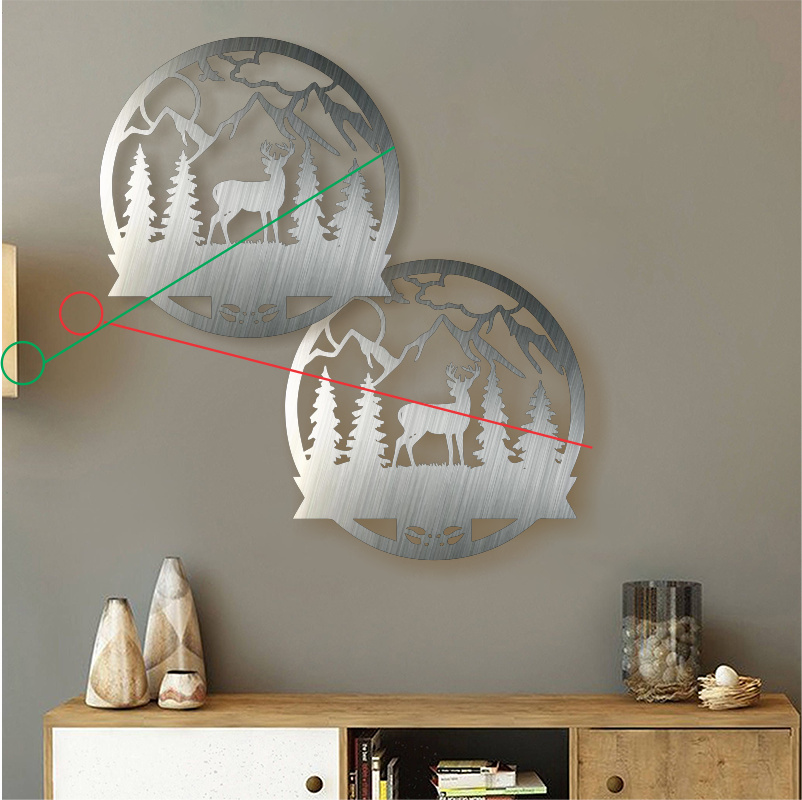 If you still want the plate to be blue, make it a dull blue. This is the same dark blue you used but at 50% transparency using multiply mode. The brushed texture shows, but the muted tones of the image are more natural. 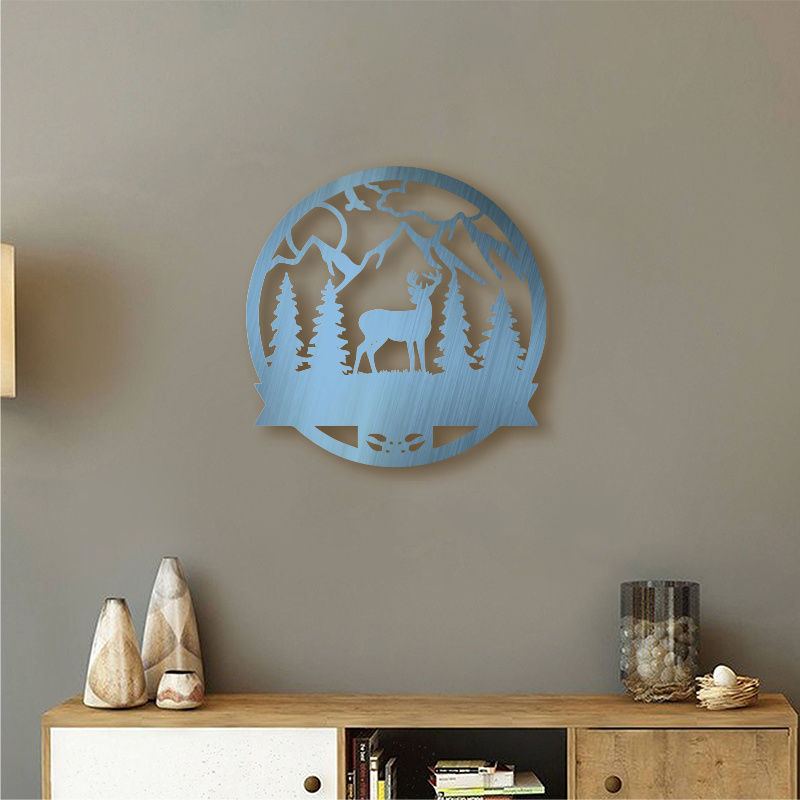 Probably play with the highlights 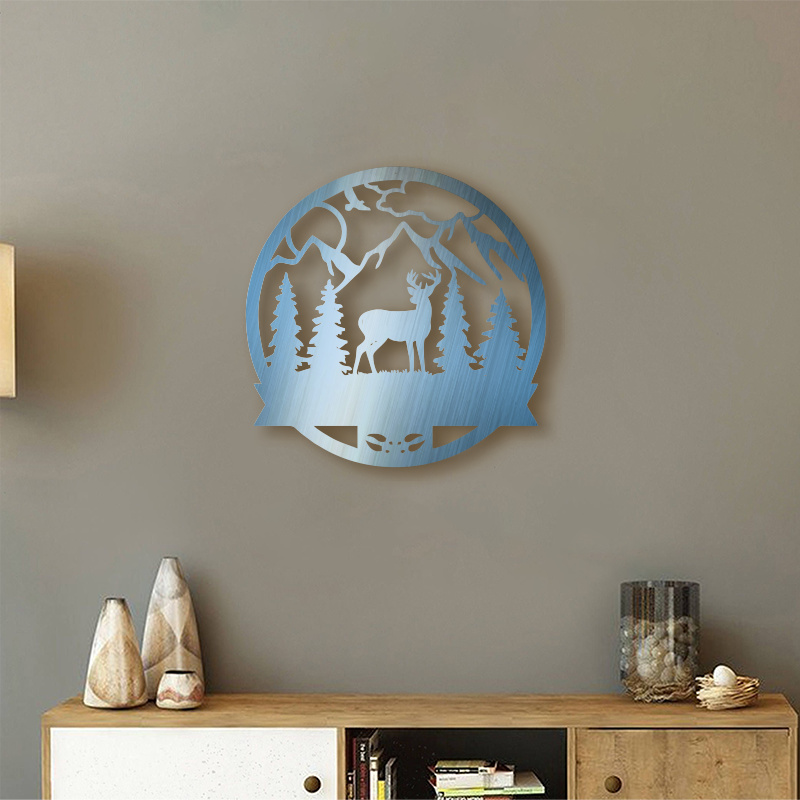 Let me spam you with another post so you can see how you can play with textures, masks, blending modes to make more elaborated looks: Overlay to make image look dusty with fragmented text

Not the answer you're looking for? Browse other questions tagged adobe-photoshop mockup composition or ask your own question.