Thanks all for your insights and suggestions. I've taken on board a few thing and removed a couple of other stuff. Giving more attention to the name of the company and making that stand out more than the bubbles.

This is what's come from it. 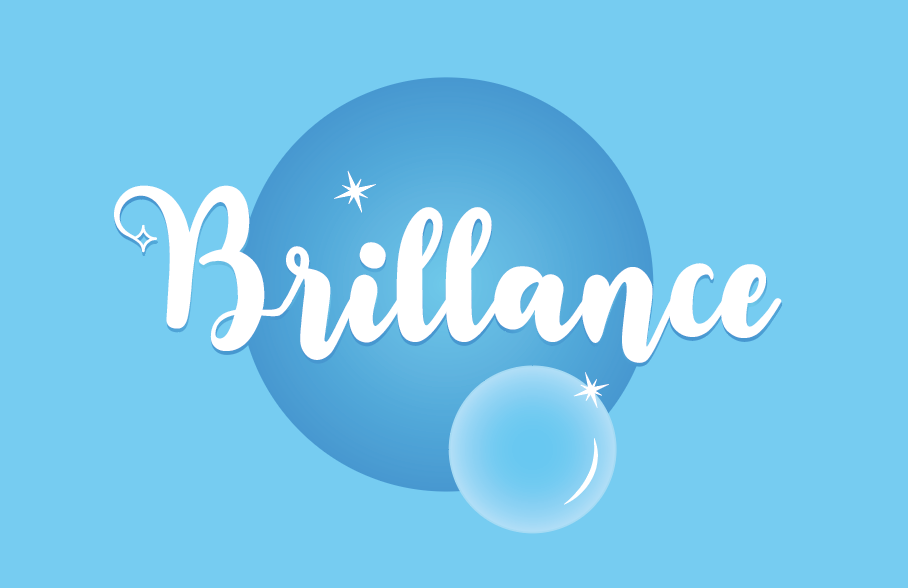 Update: I've made some changes after the feedback given. Doing my best to take everything on board.The logo still feels a bit off, although I feel it's heading towards a better direction now? It's true that experience is the best teacher. Here are the changes, what do you think: 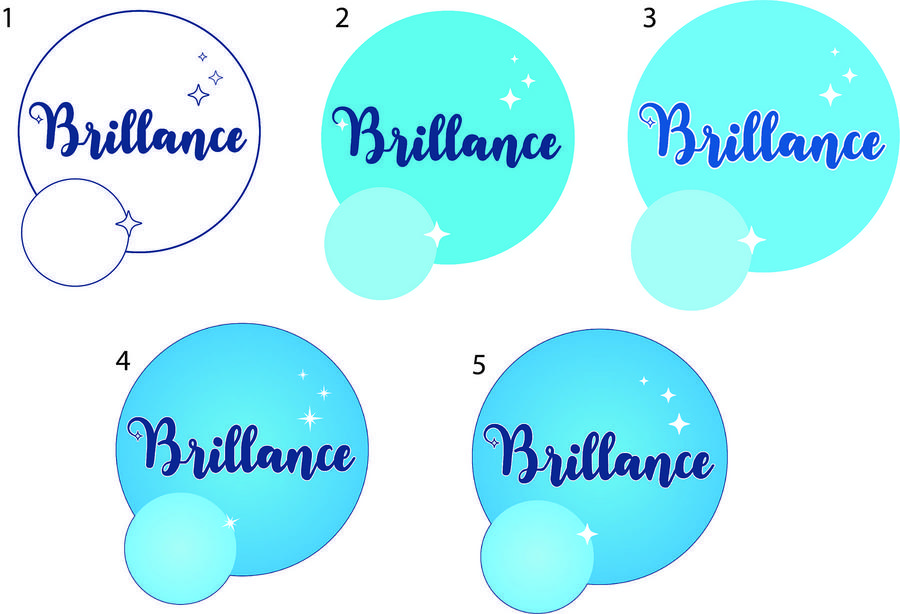 I am designing a logo for a Professional Cleaning and Organising Services start up company. The client wants something clean, sparkly and shiny so to speak. I'm finding it very hard to finalise the logo and just feel I haven't nailed it at all and I'm miles off. I want something that represents what they want but also simple. I've managed to do a few but really looking for some guidance! Please if anyone can give me some feedback and suggestions on how to finish this project, I'd be so grateful. 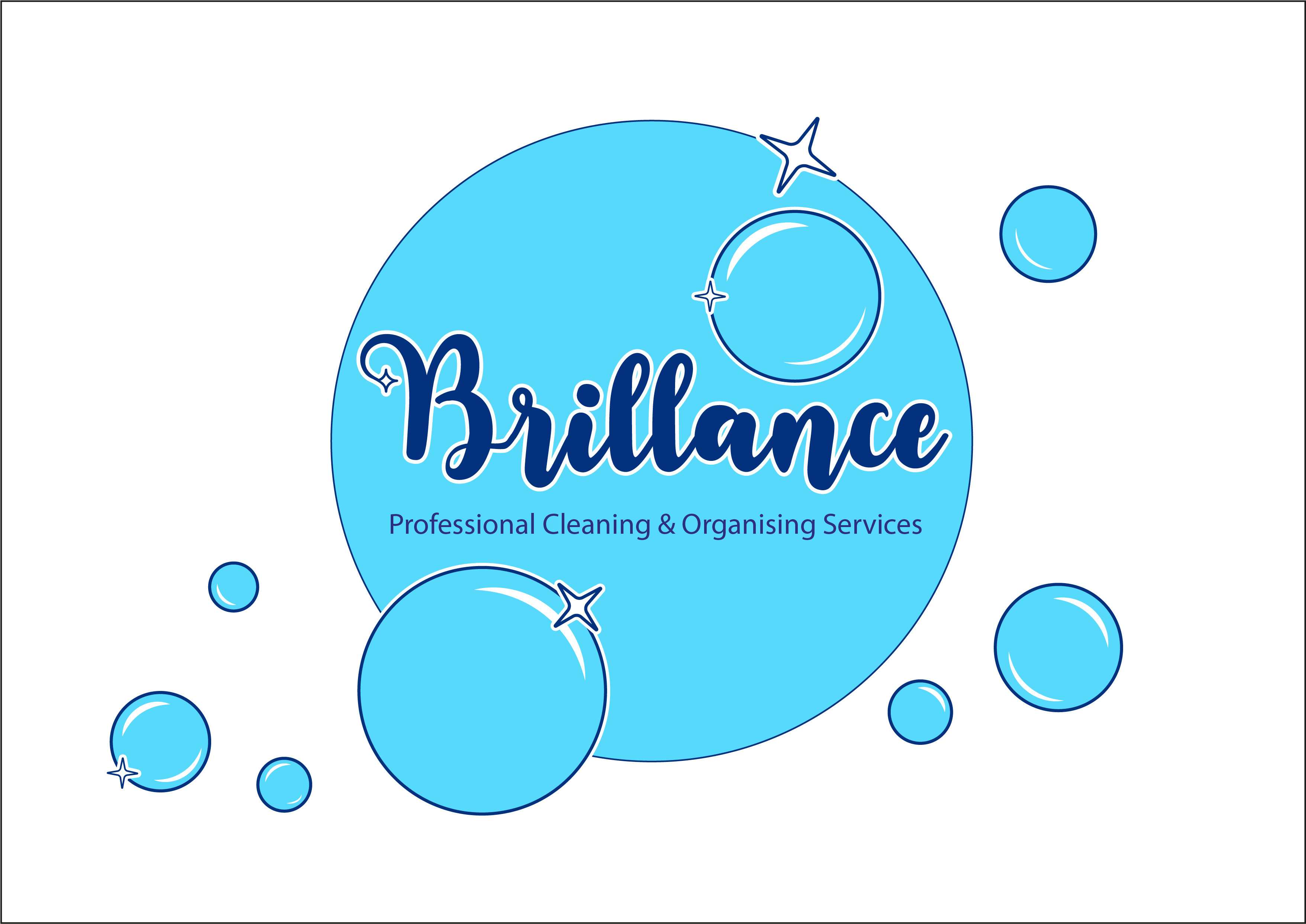 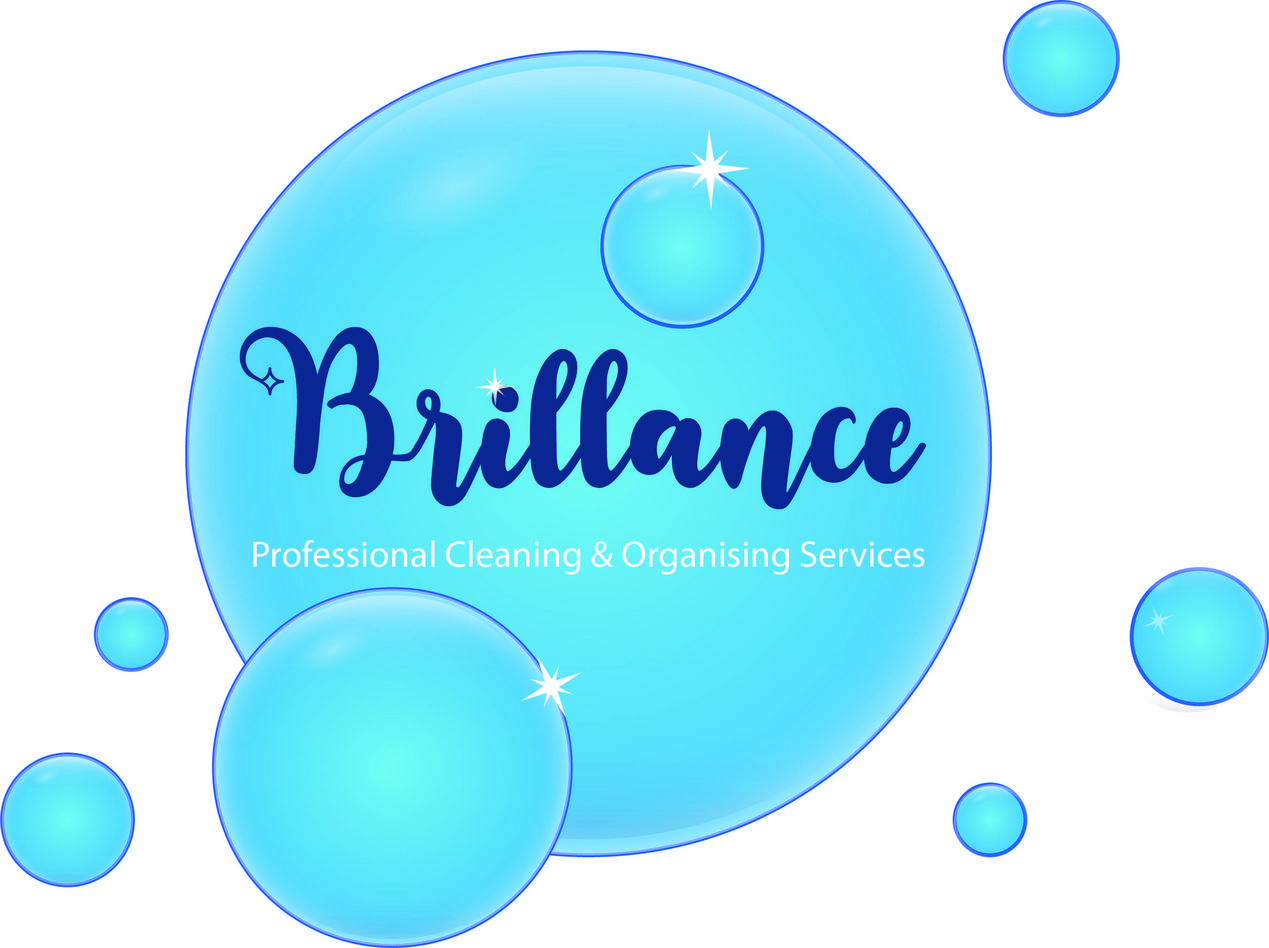 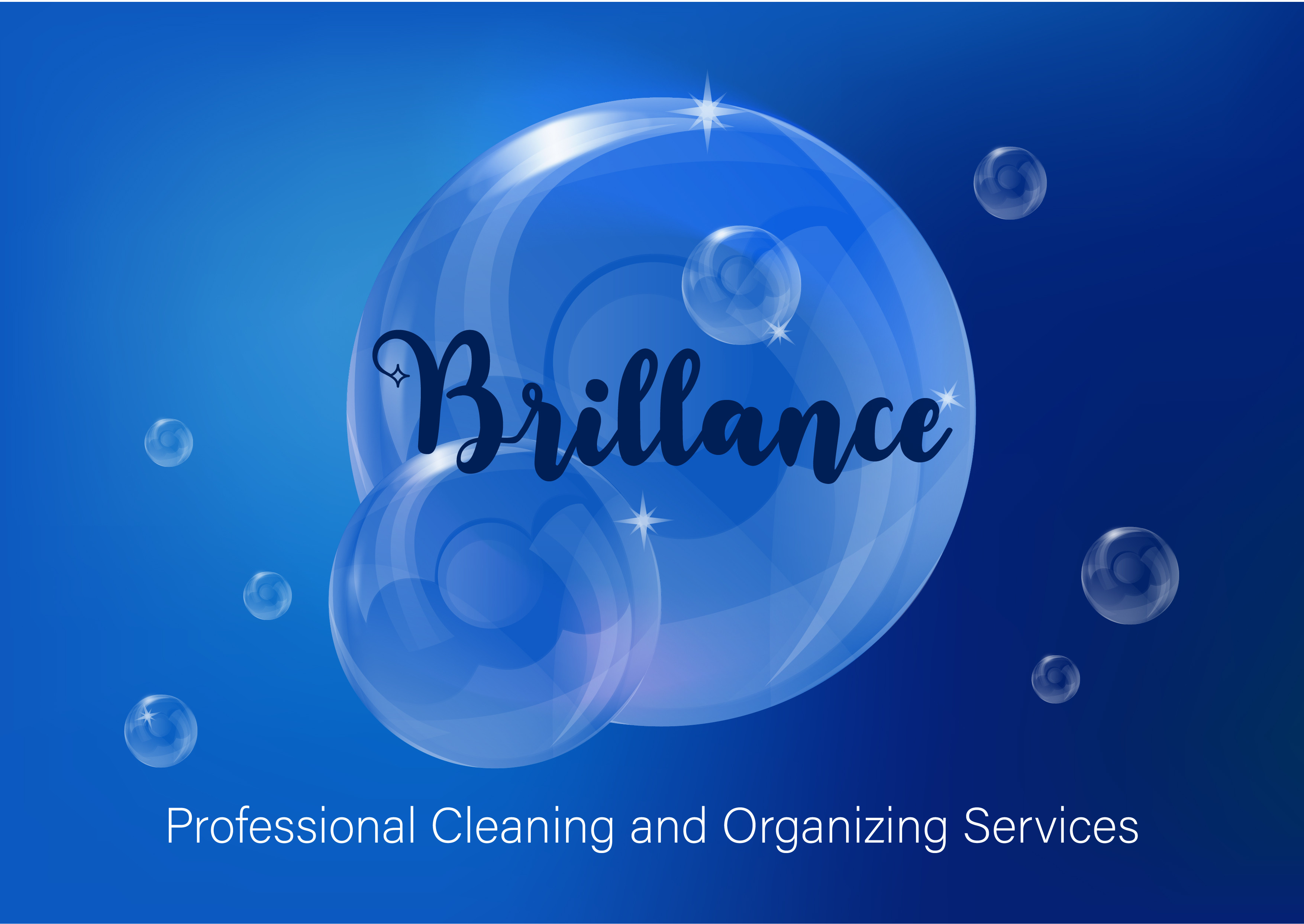 I don't think color is your friend here. Not yet anyway. I think color may be distracting from the forms.

I prefer to focus on the form first and deal with color later. If I focus on both color and form simultaneously, more often than not, the mark will suffer in one aspect. It's very easy to rebalance bad forms by using colors to correct any from imbalance. By avoiding colors, and focusing only on forms, it forces me to balance the forms first.

Since all logos will ultimately need to be reproduced in one color, I want strong forms in a one color design. Ignoring color until I get forms solid is always beneficial for me in this respect.

If you view the basic forms without color.... is it appealing and strong?
(Quick trace of the font Inkston Brush since I don't own that specific typeface) 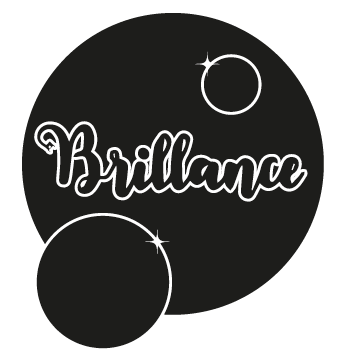 I don't know. It seems the focus is far more on the large circle than anything else. And when it's reduced....

The type simply gets lost completely. Not good.

In terms of eye movement.. what you've current got pushes hard to the right... English, and I assume French, are read left to right, so a right direction becomes inherent and the best marks/logos work to incorporate that movement and to try and push the eye back to the left.

If you merely look at how reversing the position of the smaller circles alters eye movement, there may be some improvement there.... 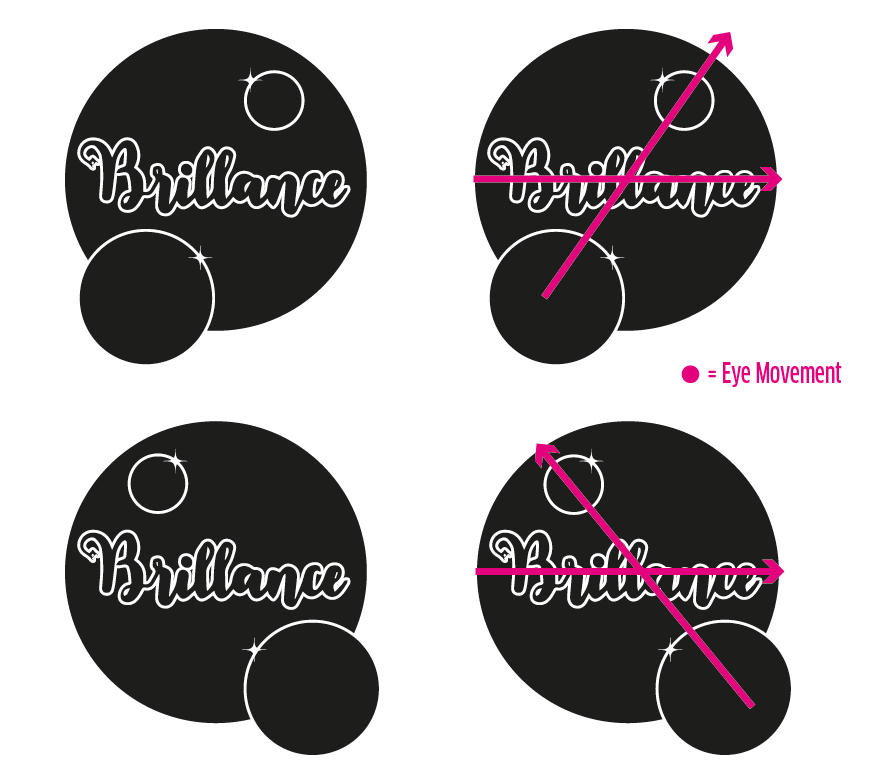 (Again, type is merely traced here. It's not great.)

Using the dot of the i as a bubble is, by no means, an "Earth-shattering", innovative, idea. You may be able to do something far more creative if you start thinking of not using big circles. :) this was a 10 minute rework to show possibilities, not to create an actual mark for use.

The swash along the bottom is not random. It's specifically used to push the eye back to the left. With this, although the art was done really fast and is unrefined, it creates a "circle" movement for the eye... read the word, the swash pulls the eye to the left, the bubbles pull the eye up.. read the word.. repeat.

(Just a personal demand I place on myself... never create a logo with a font so basic that anyone can merely install the font and pick it from a font menu to duplicate the logo. Always do something more to any type in a logo. This is why I've manually added highlights to the type above. They could be done with a great deal more care and precision, but you get the idea. The little star on the tail of the B is a nice touch and along these lines. It could be pushed a bit more though. -- Again, that's merely a personal demand I place upon myself I'm not stating you must or should do any such thing. )

Nice work! I love the white line from #1, makes the word "Brilliance" pop off the background a bit better. I would add that to the other designs. I prefer the bubble from #2 best, with #3 also really nice. But #3 probably needs a lighter background so the bubble pops out from it more: you want the company name to really jump out at the viewer. With all of these I would look to deliver a monochrome/small size logo that prints well on black and white or at small sizes. Maybe switch the font at the bottom of #3 to a thicker weight if you went with that one for this.

The original idea of bubbles was fine. The original 1st version was simple enough, the original 2nd and 3rd versions are too complex for this purpose, no matter how fine drawings they are.

The problem in the original 1st version is the visibility of the business name. It should be the biggest item. The additional slogan can be smaller, but the business name should conduct the perception. An example: 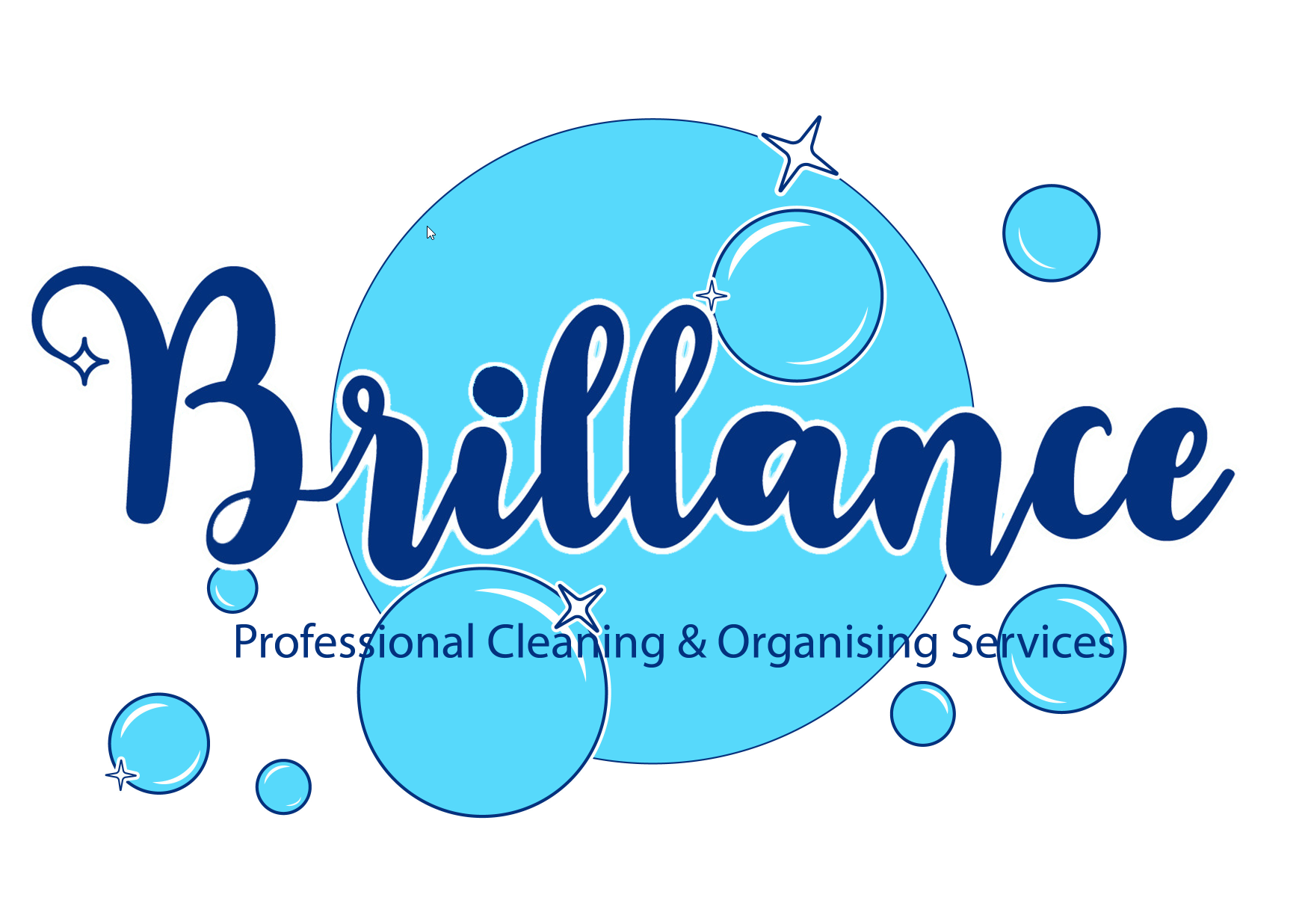 I am not a pro just giving my opinion,to me at the first glance, it looks like a car wash logo. also if they try to embroider logos with outline , it will be nightmare to keep the two colors register. Imagine everything needs to fit in 3.5"-4" wide area and still be legible.

1
Critique: Improving logo so that it is more conservative/professional?
4
Critique Request: CAD drafting contractor logo
8
Methods for designing identity systems beyond the logo
8
Logo design: is this too simple or boring?
3
Need an outside perspective on logo design for outdoor company
0
Critique request: Logo design for a tech company
1
Requesting feedback on Version 2 of beeJACK company logo