Creating a new layer in Illustrator

Command/Ctrl+L is the default shortcut in Illustrator for a new layer.

Edit > Keyboard Shortcuts > Menu Commands > Other Panel And you can change it to match Photoshop's shortcut if you'd like (that's what I do). 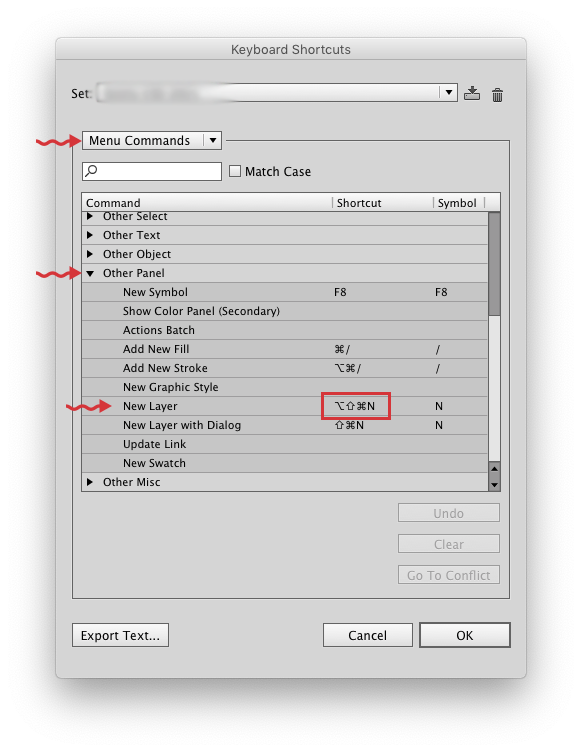 The other way (besides the panel button) to create a new layer is via the Layers Panel Menu. There's no "new layer" item in the main app menu.

Illustrator layers are quite different than Photoshop layers.

In Photoshop, construction is often a mix of layer interactions, and indeed can greatly depend on layer interaction for some appearances. In Illustrator, layers are really more like "master groups" and don't necessarily interact with one another. It's the object stack in Illustrator which has interaction to a greater degree.

Not the answer you're looking for? Browse other questions tagged adobe-illustrator layers shortcuts or ask your own question.

2
Multiple Duplicated Layers in Photoshop like Illustrator
0
Meaning of layer highlight colors in Illustrator
1
Selecting The bottom layer Photoshop (Shortcut)
2
Illustrator CC shortcut: Select next layer in layer palette
1
How can I quickly hide or delete a layer in Illustrator without using the Layer Panel?
1
Flatten visible layers into a new one in Sketch
0
What is the shortcut for duplicating a layer to a new document?
3
Assign Ctrl+Tab as switch images in Gimp?
1
Adobe Illustrator layer target button
0
What does "Uniform Type" mean in Adobe Illustrator (cmd-shift-X)?