My confusion is that how we show the image on the screen with 2D points by perspective projection?

The vanishing point in perspective projection which is 3D coordinates could be represents in projective plane as (x, y, z, 0). Am I correct?

Seemingly there's no flood of answers from competent mathematicians in this site, but here's one from the rest of us.

At first about presenting a perspective image with 2D coordinates.

To be fully defined a plane in Euclidean 3D space needs 3 points which are not in the same line: 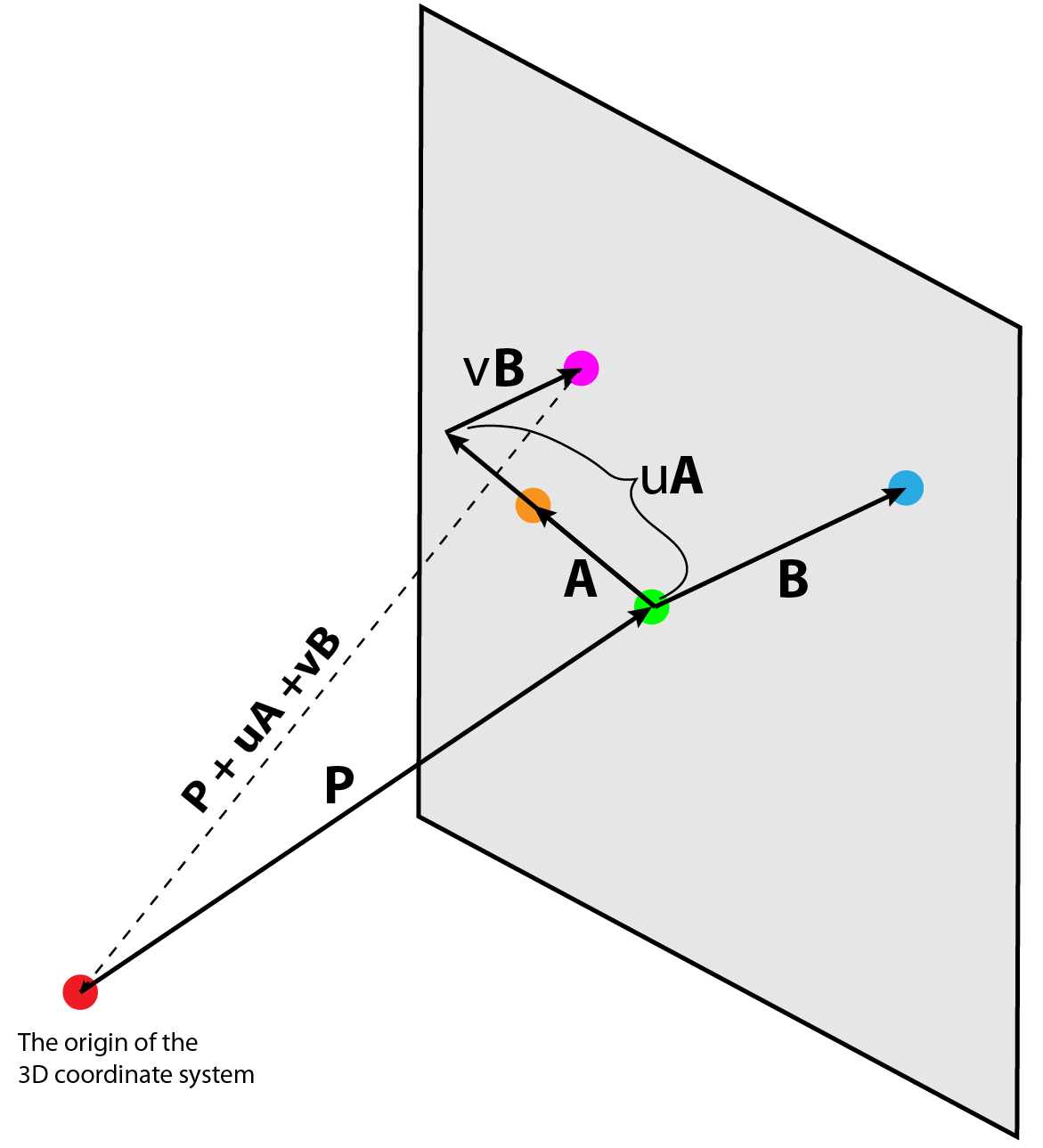 I have here a grey polygon which is a part my plane which is defined by my green, orange and blue point.

The green one is my plane base point. Vector P points to it from my origin.

For an arbitary point (purple) in my plane there exist always such numbers u and v that vector P + uA + vB points from the origin to the arbitary point.

When u and v vary through all real number value combinations the end tip of P + uA + vB walks through every point of my plane. Thus u and v can be considered as the internal coordinates of my plane.

Every plane have an infinite number of three point sets (green, orange, blue) which define the same plane. For practical simplicity we often have perpendicular A and B which are both one unit long.

In even simpler cases we use in whole 3D space a coordinate system where A has the same direction as the X-axis and B has the same direction as the Y axis. But that's not a must. You should see that every point in a plane is possible to tell with 2 internal plane coordinate numbers (u and v) if the base point and the orientation points are known or equivalently vectors P, A and B are known.

Perspective images of 3D objects are drawn by the projector lines to the imaging plane. The image is a part of a plane, so every image point must be possible to present with 2 internal coordinate numbers of the known (=vectors P, A and B are also known) plane.

In your recent linked book example we can simply drop out the non-changing Zvp which was assumed to be a constant and defined from the start. The rest remaining coordinates Xp and Yp of the image point on the imaging plane have the role of my u and v.

Reduction from perspective projection to parallel one: That does not happen by setting Zvp=0 because the observer or actually the projection center in computer graphics talk doesn't move to infinity - its place doesn't depend on the place of the imaging plane (or actually the view plane in your talk)

My knowledge of projective coordinate systems for extended 3D space is too thin for proper answering to the (x,y,z,0) -question.

Not the answer you're looking for? Browse other questions tagged 3d transform axonometric-projection or ask your own question.

3
Do 3d Programs calculate perspective?
2
How to create Anamorphic, Optical Illusion, 3D Large format print?
1
Custom Isometric/Parallel Projection Grids
8
What type of graphical projection is this?
0
How to draw an ellipse inside a 30 degree projection?
1
Why can ellipses be used to find squares in perspective drawing?
0
How vanishing point and centre of projection both are same?