How do I acheive this monochrom type of lighting in photoshop?

I found this Image on an obscure YouTube channel and since then I've had a hard time trying to recreate this effect . I would like it to know what's the key to achieve that lighting using photoshop , and that grunge lines texture too if possible . thanks alot in advance :) 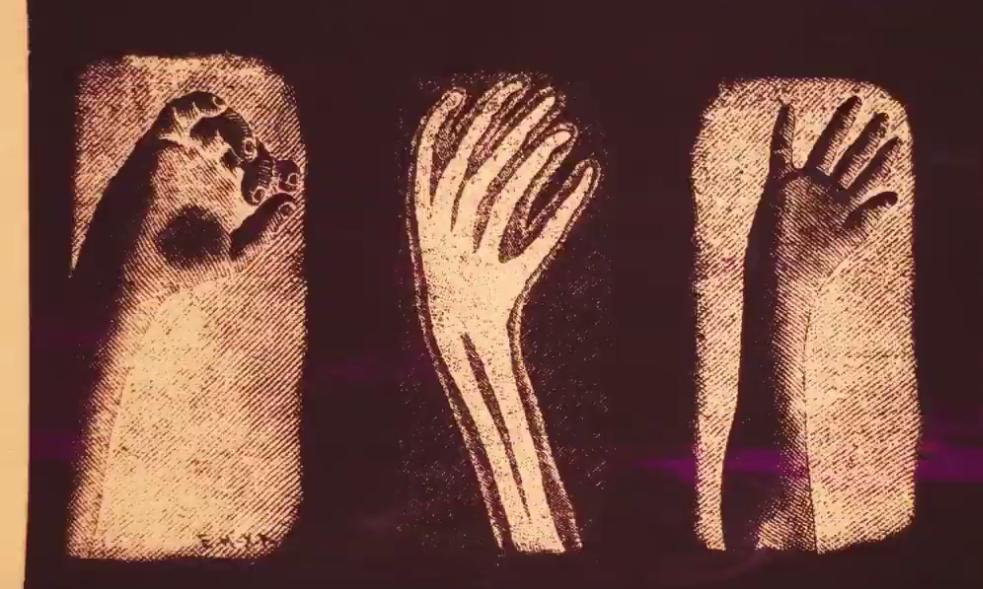 This is more basic experimentation than anything....

It's possible to start with a photo and remove color (desaturate) and boost contrast (levels) then use a number of different filters to achieve the engraving appearance.

This sample uses Flaming Pear's India Ink filter (no affiliation). And uses a few variations for that filter in the hand and for the background (which start as gradients). 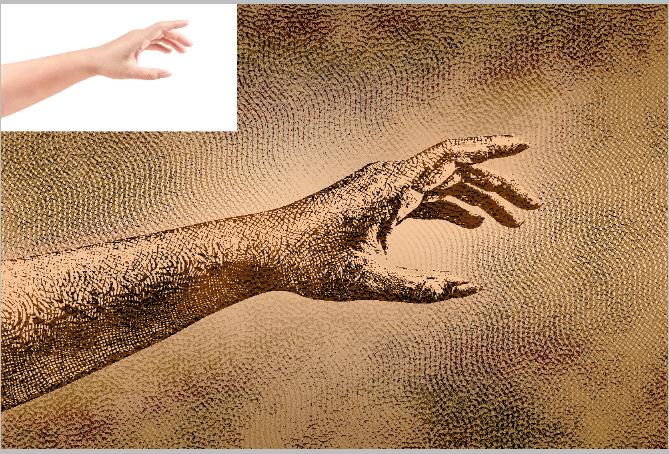 The filter creates the hatching, then it's up to you to manually create more or less contrast where desired.

Then it's just a matter of creating a layer stack to achieve the appearance you want... 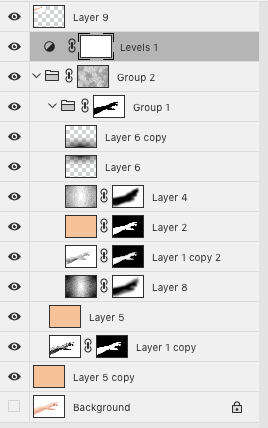 They are manipulated photos, I guess. The version in the middle looks tricky to be made only with effects, without drawing manually the parts which look simplified bones. Versions in the left and in the right use half-toning. There's plenty of noise inserted. To start one needs a photo where the limb is about 1000 px long to get enough resolution. The image must have high contrast and deep shadows. In the left the image of the hand is inverted to get deep shadows to an image which obviously has only bright and midtone areas. Inversion turns bright areas dark and vice versa. Deep shadows could also be drawn manually.

A comment suggests that the images are carved or they are drawings. I do not believe it. A competent engraver or draughtsman would not use straight lines, he would make curves which follow the surface forms like they were on a 3D surface - Its totally different than those curves which are made by fake engraving scripts or filters. The subject is discussed here: Create engraving in GIMP/Inkscape

You want to use Photoshop. You do not need any 3rd party add-on if you accept straight lines. You can get easily something like this; 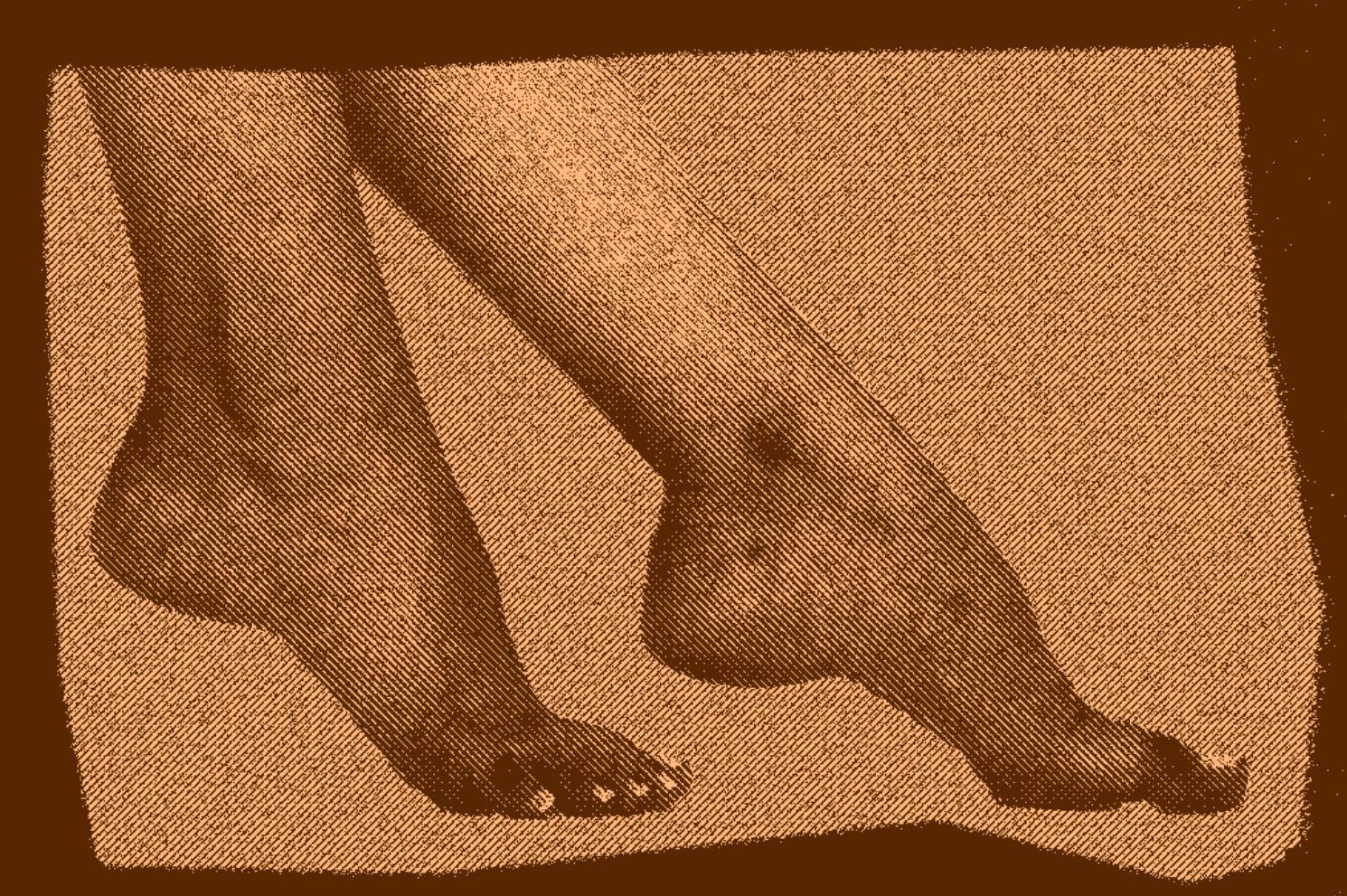 I made it brown because in my low quality screen your examples seem nearly black, no matter they are actually dark red in the darkest places.

I do not have a high contrast image of any limb. I captured one from an advertisement. It's a pedicure shop an I should in theory say where I borrowed it, but I see it's better to stay silent because I had to convert the image to black&white and insert contrast to get some deep enough dark areas without painting them. I guess the pedicure shop doesn't want his name to be shown with this: 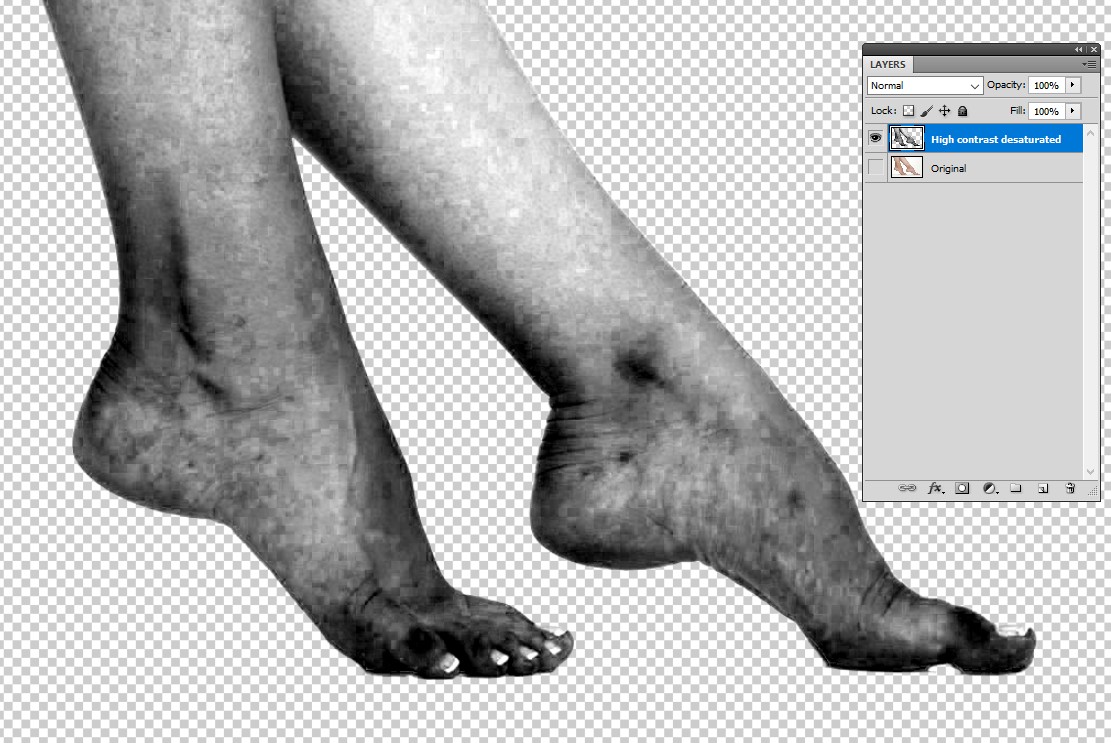 The background is also removed. It was easy before applying Image > Adjustments > Black & white and increasing the contrast with the curves because the original image had clean color borders and low noise. 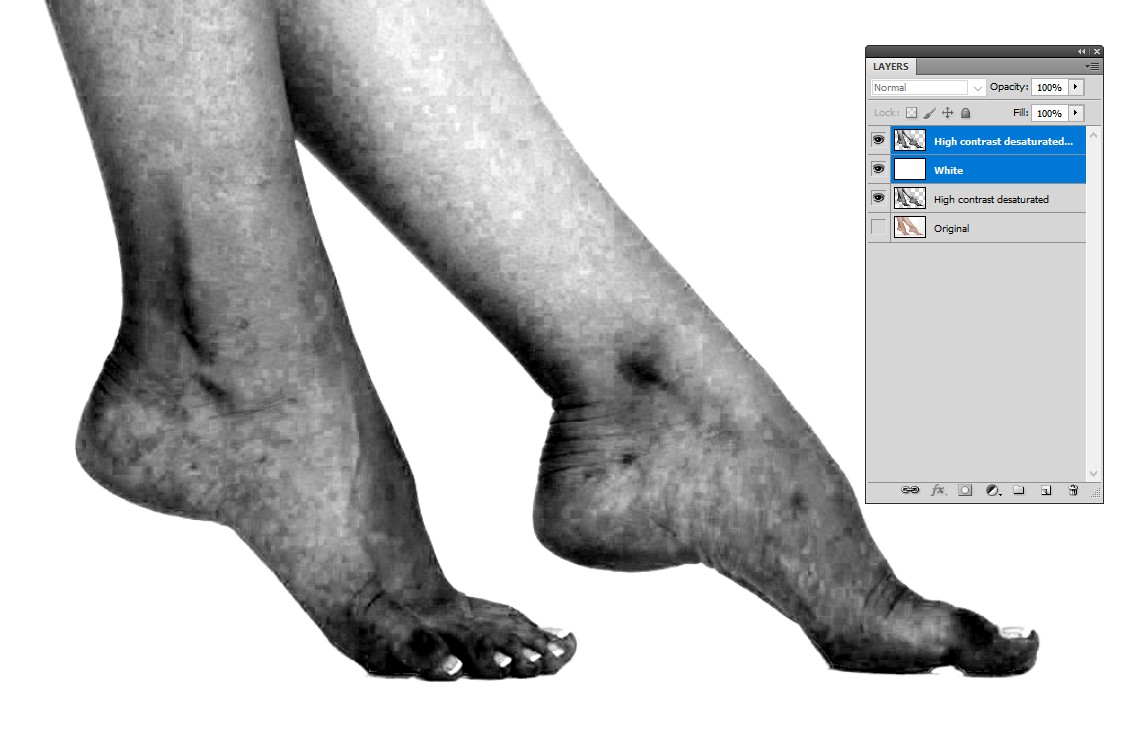 Merge the white layer and the duplicate. You will need later the version with transparent background, so keep that layer!

Open 2 new images with the exactly same pixel dimensions as the limb image. Move (or cut&paste) the limb with white background to one of the new images and fill the other with grey. Convert both new images to grayscale mode (=Image > Mode > Grayscale): 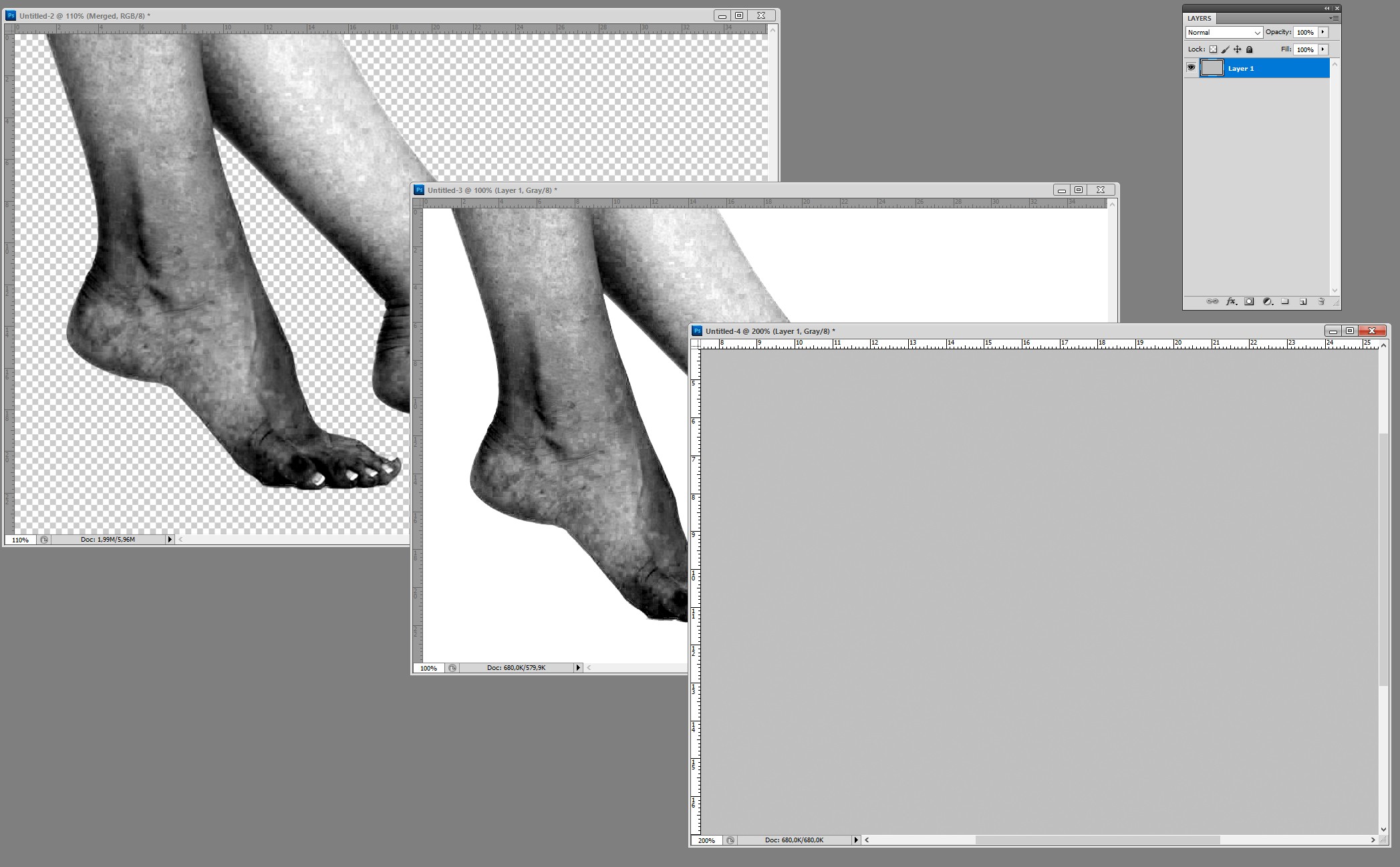 The line densities must be sparse enough to prevent interfering with the screen pixels. Line direction angles should be different for good visibility. My versions have +45 degrees and -45 degrees: 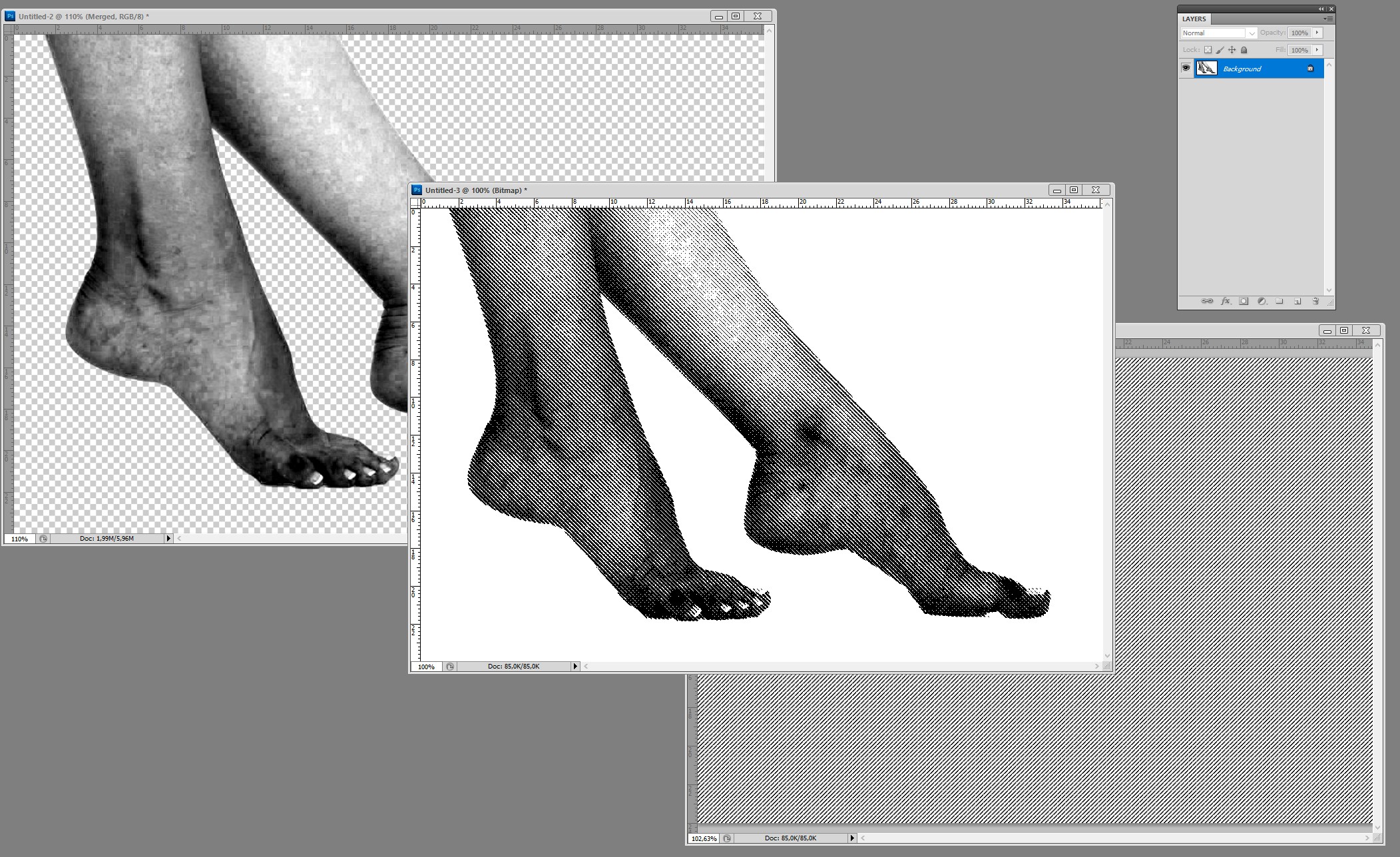 The images with halftone screen contain only full black and full white pixels, but they can be copied and pasted to the original RGB image for colorization. Do it. The bitmap line pattern limb should be the new top layer and the grey one should be just below it. The originals should be in the bottom: 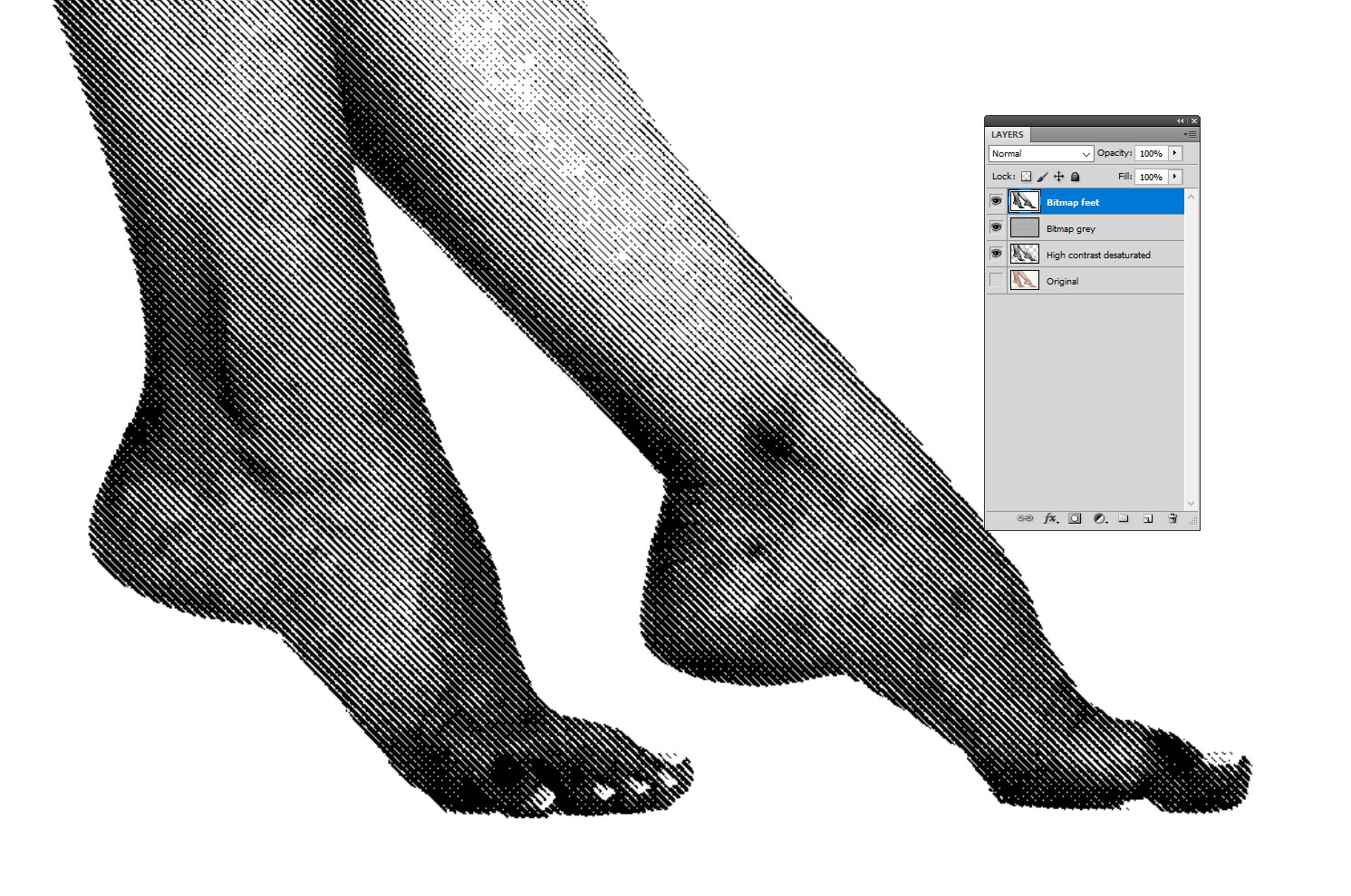 You must remove the white from the top layer around the limb but keep the white in the limb area. Make a selection by holding the Ctrl key and clicking in the layers panel the layer icon of the limb with no backround.

Invert the selection and delete the white in the bitmap limb layer. As well you could simply insert a layer mask just after making the selection. I deleted the white: 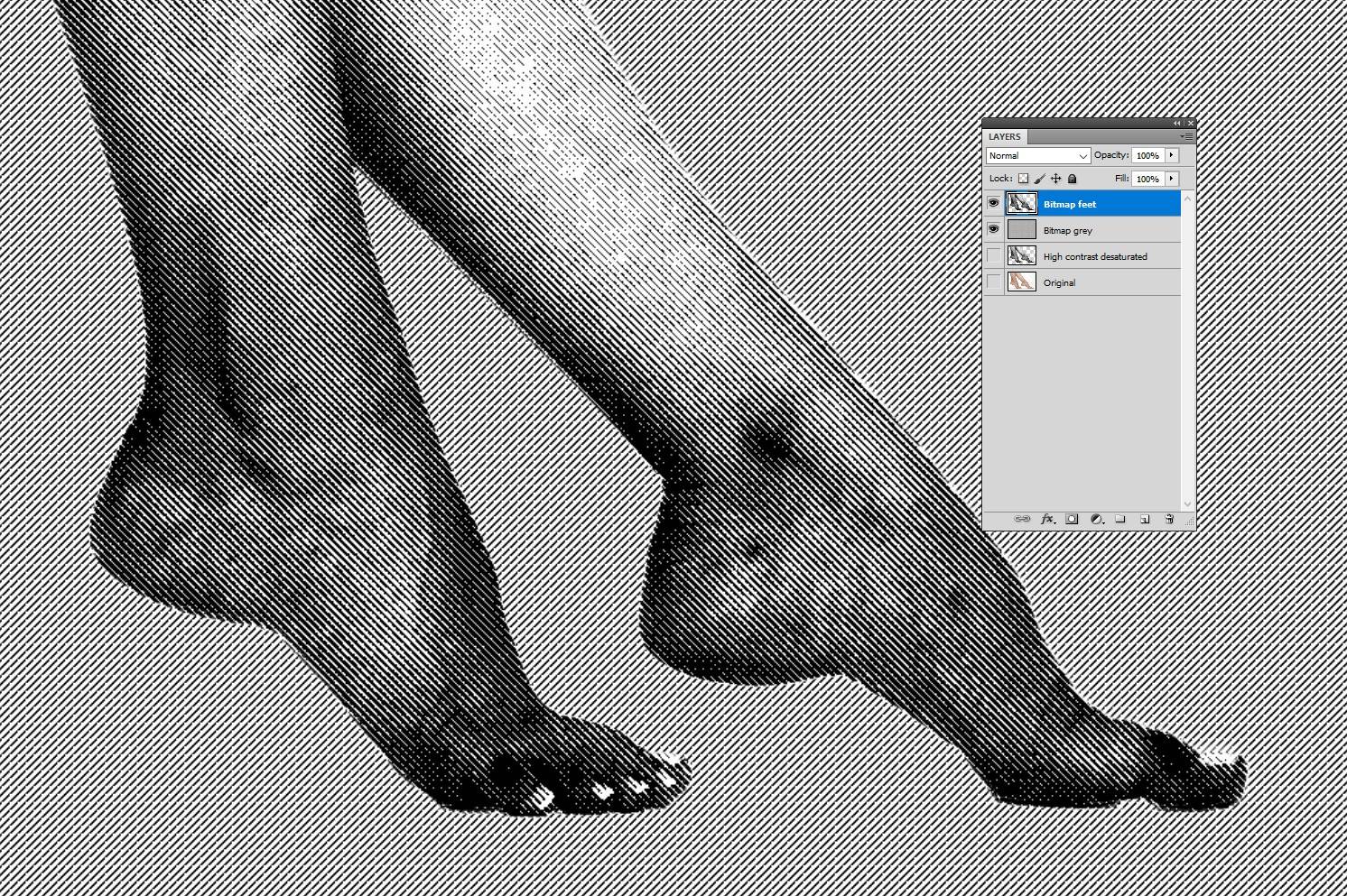 To experiment easily and without losing the line pattern layers due an accident duplicate them, merge the duplicates and add some noise (=Filter > Noise > Add noise > Gaussian monochrome 20%). By applying Image > Adjust > Treshold you can adjust the roughness caused by noise: 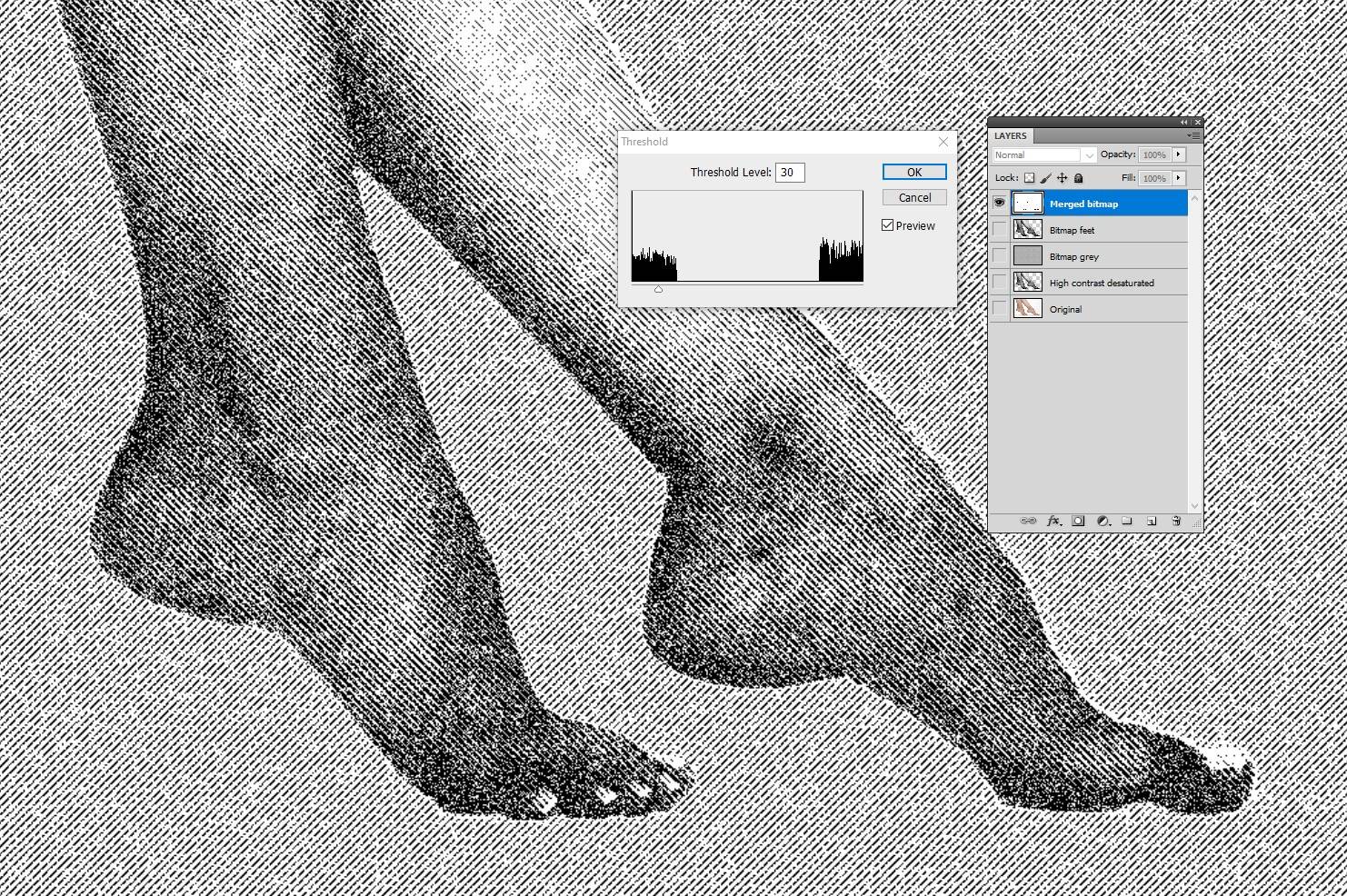 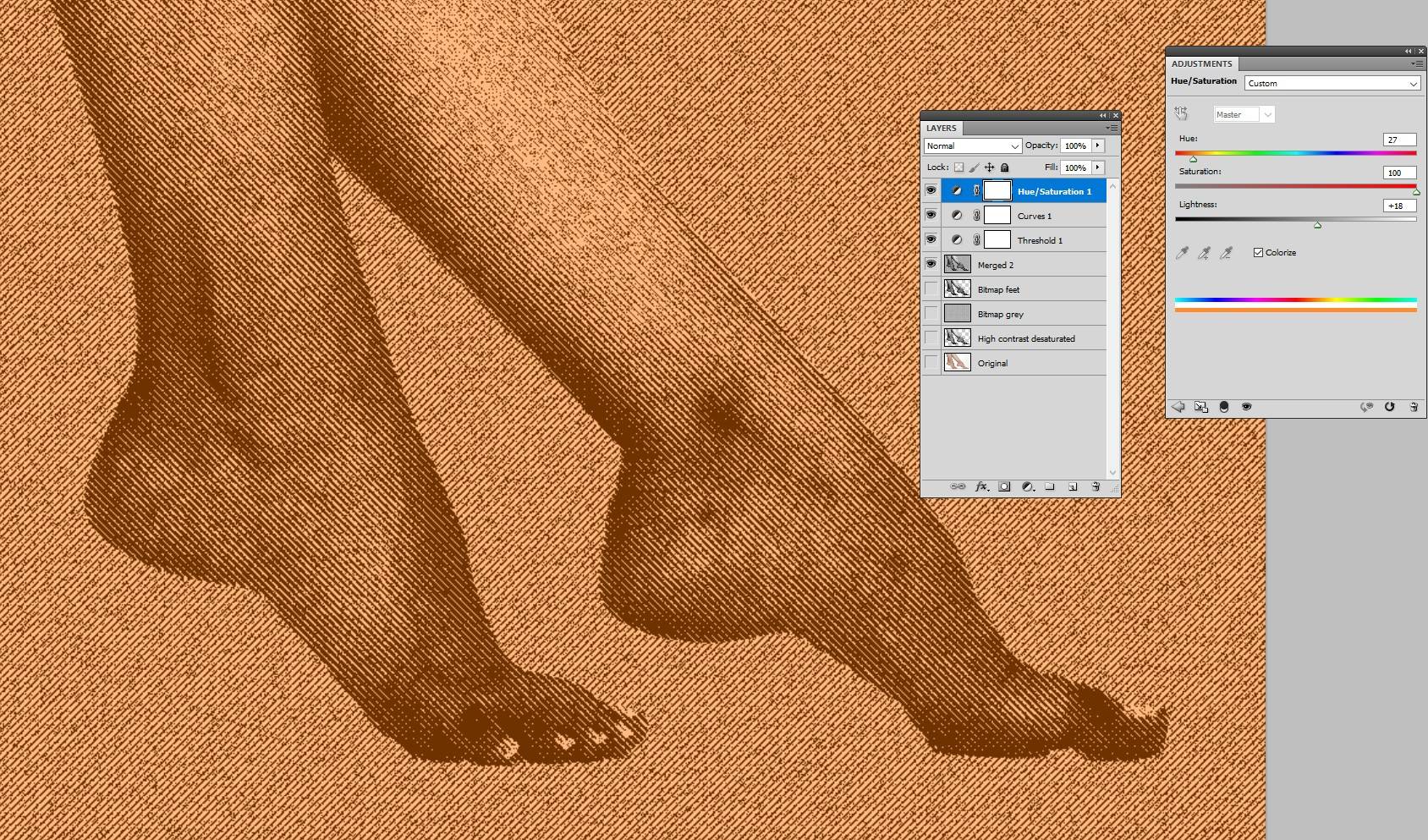 For more complex coloring you can insert a new top layer with blending mode color and fill it with a painted or gradient color fill. The hue&saturation layer is in that case not needed. But the curves layer is a must, because black and white do not take color. I skip it.

Finally I inserted a new layer (=Frame) just above the merged layer. It has blending mode Multiply. It has only black and white. The edge is a black frame and in the middle there's a white area which makes a window when the blending mode is Multiply. The frame layer has got some blur, noise and tresholding to keep it pure B&W but have some roughness: 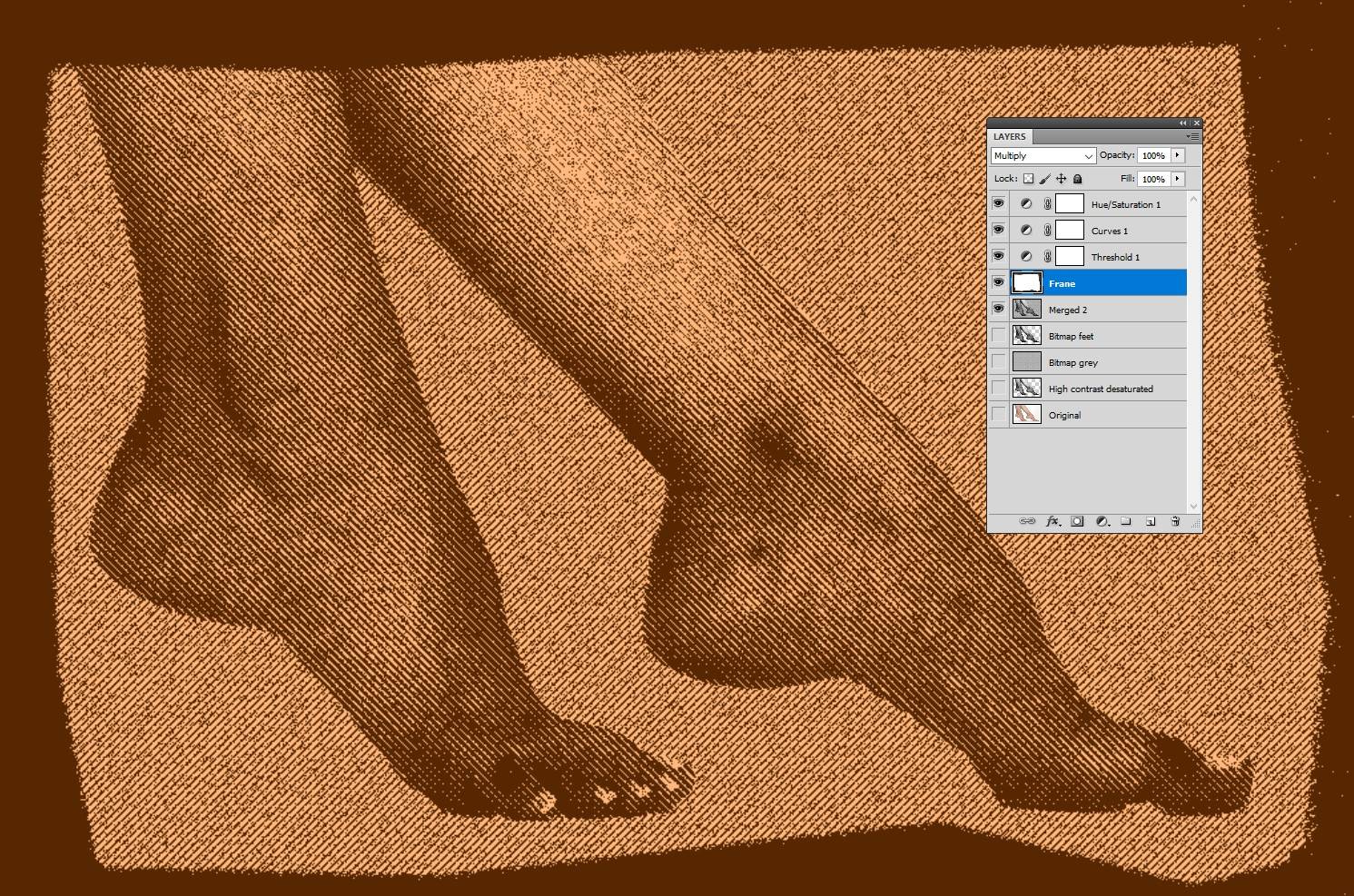 This used destructive effects. Avoiding them and using as much as possible layer styles, adjustment layers and smart filters would be a step towards more pro-like workflow. But that's another subject.

Not the answer you're looking for? Browse other questions tagged adobe-photoshop texture lighting-effects highlights or ask your own question.

0
How can I create a large-size water caustics texture for animation?
2
Paint on Photoshop Layer and Alpha Channel with the Brush at the same time?
7
Sponge (reticulation, pores) texture in Inkscape
2
How to get this noisy fog or skies effect with a gradient texture in Photoshop?
1
Plasma lines texture
1
How to add detail and grit to vector graphics?
4
Photoshop: Uneven stroke
2
How to make a liquid metal effect
1
How to render a texture of an object from it's color, uvs and lighting?