Sometimes, applying Minus Front on two shapes in Adobe Illustrator 2021 returns a normal single shape, other time, it returns a compound path. Why? Is it possible to force returning a normal path? Or is it possible to convert the Compound Path into Normal Shape after substruction ?

If the Minus Front operation results in a single closed path, it just returns a single path.

If it results in several unconnected paths, it returns a group.

If it results in a shape with a hole in it, it return a compound path.

If you hold down Alt while clicking the Minus Front button, you get a compound shape where the bottom path is "positive" and the top path is "negative" (subtracted).

If you afterwards click the Expand button and the result is several unconnected paths or a path with a hole in it, you get a compound path only consisting of positive paths. Otherwise you just get a single path.

The blue shape is subtracted from the brown one in three cases. In the left the result is a group of 2 separate paths.

In the middle the result is a single path.

In the right the result is a compound path. It's the way how Illustrator presents paths which have holes.

Not asked: A path can be drawn with self cutting edge. It also can seem to have a hole, but it's a single path: 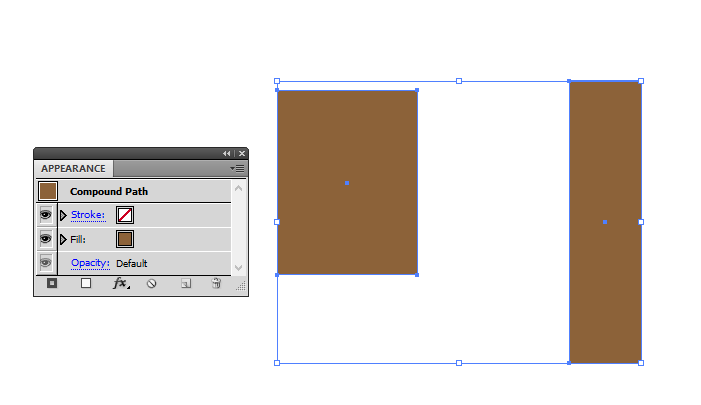 It's sometimes useful when the next operation needs a single path and doesn't work in a wanted way with a group. The most common such case is filling with a gradient:

Not the answer you're looking for? Browse other questions tagged adobe-illustrator path shapes pathfinder or ask your own question.