What is the lightest shade of pink that can contrast to white at 3:1?

I'm trying to investigate / create a pink color pallet. I need to know what is the lightest shade of pink that can give a contrast ratio (see WCAG) of 3:1 -- and maybe even 4.5:1 -- with white (#FFFFFF).

By playing around with color sliders, I think that shade of pink might be #FF5B73. However, I'm not 100% sure if that is indeed the lightest possible pink that achieves the contrast ratio that I need.

Also, any idea what might be the darkest shade of pink that would give the highest contrast ratio against white?

Pink is not an exact color definition. But you can get a free or online color contrast analyzer and search a good color that you see as pink. I consider pink is pure RGB red RGB(255,0,0) (or as well #FF0000) mixed with so much white that the saturation is 50% or less and then maybe darkened. That's RGB(X,Y,Y) where X is something from 1 to 255. Minimum 1 makes it reddish. Green and blue components can be anything from 0 to X, but they must be equal (Y=0...X).

Here's an example. It's picked from Photoshop's color selector: 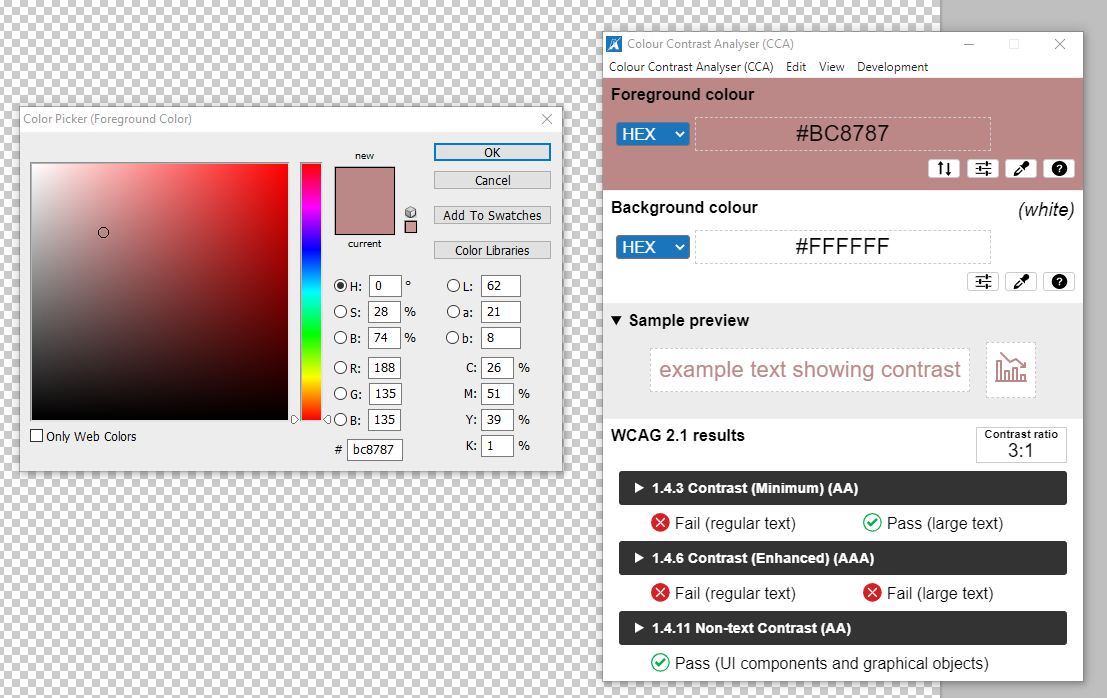 The found #BC8787 has the minimum contrast 3:1 against white.

Others can want the hue be something more blue that pure red. To find your own opinion you can adjust the hue from 360 degrees to as low as 340 degrees.

There's no actual need to use Photoshop to search the color, but it's handy because you can have the rest of the image under construction visible at the same time and see the actual color in the right context. Searching a color can well be done in color contrast analyzer only. As an advantage you can have transparency (=alpha less than the maximum). An example of the blueish variation (hue=341 degrees): 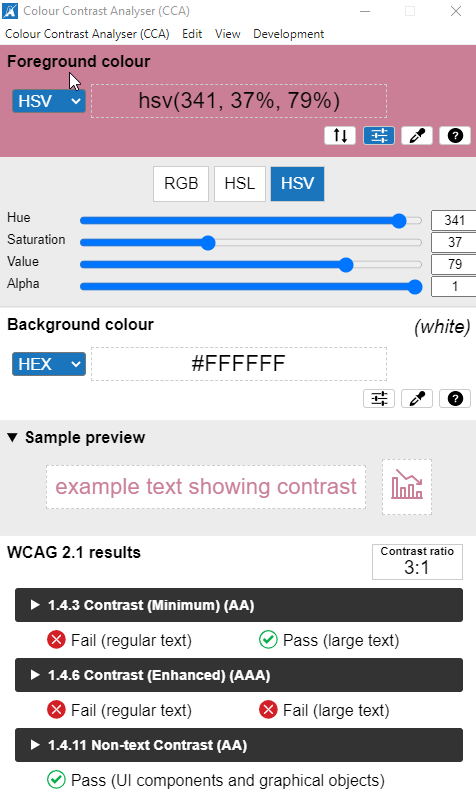 The HSV-system is the same polar version of RGB as Hue-saturation-brightness in Photoshop. Photoshop's brightness is often called value in other programs.

A competent mathematician would calculate the exact result, but I skip it due the lack of knowledge of contrast perception models.

2
Systemetic way to choose a good red & green color for dark grey background
5
How to determine exact contrast ratio
68
How does one generate a palette similar to the ones in Google's material design?
1
How to select 5 optimally visible and distinguishable colors?
2
What is the lightest shade of grey you can use for a background colour that is still discernible from plain white?
1
Given a white background, and black or grey text, is there a formula to find a link color with good contrast?
6
What shade of light grey can be seen on 99% of monitors?
3
What do I need to manipulate in GIMP to follow these specific color patterns I'm working with?
3
Determing the best X colors to provide the most coverage in a pallete?
0
WCAG Compliance - Does Acceptable Contrast Apply Only to Text? Or Icons and Other Graphics as Well?