How can I apply Photoshop's pixel aspect correction to make it "real"?

Photoshop has "pixel aspect correction", for which Google lists what appears to be thousands of answers on how to turn it off. I don't want to turn it off, but I want to apply it so that it's off but the image is now the aspect ratio that it was appearing to be with it on.

I need to make the image as shown in Photoshop with Pixel Aspect Ratio correction to be the actual way the image is.

I thought "apply" was the right way to say this, but all I see on Google and here is "how to turn it off". But I cannot think of a clearer way to explain what I want Photoshop to do. I want to apply the Pixel Aspect Ratio correction. Make it become "real".

(I apologise for any frustrated tone this may carry. If it does, it is because I am really frustrated at this point. I've torn out so much hair I have a mohawk, now. This seems like something that should be simple to do.)

To export with a different aspect ratio, you have to use square pixels and manually resize the image (non-proportionally) via Image > Image Size.

The Pixel Aspect Ratio Correction in Photoshop is merely an on-screen preview and it's not possible to "bake in" the preview. While the ratio is saved for a .psd file, it's never applied upon export because it's assumed the device rendering the image will use the aspect ratio. If you need an image actually at desired dimensions for a specific ratio, you need the image dimensions to actually match the ratio dimensions while using square pixels.

Don't use that feature. That's not what it is designed for. It's only a preview for showing what an image will look like on a device that doesn't have square pixels. 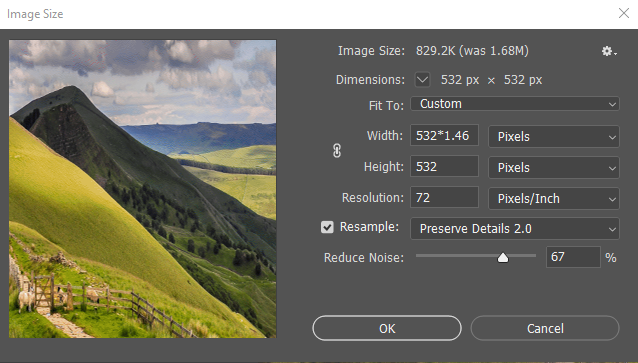 That's it, your image is now distorted to the required aspect ratio.

*Note: This will distort your image making it look squished/stretched, so if you don't want to do that then do the following instead to crop the image to a different aspect ratio without distortion.

There are other ways to change the aspect ratio of an image, such as by using Content Aware Scaling, but success would very much depend on the suitability of the image. It doesn't work with everything, but it can be used to squish or stretch an image without distorting the subject. I'm not going to go into details here, but there's an explanation of the feature here on the Adobe help site

As the other answers note, you will need to manually resize the image non-proportionally. The details will depend on exactly what you're trying to do.

Unfortunately your question doesn't seem entirely clear on this — I suspect it's a terminology issue — but what I assume is that you have a 256 × 155 pixel image intended for viewing on a widescreen PAL television display with non-square (1.46:1*) pixels, and you want to scale it so that, after scaling and exporting, it looks the same on a display with square pixels as the original was intended to look on the non-square-pixel display.

If so, the easiest solution is to scale the image width by a factor of 1.46. To do this:

Your image should now be scaled from 256 pixels to 256 × 1.46 ≈ 374 pixels wide, and still be 155 pixels tall, and should hopefully look the same on your screen (with square pixels) as it did in the original video.

BTW, not that 374 × 155 pixels is a pretty tiny image by modern display standards, so you might want to scale it up at the same time. While you can do this in two steps, you'll probably get better results by doing the aspect ratio correction and upscaling at the same time. So, for example, instead of scaling the image width by 164% and height by 100%, you could scale the width by 2 × 164% = 328% and height by 200%.

*) You wrote "1:1.46" in your question, but all the sources I've checked say that PAL pixels are wider than they're tall, so it presumably should be 1.46:1. If the pixel aspect ratio for your image actually is 1:1.46, you should scale the image height up by 146% instead.

Ps. While trying to make sure I had the scaling ratio the right way around, I fell into a fairly deep rabbit hole of multiple contradictory sources on what the actual PAL Widescreen pixel aspect ratio is. Some say it's 1.46, some say it's 1.42, and some, like Wikipedia, list both.

Apparently the inconsistency (mostly) comes down to the fact that old analog TV formats have both horizontal and vertical overscan, meaning that the image area normally visible on the screen is smaller, and possibly a different shape, than the full transmitted image — and digital video formats based on the old analog standards inherited this whole complicated mess. So you end up with different screen aspect ratios depending on whether you count the overscan area or not, and while one would think that this shouldn't affect the pixel aspect ratios (which, after all, are supposed to just determine the pixel shape needed to make a circle on the screen look round and not oval), apparently it sometimes does, perhaps due to mistakes in standards or by people interpreting them.

What also particularly confuses me is that, as far as I can tell, the claimed pixel dimensions of your images (256 × 155 px) don't match up with any of the standard PAL video formats, which typically have storage aspect ratios (i.e. width / height in pixels) between 1.22 and 1.25.

Your images, meanwhile, apparently have a storage aspect ratio of 256 / 155 ≈ 1.65, which is actually fairly close to a typical widescreen display aspect ratio of 16:9 ≈ 1.78 or 16:10 = 1.6, assuming that the pixels are square. So perhaps my original assumption is wrong, and you do in fact have a picture with square pixels, and are trying to convert it to a video format with non-square pixels.

Anyway, whatever the case, the general solution is still always the same: use the image size dialog and remember to turn off the aspect ratio lock. Then you'll just need to figure out either the correct scaling ratio (and use "percent" mode) or the actual target pixel size that you want, and scale your image to that. And check that it looks correct afterwards.

Not the answer you're looking for? Browse other questions tagged adobe-photoshop photoshop-effects resolution or ask your own question.

16
How can I achieve a sharp pixel perfect stroke effect in Photoshop?
1
Scanning 8.5 x 11 paper in PS results in huge image
2
How can I export a Photoshop DVD Menu (Widescreen) into Acrobat without distortion?
2
Changes to pixel aspect ratio in photoshop does not show in other programs
3
How can we talk about the “resolution” of a JPEG file?
0
How can I make these overlapped images more realistic?
1
How to perspective project or warp an image onto a book cover?
17
Can I have layers with different pixel resolution in Photoshop?
1
How can I resize Pixelart so that every pixel mentains its correct width and height