Can I make a font out of *.png files?

I'm making an font, but, I'm not fluent in making SVG images, I know some photo editors can do this, but the way I draw, it doesn't seem like it can be coded in SVG. Please help. I'm using Photopea.

About making font from PNG images: It's possible. PNGs are raster (=bitmap) images and there exists bitmap fonts and their editors. There are even web services which generate fonts from bitmap images but they require the images as strictly scaled and placed into a given frame.

Photopea is a finely implemented free (but shows ads) web service which resembles Photoshop and replicates a respectable part of Photoshop's bitmap and vector image functionalities (but not CMYK colors, it's RGB only). You can well draw there your font letter shapes and export them as PNGs assuming you use a service which converts them to a computer font. Photopea itself doesn't make fonts.

Computer fonts are most often based on vector shapes. Unfortunately, when making vector shapes, Photopea is approximately as limited as Photoshop. You can export vector shape layers as SVG. You can draw them for ex. with the Pen (=the Bezier curve drawing tool) but the editing and drawing tools are poor when compared to proper vector drawing programs (=Illustrator, Inkscape, Affinity Designer, CorelDraw....)

A suggestion: Get Inkscape. It's free and SVG is its native file format. Path drawing and editing tools are much more advanced that what you find in Photopea (or Photoshop or other programs which shine with raster images).

Inkscape has a simple font editor. It creates font files from your vector shapes. Unfortunately they are SVG fonts only. They are not widely supported, but at least they work in Inkscape.

Vector shapes created in Inkscape can be used in more advanced font editors which accept SVG. You can paste drawn shapes from Inkscape directly for ex. to Birdfont. Pasting works to both directions.

A warning: Prepare to fight a few days to pass Inkscape's steep learning curve of how to draw and edit vector paths. After it you can actually start to utilize the program and draw something.

This is drawn in Photopea with a solid brush: 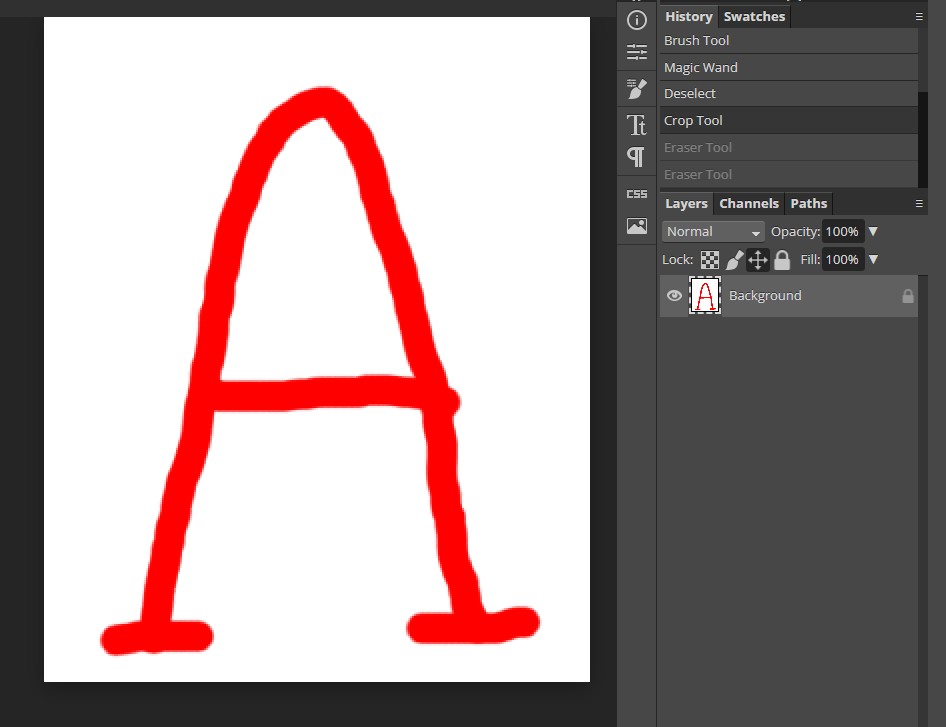 The red color is is selected with the magic wand and pasted to an empty drawing in Inkscape. It's there a raster image object. It's selected to be the next item which will be traced to vector: 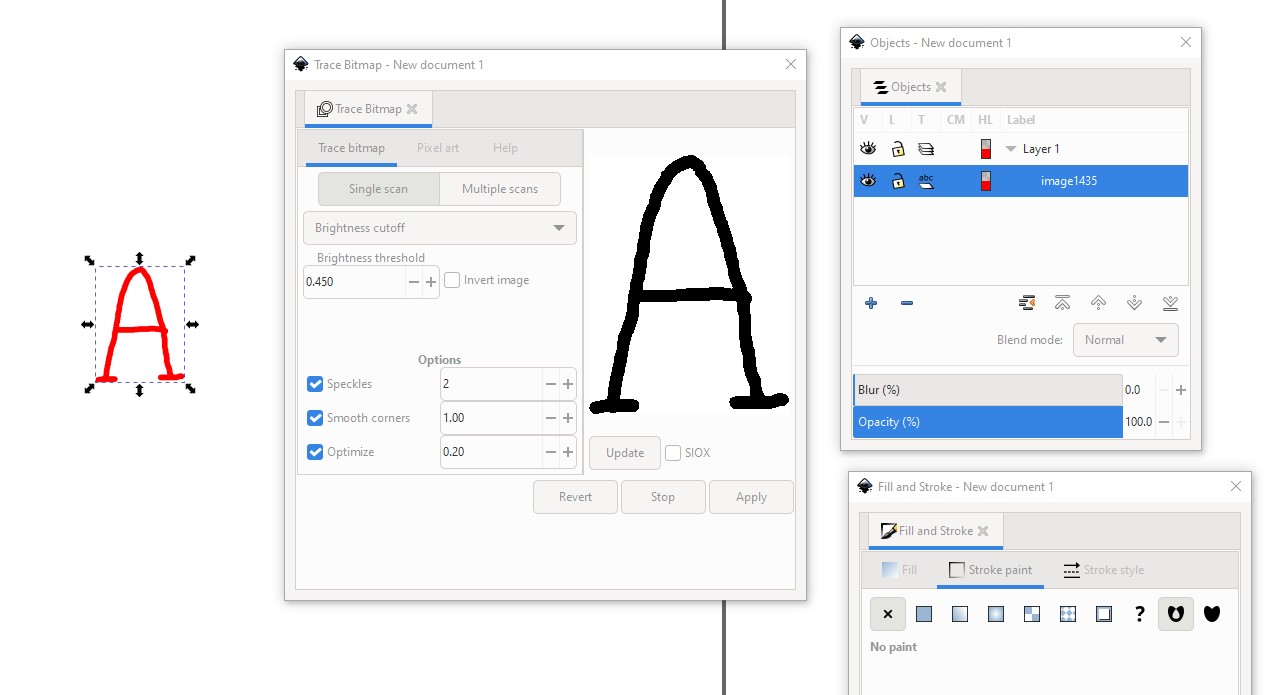 The shape is traced by applying Path > Trace Bitmap. Tracing is done in the simplest mode (=black and white, default settings). The bitmap image is below the tracing result, but it's still there. 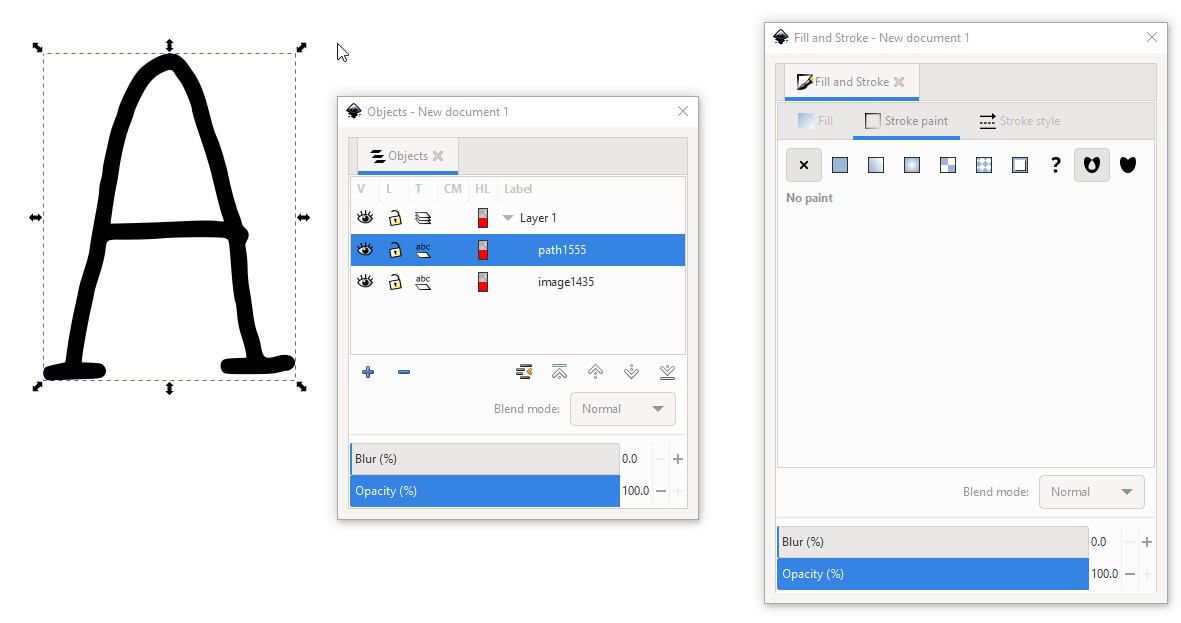 The painted area has become a vector shape with black fill color and no edge stroke. There can be a stroke due the program settings, but it must be removed for next steps.

The tracing result can be used in a font. The A was pasted to Birdfont: 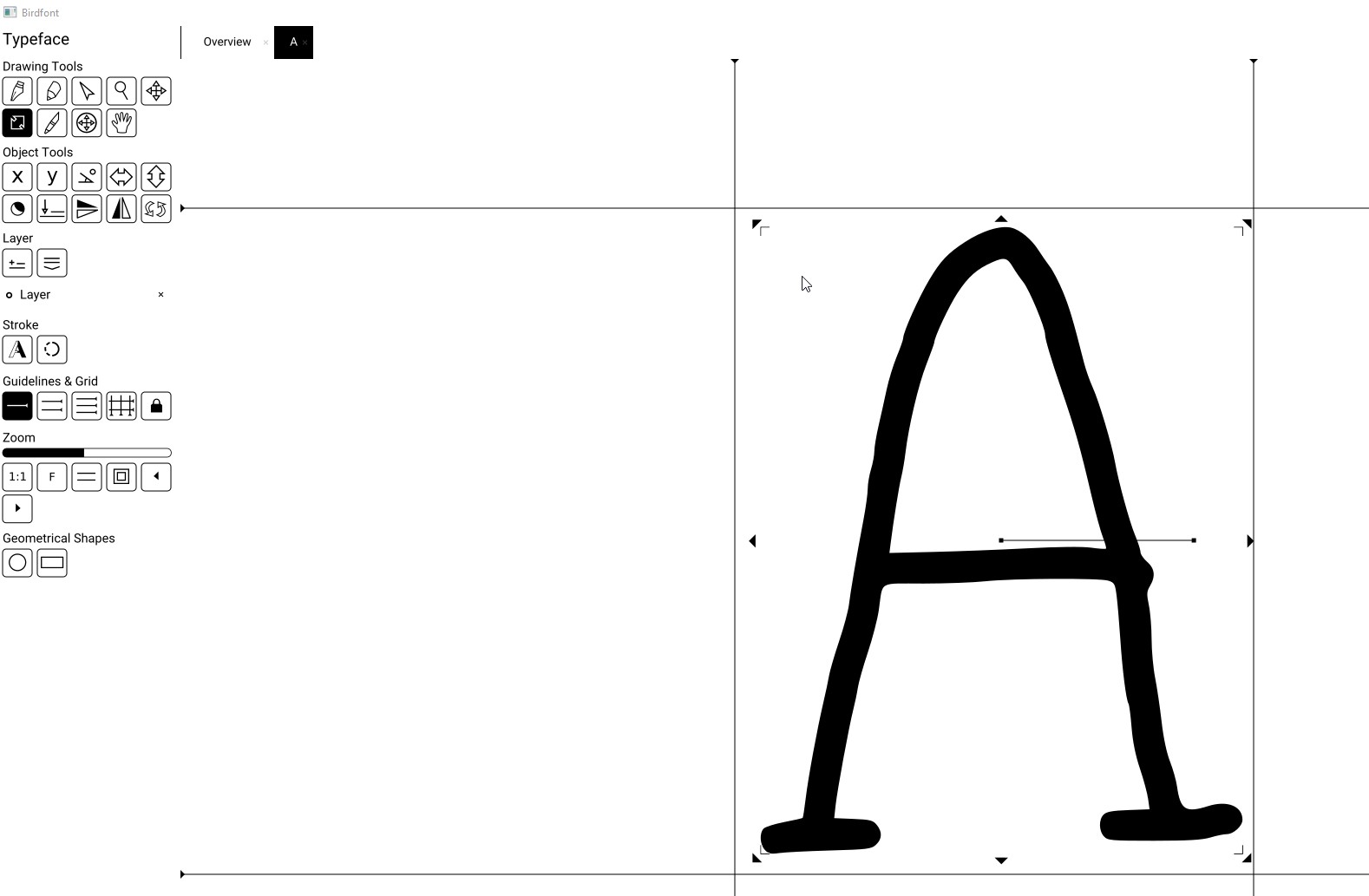 Actually it's pasted to the glyph box A of an new empty font. The box of A was opened for creating the new A from scratch. The next image is taken from the font overview. My own A is the only actual glyph in the font. Other letters are only the names of the empty glyph boxes 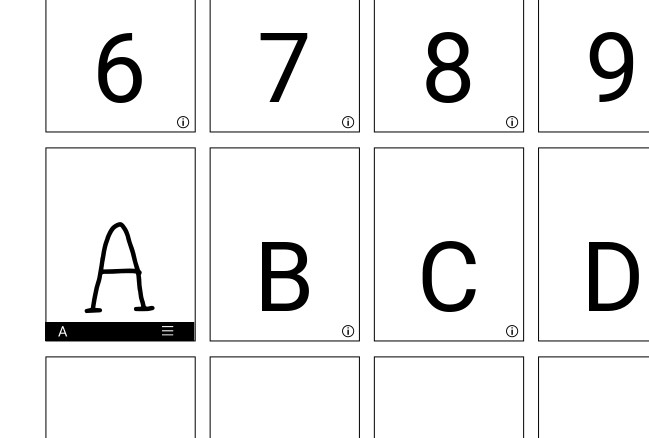 Nothing worth telling at home, I guess. Painting solid and steady shapes by using a mouse is difficult. Even a beginner would get much better results by drawing the shape with the Bezier curve tool (=the Pen) in Inkscape or in the font editor.

Another warning: It was an empty font. It would be as easy to replace glyphs of an existing font, but the makers of commercial fonts have strictly prohibited it and that's done for a good reason. Some makers of free fonts allow creating modified versions as long as the original and its creator are mentioned and the name is changed.

Not the answer you're looking for? Browse other questions tagged fonts png or ask your own question.

7
Replacing a font in many illustrator files
0
text in PNG files is blurry in IE9+
1
SVG font-weight changes when rendered in html
2
What am I missing if I have a font created from SVGs using some online application?
1
How to remove "wrinkles" on font?
0
Print out PNG image on transparent sheet
5
How can I improve at drawing calligraphic font glyphs
3
What is the font used in poster?
0
How to use this psd font?