How to set GIMP Layer boundary size to be content-aware instead of the default canvas size?

Basically I would like to make the layer boundary size content-aware so it will always fit and never limit content to spread.

Example A (Default GIMP Behavior): Here the layer "Layer" has the same boundary size as the canvas no matter if is just one pixel of non-transparent content or the full layer. 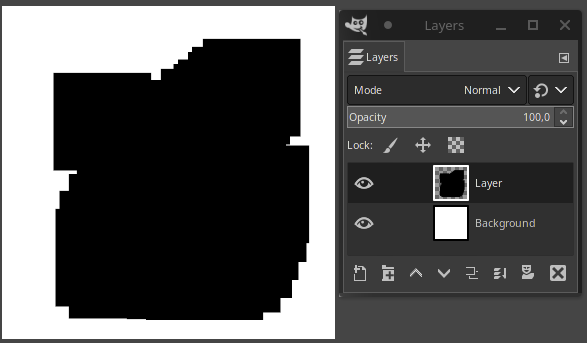 Example B: Here the layer "Layer" has the boundary size of its drawn (non-transparent) content. And If I just kept using the brush towards any direction the layer (and consequently the canvas would scale), in red was the layer boundary when I first draw something, and in blue (and the right and bottom red box) would be after a second draw has been made. 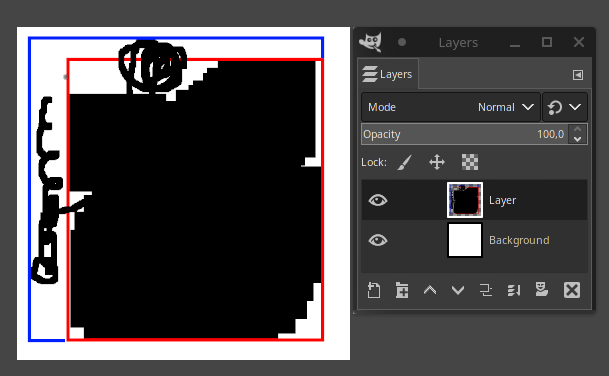 This was brought to my attention when I unsuccessfully tried to move a content to snap to a guide rule, however it only snapped to the layer boundary and not to the content.

There's no way to have the layer size change dynamically as far as I'm aware (except for dynamic text boxes). In GIMP the layer size is independent from the content on the layer. The two are unrelated. Also snapping to guides or using the Alignment tool works using the layer boundaries, not the content.

Anyway, you can manipulate the layer size manually in a few steps.

I suppose you could speed this up by setting up some shortcut keys for the commands in steps 1 and 3.

You can also use a selection to change the size of the layer.

Not the answer you're looking for? Browse other questions tagged gimp layers or ask your own question.

1
GIMP: how to create a collage where the photos can be repositioned within frames?
23
How to copy a layer group to another image in GIMP?
1
GIMP - how to make transparent brush from an image layer?
1
Add a layer on top of all the others to specifically add transparency in GIMP
2
How to set inner glow (vignette) effect size to value bigger than 250
0
Erase parts of a raster layer in Illustrator
4
How to automatically draw the edge between two regions in GIMP?
4
Gimp: Permanently disable layer boundary lines
0
How can I crop a layer in GIMP without shrinking the canvas?