The company that I work for recently had a test print with a professional printer and we noticed that our radicands, when printed, are excessively bolded.

I've scrubbed through the user guide, have looked on the internet at several locations, and have tried to make some adjustments to the styles, but am ultimately unsure of whether or not it actually changes anything. When printing it on our office printer or even on home printers, the radicands seem to be normal and have no issues.

As far as technicals go, we gave our printer high quality PDFs instead of package files.

Has anyone experienced anything similar to this and might be able to suggest some possible solutions for us to try? 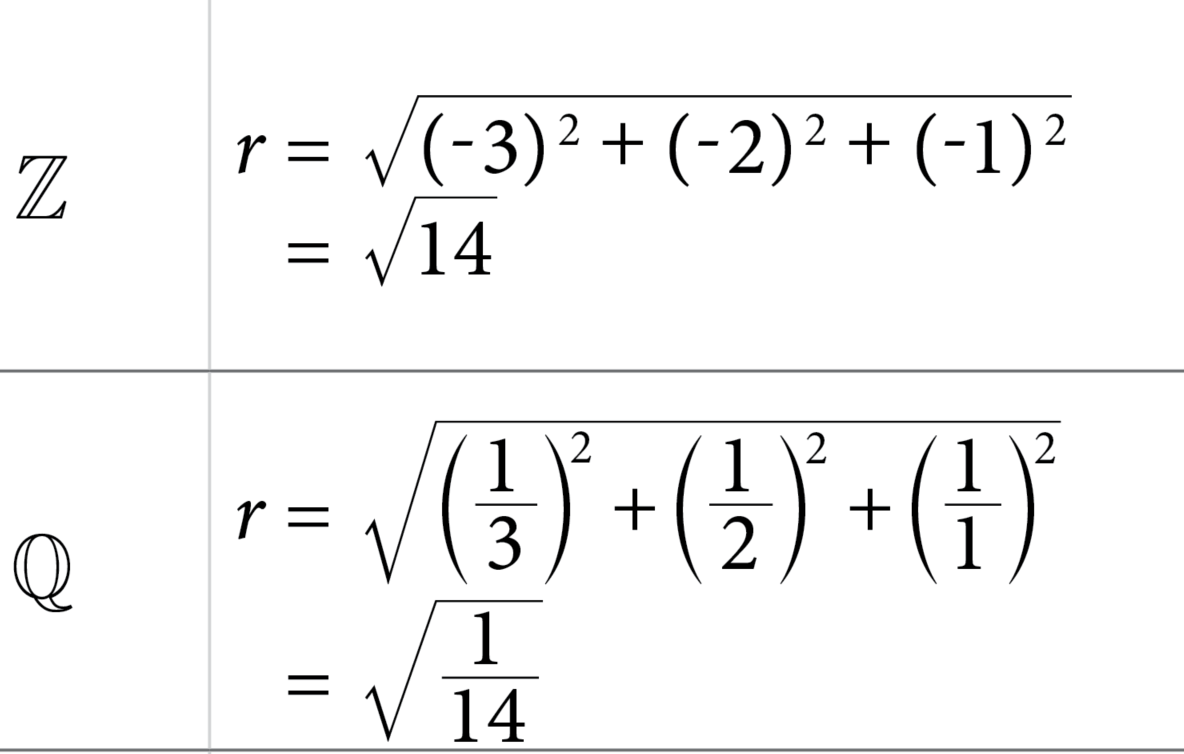 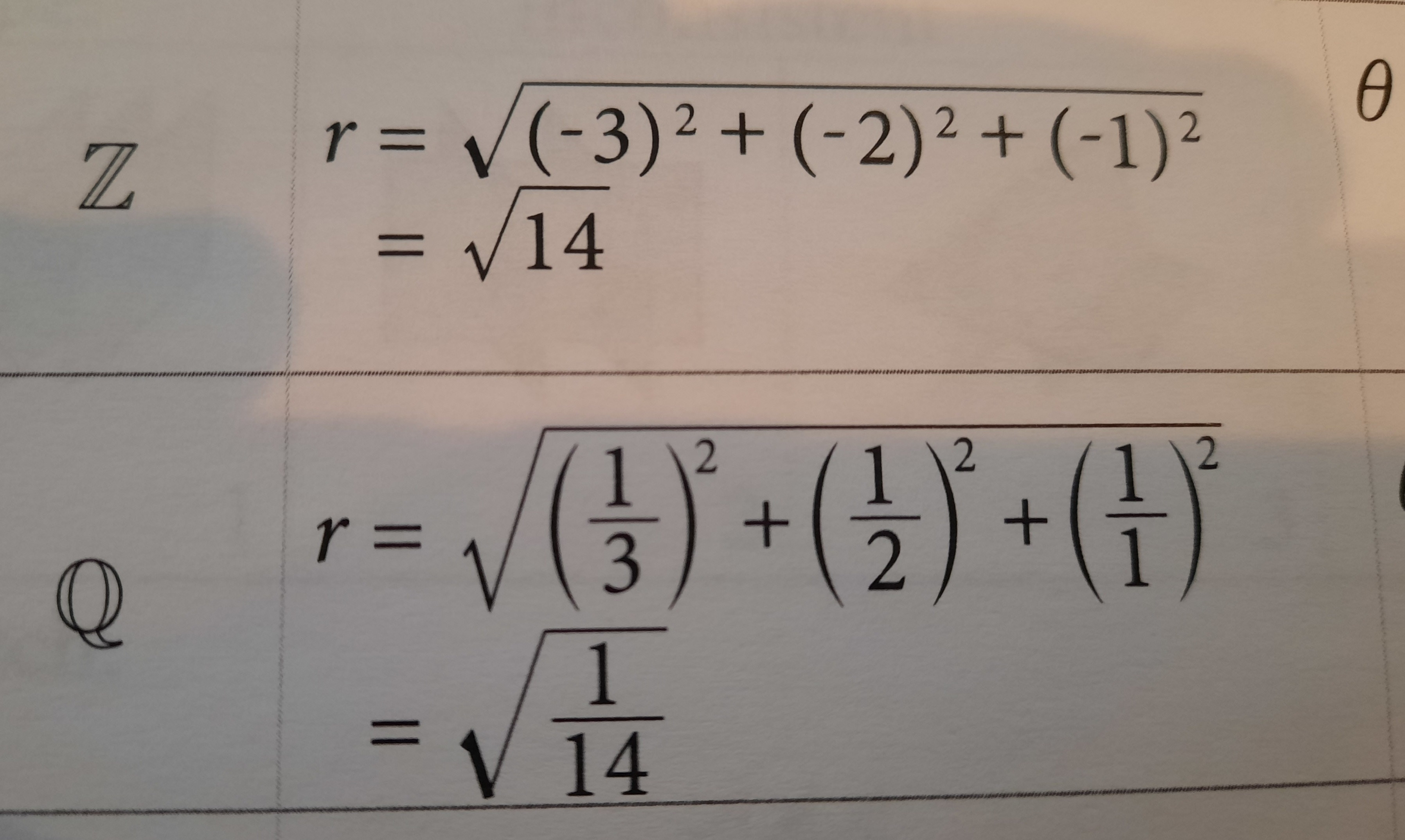 I have run MathMagic, but not the InD plugin version, only the trial of lower cost MathMagic Personal. I guess it gives some information of the functionality of MathMagic's core.

I have a formula PDF which resembles your equations and tried to see in Acrobat what the PDF contains. The formula is an EPS image and its color is plain process k. A couple of fonts are embedded and that's all.

I opened it also in Illustrator. The formula was editable there. The layers panel shows that it's a group and under a rectangle clipping mask: 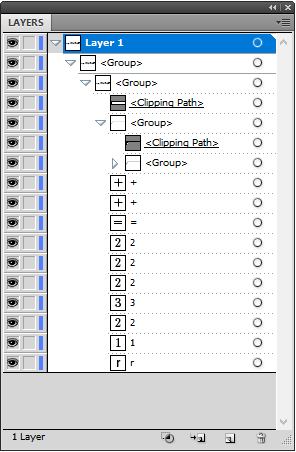 But that's common when one opens PDFs.

The square root has an incredible construction: 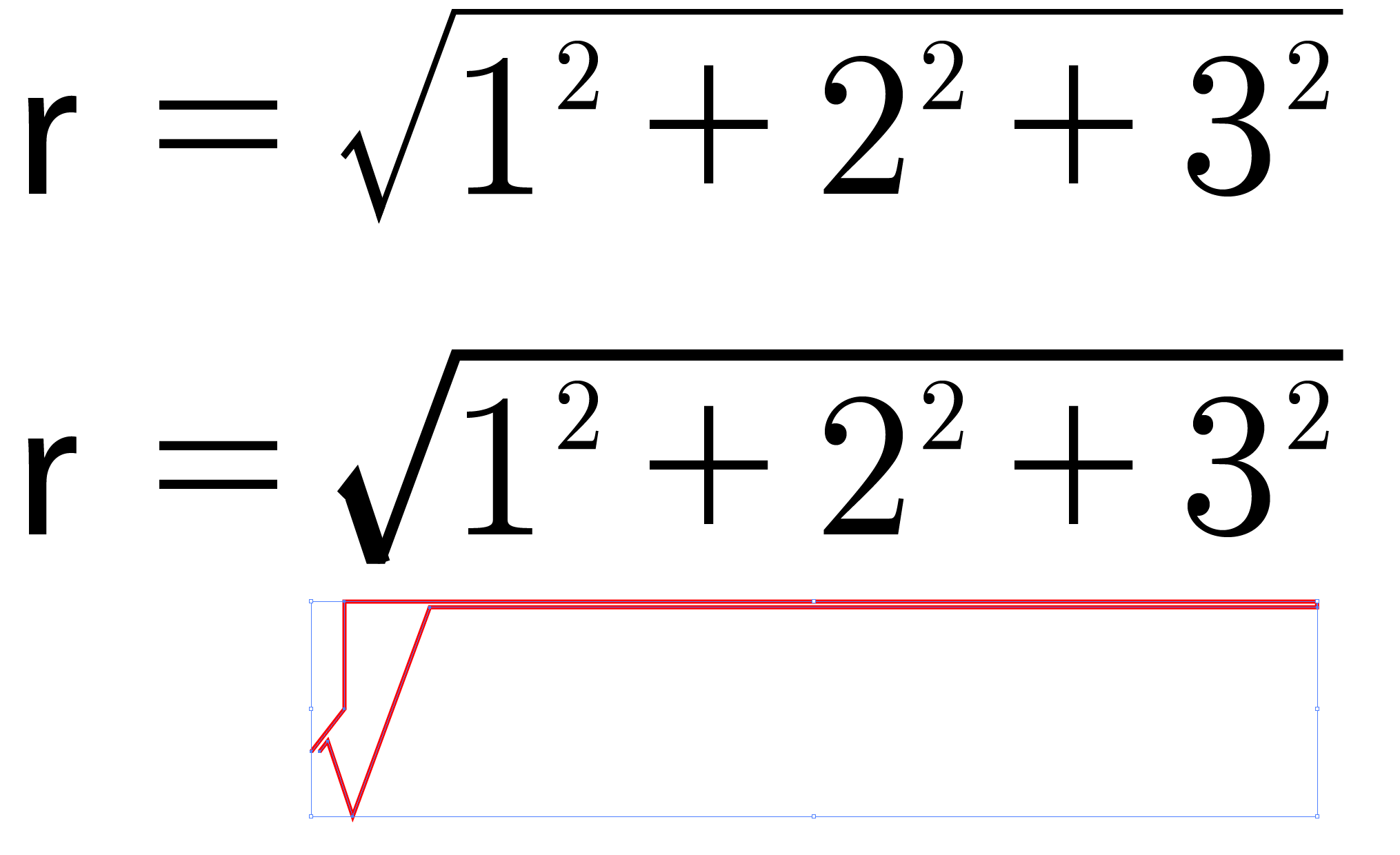 The square root symbol is a thick path - like your "bold" ones. Or actually it's a group of several separate lines with different widths. It has an own clipping mask. The mask is thin for good looking final form. I separated it and gave to it a red stroke.

The mask has a gap, it's not a closed path. Illustrator and probably other Adobe software, too interprets it OK. But the machines of the print shop may see it differently.

I do not know standards well enough to say who doesn't act right.

If the formula is saved as metafile the square root would be much simpler. But that's RGB and must be converted to CMYK for pro printing. In addition the metafile version seems to have straight stroke ends. Converting them to rounded make it look more polished.

These dialogs in Illustrator can be used for the conversions:

The colors must be changed at first to CMYK and then the rich black must be adjusted to CMYK(0,0,0,100%) for sharp printing - that's the same as how black texts are commonly printed.

The SVG export has the same complex (= masked) square root symbol, but the mask is built differently. Every line item in the symbol has 2 separate clipping masks to fix the final form. The construction was too complex for my legacy Illustrator (=unreadable trash), but Inkscape showed it right.

As I said, the square root symbol is much simpler in WMF. I guess the PDF and SVG versions have some quick and dirty attempts to make symbols, which cannot be taken from fonts, to look more sophisticated. The attempts unfortunately need still some fixes, I presume.

If one explores the website of MathMagic he can find plenty of sellers but not a single address where he could ask something technical. I guess those addresses are wiped off for a good reason.

BTW. One can wonder why the same formula as PDF and as WMF has different variable r. Illustrator is seen (by Adobe) as an attempt to pirate fonts which are embedded to PDF and they are substituted with installed fonts.

Not the answer you're looking for? Browse other questions tagged adobe-indesign digital-printing or ask your own question.