Many questions have been asked about the general practice of converting rasterized images into a vector format, but this is not quite the same question I am asking.

Specifically, I'm interested in software/algorithms designed explicitly to convert antialiased, two-color raster images that were known to be created from vector images back into a vector format. I am aware of general purpose path tracer algorithms such as the ones that Inkscape comes with, however they tend to do quite poorly with regular basic shapes (such as a rounded rectangle) that are supposed to be uniform and mathematically prefect.

It seems to me that, given the knowledge that an antialiased raster image was created from a vector, that some degree of deriving a mathematically accurate vector should be feasible. Obviously the original Bezier handle information, etc. is not recoverable, but close approximation (closer than most path tracing algorithms that show up on the first page of Google results) seems realistic. To my knowledge, an antialiased line should indicate the (approximate) subpixel location of a line that passes through a 2x2 pixel area, therefore it seems probable that some software might be able to use this assumption to extract some additional information to ensure the resulting vector passes through/near the approximated subpixel location. However, I don't know of such software should it exist.

Therefore, does such an algorithm/software designed to re-vectorized rasterized vector images exist?

Imagine you bake a cake.... you know what the basic ingredients were at the start... but there's no way to reverse engineer the cake to get the back eggs, flour, sugar, water, etc. in their original state. The cake has been baked.

Perhaps centreline autotracing is what you are looking for, however it has its limitations. It can work reasonably well on simple shapes which are separate, but will mess up spectacularly with anything more complex such as overlapping shapes, or lines which cross over each other.

I think that would require some kind of AI subroutine (or human) to recognise specific shapes and separate them out before tracing commences, more than just an algorithm.

When you start talking about computers "knowing" things, that implies AI, some kind of pattern/shape recognition, probably using a database of example images to check against. Might be possible some day, or perhaps someone is working on something like that already. I've no idea, and this is merely speculation.

Anyway this is an example of Inkscape's centreline autotrace 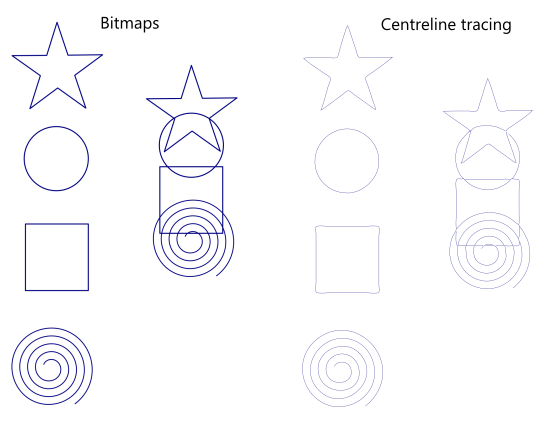 Trace results for separate shapes are OK (or should I say OK at a distance), but nowhere near perfect on closer inspection. It seems to do curves better than corners. Also the larger the bitmap, the better the results seem to get, and so it's very much dependent on the quality of the original bitmap.

Overlapping shapes are almost a total failure, as the software knows nothing about the specific shapes. It's just an "idiot" machine. 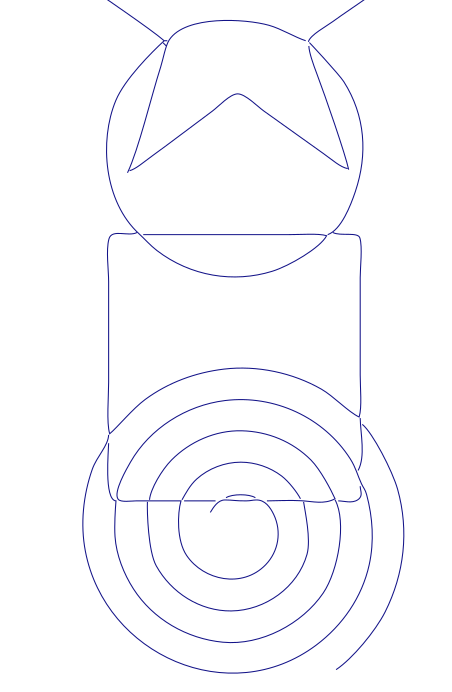 It's partially possible. There are available special tracing tools for engineering drawings and maps which take into the account that the original was of a certain image type. They do remarkably better vectorizing job than Illustrator or Inkscape, which fail where lines join or have crossings.

One low cost commercial example I have tried (and it worked): Vextractor https://www.vextrasoft.com. The next has so high price that I have not even bothered to ask a trial: http://www.easytrace.com (see NOTE1)

Then there are the general geographic information systems (=GIS, free and commercial ones) They are monsters which have also tools for converting raster images of maps to vectors. They may claim "automatic tracing", but that's not 100% true. The raster image needs some manual cleaning at least when everything is black on white. An example: https://www.youtube.com/watch?v=QMTUFfE2VXo

The next one vectorizes CAD drawings https://www.raster2vector.com The price of the software is not public, one must ask a quotation and if one wants a trial he must look a potential purchaser. That's an effective way to keep away non-profitable punters and probably a good bunch of others, too.

Optical character recognization from images of texts can be considered as the ultimate version of the idea. It's available as a tool in Adobe Acrobat and Microsoft One Note. There are also free OCR programs. Search for "free OCR" Check also this compilation https://www.adamenfroy.com/best-ocr-software

But the success is based on assumption that the image content originally before rasterizing had sharp edges and somehow limited variety of shapes. The program tries to find which possible shape fits best. With an arbitary image content it is impossible - the program cannot know what part of the blurriness is actual image content and the idea of trying which fits best is impossible if there's no limitations for the forms.

NOTE1: Both of them come from Russia.

Not the answer you're looking for? Browse other questions tagged vector software-recommendation raster or ask your own question.

32
What are the differences between vector graphics and raster graphics?
7
Digital asset management software recommendations?
1
Term for the process of converting a raster image into a vector - 'vectorization'?
6
Using "vector-like" raster images in PDF documents
3
Using inkscape to convert scanned color drawings to svg -- recommended or no?
0
Pixlr - Transparent image with Text layer on top . Layer must be rasterized?
8
The description and interpretations of TrueType font points and curves
1
300dpi rasterized image, what dimensions?