How can I easily convert a plaintext list of HEX values to an adobe ACO/ASE color palette file?

I have a list of colors in #XXXXXX format. How can I convert this list into a swatch (aco/ase) file? If it's not possible I'll settle for converting to an image.

Any help would be awesome.

Plain text appears to be a stumbling block due to aco/ase files being binary. Over the years there's been some scripts developed to convert things like .csv files to swatches, but most of those resources are hard to find any more (at least for me). Lots of dead links and empty rabbit holes. They are at the Adobe community site, but since Adobe changed from "forum.adobe" to "community.adobe" they are very hard to find.

However, CSS files are not a problem using current Photoshop versions.
(This might also work for other Adobe apps. I never bother trying.)

So merely edit the text file so it resembles a CSS (Cascading Style Sheet) file in a minor way.

.. and merely added a closing CSS bracket to the end of the list...

After adding the bracket, save the file with a .css suffix.

Tested, you only need the last, closing, bracket. You don't even need an opening bracket or any other CSS markup. Although full CSS markup will also work.

Then using Photoshop ... choose Load Swatches from the Swatches Panel Menu.
Navigate to, and open, your .css file.
Or use Replace Swatches to have only the new swatches in the panel.

All the the hex colors in the .css file will be seen and loaded as swatches.

It's fairly forgiving. You don't even need to separate colors in any way... 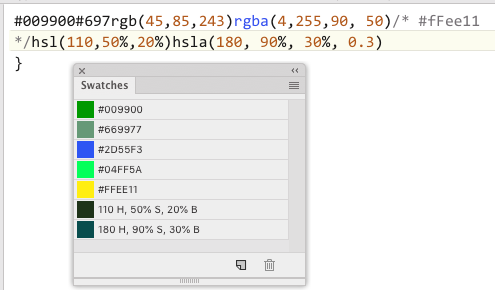 As long as that closing bracket is present it'll work.

From here, you can save the file to .ase or .aco formats using the Photoshop Swatches Panel Menu.

Not the answer you're looking for? Browse other questions tagged color swatches hex or ask your own question.