I created the image shown below by shooting ten-second long exposures of drifting clouds (contrail) and stacking them. (They are false color because I isolated them from the daylight sky to separate my concerns to the cloud drifting alone.) 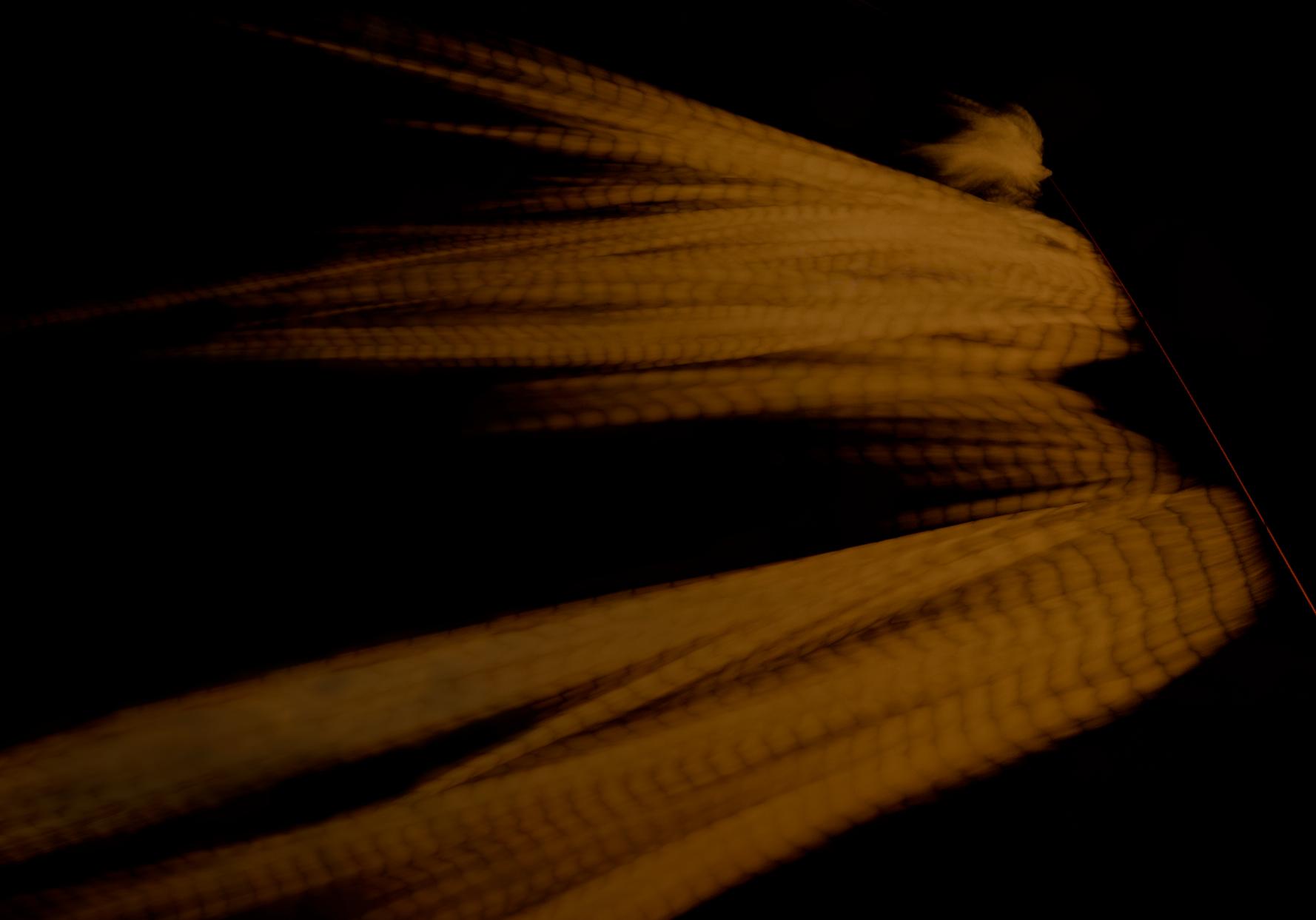 Since each frame stacks using the brightest pixels per frame, we are left with darker borders around each frame, "bands" that cut through the clouds perpendicular to their drifting motion. I want to eliminate these artifacts and restore the clouds to something resembling what we'd expect from a longer long exposure. I also want to do the best job possible at preserving the thin "stranded" details of the clouds in the path of their drift.

I have tried using the Spot Healing Brush along the "bands" with different blend modes and all three "type" modes without success. I also tried manually brushing over the "bands" with the Clone Stamp tool using the Screen and Lighten modes which was barely acceptable in quality but would likely take an entire day of manual brushing to deal with the full image.

What sort of techniques can I apply here in Photoshop, or other software if necessary, to achieve this goal?

Your combining method should be changed. Instead of gaps there should be leading and trailing slopes which compensate each other. An example (a painted one, no real cloud image sequence available here): 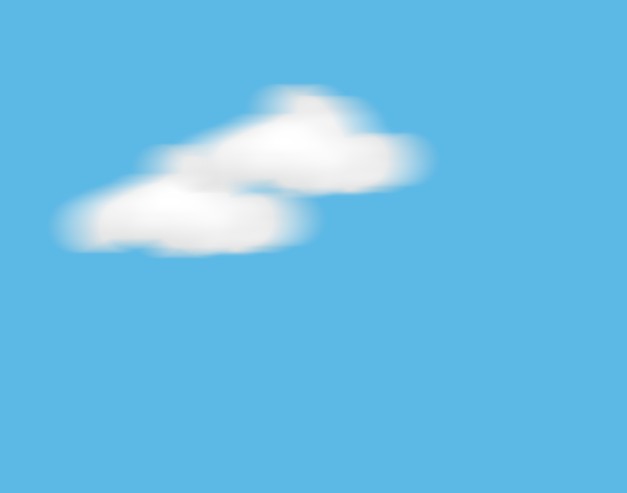 That's a 10s exposure image of a drifting cloud with low DIN, small aperture and grey filter. It's not totally overexposed, there's some brightness variation and - of course, there's heavy motion blur. In few minutes I'll get enough of them.

The blue sky is nearly as bright as the cloud. It can be darkened in Photoshop by applying Image > Adjustments > Hue/Saturation > Blues adjustment which is set to reject blue: 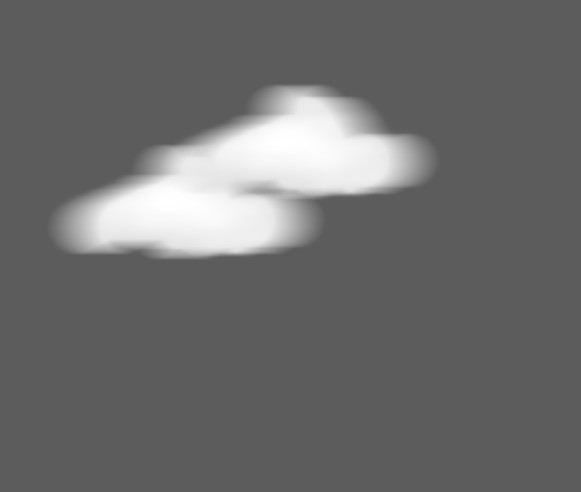 As well one could turn down the blue and green RGB channels in the curves adjustment, but leave the red and then desaturate.

One way to combine images like this is to use blending mode Add (also known as Linear dodge). The brightness of every photo must be reduced with curves to make the blue sky totally black and to make the clouds to cumulate without clipping to full white. This is my adjustment: 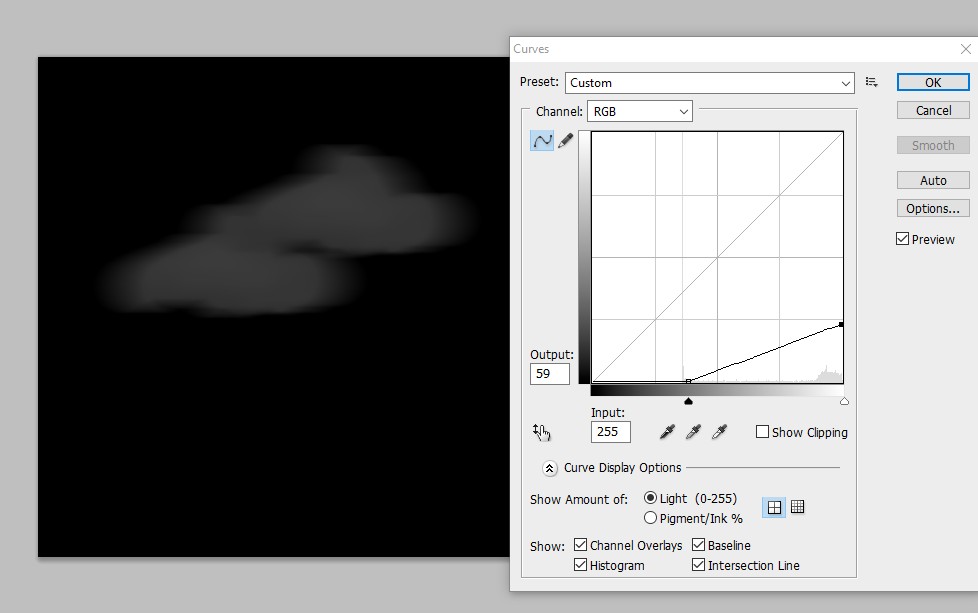 It's still too bright, but the dark end is black => reducing the opacity in the stack fixes the too high brightness.

The stack, of course, is made here by making duplicates and moving the cloud manually to right. There's inserted solid dark blue background layer.

An adjustment layer can be used to get more contrast:

One possible option would be using some AI tool used in video to add motion blur.

Some video editors have something called Optical Flow, where they analyze where the pixels are supposed to be between frames, generate some motion paths and add blur to them. I do not have specific tools.

If the application you use has the option you need to add the settings of motion across all the frame, not center-weighted.

Then you would need to export the frames again in the proper resolution and merge them into one image.

But that is probably much work...

1
How do I print text from Photoshop without artifacts?
5
How can I remove compression artifacts from an image?
3
What is the best way to remove the clouds from the background?
5
Remove LED banding from photos sony A7III
0
Denoise and reduce JPEG artifacts from a grayscale historical document on microfilm (Adobe CC preferred)