Is there any way to convert a PNG image into SVG?

I am using adobe xd. And there are some image that needs to be updated,

but the only problem is the image is already in PNG so every time there are any changes needed I will have to do it in Photoshop by erasing the layers and doing which is not perfectly a suitable idea.

Is there any way I can convert a PNG image in SVG mode?

Example, this is an image and I want to remove the money bag from the girl's hand and add a piggy bank instead, but since the image is in PNG mode how do I do it? 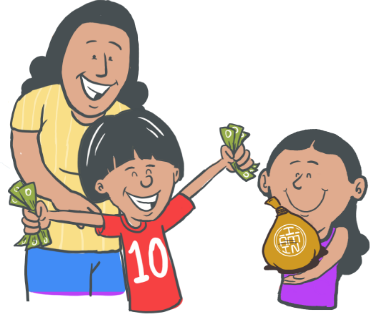 Nothing automatic or nearly automatic is available except pasting so big piggy bank that it covers fully the current money back. I guess that will not be an acceptable solution.

PNG is bitmap image format. It's put together of separate colored pixels. No pixel knows anything of the others. The only possibility is to change the colors of those pixels which have wrong content. In practice you must open the image in Photoshop, GIMP or other bitmap image editor and paint to a new layer the parts which must be changed. You may speed up the process by pasting the piggy bank from another image, but if it's not bigger than the current money bag you must repaint a part of the girl image manually.

You may have heard of tracing bitmap image to vector. It's possible also now and the result can be saved as vector SVG. For ex. Inkscape has that capability and tracing works there well. But tracing will make vector shapes by colors, there will be no separate money back which could be changed to the piggy. Editing the vector shapes to the wanted forms is possible in Inkscape, Illustrator or other vector drawing program, but the job will be as difficult than repainting the wrong parts.

To get a vector SVG the edited bitmap image must still be traced to vector.

If one is not familiar with vector editing, getting started is substantially more difficult than editing the bitmap image.

Tracing your attached image version makes an useless result. The image is far too noisy and blurred. If it's all you have the only way to get a high quality SVG is to draw one. An experienced vector drawing program user may be able to do it in a hour if he keeps your image below as a reference. We call it manual tracing. A beginner may need days to learn to draw good enough smooth curves with varying widths.

If you have a sharp high resolution bitmap image the tracing result can be very good. In that case it can be a good idea to draw the new parts as vectors and let them simply cover what's below them and save as SVG.

BTW. The piggy bank version is alredy made here but it's a low resolution bitmap version https://iaminworld.com/campaign/img/grade2/8.jpg In addition I have no idea how glad they would become if you took it.

One possible method - which isn't automatic, and will require manual work, and some skills.

Using a vector image editor such as Inkscape or Illustrator (or perhaps directly in XD), make some shapes over the original bitmap to hide the bag, and reconstruct the shirt and part of the face that would be behind the bag. 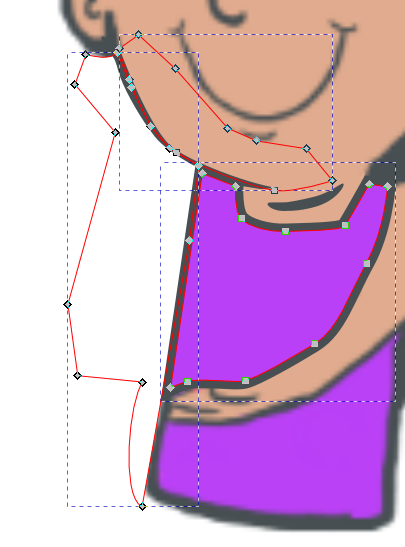 Select all, and copy and paste into a raster image editor such as GIMP or Photoshop. Adjust Levels to make the lines darker, and remove the colours using the MonoMixer in GIMP or B&W filter in Photoshop, leaving only the black outline.

Select all, and copy and paste back into your vector software, and Auto Trace the black outline in Inkscape or Illustrator (sorry XD doens't have auto trace, but you could also use online auto tracing tools). Add colours back afterwards. Illustrator has LivePaint and Inkscape has a Fill Bounded Areas (Bucket Fill) tool which could help recolour the artwork. 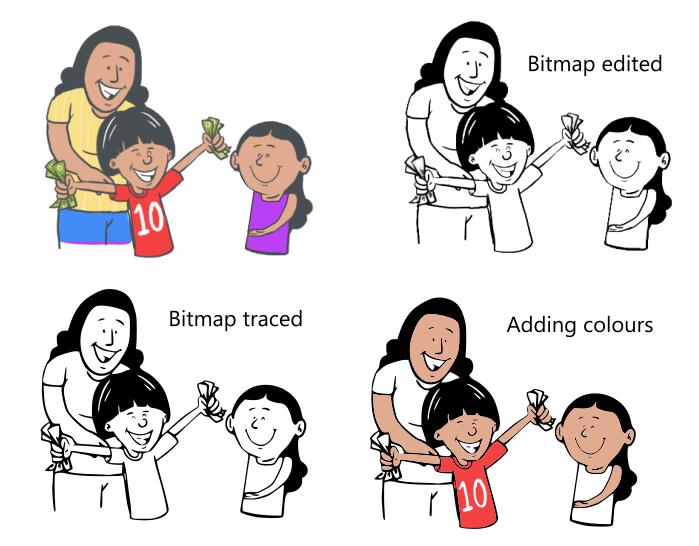 And finally add your piggy bank image, rescale and position as required.

11
Is there anything that can read, import or convert CMYK SVG?
4
How to convert a gradient mesh created in Illustrator into a browser-compatible, scalable SVG?
1
PharmGKB diagrams; how do I convert them into customizable svgs?
5
How do I overcome this PNG rendering problem of a SVG?
0
Transparent white PNG to SVG vector
2
Batch convert 5000 vectors to PNG with transparency
0
Convert png into svg and then use it in html between svg tag
2
Remove raster image(s) from SVG