I'm interested in printing some very large installations from a digital file -- i.e. 10,000 square feet. This is for a cheap art-school project, so labor and quality are NOT concerns, but COST is.

For this purpose, I bought an old color laserjet with knock-off toner, which brings the cost per full-coverage 8.5*11" page to less than 5c per page (plus the cost of paper, which I presently get for free). So my idea was to simply print thousands of these sheets, and with the help of many friends, literally tape them all together with sticky-tape before affixing the whole thing to a giant wall.

SO MY QUESTION IS: Where can I find printing at a lower cost than this? I'm willing to do lots of research and deal with strange business relationships, but I don't know where to start looking. Obviously one possibility would be to divide my 10k feet into larger sections and get them printed by any old "large format printer", but from what I've seen those are pricey.

You're unlikely to find printing for less than that, so I'd suggest thinking about other non-printing ways of getting a digital design onto a physical wall.

The best option depends on the nature of your design, but here's a couple I've heard of:

1: Use a digital projector as a guide.

This is a popular option for artists who start digital then move to physical media. Project your design onto the wall (in your case for your massive wall, you'll need to figure out the largest area your projector can cover without distortion then work section by section until the wall is covered), then use the protected image to guide whatever media you use. One option could be, project your image's CMYK separation layers one at a time, buy a load of CMYK spray paints, and paint the wall one layer at a time - cyan, let it dry, magenta, let it try...etc - like a human printer.

The disadvantage of this method is, there's a high skill and time requirement, lots of room for human error - particularly as you'll be working in sections equal to the max size of the projector: it won't be easy to make them consistent and perfectly dovetailed together. Depending on where the wall is, you might also need to work after dark to see the projected light clearly enough.

The advantage is, you can get a decent projector for less than half your other estimate, and it's an investment you keep not money lost (you'll need to figure out how.estimate the cost of the paint or whatever you use). If spray paint is too expensive, consider investing in a second hand wide area air brush, maybe with an electric compressor rather than compressed air cans, then you've got more choice of paint or ink and again it means more of the budget is a reusable investment than money down the drain.

Example image of a small art projector being used with a canvas: 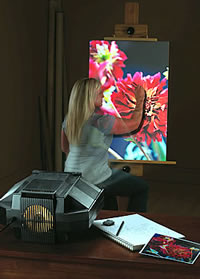 I'm not actually joking here. One example of this in action is an awesome exhibit opened recently (Mind Out by Matthias Jones, here's a write-up by FastCo) where a home-made robotic plotter printer contraption doodles on a wall based on digital input (in their case, an algorithm based on bee psychology... yup, it's an interesting exhibit). 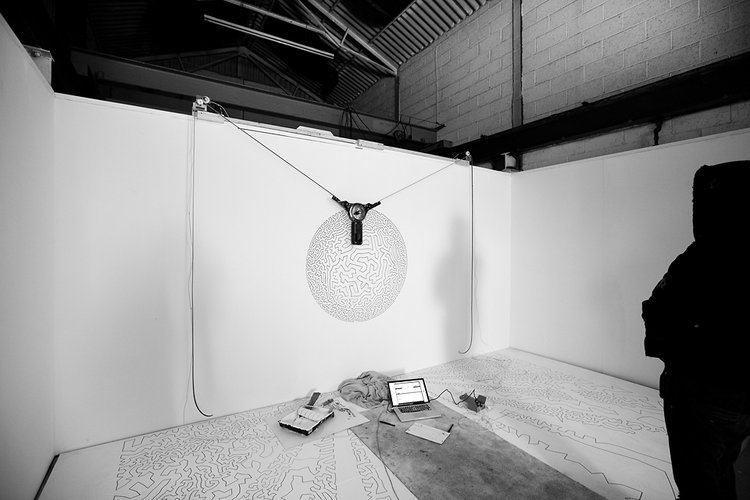 It's certainly not easy to make such things (definitely not to the high level of accuracy and sophistication in that example), but there's never been as much out there to help you get started making things like this, nor as many sophisticated components available at low prices, nor as much of a community of 'makers' who might be able and/or willing to help or advise for free if your project is interesting enough.

If you've got (or, got access to) good technical skills and plenty of time, you could build a rig using something like Arduino to read the vectors of a design you create in something like Illustrator and draw them on the wall. Then, you fill in by hand whatever elements of the design need a human touch and can't be turned into vector line art.

It's not half as crazy as it sounds. It sounds very crazy, which means "not half as crazy" still contains quite a lot of crazy, but it's a possibility, and could be surprisingly cheap if you can source the parts cheaply and get help doing the construction yourself.

Similar to using a projector, much of the project cost will be the capital cost in buying the Arduino kit or equivalent and the components for the drawing mechanism and motorized pulley system, but rather than that being money that disappears, you finish the project with a cool contraption you can use in other projects. And you'll have more affordable ink or paint options than over-priced printer cartridges.

Do be realistic though, and make sure you've got access to expert help on the technical side of things (depending on where you're based, there might be a local Arduino club, for example). You don't want to complete the project with nothing to show but a blank wall and a box of half-built robot parts that don't work.

Depending in what your printing, you could screen print it by hand. You can do digital images by separating each colour into separate dotted images, exposing each one to a screen and printing them in top of each other. You'll get the same sort of detail as a newspaper print. Then you can screen print it onto giant rolls of paper. You can get 10x1.5m rolls for about £20. If yo have access to these materials, hand printing it would probably be cheapest and it's a really nice quality too (bonus!) good luck!