How to draw 300 lines in a circular pattern?

I am trying to draw a spoke pattern with 300 spokes converging on a circle at the center in Adobe Illustrator. I would like each spoke to represent a different category at the end. And the middle circle will represent an umbrella category. I can individually draw 300 separate lines but there might be an easier and efficient way to do this. Can someone please help me? I also have GIMP, Inkscape, and Procreate if it might be easy to do on any of these softwares rather than illustrator. 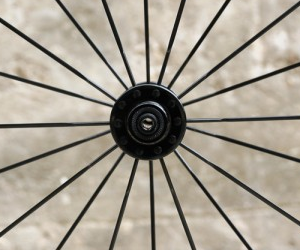 If you then want access to each individual path, choose Object > Expand Appearance, then Object > Ungroup, and you are left with 300 paths around a circle converging at their center. 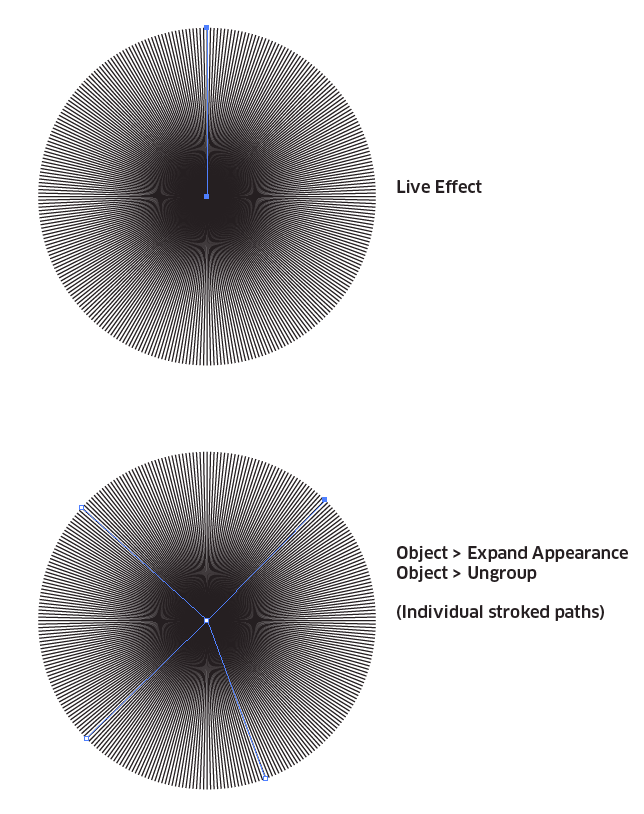 It takes far longer to explain this than it does to actually set it up in Illustrator.

Note I'm using an older version of Illustrator here. The Effect dialog window may look slightly different but the operations are the same.

Since Scott has already mentioned the way I'd do it in Illustrator, here's a way to do it in Inskcape that is very similar.

Draw one line, and open up the Path Effects, hit the Plus icon and add a Rotate Copies Live Path Effect.

Set it up like this, type 300 in the number of copies, no need to set the angle, Inkscape will work it out for you. 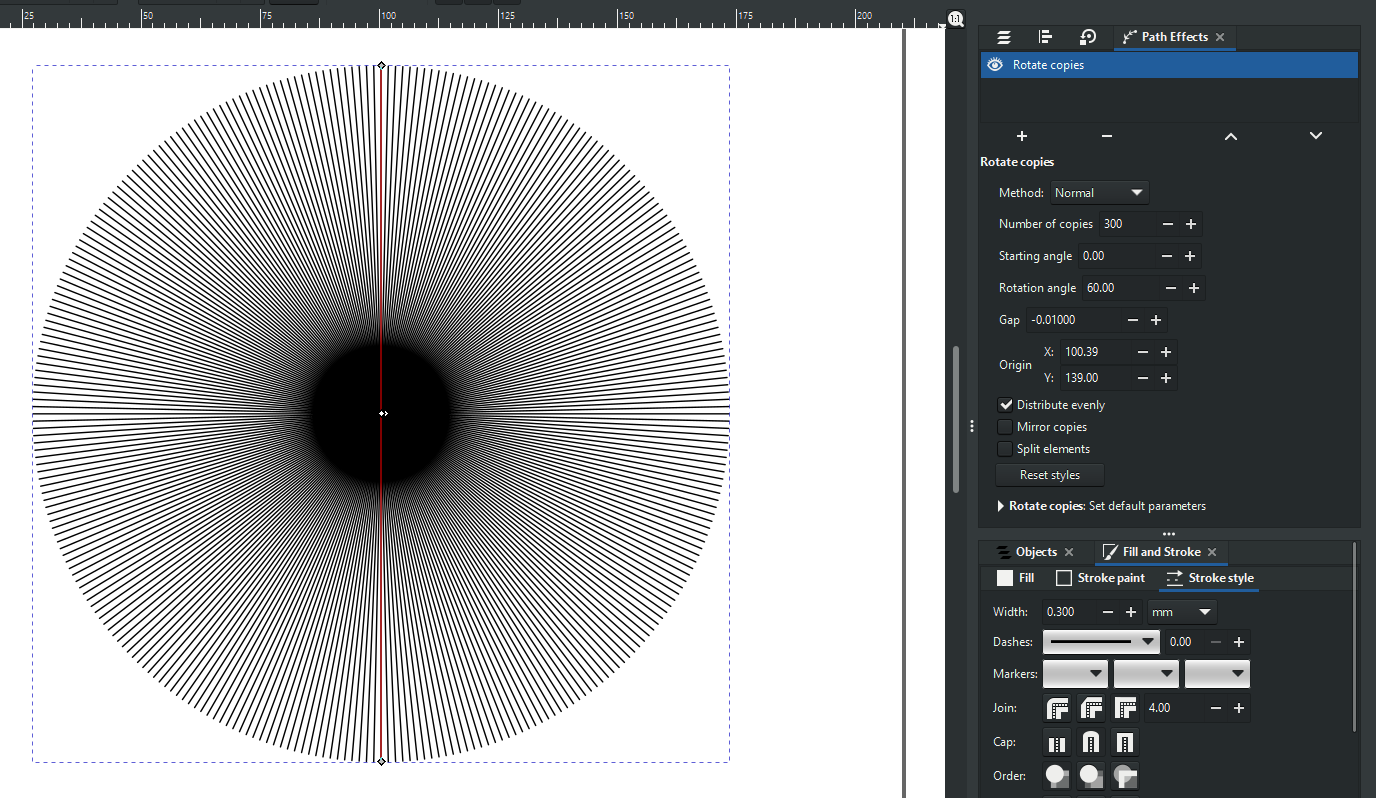 If you need to create actual paths, you can bake in the Effect (equivalent to Expand in Illustrator) by doing Path > Object to Path

Edit - a slight mistake here, since I rotated around the centre axis of the line, there's actually double the amount of copies here. Set a value of 150, and you will get 300 spokes. If you set the rotation centre using the Edit Paths by nodes tool to the end point of the line instead, type in 300, you will get 300 separate lines. 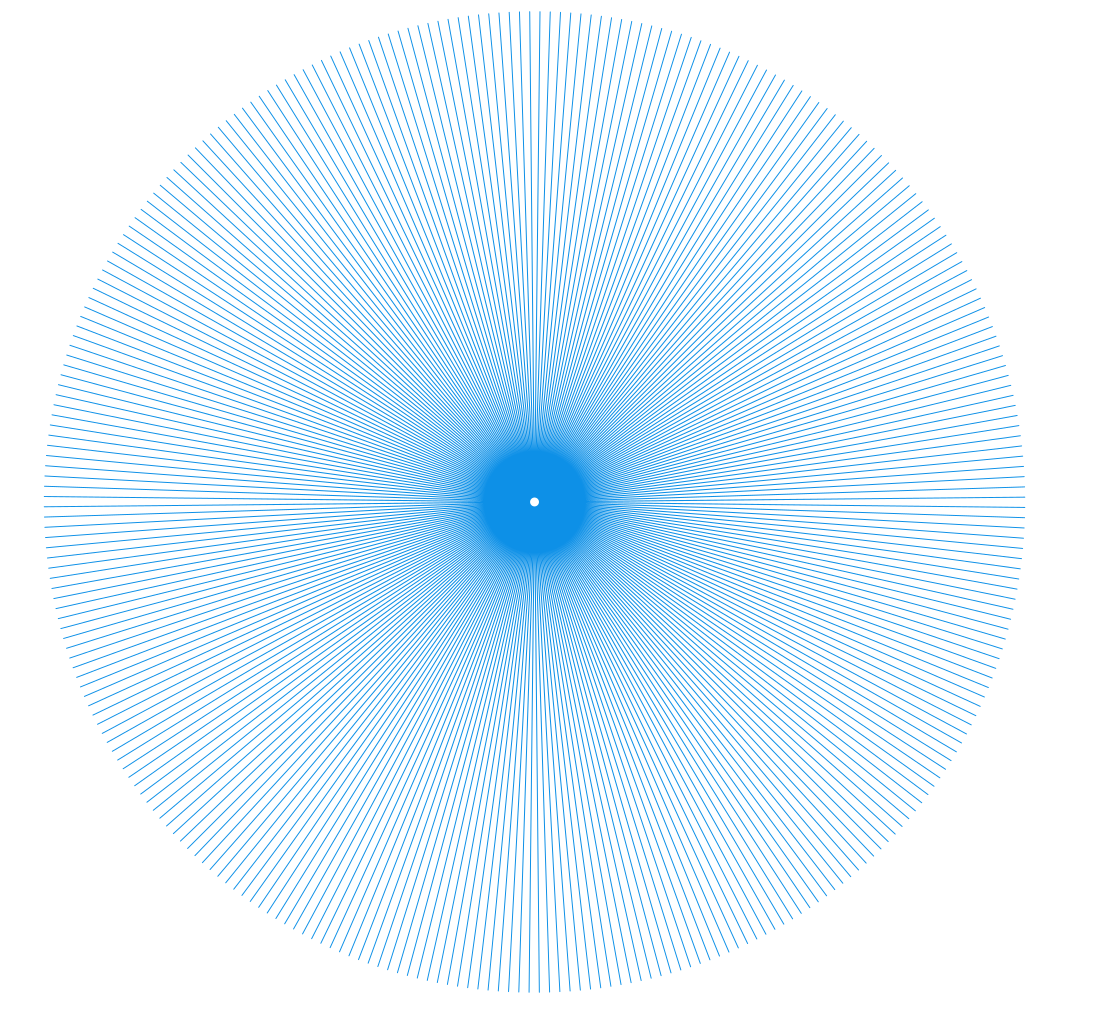 This is a 300 cusp star. The details in the area near the center are impossible to be shown in ordinary screens, so there's not much difference. Every line is actually forth and back, but the caused waste of space is fixed by having a thinner line.

The (double)lines can be separated by subtracting a circle which covers the uselessly dense area. To make the lines totally free the compound path must be released. That's done in the next images and one line (actually a triangle) is colored to purple:

BTW this is in Inkscape.