Can this geometric shape be created in Illustrator?

I am trying to think of a way to make this shape in Illustrator, is it a shape that encloses two circular gears (below is the hand drawn, non geometric shape I have now): 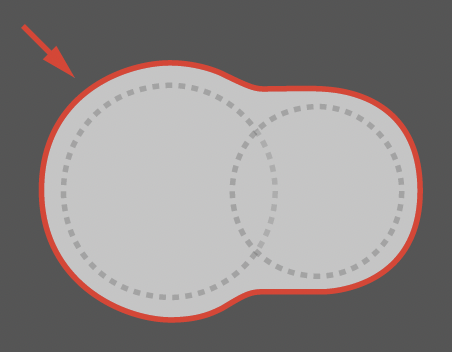 This is as far as I have gotten, but I can't seem to think of how to make the "angle" between the two circles into a rounded angle:

How can this be made in a symmetrical and geometric way?

It's not so easy to do this in Illustrator without doing some manual operations or tweaks. Scott has covered possible ways in another answer he linked to and Joojaa has provided another possible method. These are both fine obviously. However, these edits are still a bit manual.

I know you asked how to do this in Illustrator, however I think it's worth mentioning other software too. Edit The following can also be done in Illustrator using Offset path effects as was correctly pointed out by joojaa.

Anway, this is for Inkscape.

First make your interlinking circles, then duplicate them and do a boolean union operation.

Then to this add an Offset Live path effect, click and drag on the control to make it extend beyond the area you want the final outline to appear. 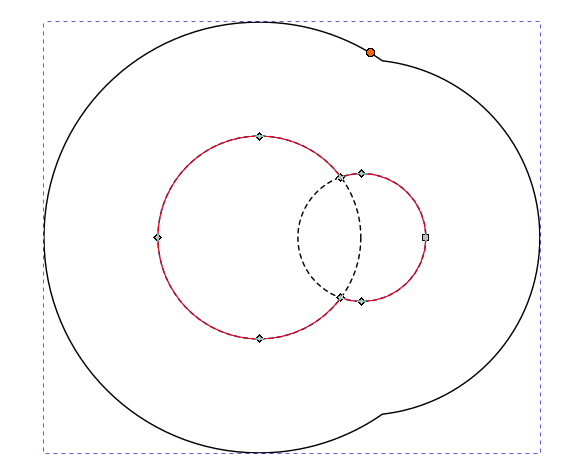 Then, add a second Offset LPE, this time set the Join to "rounded", and click and drag the control inwards to the desired size. 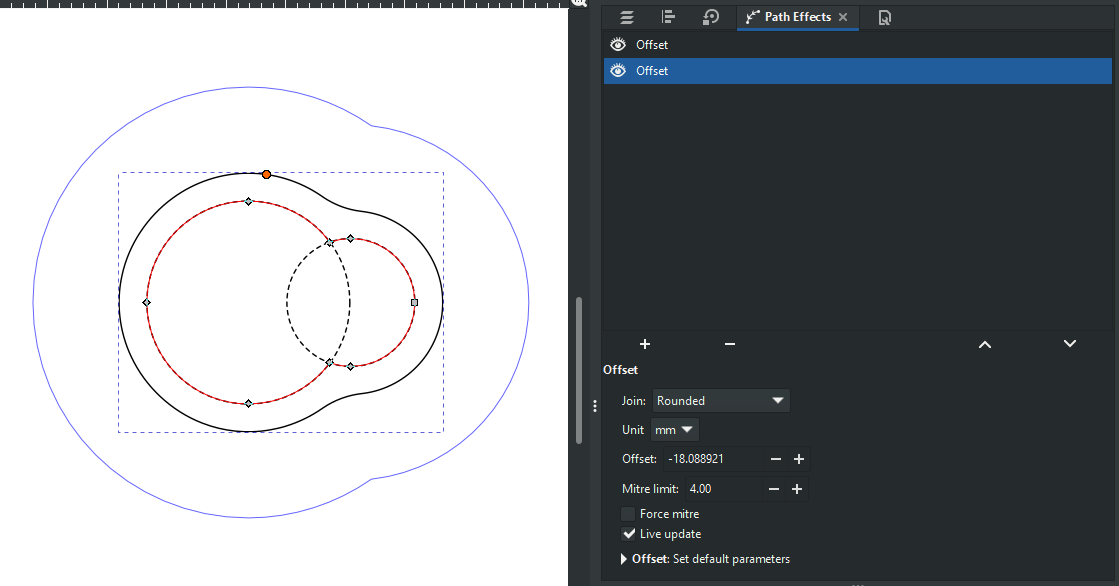 Everything is still fully editable, indeed both LPE effects are editable and you can click and drag the control points until your heart is content.

It's even possible to use a Live Path Boolean Union effects, with multiple shapes, and then you can click and drag the circles to see them interact.

Then select the compound path and create a first Offset Path:

(do not do this through the Object Menu atop the screen! It would create another type of Offset Path with an identical name but different properties and invisible in the Appearance Panel)

Then create a second Offset Path: 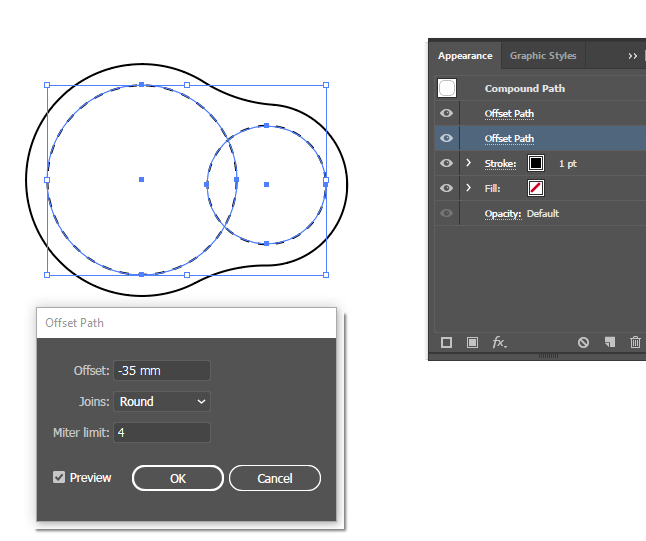 I dont really see what the problem is but maybe you have a workflow problem. Im having a incomplete pricture of what your fudamental problem is so i will roll this back to basics.

But before we begin. You should immediately stop thinking of illustrator as a application that gives you some magic tools that solves your problems. Illustrator has some functions like that, but in general you can never rely on them untill you have a lot more experience. So the first frame chage in your mind to make is to not try to do anything other then what you would do if you were drawing with pen and paper.

Now it is far better form a mechanical standpoint to draw this shape instead: 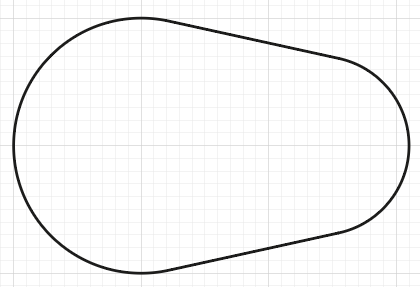 I have been using Metaball-Arc and Metaball scripts by Hiroyuki Sato for years and love them. I would suggest trying out these scripts if you haven't already. They work very well and are much easier than the alternative solutions I have seen.

To use the script, do the following:

The questioner wanted "a geometric way" solution instead of eyeballing. Unfortunately the problem is loosely defined.See the next image: 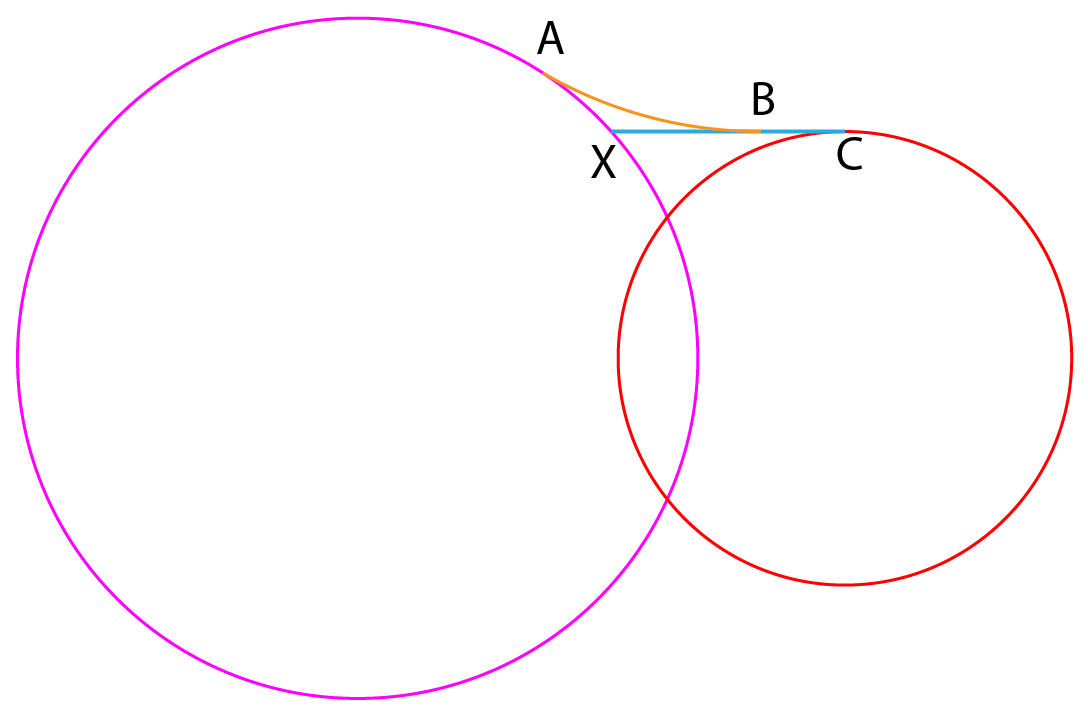 The question contains 2 circles on the same Y-coordinate - the purple one and the red one in my illustration. Then there's a horizontal line (blue) from the top point C of the red circle to the purple circle point X.

The questioner seems to want a curve AB (orange) between the purple circle and the line CX so that the curve is tangential with the purple circle in A and with the line in point B somewhere between C and X. The places of A and B were not defined and the exact wanted type of curve AB is also undefined.

There's already an answer which suggests rounding corner X with the corner widget. Tangency points A and B will take their places as the widget wants and depending on what's the rounding radius. Actually there's only one possible circular arc and point pair AB if the radius of the arc is given beforehand. In legacy Illustrator and freeware the arc can be constructed exactly also without the corner widget. One can use elementary geometry, but that's tricky when compared to the corner widget.

Another approach is to draw manually a 2 node Bezier curve with the pen. The tangency is not a problem. One can turn the handles on the tangent lines. The tangent line in point A can be got by rotating 90 degrees a radius of the purple circle. Points A and B can be selected freely because AB will be a Bezier curve, not an arc: 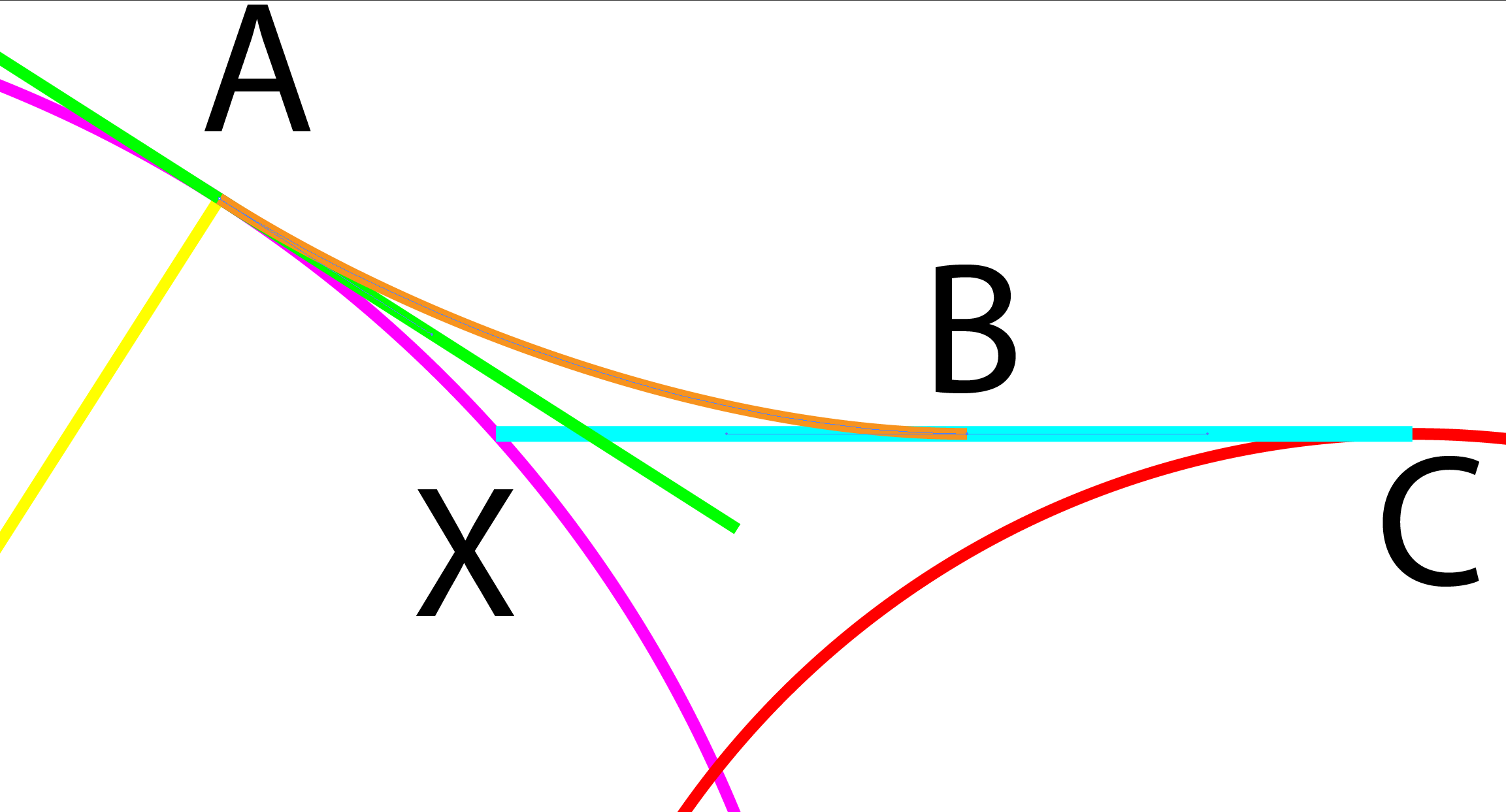 Point A was selected arbitarily. A new anchor was inserted to it on the circle. The yellow radius and its 90 degrees rotated copy (green) were drawn to A. The yellow curve was drawn with the pen by dragging the handles along the green line and line XC (=cyan to allow the handles to be seen). The handles snap during the drawing if one has Smart Guides and Snap to Point ON, no other snaps!

I'm afraid this is not what's wanted. The tangency is achieved, but the result has too much variation possibilities which essentially is the same as the questioner has already tried.

The 3rd idea is to declare that AB is a circular arc, but its endpoint B is decided beforehand. It can be anywhere between X and C, even the same as point C. The next image is used to describe the construction: 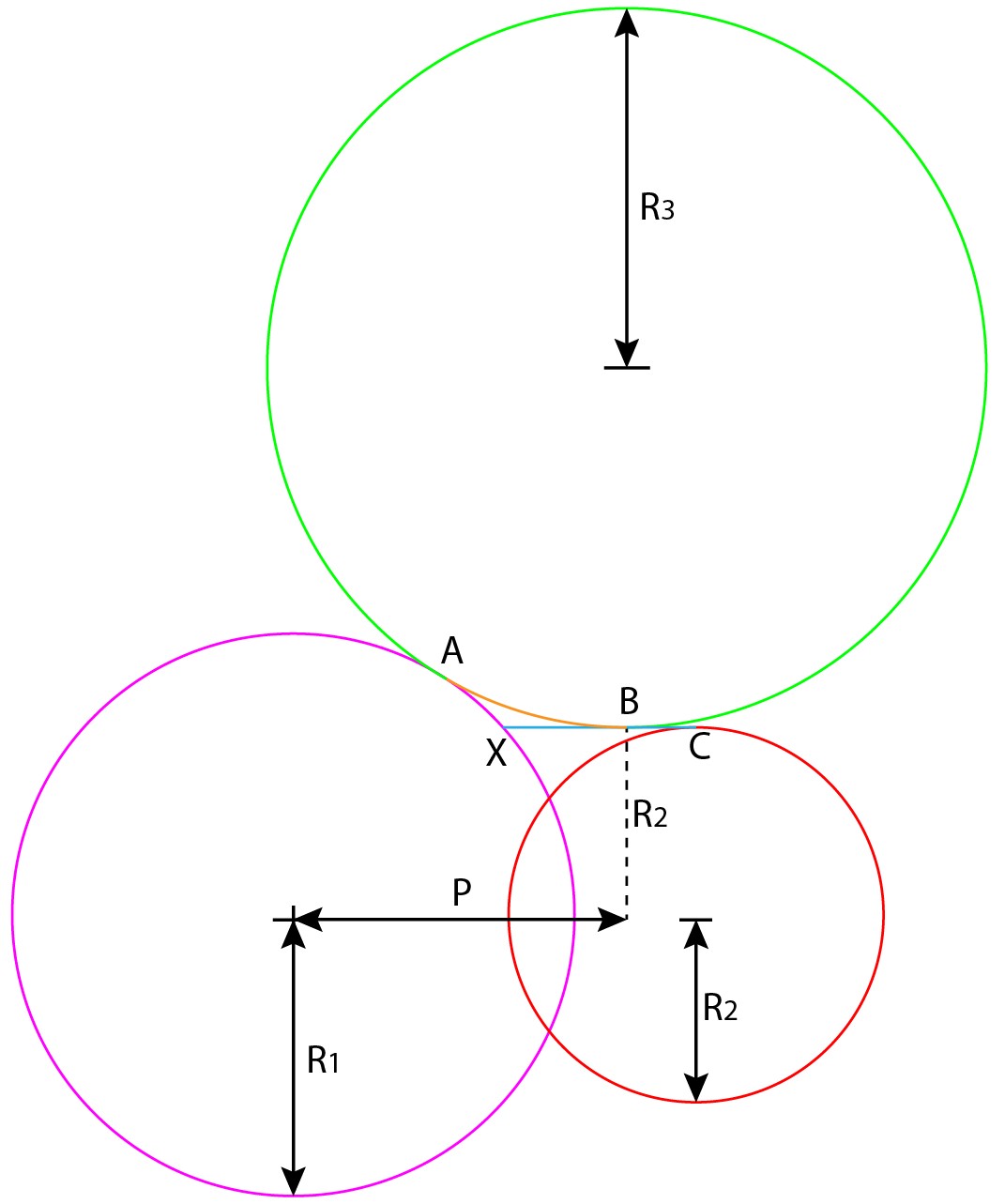 The horizontal distance between point B and the center of the purple circle is declared to be = P.

If P and the radiuses R1 and R2 are known as numbers one can calculate the radius of the arc (=R3) from the Pythagorean triangle equation. Then it can be used with the corner widget or as well to draw the wanted arc (actually the full circle) as a plane geometry construction.

The rectangular triangle to be used is the cyan one in the next image: 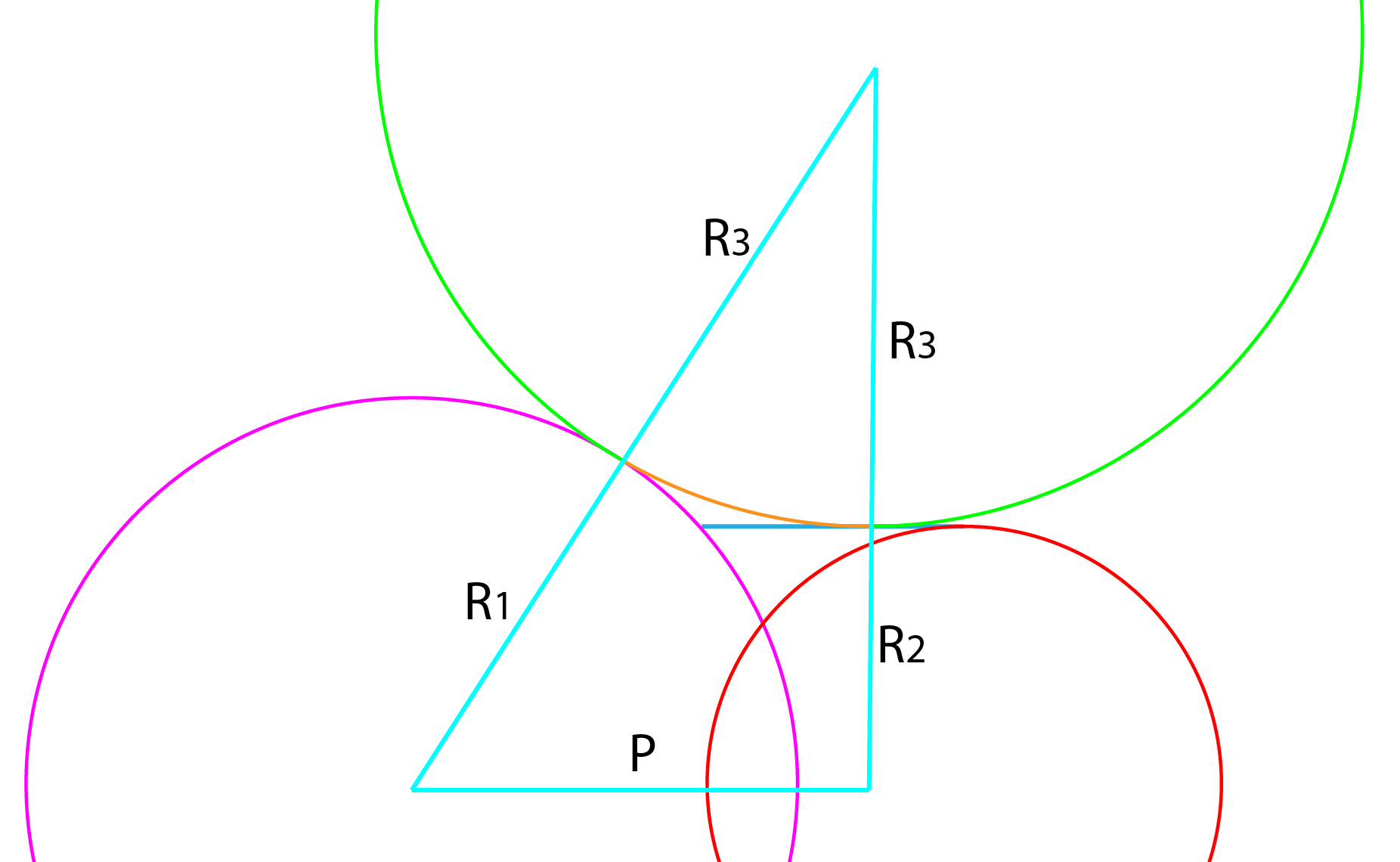 The Pythagorean theorem binds together P and the radiuses. The starting equation and the solved arc radius R3 are shown in the next image: 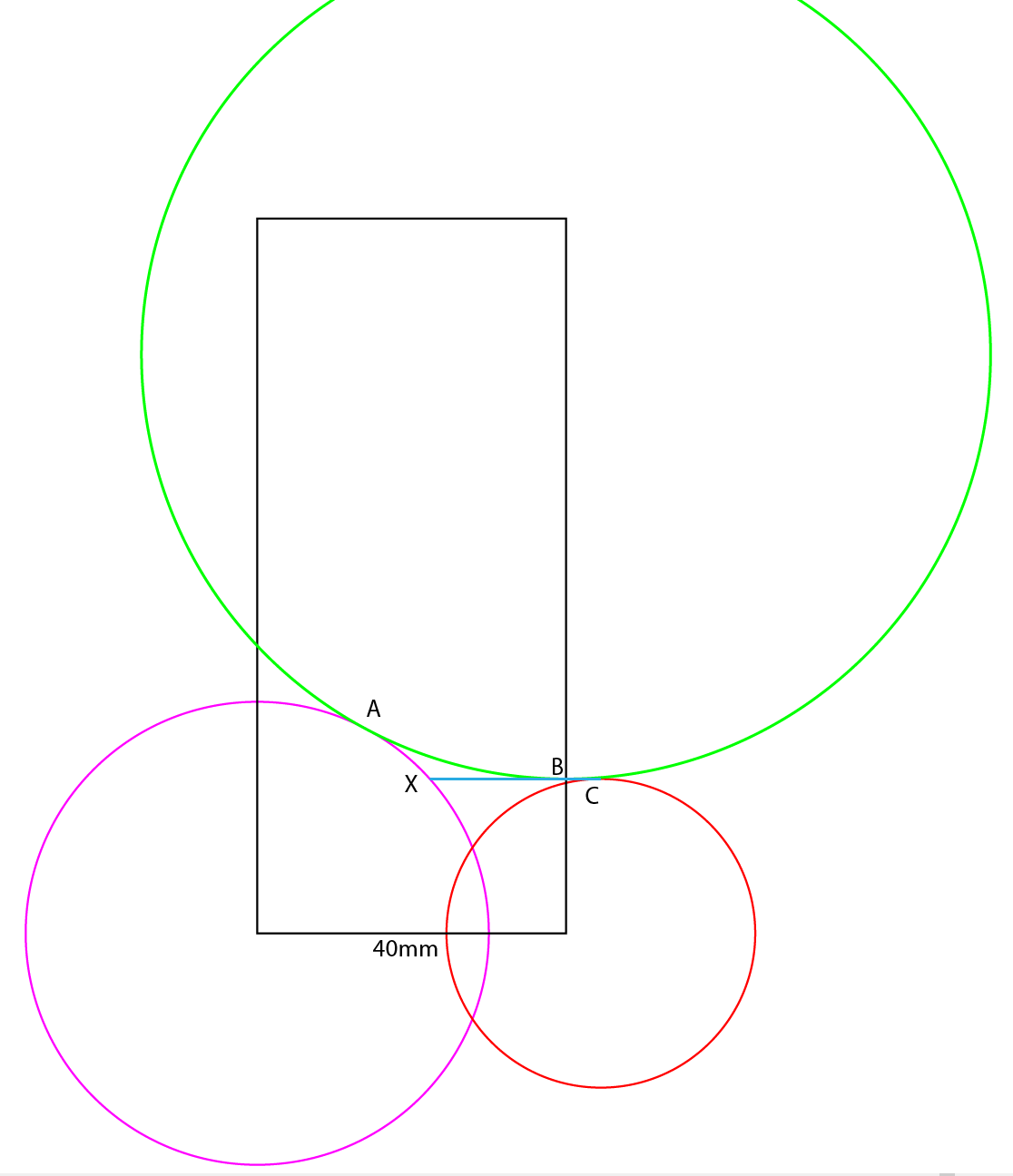 One can stretch the rectangle downwards, draw the copies of the circle and the line XC also to the bottom side and collect the final shape with the Shape Builder tool. The result: 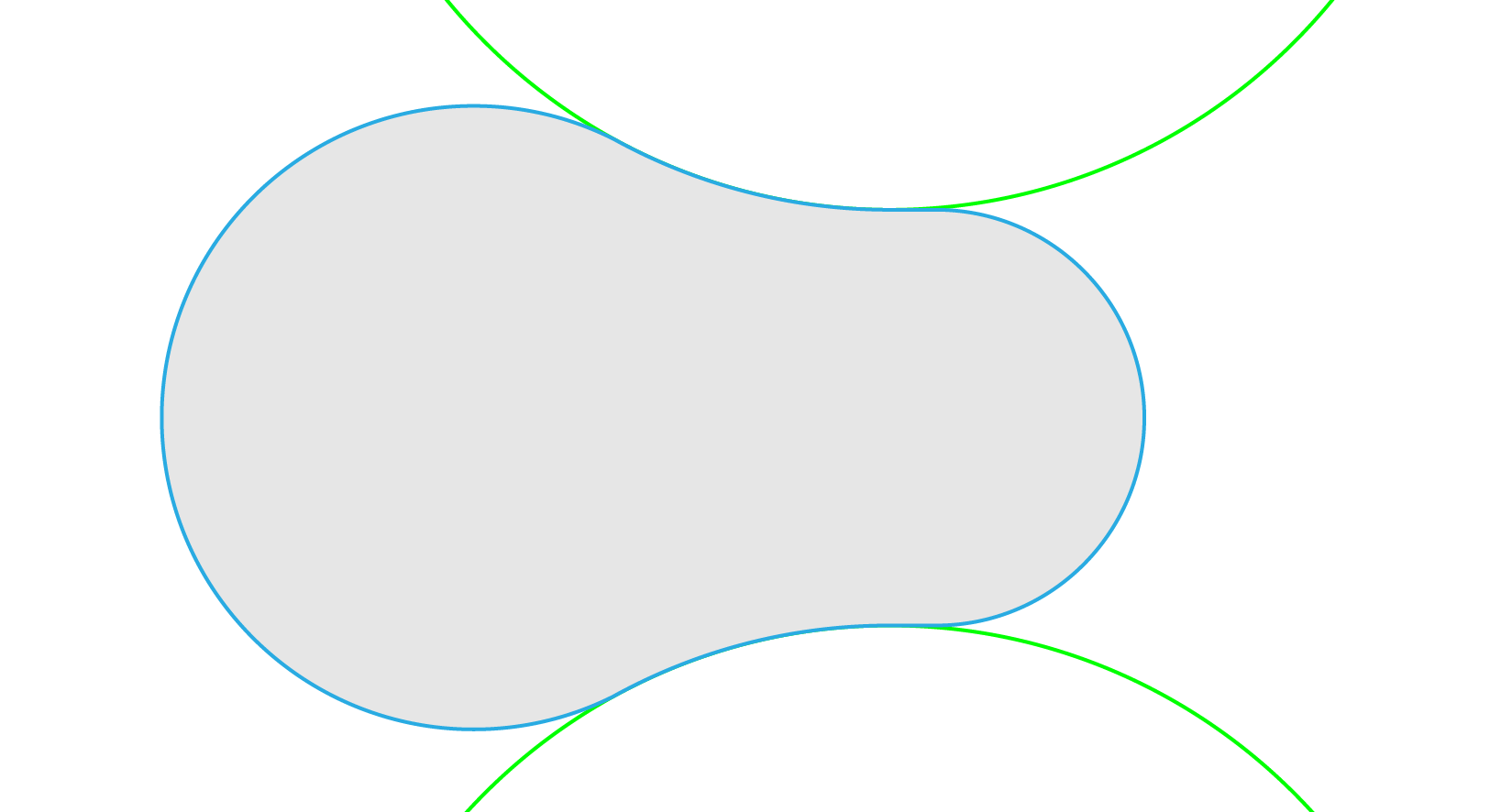 NOTE: The placement and the size of the green circle does not depend on how far to the right the red circle was placed from the center of the purple circle. As said point B can well be the same as C. Here's a small horizontal zone left between B and C.

The 4th idea is to show that my former clause "freeware doesn't have a corner widget" was false. A free CAD program DesignSpark Mechanical has it. It has recently got also constraint based sketching which also could be used, but the corner rounding tool is enough for this job.

Here's a horizontal line and 2 circles on it. The grid snapping is not used, so the items are not aligned with the grid. But the drawn parts snap to each other. The horizontal lines are inserted to the top and bottom of the smaller circle. The vertical line is the wanted ending of the forthcoming rounding. 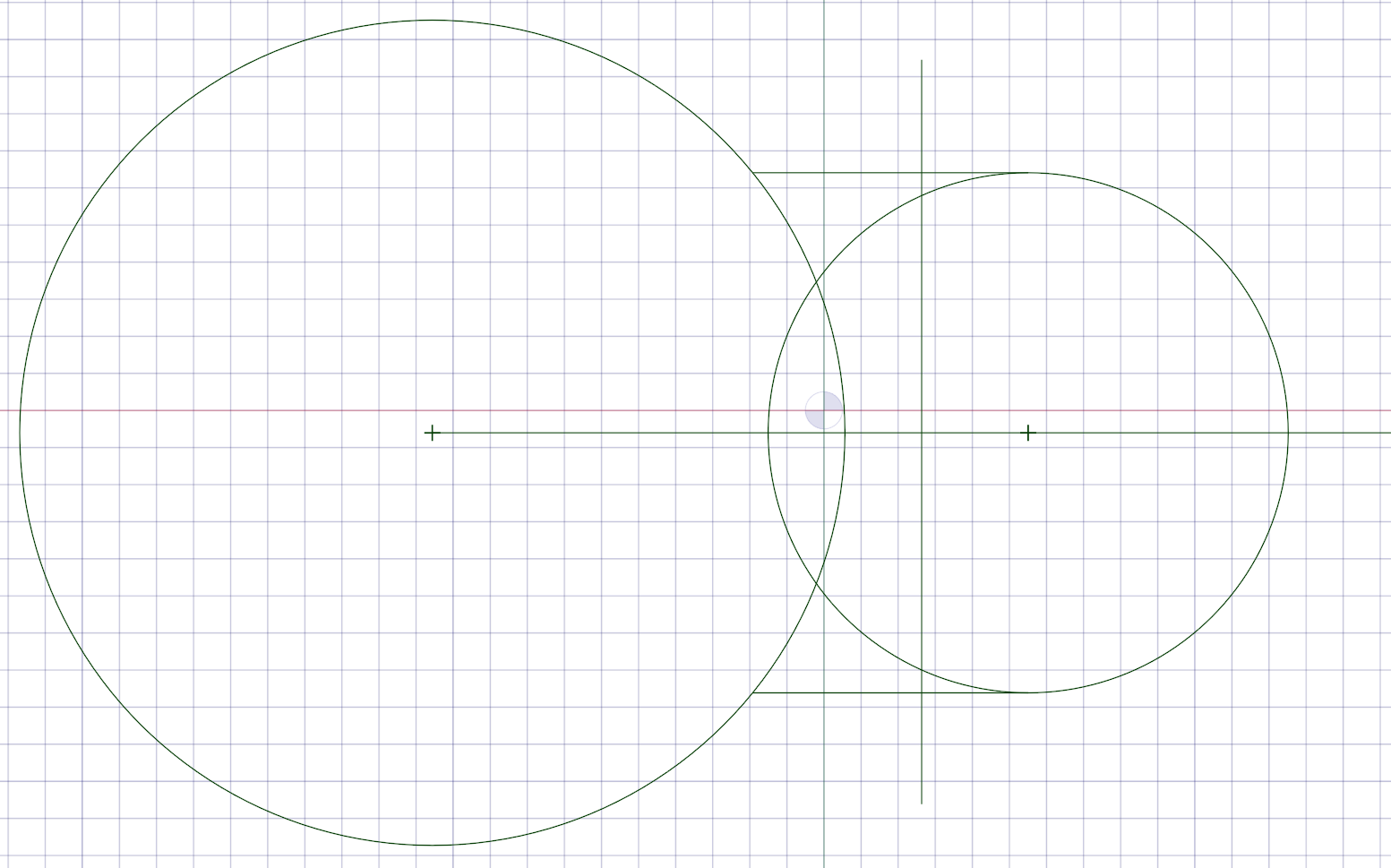 The rounding tool is applied. One clicks to the big circle and the wanted ending point of the rounding. The old lines vanish automatically; they are rounded: 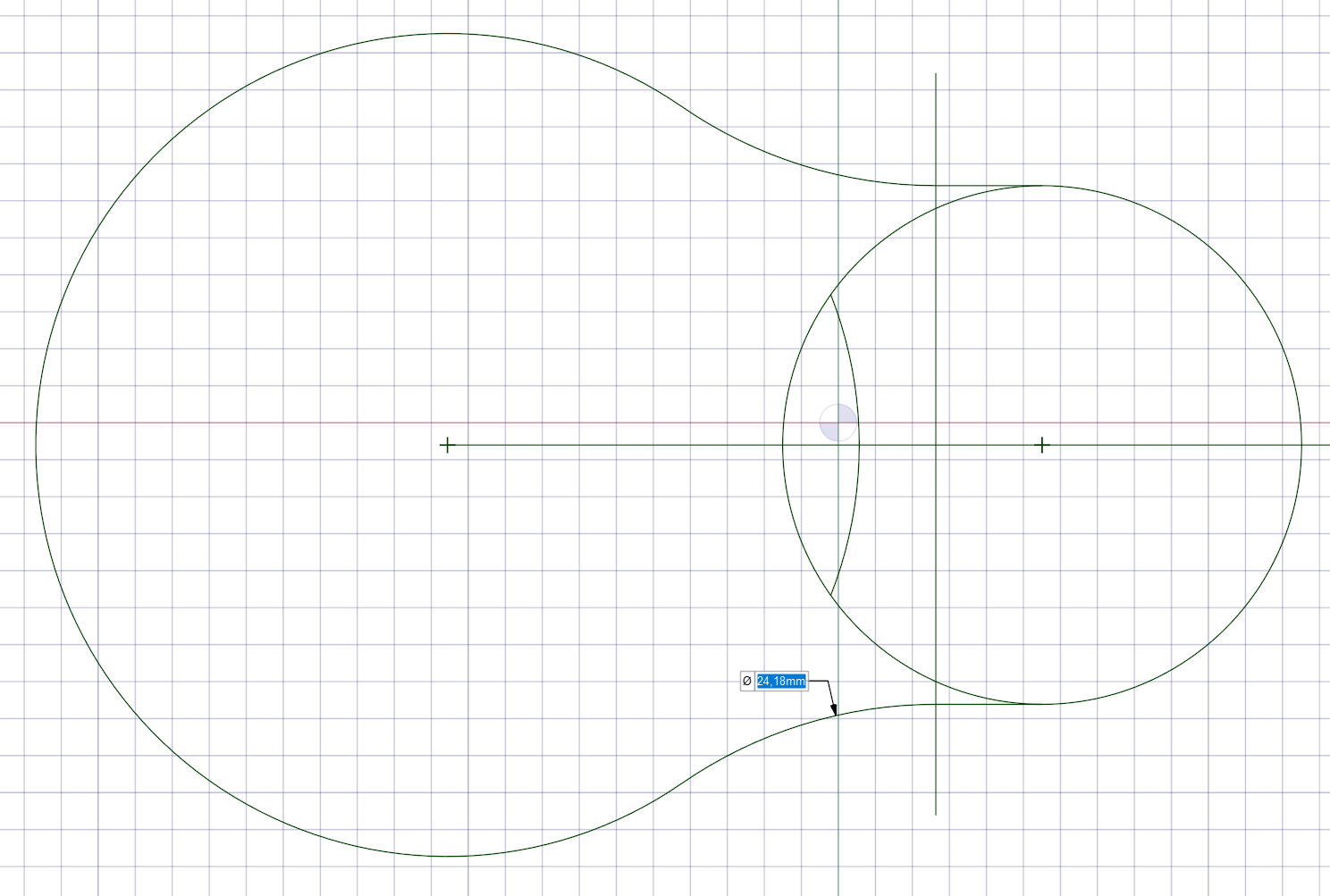 One can wipe off the unnecessary splinters with the trim tool: 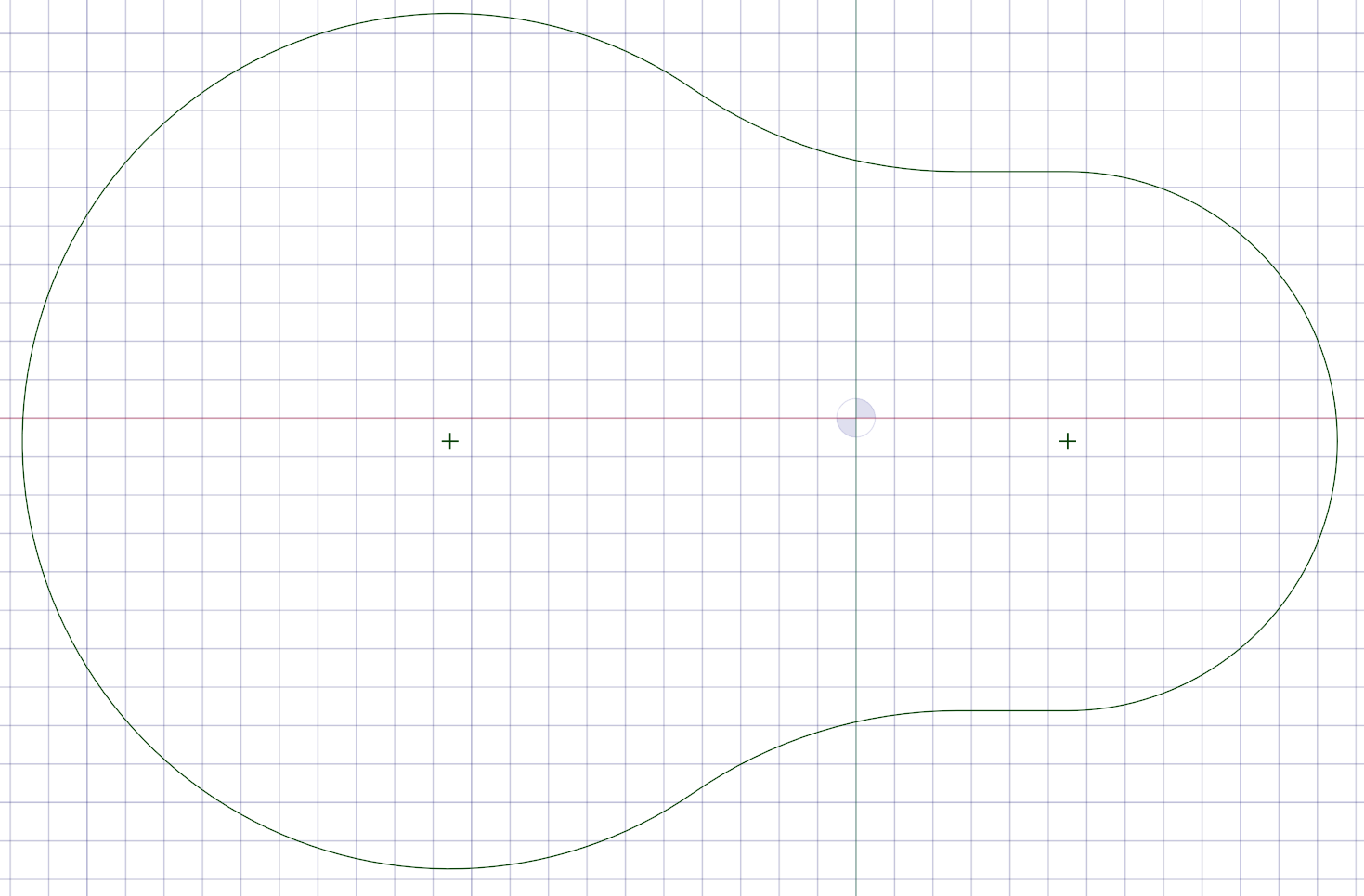 The program is freeware. It has limitations which can be removed by paying. One of them is exporting drawings. But as a workaround one can print the scene as PDF and open the image as vector in Illustrator for color and line type selection.

BTW. Although limited, the program still is a CAD program with very useful 3D capabilities. I would try to draw there as much as possible of the job.

Not the answer you're looking for? Browse other questions tagged adobe-illustrator shapes workflow or ask your own question.

0
How to do the shape borders like this in the image attached
24
How do I draw a heart shape in inkscape?
1
Adobe Illustrator - Merging Objects and Deleting the Area Inbetween
1
Scalable spherocylinder in Illustrator
37
Is there a specific name for this square with two corners sharp and two corners rounded?
25
What is this shape that looks like a rectangle with rounded ends called?
0
How do I create this funky B shape
3
How can I make this shape in illustrator? (without pen tool if possible)
5
How to make the perfect pizza shape from a circle using the pen tool?