How can I vectorize pixelation effects in Illustrator?

I'm working with some vector text in Illustrator and have been playing around with the Pixelate effects in the effects panel (which are under the "Photoshop effects" category). I'd like to vectorize this now-pixelated text, however, rasterizing the effects and then using "image trace" doesn't really work.

Is there an easy way to turn the pixelated preview into paths?

A different approach, not using an Effect.

Type some text, say around 70pt

Then do Object > Rasterize. In the resolution select "Other", and set the ppi to something like 30ppi, and anti-aliasing set to "None". This will give you a nice pixelated text image, but the raster image itself will be a tiny low resolution image, and so it won't trace very well. 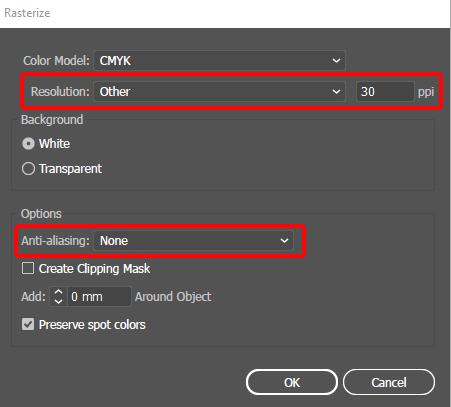 To fix the low resolution problem, do Object > Rasterize for a second time, but this time set the resolution to 300ppi. This will resample the image to make it much larger in pixels.

Hit the Image Trace button, open up the Image trace settings, leave everything as default, but under Advanced set the "Ignore White" option. Hit the Expand button.

The result has no wonky lines/curves.

5
Converting marker and watercolor art to Illustrator/Vector?
0
Importing photos from Illustrator into After Effects
0
When is it worth it to vectorize an image for printing?
5
How would one achive this black and white glitch-ish text effect in photoshop or illustrator?
0
How to view a list of all effects/transforms/blends active on current Illustrator/Photoshop Selection
0
Adobe Illustrator arced text gets distorted after rotating
0
Trim Extraneous Lines in Illustrator
0
Why does "Ignore White" de-select itself in Adobe Illustrator Image Trace?
0
Illustrator - Converting Transform Effect reflections into actual paths