How to make it look like the text is sitting on the background rather than floating?

I'm trying to make text look like its sitting on a background, but still have the shadow to denote the bevel of the text.

I can't figure out what to do with the shadow in Photoshop to make it look like this.

I have tried multiple shadows, but all looks like its floating. 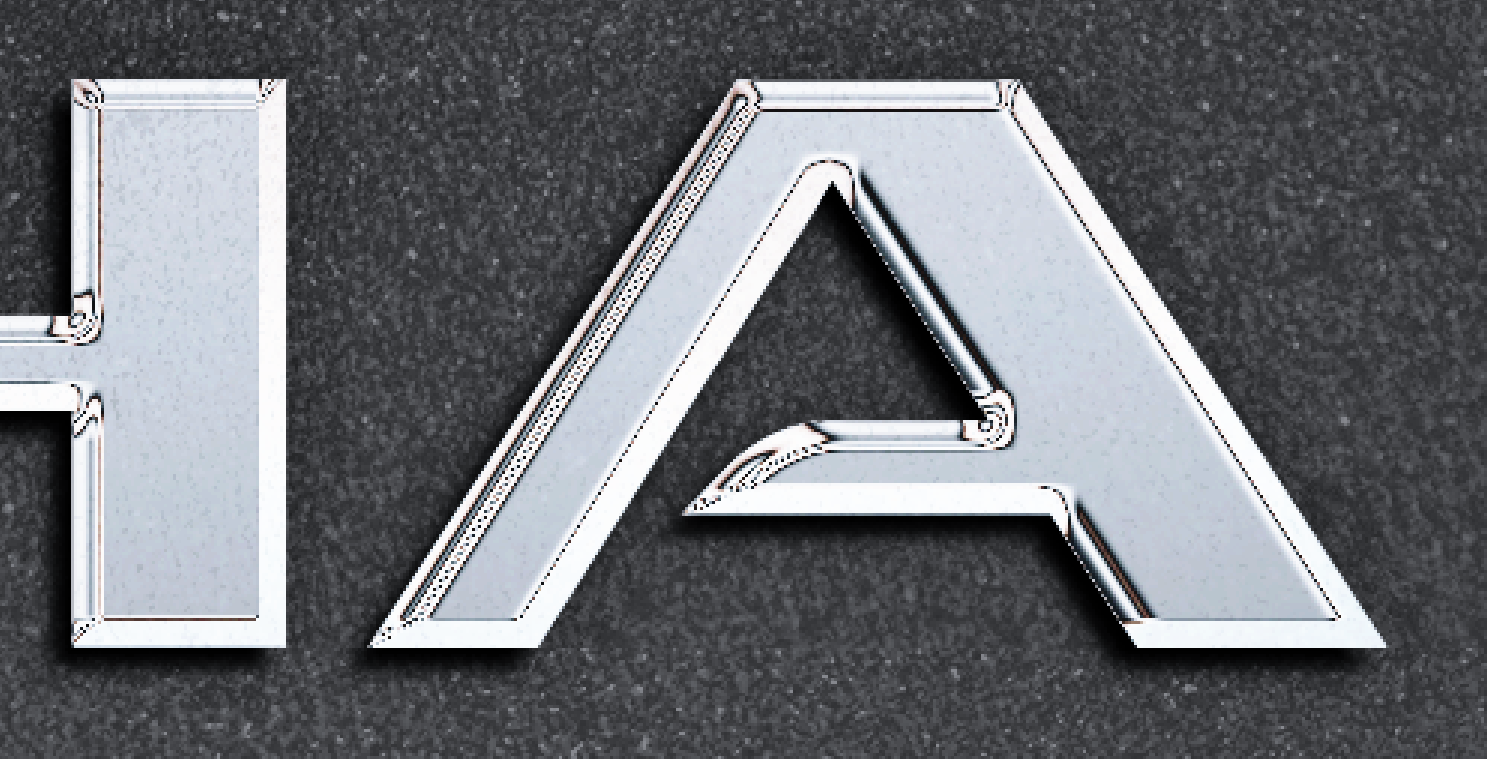 adobe-photoshop shadows drop-shadow
Share
Improve this question
asked May 30 at 12:11

A drop shadow is never going to convey the type sitting on any surface. Not ever. Drop shadows inherently convey depth of field.

You need more of a cast shadow and Photoshop doesn't have a Layer Style for cast shadows. You have to create them yourself.

In addition, if the "chrome" is sitting on the texture, light would reflect off of the chrome causing the texture to be lit slightly around the characters.

This is just my hobbling something together. But in short 3 separate layers with varying effects and transformations to create some specific elements: 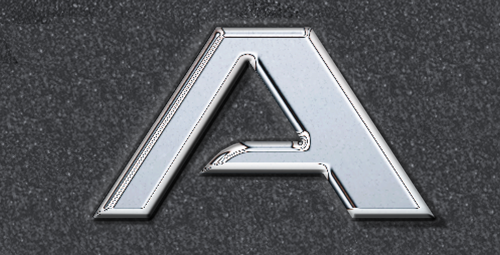 Note how the cast shadow is not even around the glyph. It's been transformed to be inconsistent and convey lighting direction.

This is rather quick and dirty just breaking apart the png in the question, then masking etc. to get pieces to work with. Then show the overall goal as I see it. This would absolutely need refinement before any production in most instances.

Layer style on the white layer... 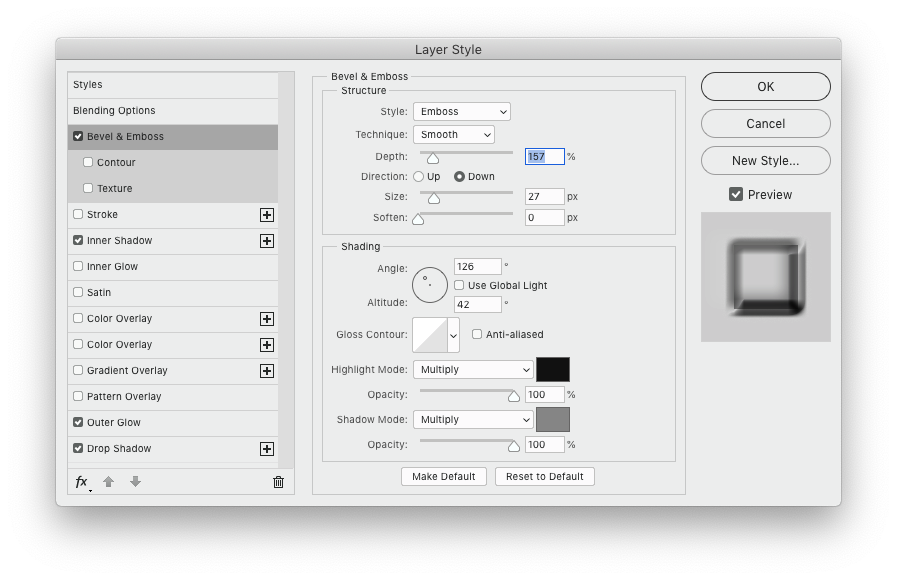 Bevel and Emboss set to Emboss to add shadows outside the glyph on the textured background. 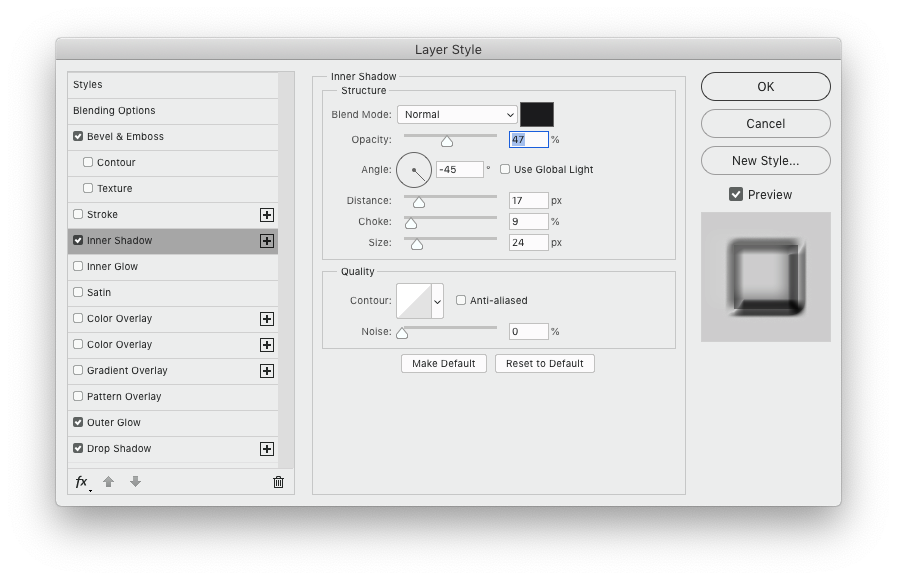 Inner Shadow is used to add a slight darkening on the glyph itself to further convey a light direction. 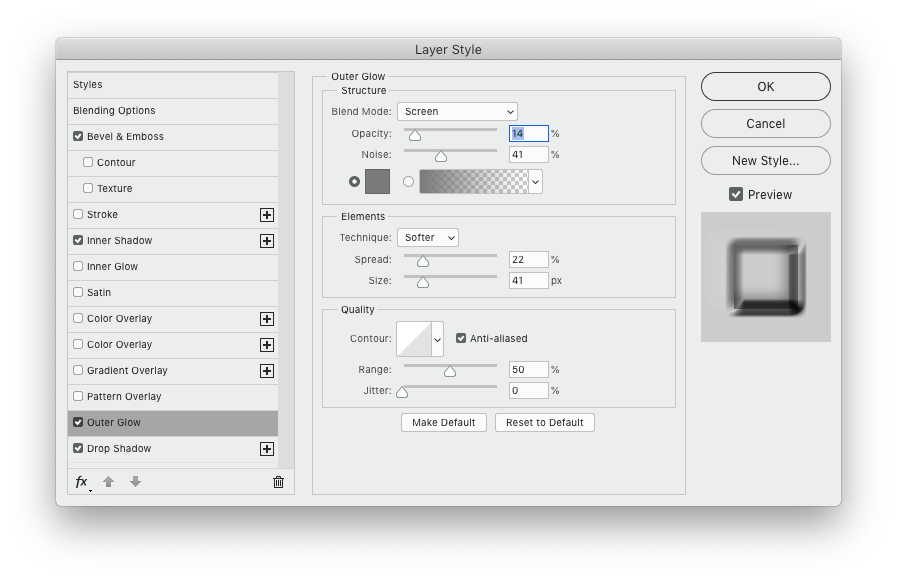 Outer Glow is used to add a slight brightening to the area around the glyph. Note the extra Noise added to emphasize the texture. 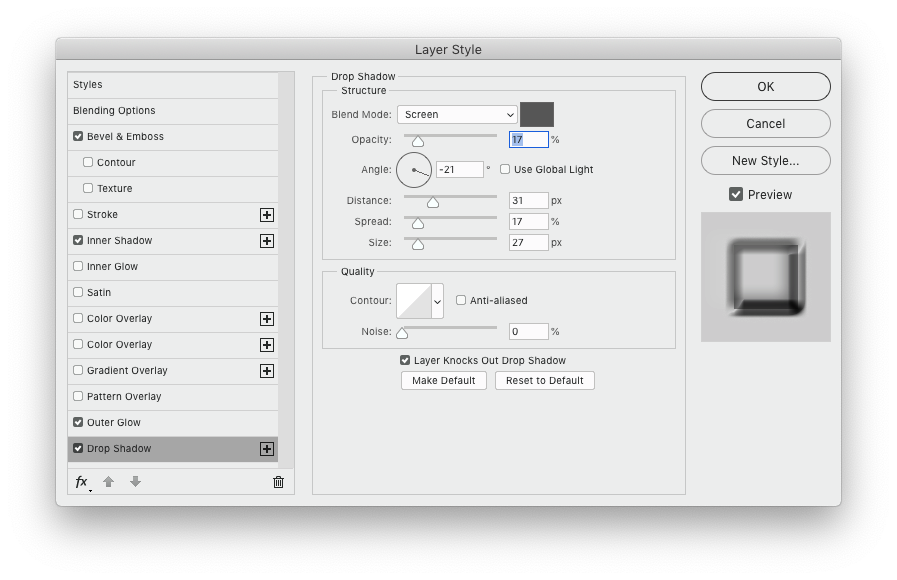 Although it's a "Drop Shadow it's used to boost the reflective lighting on the texture. This isn't actually used as a "shadow". It's far more of a highlight on the texture.

One possibility to make it like it's somehow connected to the background surface is to let it be in a dent: 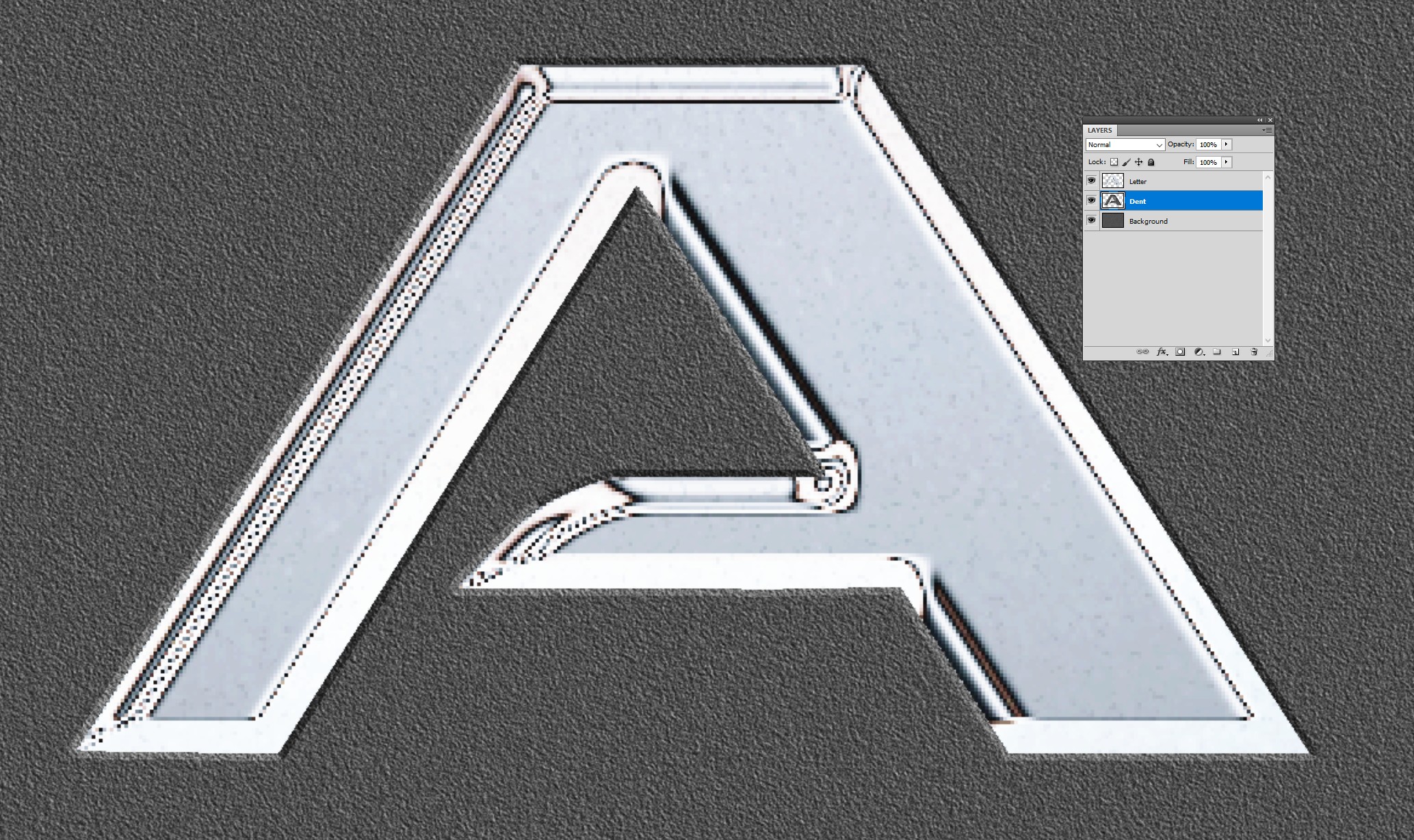 This one is made by making a little larger copy of the background than the letter and darkening and lightening (manually) slices of it.

A part of your mismatch is the different sharpnesses of the letters and the background. As a workaround I built my own BG from embossed noise.

Someone may see the dent above as a bad joke. As an alternate approach I offer a subtle shadow on the letters (not on the BG). As an idea, also it is a dent, but one with vertical edges. It works because my BG is sharp. 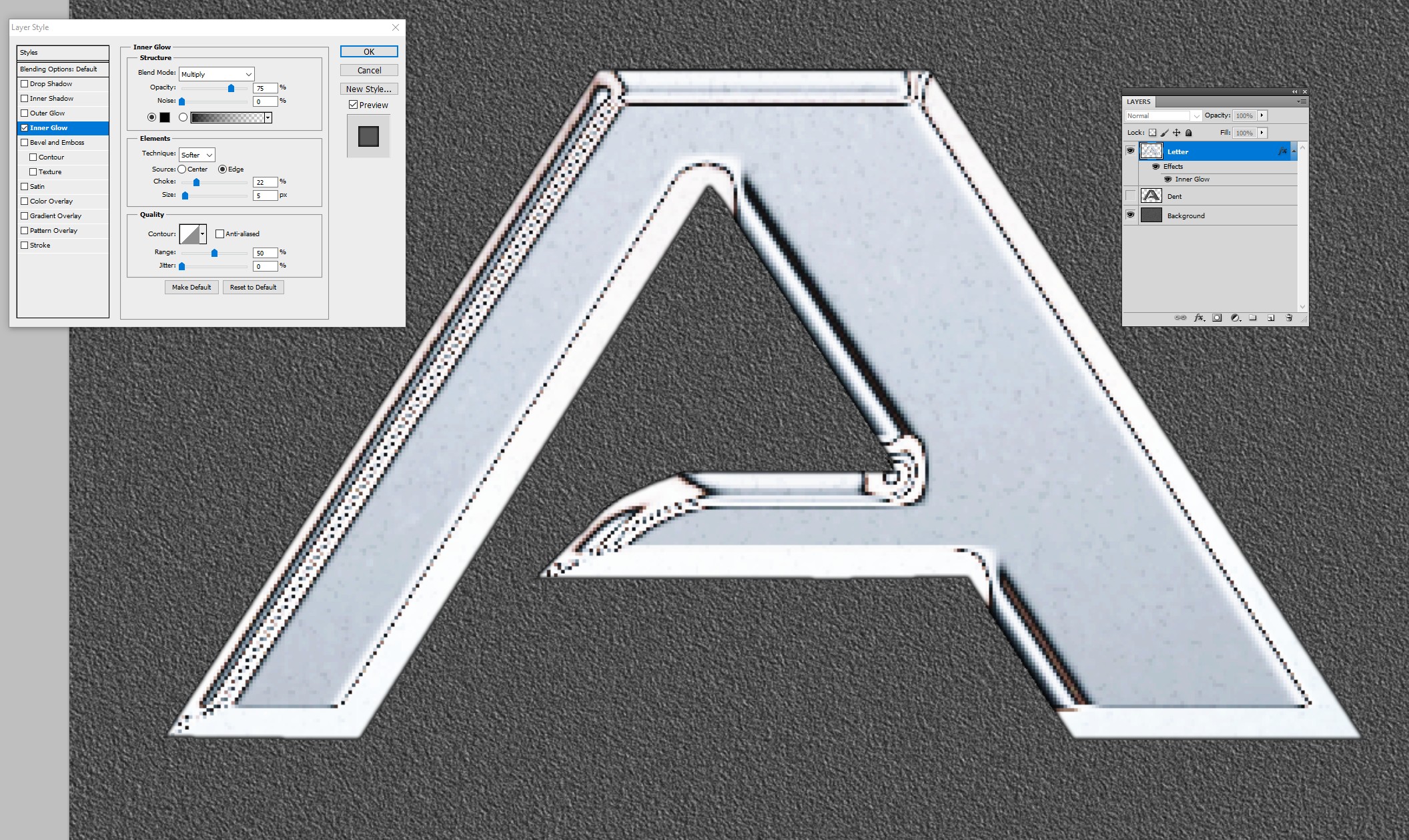 The shadow is black inner glow to make it same on all edges.

The dent can be made more subtle by feathering its outer edges. The next version has both the shadow and the feathered dent: 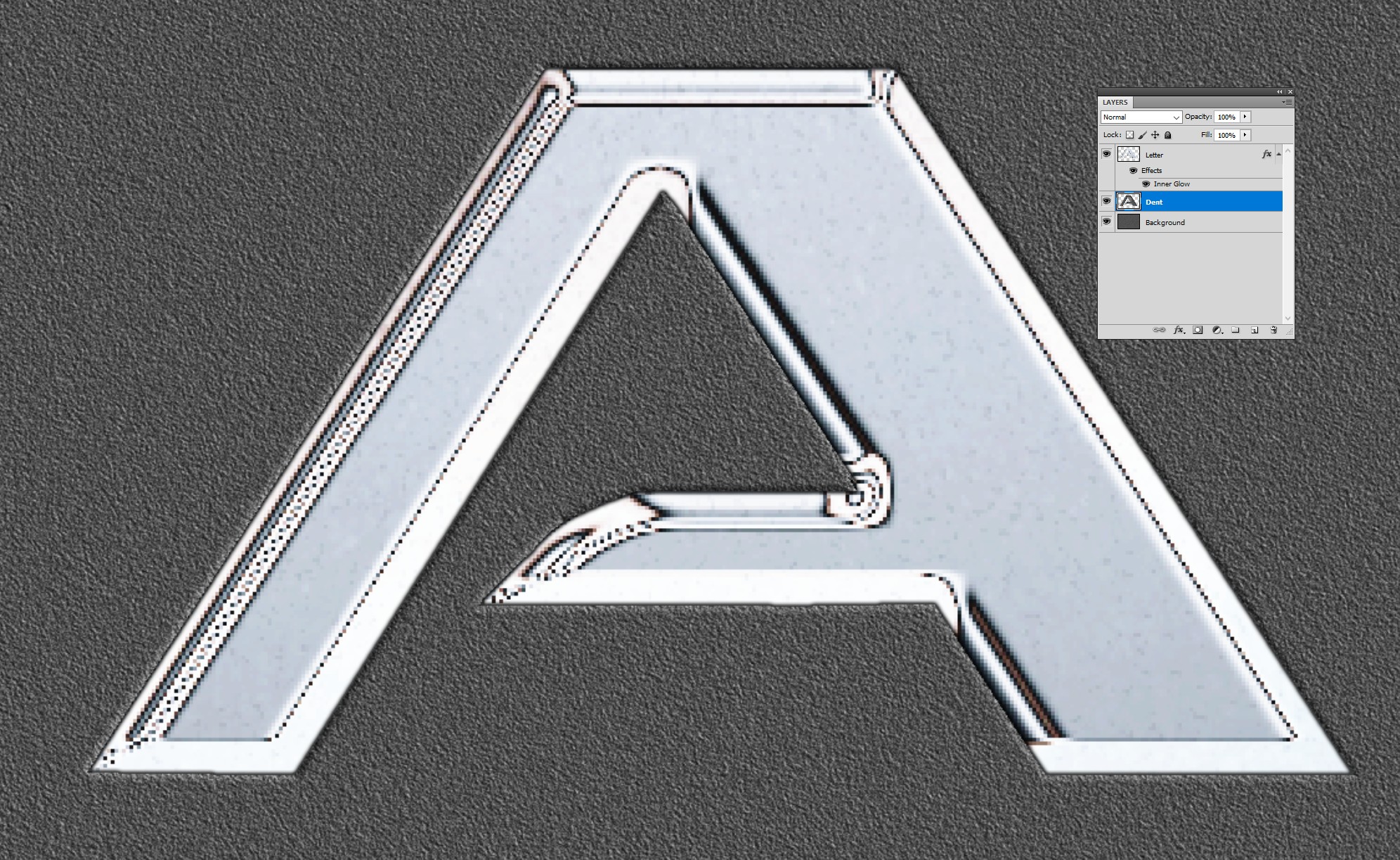 I looked at images of beveled/embossed type with shadows. Keep in mind I'm no expert in cast shadows - but what I noticed is the shadows were extending onto the type. So the shadows didn't start on the type but somewhat cascaded off of the type to also emphasize the height of the bevel.Here's a quick sample of what i tried: 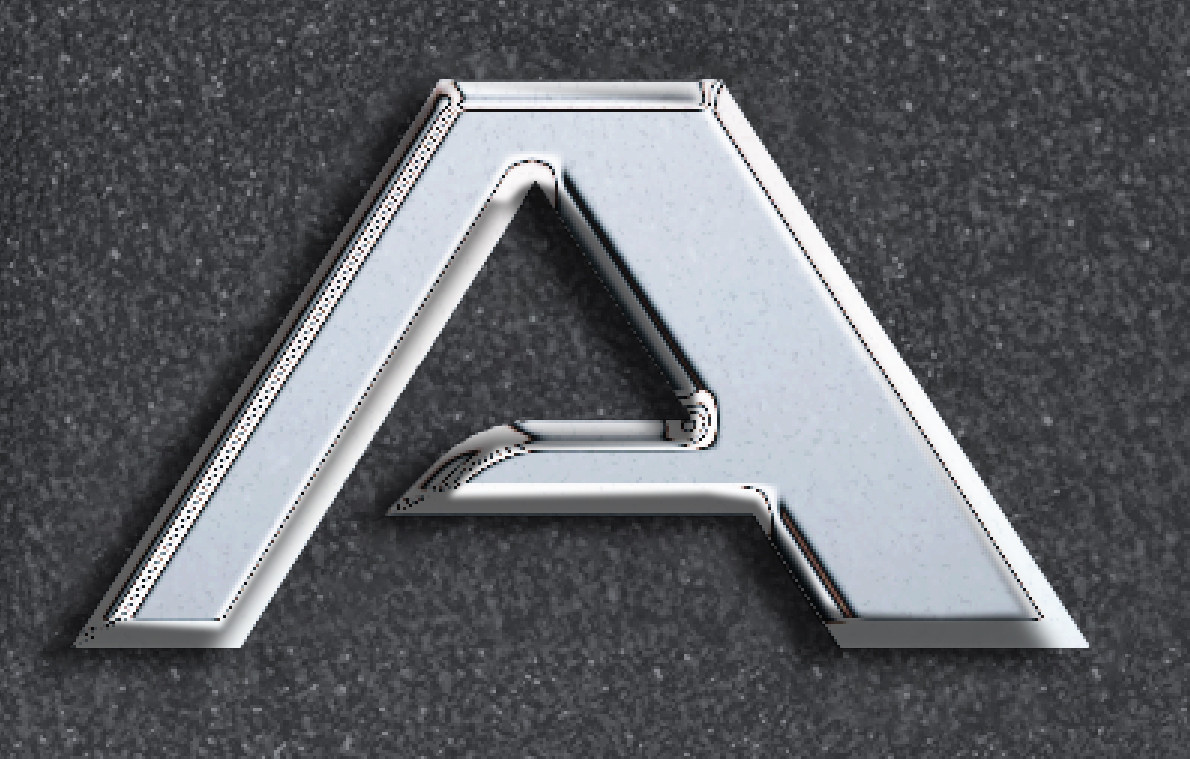 Possibly this might help to reduce the floating effect...

Not the answer you're looking for? Browse other questions tagged adobe-photoshop shadows drop-shadow or ask your own question.

2
How can I make this bevel and emboss effect look deeper
1
How to make this shadow in Photoshop for object which lifts high enough to allow light to pass through in one area?
3
How to create a shadow like this corel?
0
How Would I achive this line effect in Photoshop
5
Make text look like it's part of icon
0
How to make the confetti background frame like this?
3
Can I achieve shadows like this using layer styles?
0
How to extract the shadows from this image and make the white transparent?
1
How to make the background of an image with shadows blend in
2
How to make vector look like ink?