Not sure if this is a valid question. I am trying to animate this fan in Adobe Animate. I have the blades and the base setup. Trying to do a frame animation I just don't know where to start, how to make the blades looks like they are spinning from this angle. Anyone has a rough sketch idea on how to make this fan spin?

Any help would be appreciated, thank you!

I don't know Adobe Animate but if you can animate each blade's corners individually, you might want to change their positions on a fixed interval. More the number of iterations/frames, the more smooth will be illusion of spinning fan: 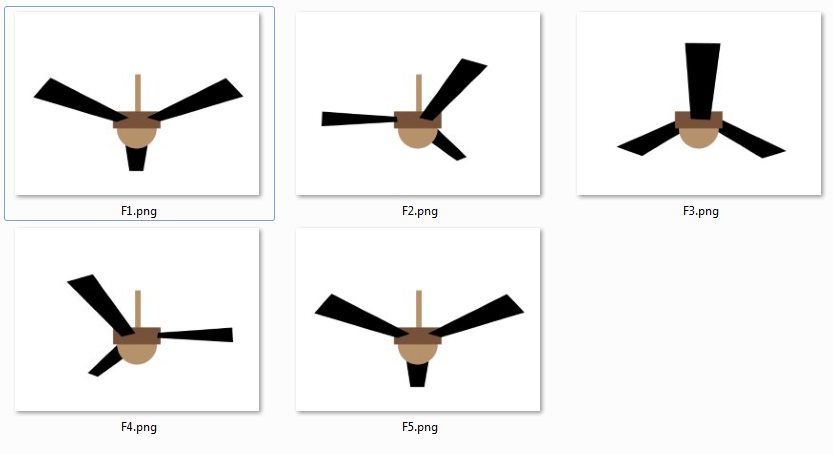 You don't have to draw 4 different fan stages. You can animate same 3 blades corners all the time. However, if you want different illustrations/drawings and you want to animate them like a GIF, you can. It's up to you.

I'm not an user of Adobe Animate, but it has the tool for rotating planar objects. Use it if you can accept the propeller looks flat which in reality cannot move the air. Rotating it fast enough so that the motion looks chaotic (due the limited frame rate) hides the inaccuracy of geometry and projection, but surely creates the wanted illusion if there's enough context to make clear that it's a ceiling fan.

A plausible and smooth slow motion needs several frames between two equal positions after every 120 degrees rotation. The projection must be right. It's easy to make a simple 3D model, rotate it and take 2D snapshots. They can be used as is or one can only take the key points of the geometry from them and draw his own blades.

The viewing direction and the strength of the perspective can be selected freely as the 3D program allows.

Drawing the shown simple 3D model is not a bigger effort than drawing your 2D fan image assuming one starts from zero knowledge and uses an entry level 3D program, not anything like Blender, Maya etc...

If one needs only key points to guide his own blade drawing even Illustrator's 3D extrude can make good enough 3D model which is easy to rotate to get the intermediate versions between 2 equal 120 degrees position.

Not the answer you're looking for? Browse other questions tagged animation adobe-animate animate or ask your own question.

2
Rotate position with Photoshop animate
1
How can I make a transparent PNG object spin from the center in Photoshop for a gif if the object is not a square
3
How to add a stroke property or animate the fill path of an svg?
3
Help animating a character
1
Animation (Adobe After Effects): Text rotating around object with proper "3-dimensional" perspective
1
Adobe After Effects: Smooth, believable animation of objects jumping and falling
0
New to Adobe Animate. Trying to make a frame by frame explosion. Need help
3
Can anyone suggest a program I can use to make a simple animation?
0
Use clipping mask to fill transparent shape in photoshop