How do I find a cone of vision not located on the horizon line?

In Scott Robertson's How to Draw, he briefly explains to the reader what happens when a person (acting as the station point in this situation) tilts their head up and down, while viewing the same object.

"When the head is tilted, the Line of Sight, Cone of Vision and Picture Plane move in tandem . In a linear perspective there will be 3-point perspective. Notice the verticals starting to converge. Then take a look at the height line! The line corresponding to viewing height is still on the Horizon Line, but the Horizon Line now has moved relative to the Cone of Vision and is not splitting it in half as it did when the Line of Sight was parallel to the ground" (page 27) 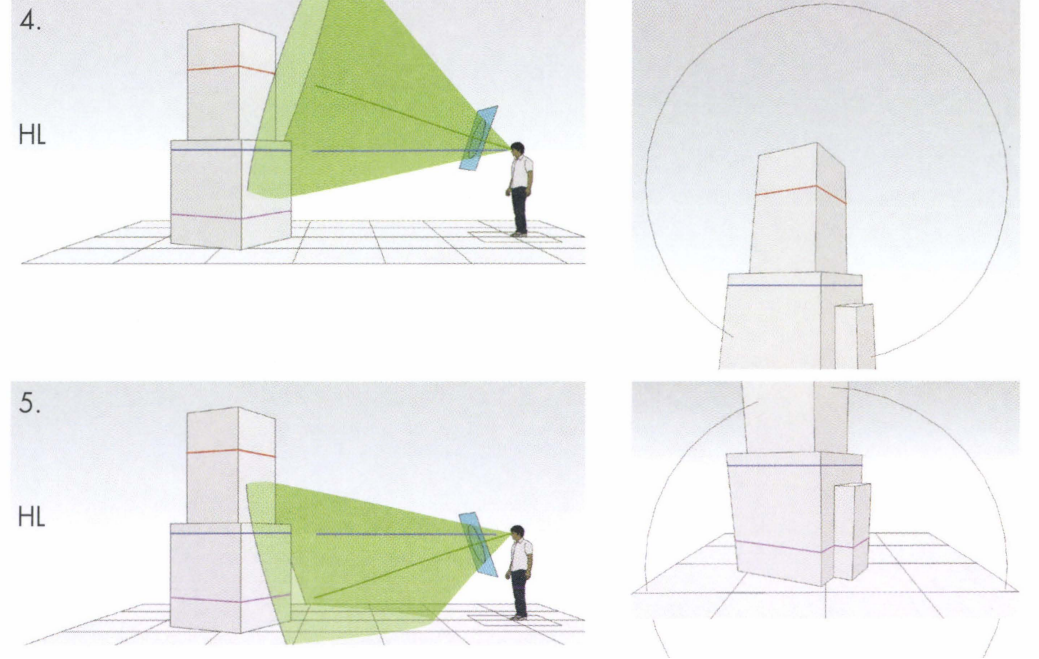 I already know how to place and use a cone of vision on the horizon line, such as in this image. 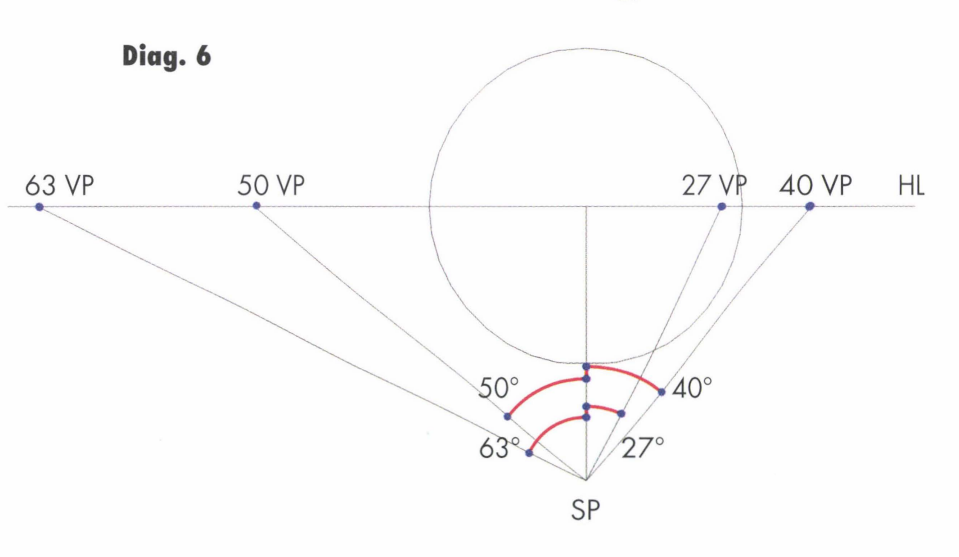 My question is, how do I place, or "move" the circle of vision in order to draw an object someone is viewing while tilting their head up or down? Like how Robertson had done in the aforementioned examples. I am doing all of this by hand, so I would prefer a method I can also do by hand.

Cone of vision (=COV) is not a strictly defined concept, it's an empirically decided 3D space around the sight line to the viewing direction. People generally can see at the same time well only items which are inside the COV.

People can notice the existence of items and detect motion well beyond the COV, but any analytic watching requires turning the sight so that the interesting items are inside the COV.

It's common to think that the COV has opening angle about 60 degrees, but that varies. If a person concentrates to do a job which is based on sharp vision his COV can be substantially narrower than 60 degrees.

One can draw or use a camera to get perspective images which show substantially wider areas than the COV. Such images look easily like they were distorted. The imaging may be 100% free of errors, but the result looks unnatural (=too extreme perspective), because the limited cone of human vision cannot show to us such extreme perspectives. They are unfamiliar, so they look distorted. That makes important to take the COV into the account and avoid presenting in one's drawings wider areas than the COV if one wants a natural looking image (see NOTE2).

Your attached images try to visualize how the COV follows the viewing direction and how maybe only a part of a tall or wide item fits into the COV if the item is watched close enough. The circles visualize the COV seen on the picture plane after the perspective image is constructed. Natural looking perspective needs that most of the drawn items are inside the COV.

So, you want to know how the COV can be constructed to a perspective drawing, no matter the viewing direction is tilted more or less upwards or downwards. As said, the COV in the image is always a circle - a cone seen from its top. The construction of that circle so that it's in accordance with the imaged 3D items is possible only, if the imaged 3D items are available as is or as a 3D model or as perpedicular engineering projection drawings. The circle presenting the COV can be drawn as an extra item when the actual drawing is constructed.

If you have an already perfectly drawn perspective image but no knowledge of the real 3D scene, only the image, you have no way to decide what was the right COV when the image was constructed. Proof: the image may present only a small part of the COV because the imaged objects are small. The image may be enlargened an unknown amount.

A ready perspective drawing or photo cannot be reversed - it's impossible to decide from the image which 3D scene + station point + watching direction combination is behind the image. But if the camera is known and there's enough images taken from different directions or one knows enough forms and measures of the 3D scene, he can do a photogrammetric analysis and extract 3D data of all visible items. Then also the circle presenting a wanted width COV can be inserted afterwards. I skip it.

You seem to claim you can construct the COV to a perspective drawing when the watching direction is horizontal. In that case you can handle the tilted view like the ground and imaged items were tilted, but the sight line is still horizontal. I guess this (in math 100% perfect approach) sounds a piece of self esteeming sophistry, so I show also an example where the ground plane is horizontal and the view is tilted.

A perspective drawing scenario (still without the COV) is shown in the next image: 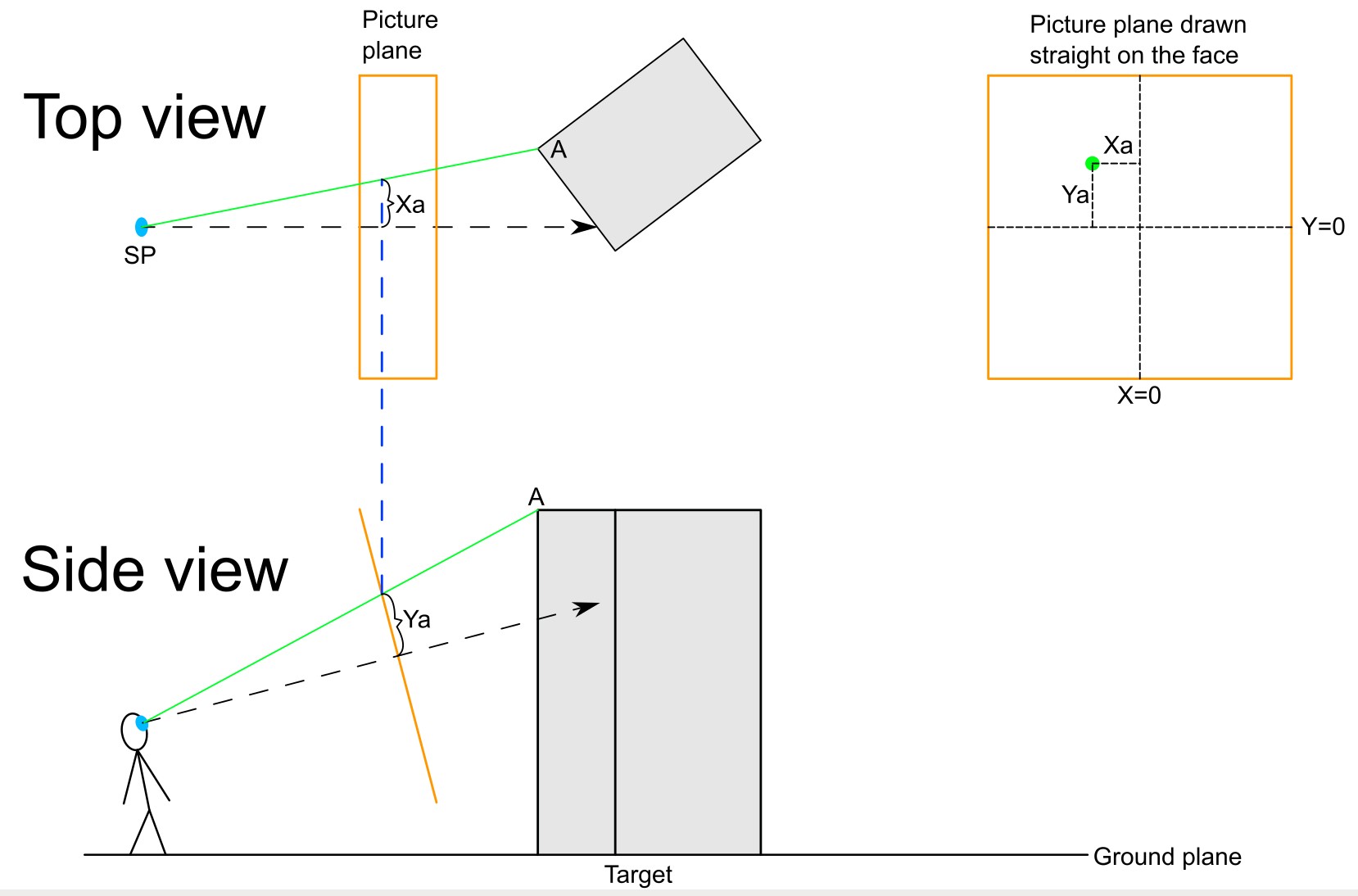 The image is not completed, it contains only one corner (=A) of the rectangular target box. The scenario is shown as an engineering drawing with 2 perpendicular views.

Top corner A of the target box is imaged. Projector lines (=green) are drawn in both views between A and the station point. The distances Xa and Ya of the crossings of the projectors and the image plane are moved to the straightened square and the green dot is drawn to show the image point of the corner A.

Manually on paper one can use for ex. a compass to transfer dimensions. Rectangular rulers are also a must. I avoided such difficulties by using drawing program Inkscape which is acceptable for the job, a 2D CAD program would be perfect and a 3D CAD program would construct the perspective image with nearly zero effort.

You may wonder the meaning of the blue dashed line. It shows the place where Xa must be measured from. This trick would be unnecessary if the picture plane was vertical. Then both views would present the picture plane as a line.

The COV is drawn to the next image. It's drawn to the side view with 2 magenta lines about plus and minus 30 degrees off from the sight line to get the common 60 degrees COV. 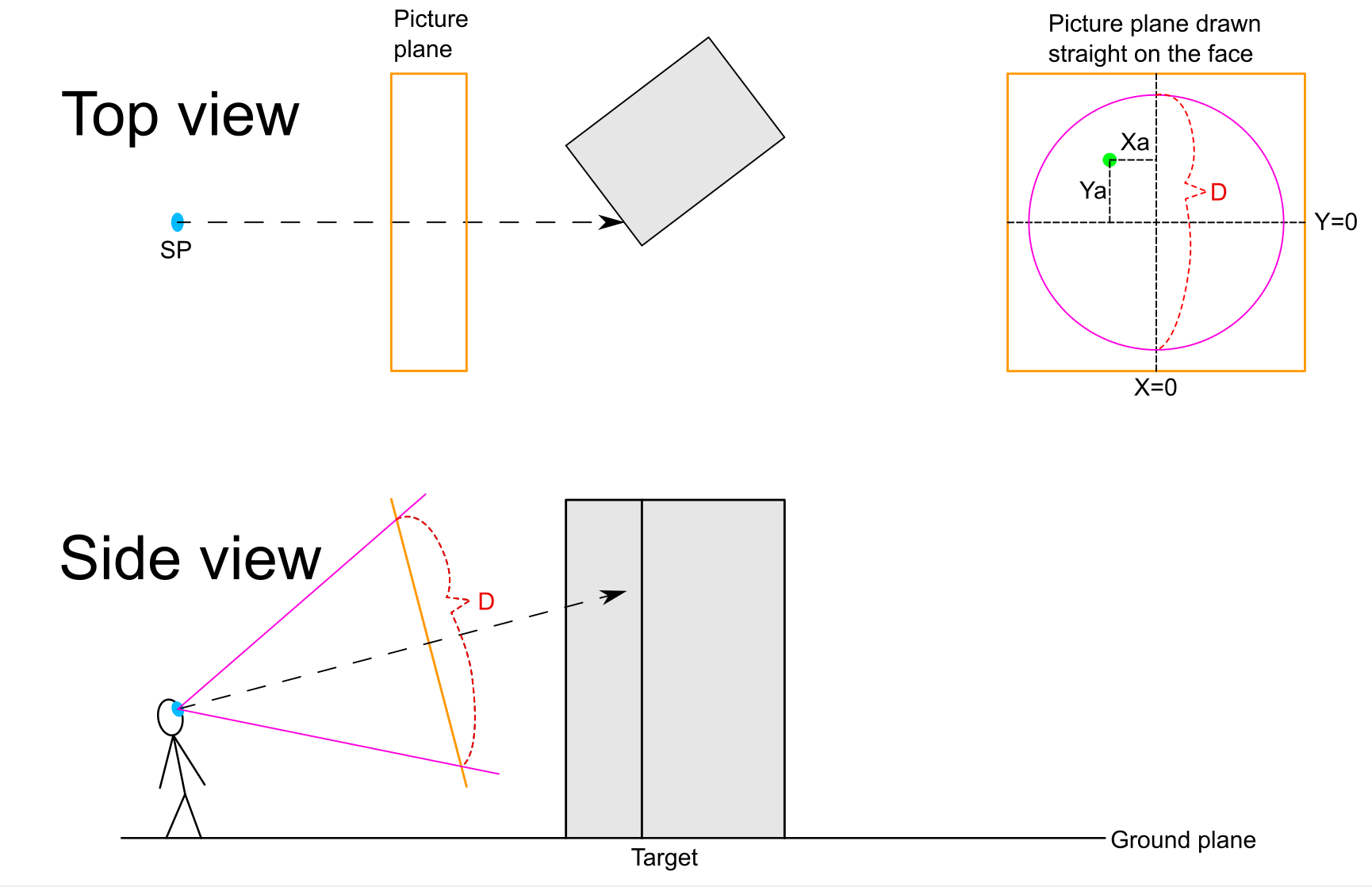 NOTE1: We cannot simply draw the same 60 degrees angle to the top view because the top view shows only horizontal distances which are shortened when compared to distances along the sight line. Calculating the right (bigger than 60 degrees) apparent cone opening angle for the top view is possible but it's not needed. The side view shows the diameter (=D) of the image (=a circle) of the COV as is. A magenta circle with the same diameter D is drawn to the straightened picture plane and that's your wanted circle.

If one still wants to sketch the COV also to the top view he can copy the diameter of the image of the COV from the side view and draw two lines from the station point to the endpoints of the diameter. 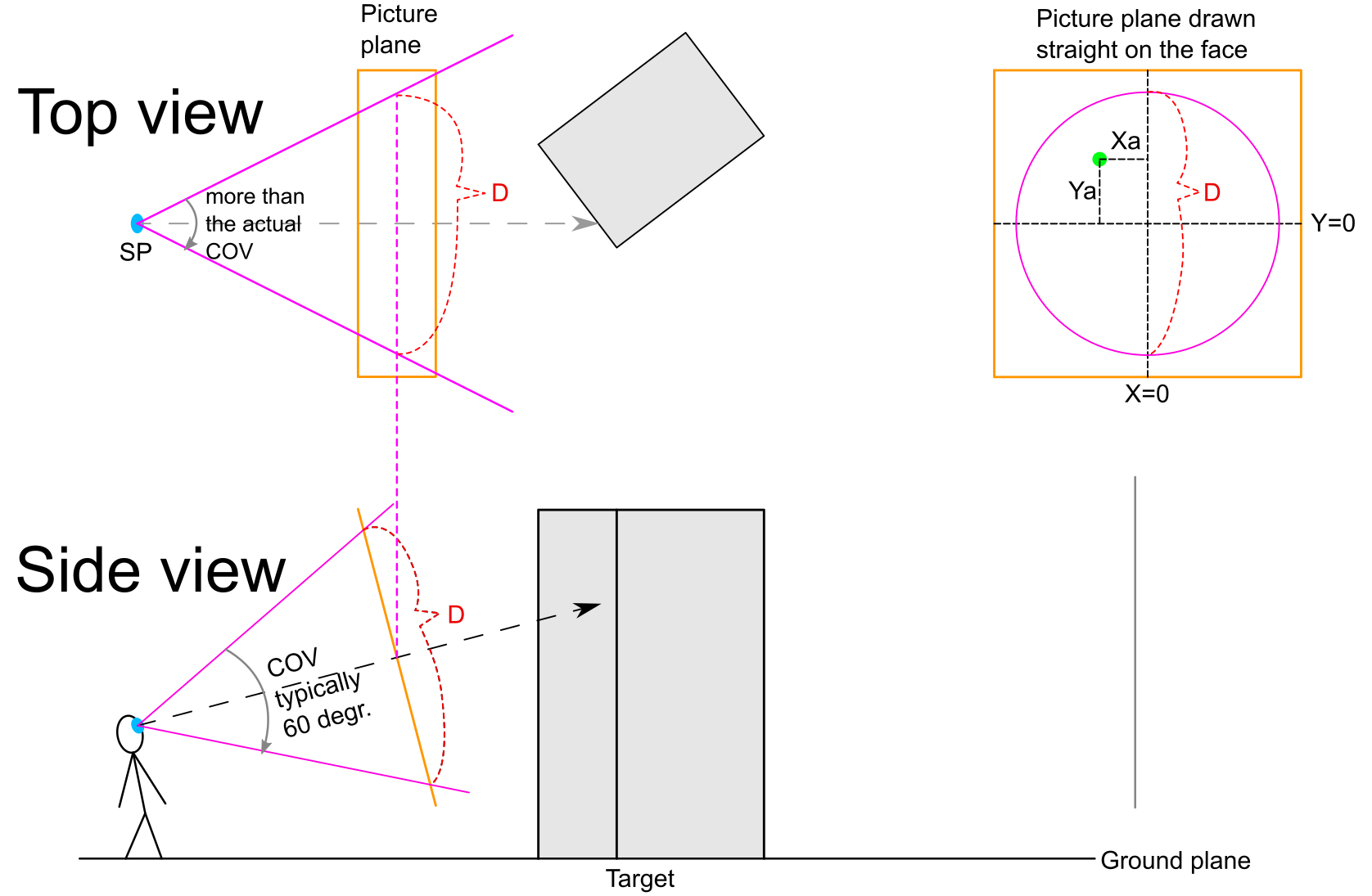 NOTE2: The actual image (=circle) of the COV is needed for nothing, except maybe doing one's homeworks. It's enough to know its meaning and approximate size to be able to keep most of the imaged items inside the COV.

Not the answer you're looking for? Browse other questions tagged drawing perspective technical-drawing or ask your own question.

0
How do I find the inclination of my Horizon line with respect to the paper/board while sketching a 2-point perspective?
3
Why is it recommended to make the cone of vision 60 degrees?
2
How does the distance between stationary point and picture plane effect perspective?
2
How do I draw the inside of a torus?
11
What is the name of this perspective and how is it constructed?
1
How to set up a perspective grid to draw a scene with multiple horizon lines
2
What are the causes behind the distortion that happens when you place a cube outside the Cone of Vision?
1
How to find the fourth point on a plane defined by 3 points
1
How can I find the intersection lines when a cube and plane intersect?
0
How vanishing point and centre of projection both are same?