How to mimic needlework embroidery in Photoshop?

I am working on a needlework embroidery generator and I want it to be able to generate simulations of the final embroidery. I came across an image which looks like what I need and from the metadata I was able to tell it was produced with Photoshop.

Does anyone recognize the filter/effect applied on the original image so the result looks like this one? 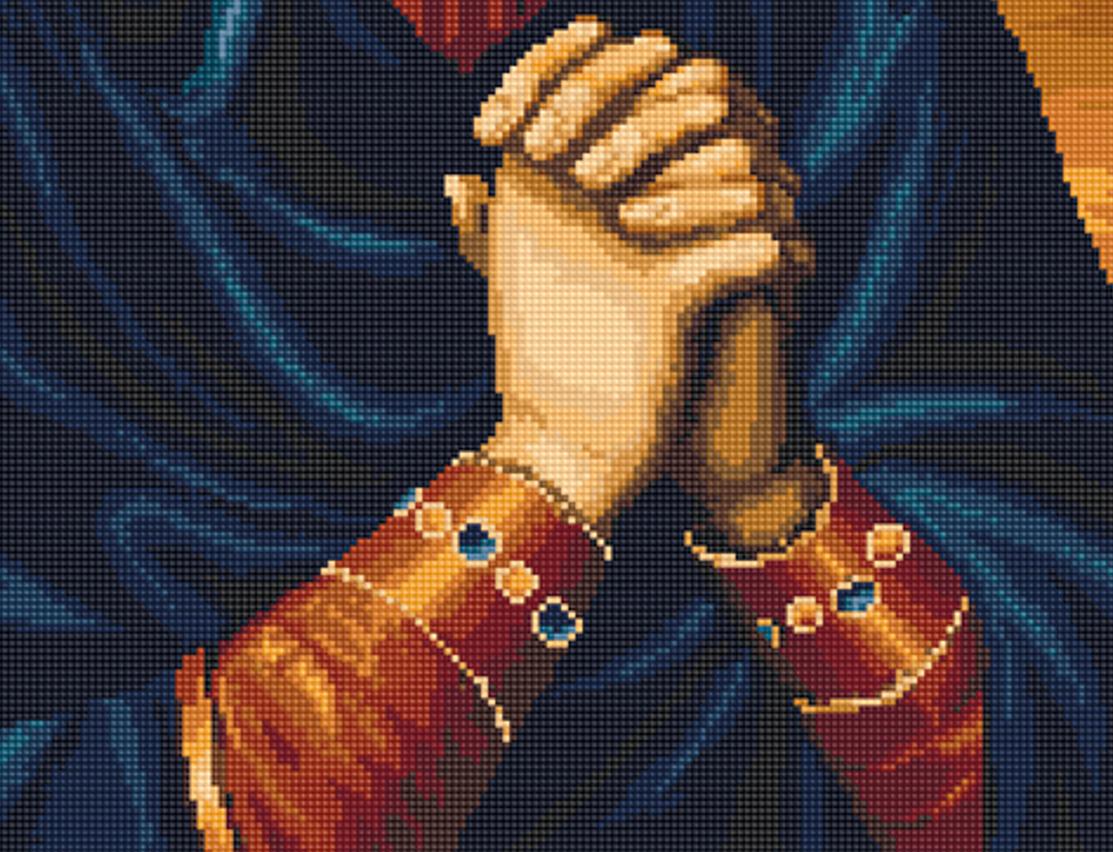 There is no single filter in Photoshop for this, unless there is a third party plugin avialable. Anyway, it's easy enough using a couple of steps.

Resize a normal photographic image, to make it something like 100px wide. 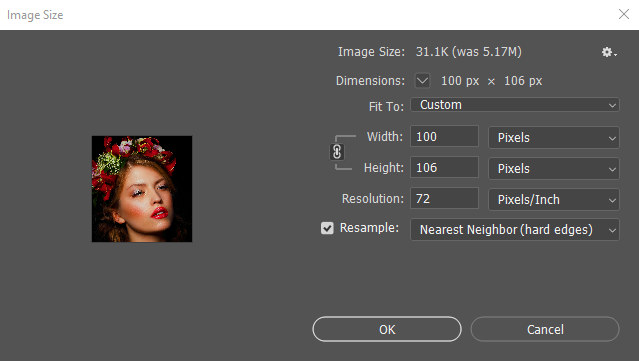 Zoom in to fill the screen, and do Image > Mode > Indexed, and set it up like this 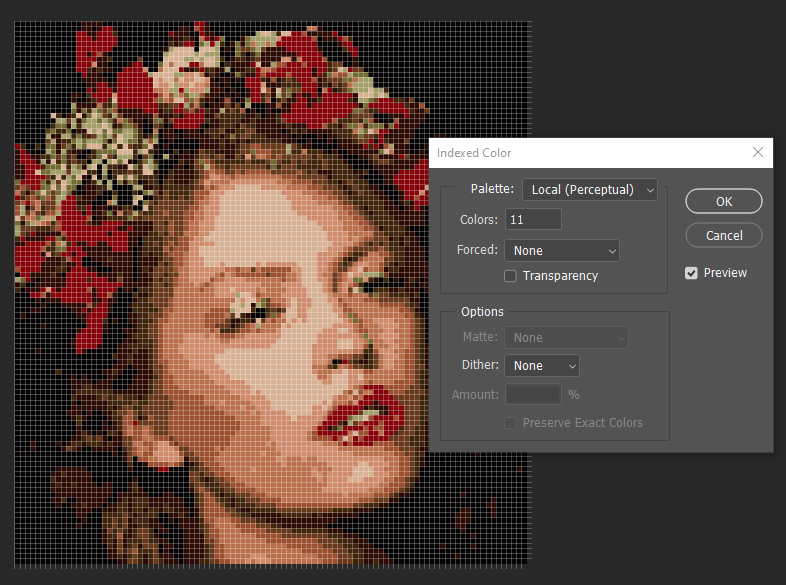 Rescale the image back up using the "Nearest Neighbour" option. 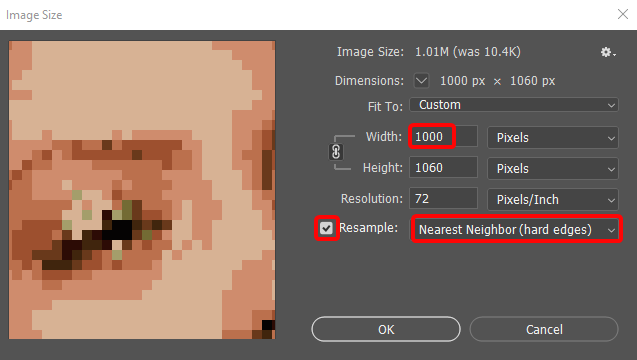 If you need a grid on top, make a custom pattern. This example is a 10px square, with a white row of pixels on the left and top edge.

Then back in your image, change back to RGB mode. Use the grid pattern you made previously to fill a new layer, and set the blending mode to Difference, layer opacity to 35%, and blur the grid layer using a 1px Gaussian blur

I propose mimicking cross-stich embroidery in Photoshop by adding some patterns and applying some filtering.

First I've used Mosaic filter to clean your example and revert it to pixel art. It has become a bit fuzzy because the grid didn't align perfectly, but it'll do for this answer. 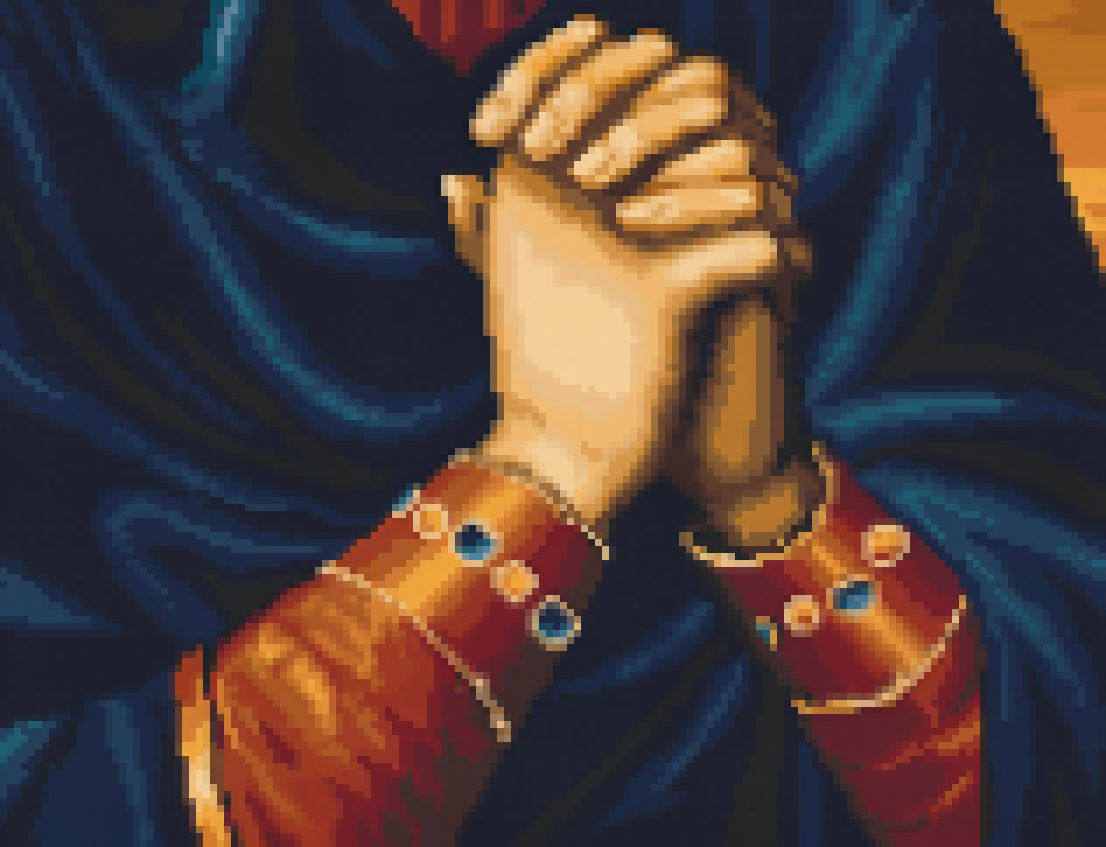 I'll layer three patterns on top of the original image. They could probably be reduced to one, but I'm keeping them separate to make it easier to finetune the effect.

Your example uses a 7×7 px grid, so we'll use that as well. The patterns are drawn in a 7×7 px document and created by using Edit > Define Pattern.

The first pattern is used to simulate the shade on the individual threads of each cross-stitch. 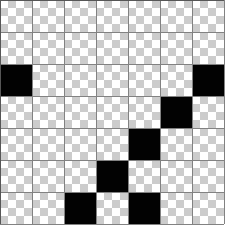 The second pattern simulates the highlight on the individual threads of each cross-stitch. 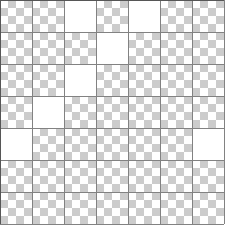 The third pattern simulates the little hole in the corners of each cross-stitch. 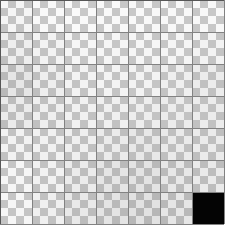 In the following I'll use a lot of specific values. These are of course just suggestions and can be tweaked to your liking.

Start with the original image. It must be pixel art and scaled up using Nearest Neighbor interpolation so each pixel is 7×7 px. Turn it into a Smart Object. Apply the following filters to round and soften the original pixels:

Add a Pattern Fill layer and select the shade pattern. Turn it into a Smart Object. Set its Blend Mode to Multiply and its Opacity to 40%. Apply the following filters:

Add a Pattern Fill layer and select the highlight pattern. Turn it into a Smart Object. Set its Blend Mode to Screen and its Opacity to 15%. Apply the following filters:

Add a Pattern Fill layer and select the holes pattern. Turn it into a Smart Object. Set its Blend Mode to Multiply and its Opacity to 80%. Apply the following filters:

Now you should have a document that looks like this: 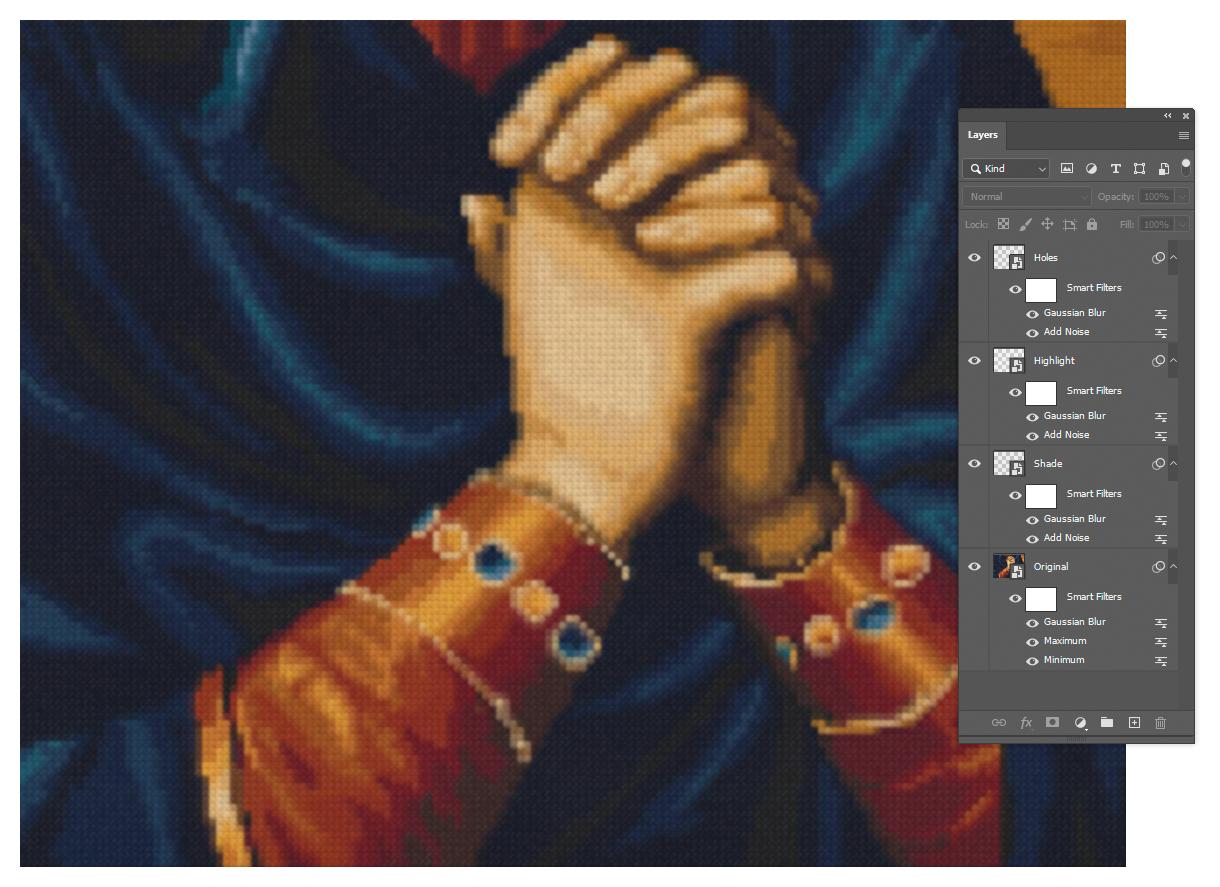 Pretty good, but too blurry. Select all the layers and turn them into a Smart Object. Apply the following filter to sharpen the image: 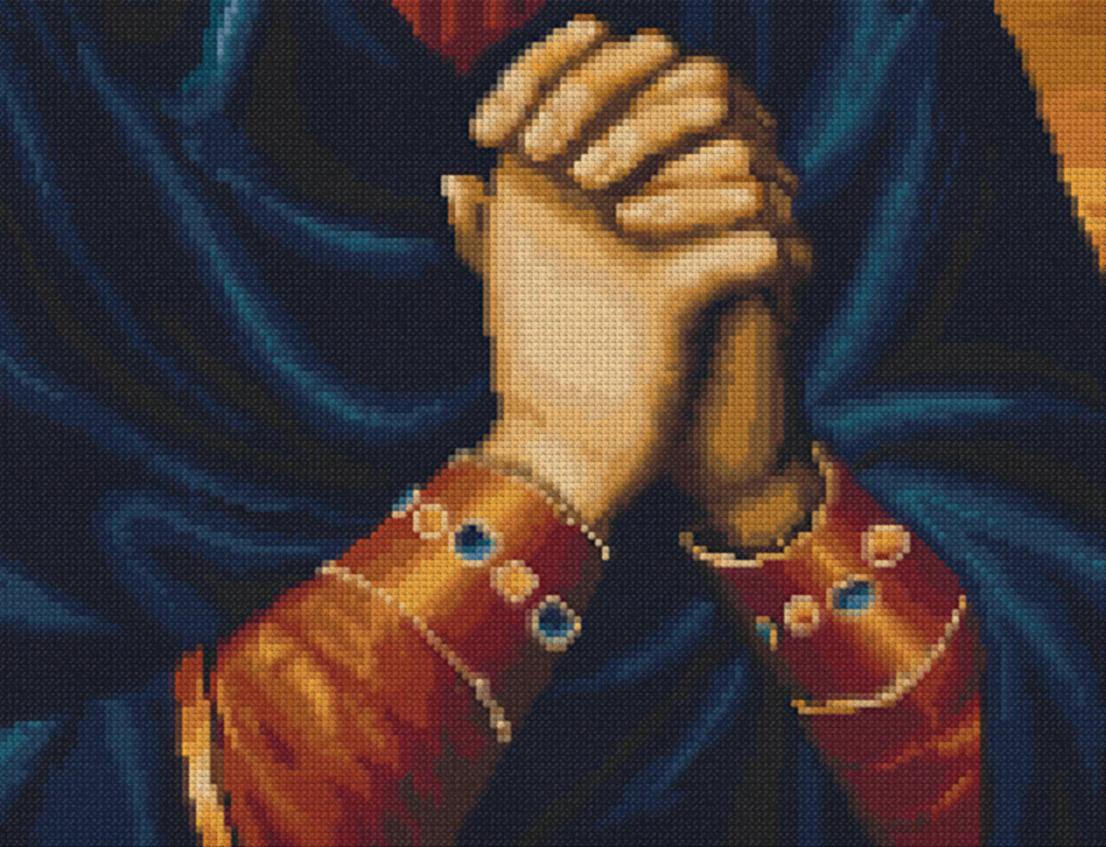 You could take it even further. For example by applying a displacement map (Filter > Distort > Displace) to make the image a little uneven and look more real: 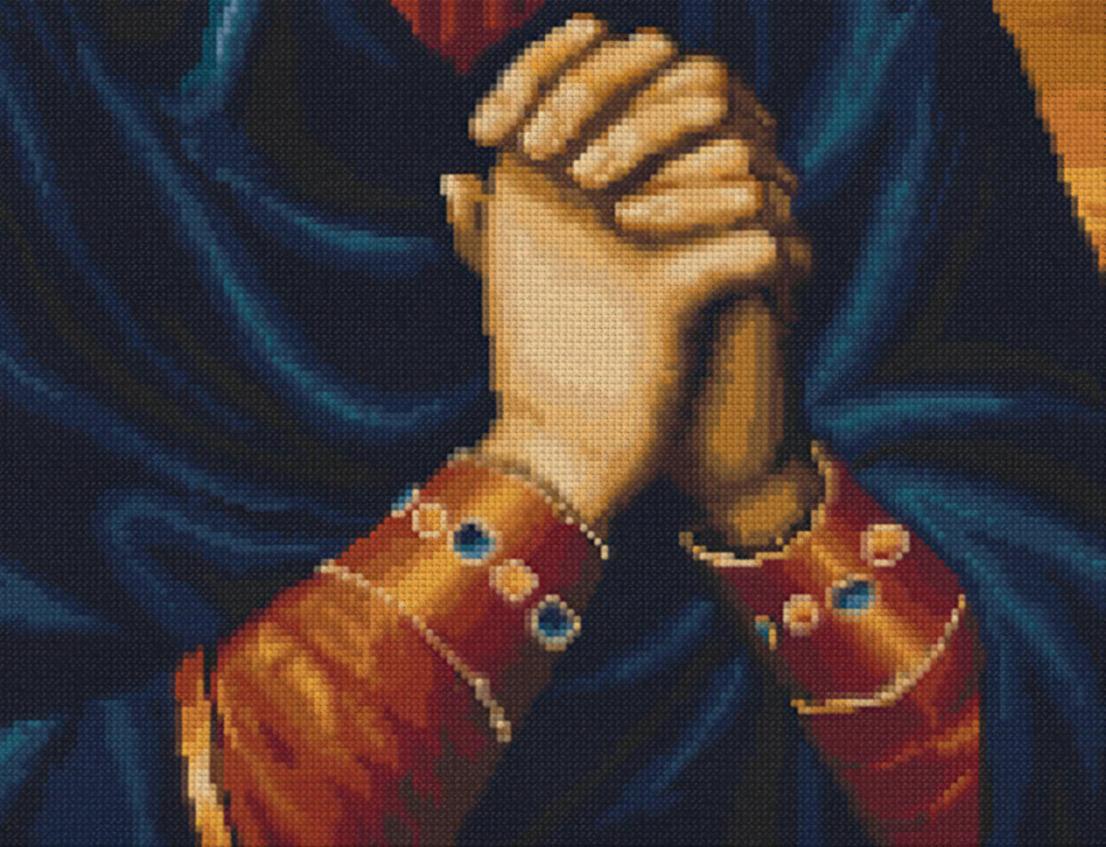 Or perhaps by using a larger grid and making the patterns more realistic.

You can get something resembling from an ordinary photo with Photoshop's standard tools. As an example we start from this partial screenshot of a sports news image: 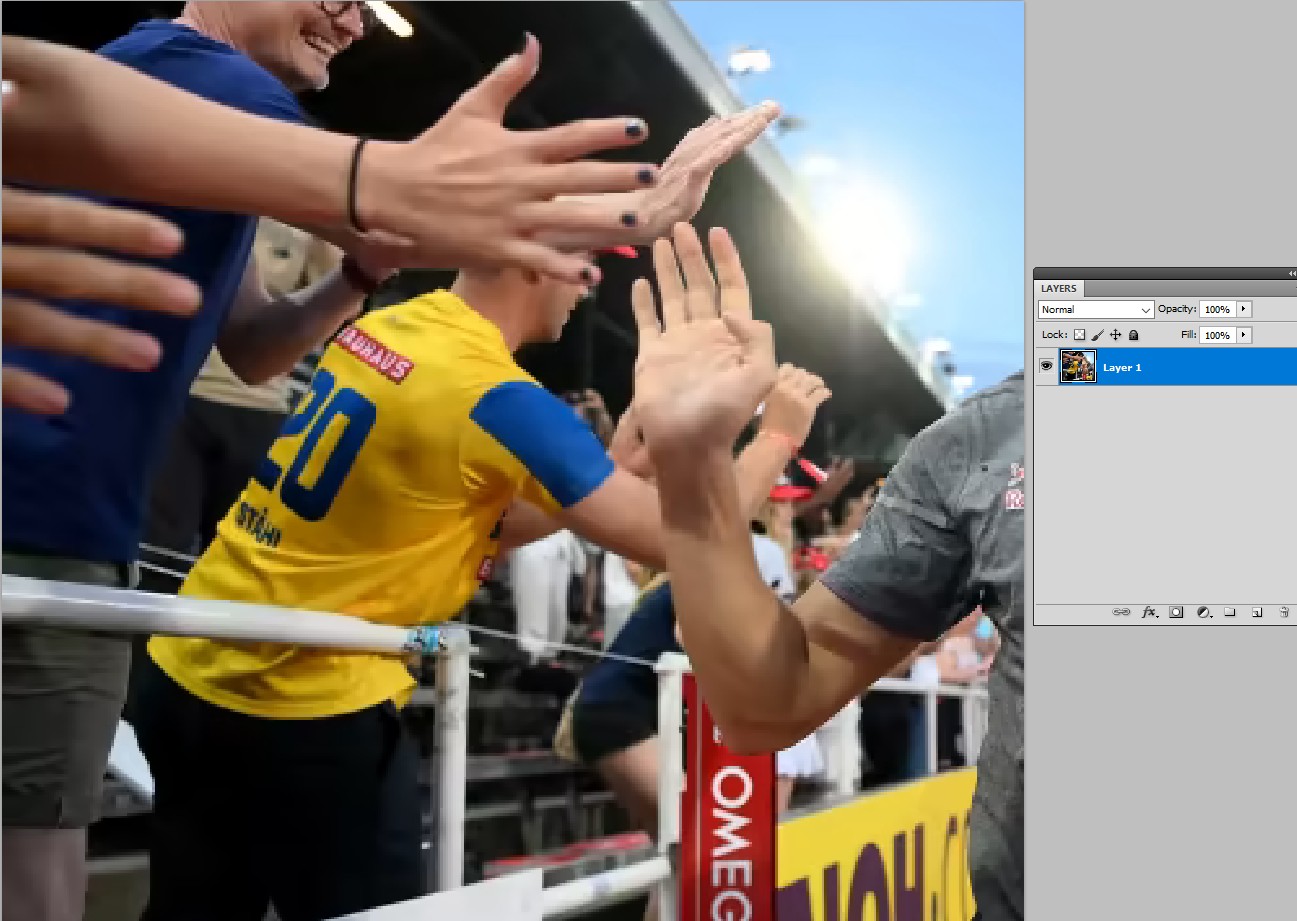 A textile image should be simpler than an ordinary photo. One popular way to simplify images is to use Photoshop's Cutout filter. It can simplify edges and reduce the number of colors.

Unfortunately this image has too complex colors and cutout would cause adjacent image items to get the same color which would make the border's unclear. For simpler images it might work well. For this reason I skip Cutout, but apply the other as essential simplifying. I reduce the image resolution. It increases the apparent pixel size so that the pixels can be made to look crafted: 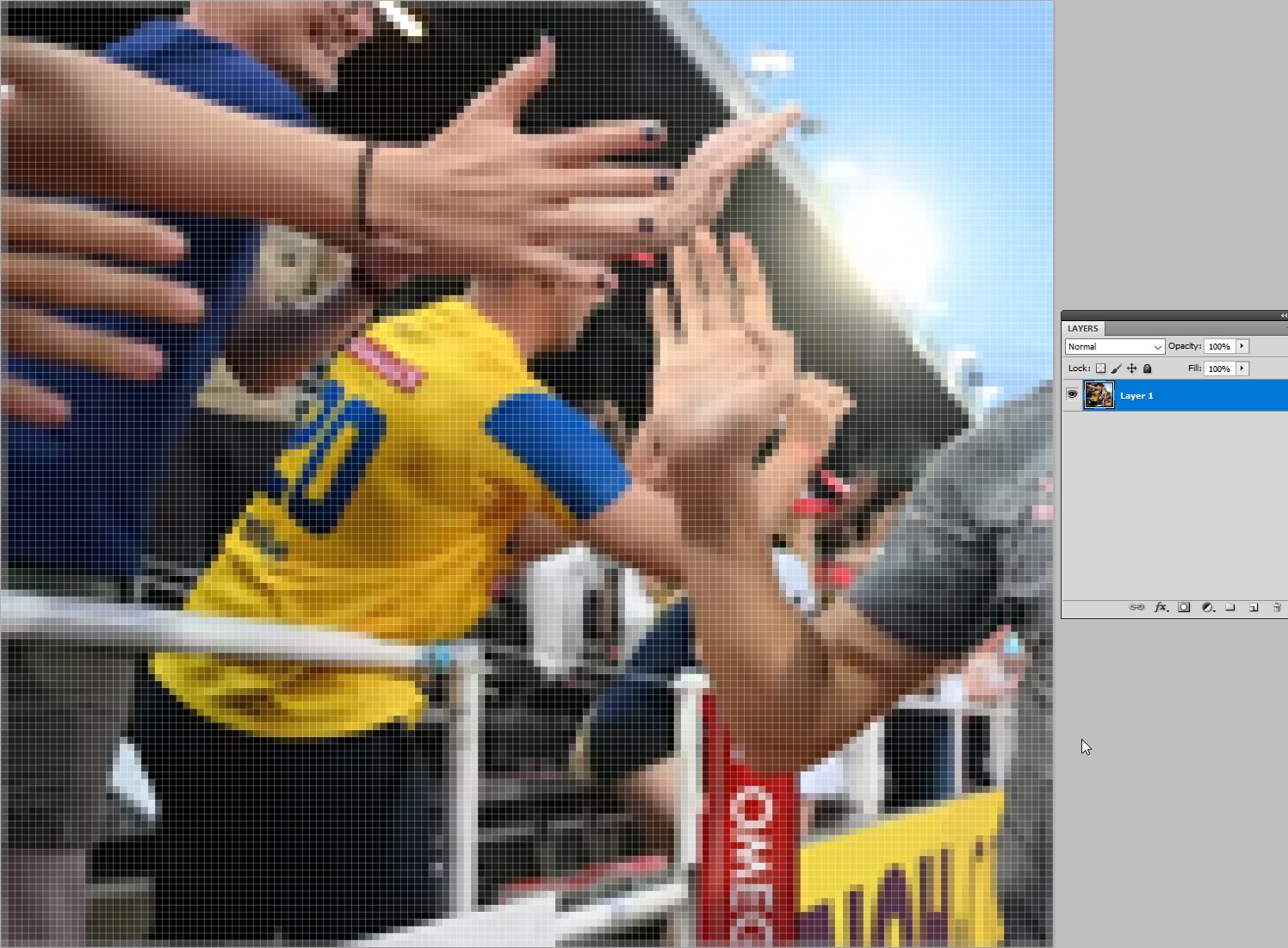 The color count must be reduced radically, because every pixel is a separate piece of a textile material. One way to get it is to turn the image temporarily to Indexed color mode. There's available many palette optimization strategies. I used this: 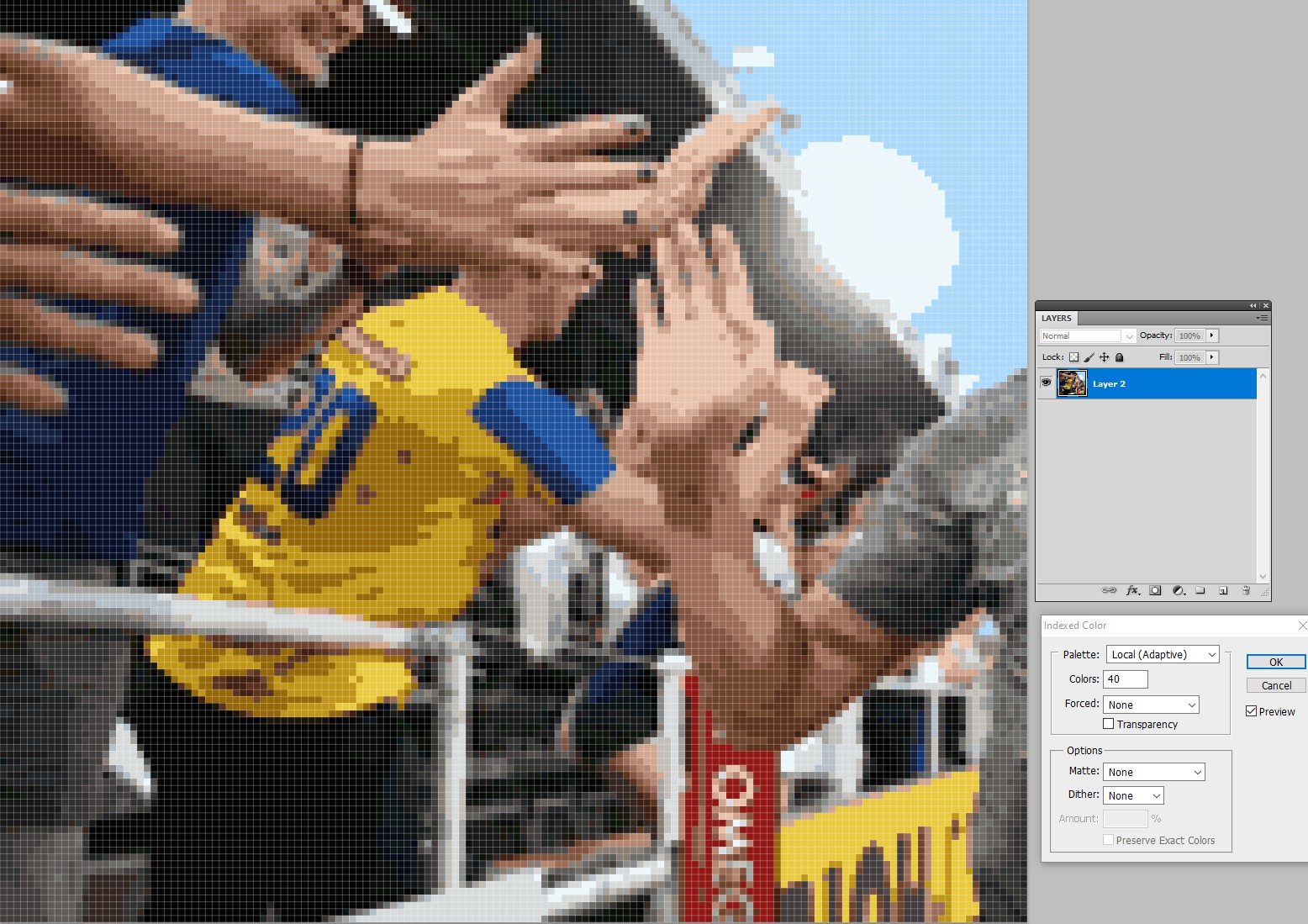 As many as 40 separate colors are used. A talented pixel artist could create from scratch or redraw an image by using less colors and it would still look sharper. I am not one, so this is what I have. A special Pixel Art Filter could help, but it should be based on some advanced programming to get even close to pixel artist's results. I do not know from where one could get such filter, but you can try this website: https://pixel-me.tokyo/en/

If the image happens originally be a drawing or painting with limited enough color range a good result is possible in Photoshop with low color count. This older case shows some evidence for it: How to make pixel art 2D 64x64 from 3D models/photo?

The pixels are now well visible, but they should look like they were crafted one by one - they need a structure. One way to get it is to scale the image to bigger pixel dimensions and insert a shading. I scaled the Image to 1000% with nearest neighbour resampling. The image was returned to RGB mode after indexing. In the next screenshot every 10 x 10 pixels block has the same color: 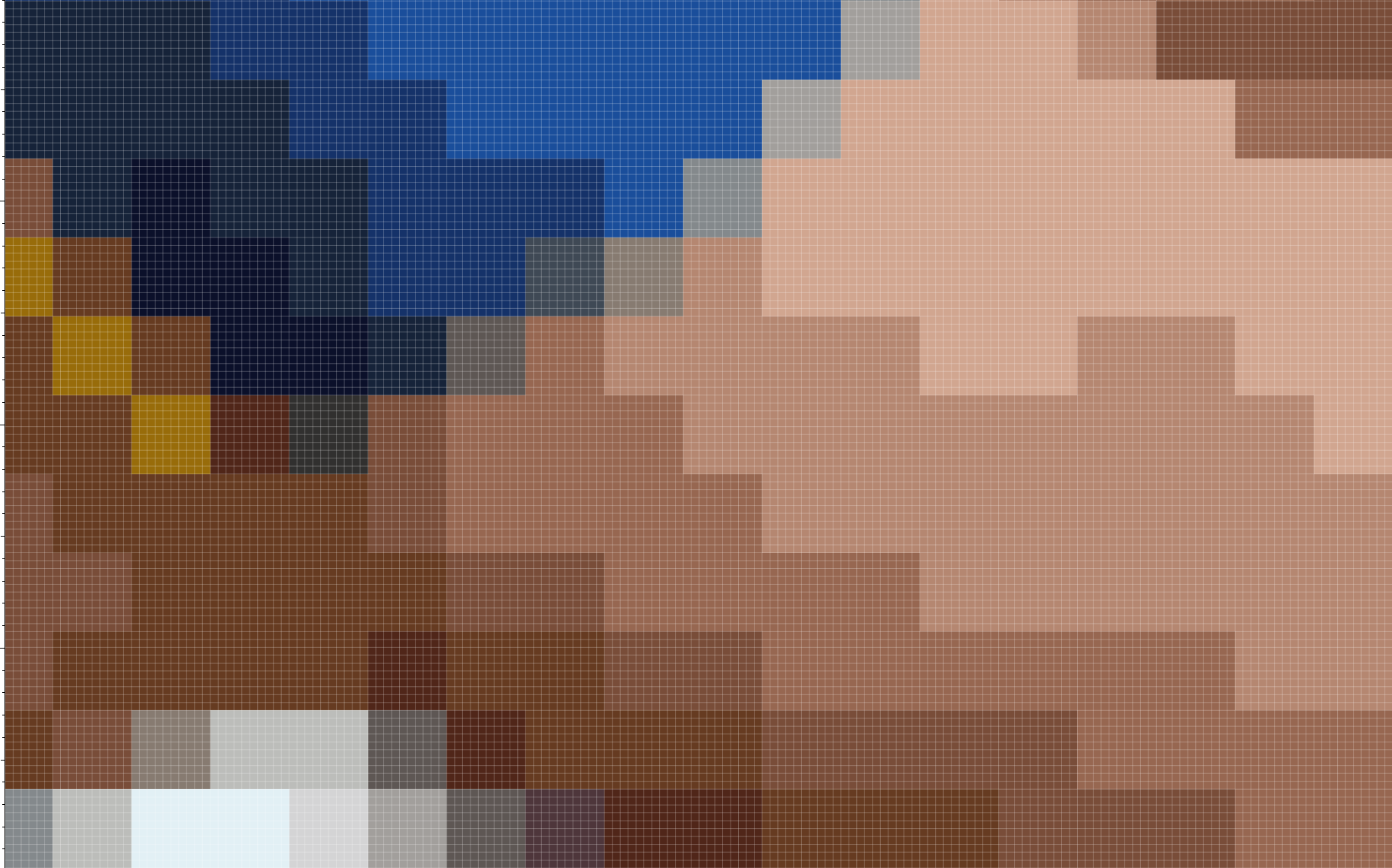 I prepared in another 10 x 10 px Photoshop image the next pattern to be used as the shading for the dots: 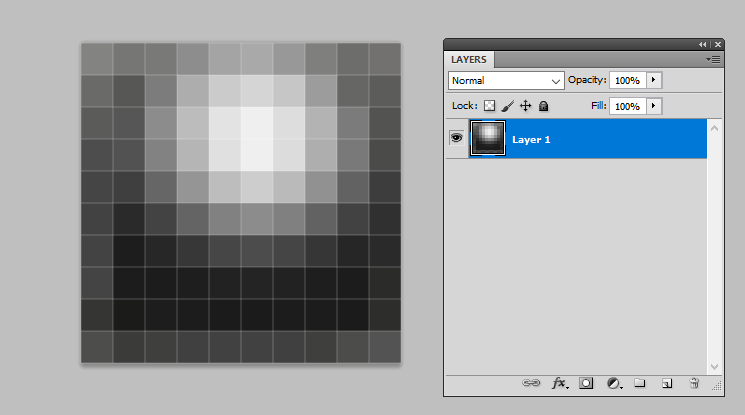 The pattern was originally this Illustrator drawing which tries to be a shaded bubble on a square: 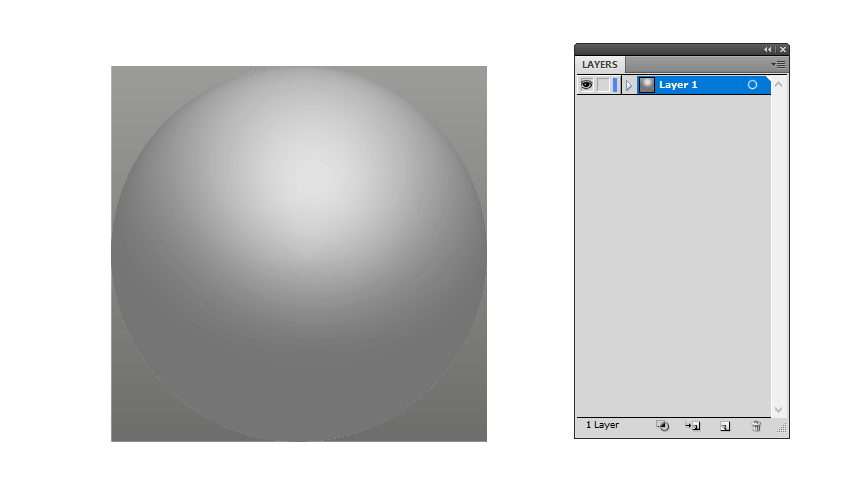 In Photoshop its contrast was stretched to cover the full range from black to white and the image size was reduced to 10 x 10 pixels. The image was selected and definded to be a pattern for the Pattern Stamp tool. (Edit > Define Pattern)

The pattern presents the variations of the light. It should not be used as a transparent overlay. It does its job as the layer mask of an adjustment layer which increases contrast. It's used in a curves layer (=Curves 2 in the next image). The layer mask is simply filled with the pattern stamp - one click with the max.brush size. 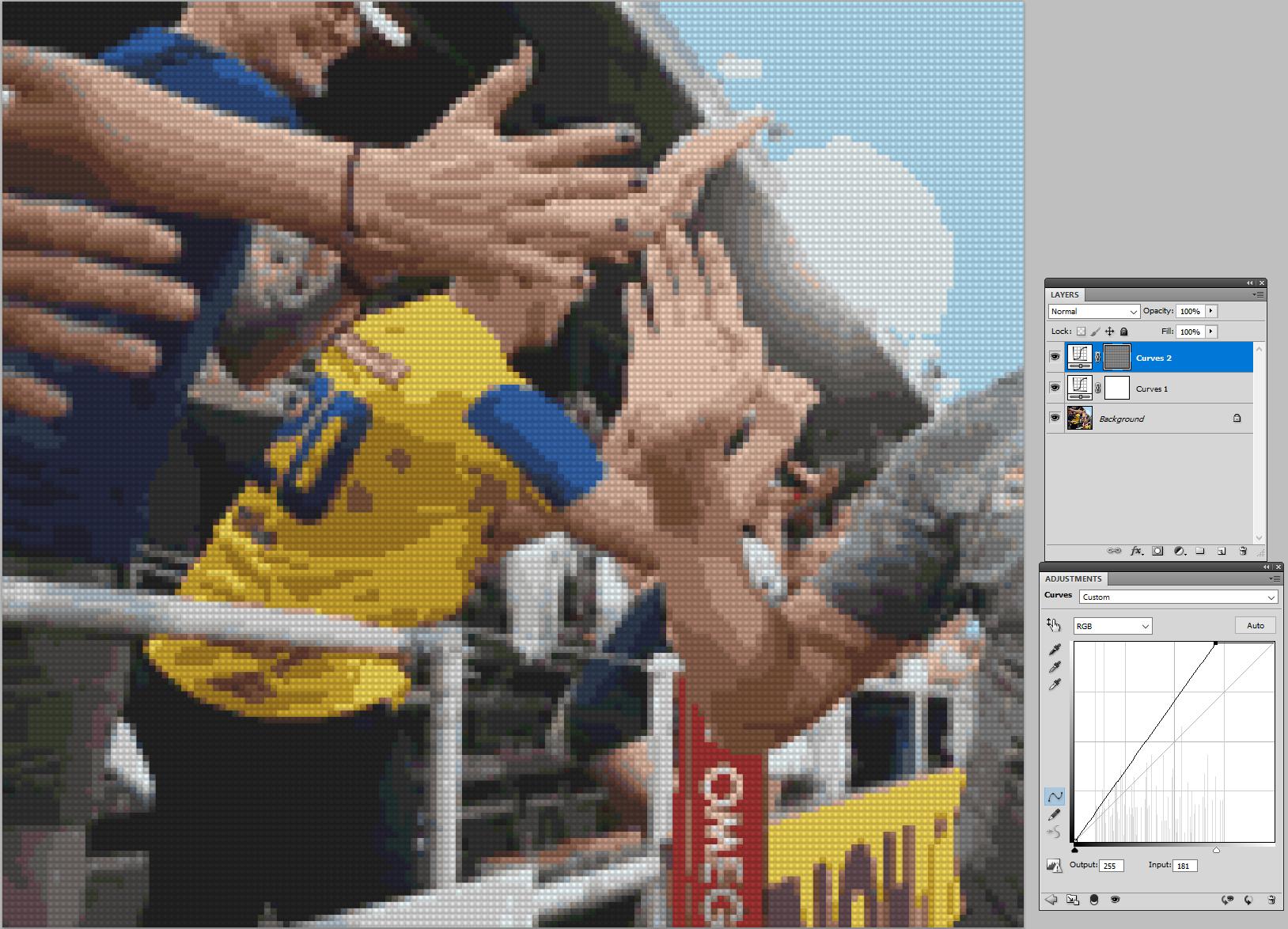 There's also Curves 1 which makes the image duller. It lifts up darks so that the pattern can be noticed also on dark areas and darkens brightest areas to prevent Curves 2 to cause clipping. Here only Curves 1 is active: 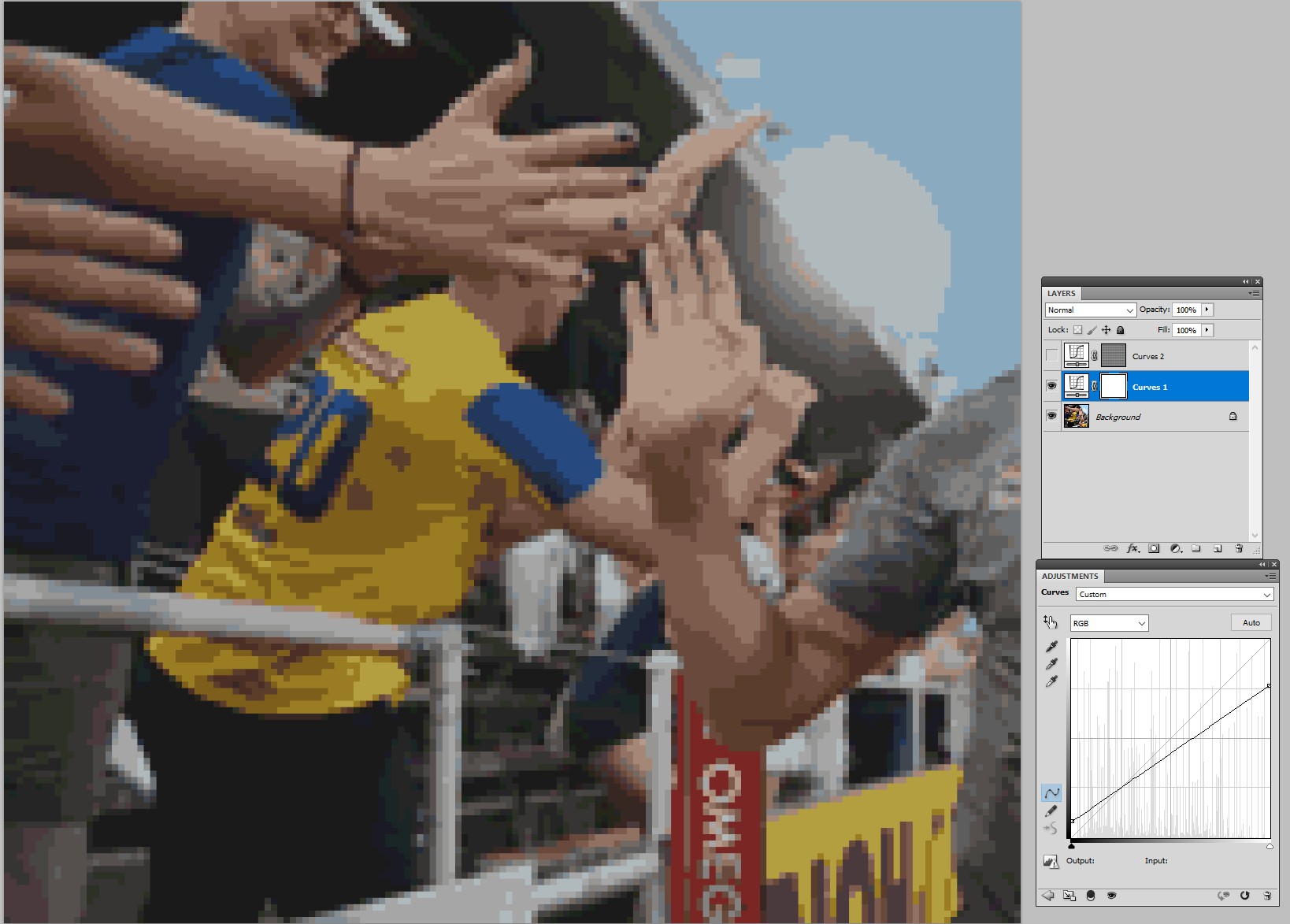 As you see it's not as full of color as the original image. That's caused by the fact that a part of the image is in shadow due the structure of the effective pixels. It cannot be compensated because the brightest parts in shaded effective pixels are as bright as they can. The appearance becomes brighter when the image is zoomed to a bigger size so that every pixel in the 10 x 10 shading pattern is actually separate on the screen: 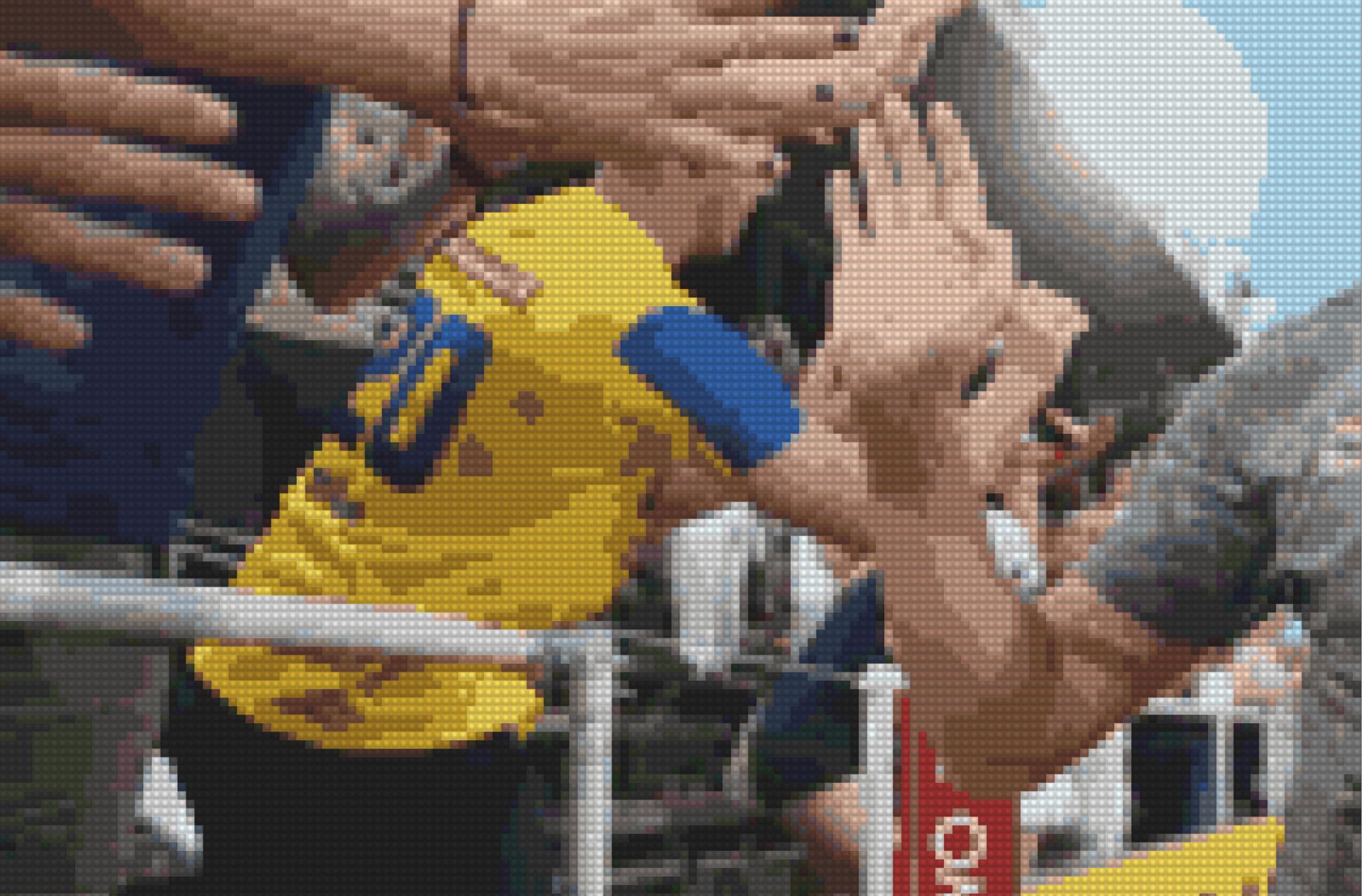 To make it look brighter in the image one could allow clipping or reduce the depth of the shadows. In the next image Curves 1 only lifts the dark areas to have the pattern visible: 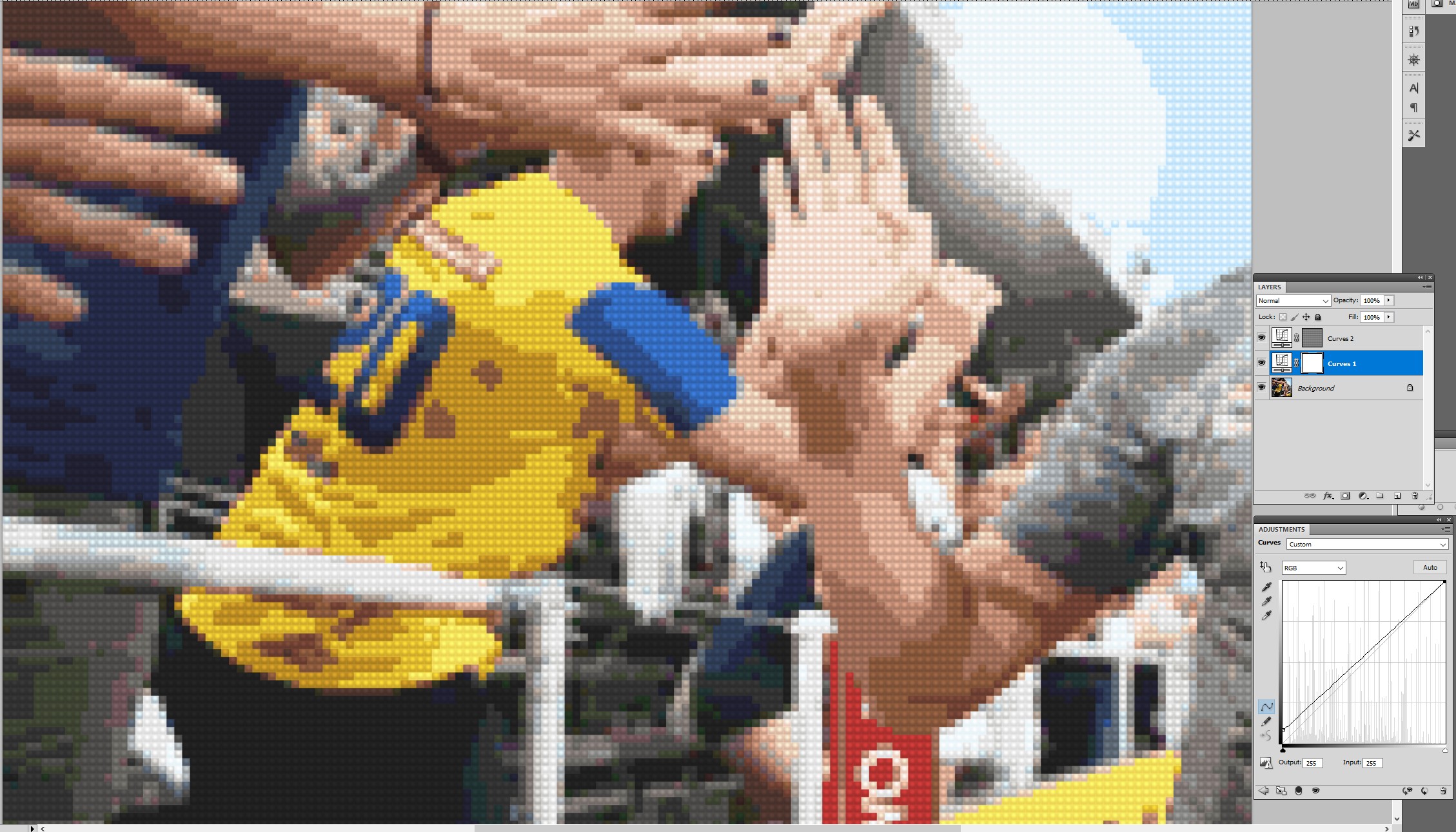 In many areas the brightest spot is clipped, so one must be careful with this. In the next image clipping happens, but not as much: 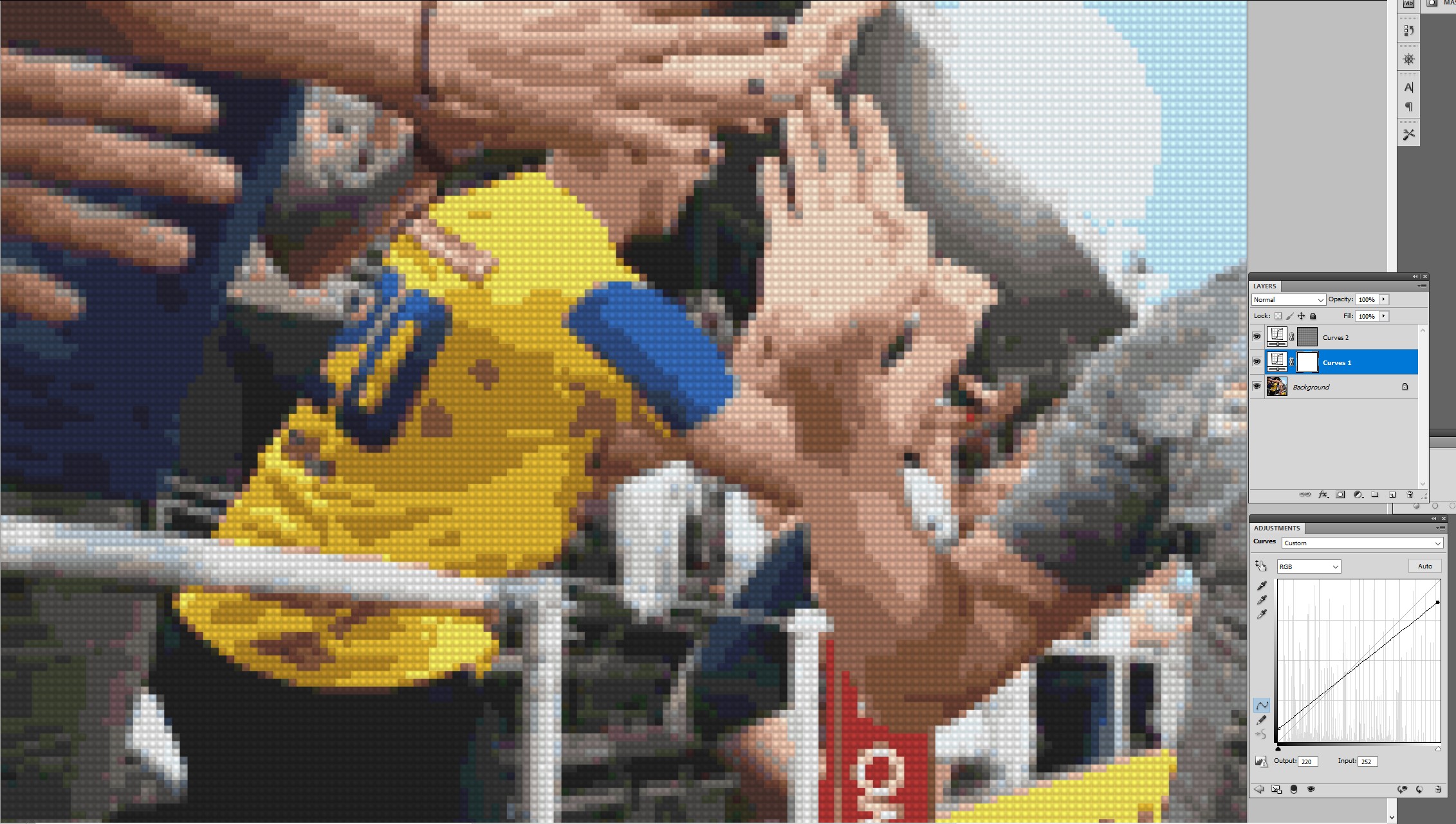 Not the answer you're looking for? Browse other questions tagged adobe-photoshop embroidery or ask your own question.

3
How can I achieve this stamp / photocopy effect?
0
Exporting 3x images in Photoshop
3
Generating 8-bit versions of images
2
Multiple view in Photoshop : different layers visible for live modification (without Smart Objects)
1
Photoshop Holographic textures
0
How to make designs to have realistic woven/knitted texture