How to add exceptions to space before and after a paragraph?

I have defined four paragraph styles and would like the space between them to work "in pairs".

By setting up "space before" and "space after" there's always one point above that is not met. Is there any way to do this? 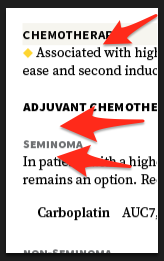 Adding "space after" the first paragraph style doesn't work because it adds space between it and the related body text style (with indent).

Let's assume you have the following styles:

This will work fine until you start having multiple headings right after each other.

In my opinion multiple headings right after each other doesn't really belong in classic typography and should normally be avoided if possible. Content-wise it seems a bit strange to add a heading and then have nothing to say and jump on to the next level immediately and it can also give you some trouble design-wise depending on your styling.

Nonetheless it's not an uncommon sight in for example reports and scientific papers, and I totally acknowledge that designers should find ways to make it work.

I can't see how your problem could be solved with only four styles. You can't take advantage of the Space Between Paragraphs Using Same Style setting as it will only work if it's the exact same style, not if it's a style Based On on the style.

Of course you would always want to have as few styles as possible, but sometimes you have to accept that adding a few specific styles can solve some local problems even if they only occur a couple of times in your document.

So one of several possible solutions would be to add the following styles:

(I'm always trying to avoid naming styles according to their appearance, but rather try to describe their function. Perhaps you'll change the design later so having "space before" in the name won't make sense anymore.)

3
Indesign: how to style a paragraph so that it will occupy no vertical space in the document flow (similar to "float" in css)
0
Indesign – add symbol before first and after last paragraphs of the same style
1
Body text alignment to baseline grid when using paragraph styles
6
InDesign: Adding space before the first paragraph
1
How to set a different space for the first bullet point?
2
InDesign: Increase "space before" but only if content is above
0
InDesign: How to move a paragraph up or down without baseline shift?
3
Don’t add space between paragraphs of the same style
1
Adobe Indesign: Finding the last bullet in a bullet list
2
InDesign Space Before and After not working for paragraph style