Are there any Japanese fonts with a similar style to the English font "Diploma Regular"?

For my small personal graphic design project I'm doing a Japanese cover of "Grand Theft Auto: San Andreas", but I am having trouble finding any Japanese font with a similar style to the English "Diploma Regular".

W.I.P. version of the cover: 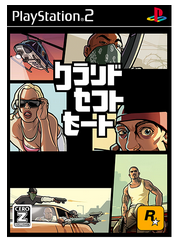 It's a Latin script often called Black Letter or Gothic. You could theoretically just write your own, since that kind of script was originally handwritten.

The trick is that these styles of writing are made with an pen with a wide nib, held at a constant angle of around 45 degrees. 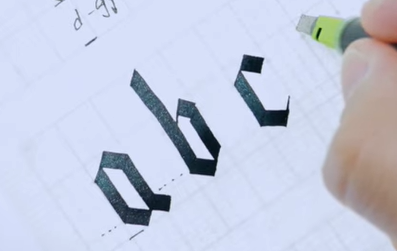 You could try writing Japanese with a pen like that, and it would kind of resemble a Latin script written that way. It's also possible to simulate it using the Calligraphy tool in vector software such as Inkscape, or a calligraphy brush in Illustrator. The problem of course is whether writing made in this way would be readable in Japanese, since Japanese is traditionally written with a brush, and not a western style pen nib.

I'll let you be the judge. Here's an example below. Assuming the following are the correct characters (as I don't read or speak Japanese), I took these from the Wikipeda article, I came up with this. However, I don't know if this will be readable for a Japanese speaker.

For comparison, here's a Latin letter B written with the same pen and style

Edit: Looks like somebody else has already had a similar idea here: this is for Chinese, but the same idea basically. https://www.behance.net/gallery/4850969/Chinese-Gothic - Unfortunately, I couldn't tell if this a downloadable font or not. Perhaps you could contact the author.

A search for "Japanese Blackletter Font" produced a few examples, although most seem to be hand-drawn artworks rather than downloadable fonts. But I did find a font called Goura that might be what you're looking for: 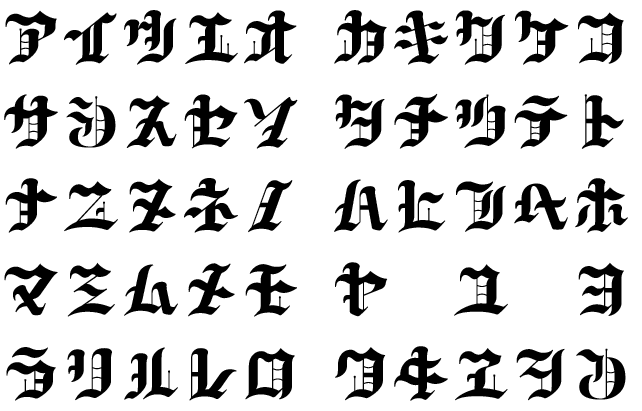 It's Katakana-only (i.e., no Hiragana, Kanji or Roman alphabet). The license says the font is basically freeware as long as you don't use it as part of a trademark or registered design.

12
Looking for a Japanese font to match Garamond
10
Open type sans serif fonts with true small caps
36
Are there any free emoji fonts?
7
Fonts with ambiguous / similar characters
27
Are there Cyrillic/Greek/Japanese/Chinese equivalents of Comic Sans?
37
How to use San Francisco font on Windows?
1
Are there any fonts with various styles for the same letter?
2
Are there monospaced fonts with the same pixel width for regular, bold, italic, and bold/italic?
2
Font licenses in portfolio projects