Is it possible to write a script in Photoshop that reads the values of a pixel on two layers, then sets a new value in the layer mask of a third?

I can calculate the necessary darkness value K for each pixel of the layer mask with the equation K = round(100 (1 - (C_{BG} - C_{out}) / C_{BG})). However, doing this for each pixel one at a time would be incredibly tedious. Is this something that can be automated with a script?

I have a Photoshop file with the graphic-and-background as Layer 1, the background-without-graphic as Layer 2, and a solid-black layer with a layer mask as Layer 3. I want to have a script that:

until it has covered all the pixels.

I know Photoshop supports scripts, but I've never used any, so I don't know how to go about setting one up, or if it's even possible to achieve my goal here.

Not asked, but after replacing your complex variable names with B (=pixel from Layer1) and A (=pixel from layer2) your K will have equation K=Round(100(1-(B-A)/B).

It reduces in elementary math to K=Round(100(A/B))

B is obviously from the background and A is from your black icon on red.

Seemingly you aim to solve the problem in your previous question, but now you have done some tricky reasoning (see NOTE1) and found a formula which reduces to the equivalent of layer blending mode "Divide".

We can try it in GIMP which offers some flexibility beyond Photoshop when we try to make the transparent result you finally expect: 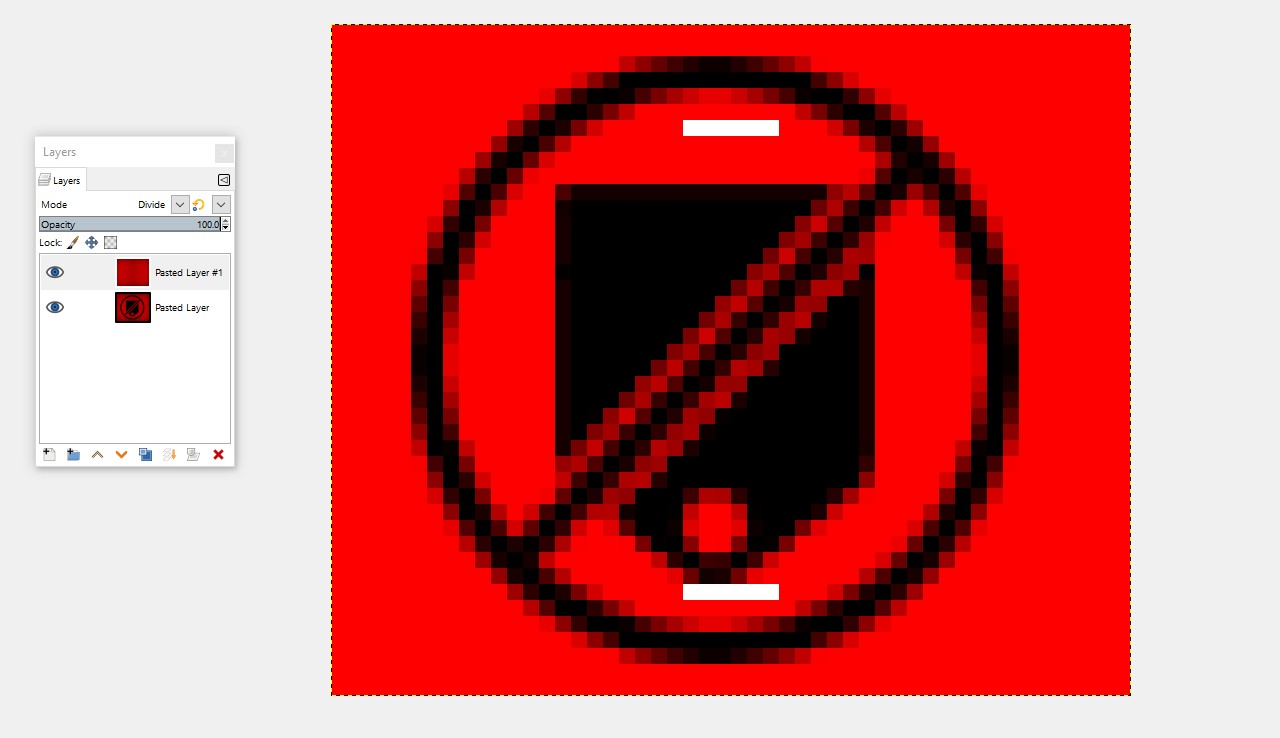 The white areas are caused by non-zero Green and Blue channel pixels in the icon layer. Format conversions probably have caused them. The result becomes perfect if we force in the icon layer the green and blue channels to zero for ex. with Color > Curves: 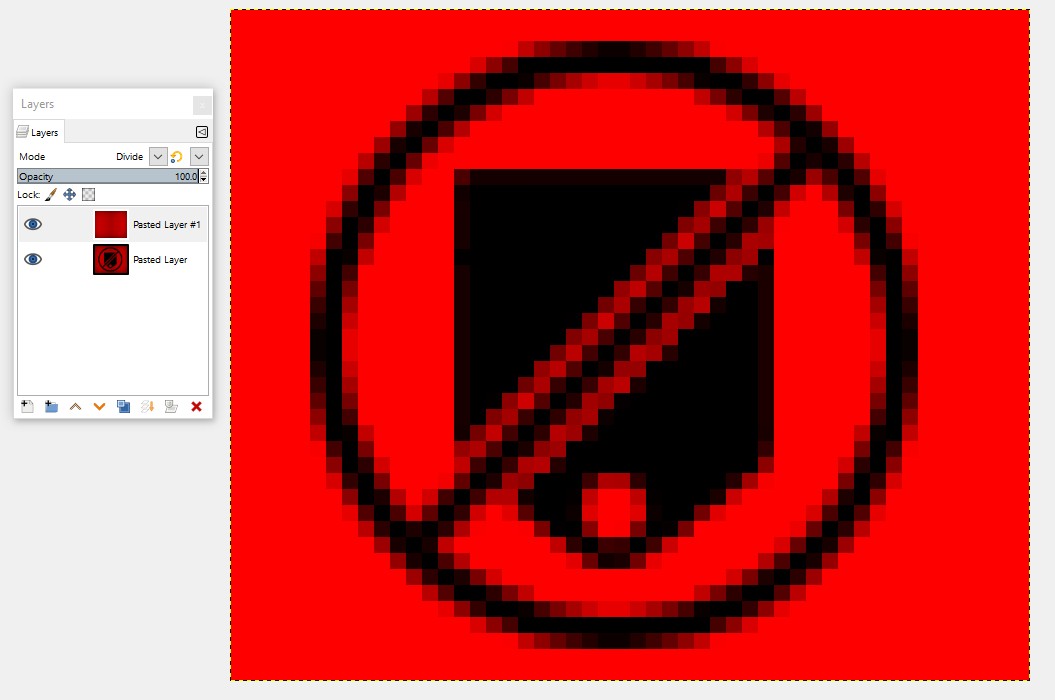 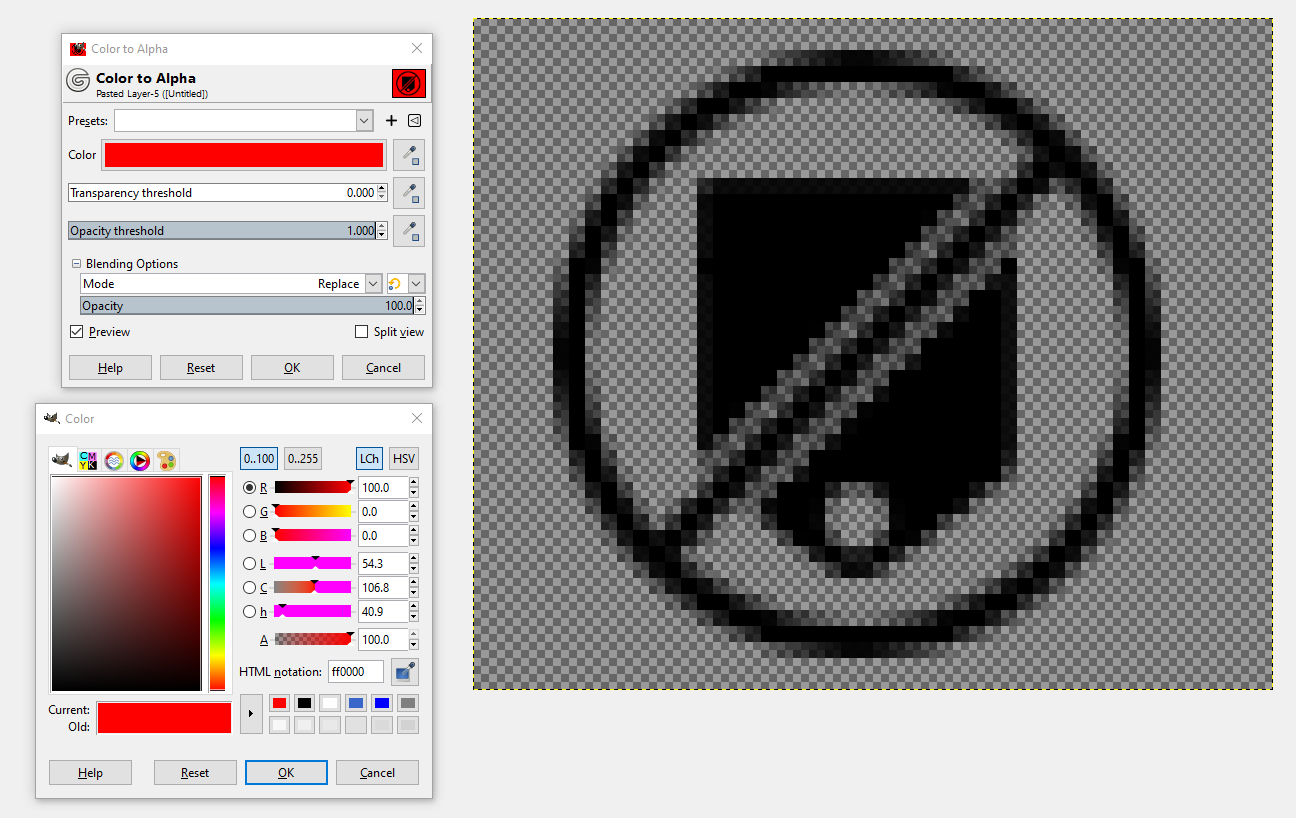 This should be the same you wanted to get by scripting.

BTW we have a 400 px wide versions of your images and it seems like your original images were only 50px wide. We could resample the got image to 12,5% size. The interpolation method in GIMP should be = None. That's the same as "Nearest neighbour resampling" in Photoshop.

I'm afraid this is still not the solution for your original problem (=recreate the pixelixed icon and its anti-aliasing), because your icon on red and background only images are not directly comparable. The icon on red image is a layer blending result and affected by the non-linear gamma which makes the reasoned equations inaccurate. The layer blending equation should be converted to gamma-corrected one for a better result. I skip it and suggest you to redraw the image as long as you have some energy left.

Not the answer you're looking for? Browse other questions tagged adobe-photoshop photoshop-scripting or ask your own question.

34
Photoshop CS5, how to create a layer mask from a layer?
1
Photoshop - Subtract two images
0
Creating a "black mask" file covering all non-transparent pixels in Photoshop image, all layers
1
Photoshop: Mask of variable threshold value
2
Natively run actions for each layer automatically in Photoshop?
0
In Photoshop is it possible to change the size of all layers (that are different sizes) to the same height?
1
Monochrome image resize, goes to grayscale?
1
Is it possible to separate an icon from a background?