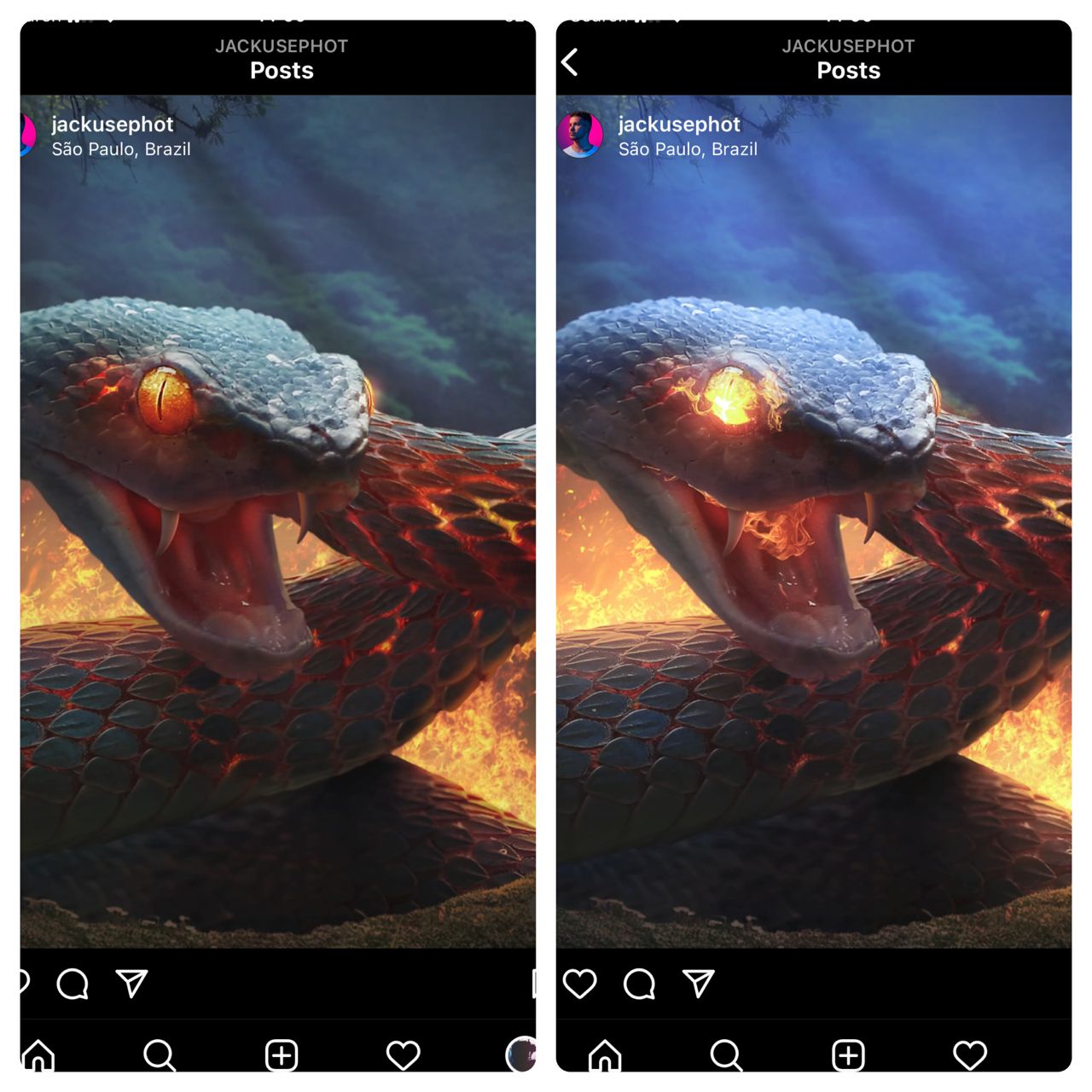 After you've done all things in Photoshop to make a good photo montage, you will have a photo like the left picture. But after that amazing artists do something that I don't know like a final color and light grading that make a picture like the right one; it's shiny and cinematic, it's amazing. How do they do that? Tell me, are they doing that in Photoshop or another app and how should I do something like that? If you have a video tutorial or link, please send me.

Try a curves adjustment layer to make the image pop a bit. You can make a gentle S curve in the RGB, and in the blue channel, a small upward curve.

The eye of the snake looks like it has been edited separately with some extra flames overlaid, and the flames inside the mouth have also been added. A curves adjustment alone won't give you that result. Maybe try to look for a flames brush on DeviantArt, or you could clone some flames from some other part of the image onto a separate layer, and change the layer blending mode to overlay/lighten etc.

Anyway, here's what a simple curves adjustment can achieve. 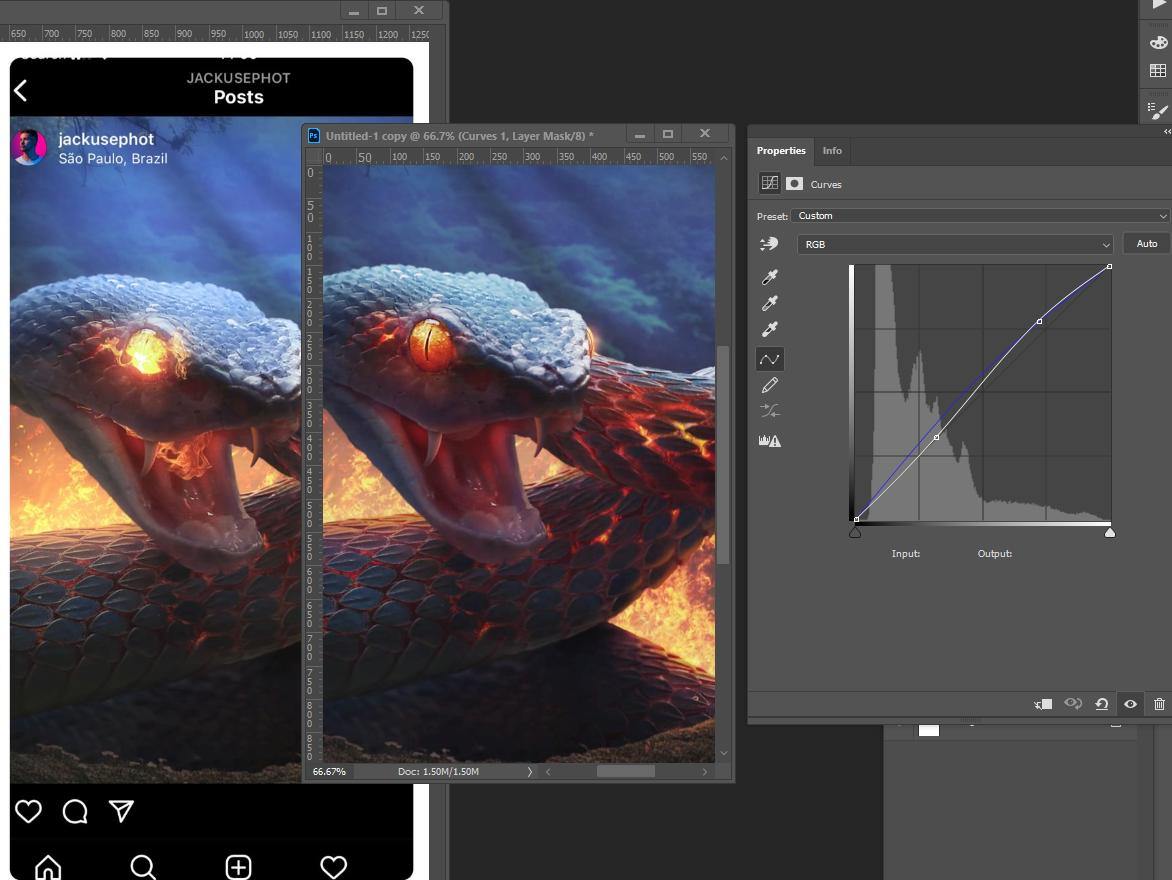 You could take this further, say make a selection of the sky and add another curves adjustment to brighten that portion of the image a little. Create a new layer paint some more flames (I just used the clone tool for that here), then another curves adjustment layer and clip it to extra flames layer, and brighten that by adjusting the curves. This is a very rough attempt, but I'm sure you will get the general idea. You could take more time and care, find the right brushes and get a better result. 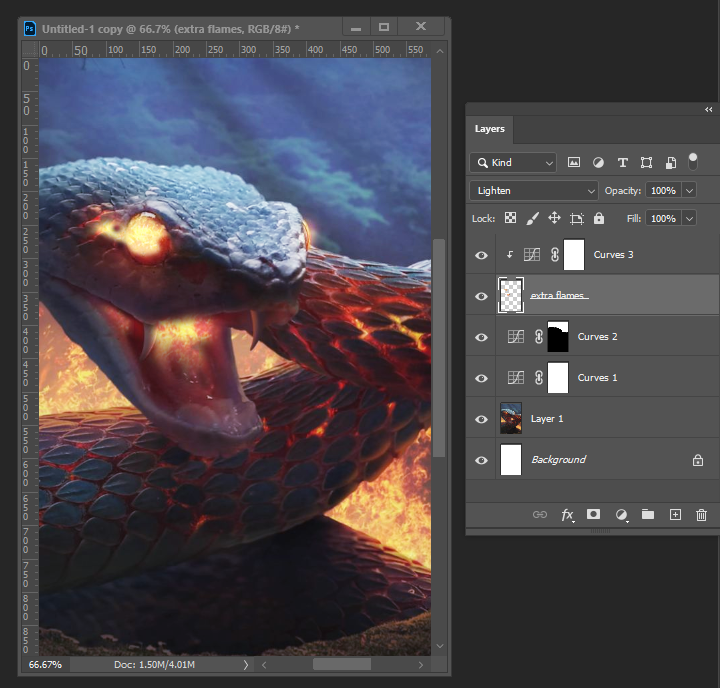 Not the answer you're looking for? Browse other questions tagged adobe-photoshop photoshop-effects photomontage or ask your own question.

2
How to create a glossy photo?
2
Photoshop CS6 - Creating figure
0
How to make photos color like this?
2
How to edit text that is in a jpg photo (using newer technology)?
0
How make a uniform weavy circle in photoshop