Is it possible to create a GREP function that will automatically change the first letter to capital letter in a word? For example: "moonlight" and GREP changes it to "Moonlight". Don't want to use Find/replace, because I want to embedded in alinea style.

Thanks for the help!

In general you can't use styles in InDesign to change the content of a text - only the appearance.

But in this specific case, it is actually possible because uppercase can be styled.

Make a Character Style where you set Basic Character Formats to All Caps. You can call it "Uppercase" or something like that.

In the Paragraph Style where you want the substitution to take place, make a GREP Style like this: 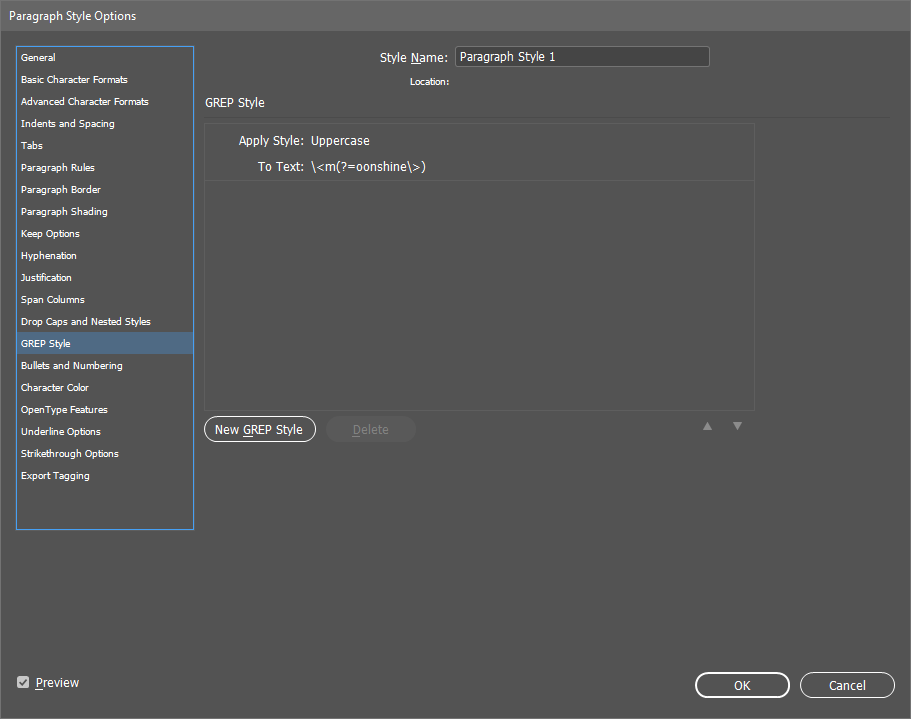 This applies the style "Uppercase" to text which matches the pattern: \<m(?=oonshine\>).

It selects an m in the beginning of a word \<, using a Positive Lookahead (?=) to make sure it's followed by oonshine which is the end of the word \>.

This seems to work well:

What might be a problem though, is that the character m isn't actually being substituted. It's just styled. So if you copy/paste the word from InDesign to another application, it won't be capitalized.

If you export a PDF and copy/paste from that, the word will be capitalized though. So it might not be a problem for you.

I wouldn't personally do it like this, as I think it obscures what's going on in your document. I would just perform a find/change at some point.

You could also look into using Autocorrect, but it only works when typing the word letter by letter - not if you paste it in.

I don't think you can.

As per the name, styles can only affect the formatting, not the content, in a story. Yes, you need a minor change, but I don't think that's what they made the styles for.

2
Get the start and finish of text in a certain character style in Indesign GREP
0
How to make GREP match everything between two markers, regardless the Forced Line Brake occurance
1
Indesign GREP: find everything before a matching sequence
1
How to solve a GREP to use on my TOC
4
Underline all initials after a tab
0
Indesign GREP capture only next line
1
InDesign GREP, Single Character Underlining
1
Indesign: GREP lookbehind
0
Append avatar image to each paragraph in chat style book