Where are the vanishing points in this picture?

I followed the line where the sea meets the sky for the horizon line but it just doesn't quite line up with the boat? I'm extremely lost, I would really appreciate someone to crack this one for me by drawing the lines on top...!

A man on a boat holding a freshly caught fish that's as large as he is; his pants and the deck of the boat are covered in blood

You seemingly have red or heard and maybe several times that there should be a vanishing point in the horizon. I guess you wonder now why this so often repeated sentence looks wrong.

The sentence is true in drawing construction theory in a case where you search the vanishing point of a set of lines which are all exactly parallel and horizontal above a flat ground. The horizon is the apparent line where the assumed flat ground and the sky meet in perspective images.

Every set of straight parallel lines have their own vanishing point and that point happens to be in the horizon only if the lines are horizontal.

If there are parallel lines in the 3D scene your photo presents they really converge towards a vanishing point in the photo (assuming the lens distortion is low enough), but it's not on the horizon because the boat is more or less tilted. In addition the lines of the real boat may be curved or non-parallel. And, as said, lens distortion can also spoil the effect by making the imaged lines curved.

In the next image I have drawn 2 perfect rectangular boxes. 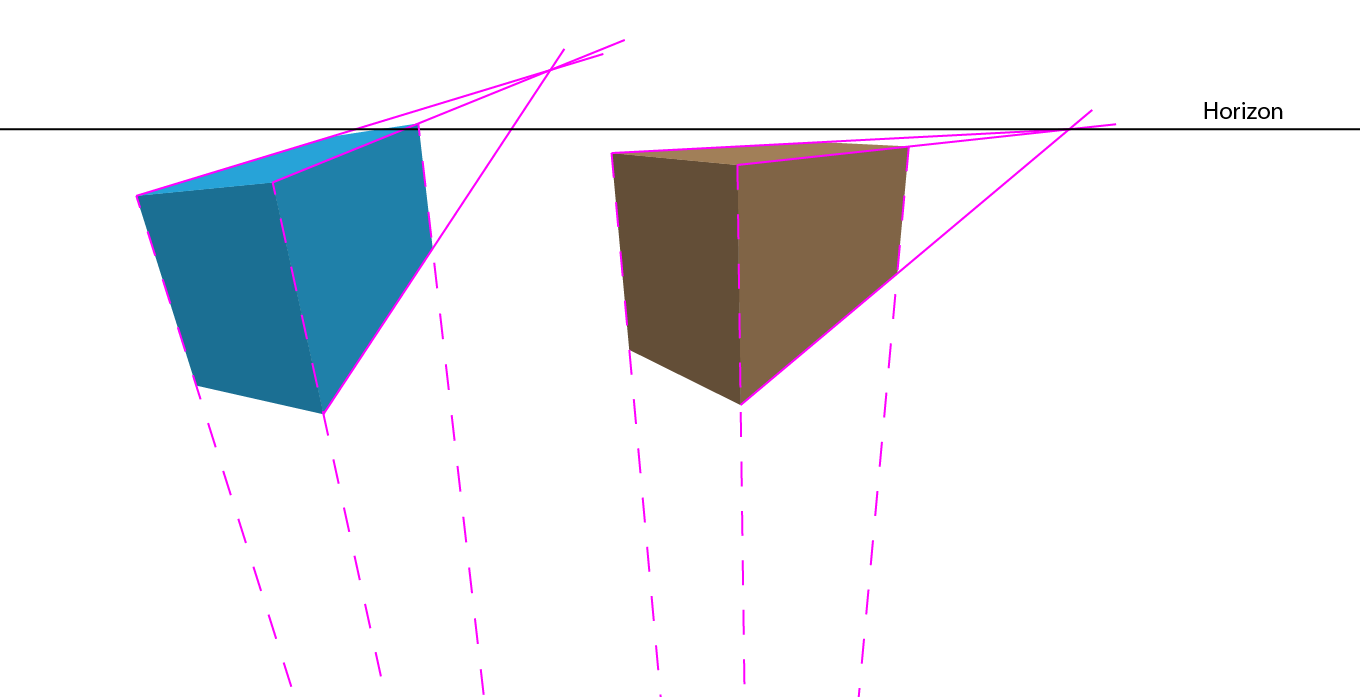 I have sketched on both of them 2 sets of parallel lines which converge at total 4 different vanishing points. The brown box is oriented to be horizontal. It's horizontal lines converge on my horizon line. Actually that's my way to tell to the watchers the box is horizontal.

BTW in GDSE vanishing points have inspired numerous questions before yours. The next old case contains a photo which has numerous vanishing points and not all of them are on the horizon because some sets of parallel lines (=edges of climbing and descending streets) contain non-horizontal lines. What is this type of perspective called?

This question is important. It shows a typical problem with understanding hierarchy of information that early and intermediary learners make. The common mistake is not being able to answer the question:

A lot of examples like this arise. For vanishing points and perspective drawing the answer is:

So, essentially the basic perspective drawing rules one is typically shown applies to things that lie one the ground and are parallel to each other. This only really good rule of thumb for to cities or individual objects in your scene. It is not a good generic rule.

Any real picture has infinite number of possible vanishing lines because the set of possible parallel lines are infinite.

In your picture there is very few lines that can be verified to be parallel. Thus its nearly impossible to say anything about the vanishing points of those lines. But certainly there is no reason to assume that the boat is parallel to the horizon plane.

* This is admittedly the magic thing you should learn. It would be way better if you never learned the method over the limitation. You can always look up the method, but you are capable of missing the limitation forever.

The image is a static snapshot of a dynamic changing environment.

As presented, it conveys a sense of movement - we know from experience that boats rock, pitch and yaw on the water, and seeing the vessel's deck is non-congruent with the horizon shows that it is a snapshot.

The same scene 3 seconds later might be level or reversed.

Answer: the vanishing point in-line with the deck is oscillating above and below the horizon with the motion of the boat over time. Photo is a single point-in-time.

2
What is this type of perspective called?

7
In a 2 vanishing points perspective system, can anything be placed to the right of the RVP?
2
How does the distance between stationary point and picture plane effect perspective?
1
Why does the vanishing points have to be 90 degrees apart in 2 point perspective?
3
Finding the possible vanishing points in a landscape
2
Why does moving the station point change the COV but not if you move the picture plane?
1
How can you define the closest actual plane using Vanishing Point?
2
What are the causes behind the distortion that happens when you place a cube outside the Cone of Vision?
1
How to find the fourth point on a plane defined by 3 points
0
How vanishing point and centre of projection both are same?
1
In two point perspective, why aren't the sides of this rectangle correctly foreshortened?