Question about what colours fall into the pointers gamut

Absolutely no idea if this is the best place to ask, if not, please point me in a better direction.

Basically, I have been using this software to determine if the pixel colours of an image (the pixel colours being in the sRGB gamut) are within the pointers gamut: https://pyco.gumroad.com/l/pgtool

E.g could the pointers gamut be determined from data that also contains luminosity data? Or is it something to do with how a CIE diagram accounts for chromaticity compared to how it would be accounted for in a full 3D space?

I fear I massively over-explained my issue but oh well. Also, I wouldn't be surprised if I'm making a few incorrect assumptions. If I am, feel free to point them out.

Essentially the cromaticity chart is a 2D slice of a 3D image. The critical thing that your lengthy question is missing is that you assume the ability to make colors is same in each slice.

This is not true. So for example the sRGB space is smaller when the lumniosity is smaller for instance. Wheras typically again as a example cmyk printing has a bit wider gamut in darker colors.

So the asumption that any color device has the same shape irrespectively of lumniosity is false. And thus lumniosity matters. So before you draw any conclusions check several lumniosity slices.

Thats the short answer the long answer is about 1000 pages of scientific text.

When the Tftcentral website says that chromaticity is what defines a colour gamut, they are doing so in the context of video screens which add light emitting primary colours, which are generated independently of each other. In that context it is true, but surface colours which reflect light work differently, so chromaticity can be misleading as a diagram to display Pointer’s gamut of surface colours. Unfortunately there is not an easy way to display a complex three dimensional shape like Pointer’s gamut. RGB 255, 255, 255 may technically be outside of Pointer’s gamut if it is assumed to represent a surface which reflects 100% of white light, as I think even the purest white object only reflects around 98% of white light, but in general I would assume RGB 255, 255, 255 would represent the brightest white in the image, rather than theoretical pure white, so that technically correct definition might not be what is required in practice.

The human visual system, and cameras which replicate the human visual system, treat the highest luminosity in view as pure white. You might need to assume that an sRGB 255, 255, 255 pixel could be of a surface which is only reflecting >90% of the white light. There is no way of knowing what percentage is actually being reflected. The moon appears white in the night sky despite being a dull gray in reality. This would in turn mean that all sRGB pixels in the image would need to be adjusted by 5% to 10% to get the actual surface colour of the object in the image in the tool you are checking. This should put the sRGB 255, 255, 255 pixels within pointer’s gamut in the tool as well. (N.B. if you are not already doing so, you need to take into account that sRGB values are gamma encoded, and you should convert to linear sRGB for this adjustment.)

Edit to explain the limits of a camera measuring RGB values, and whitepoint:

When measuring colours in a laboratory, you will have a known light source, and can calibrate with a known chemical pigment such as Barium Sulfate (BaSO4), so you know what proportion of the light a surface is reflecting. By this measure no physical object will reflect 100% of light and be RGB (255, 255, 255). Let’s say you measure a surface which has reflectance equivalent to RGB (240, 238, 230), and you then display that RGB on a video screen. Now imagine you scale the RGB values by a fixed proportion so that the largest value is 255, so you get RGB (255, 253, 244), and display that on a second video screen, but turn the brightness down so that the images match. The physical light being displayed by these two screens is identical. If you take a picture with a camera responding to that physical light, there is no way to recreate the RGB values of (240, 238, 230) from the first screen. The chromaticity of both values is the same, but the luminosity relative to the original illuminating light has been lost. The camera must assume the highest RGB value is 255 and scale the other RGB values by the same proportion, otherwise the camera is just wasting storage space. This is what makes chromaticity useful, as it is the value that stays constant when you can’t determine the relative luminosity. When analysing the photograph, it is then more sensible to assume the highest RGB value should be a typical highest reflectance value of 240, though it will always be just an estimate.

The —tolerance parameter should allow for an error in both luminosity and white balance.

An illustration of Pointer’s gamut at different luminosities:

This might be easier to understand with illustrations, here is a chart of pointers gamut at various luminosities from https://www.dpreview.com/forums/thread/4230570 (though luminosity is not the best word in this context). 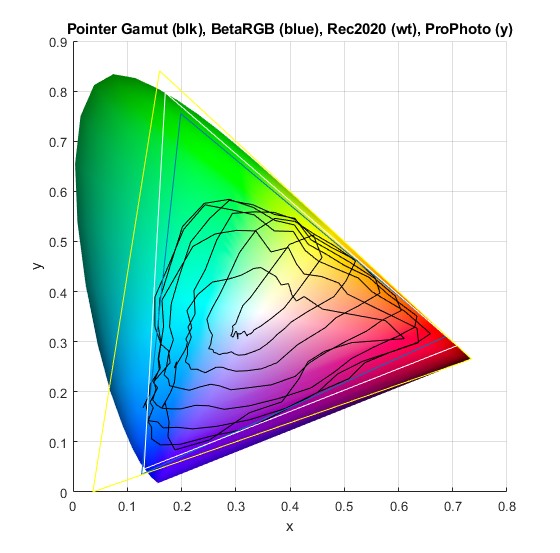 The sRGB gamut will also eventually reduce with increasing luminosity as each light emitter reaches the luminosity needed for white, but not as quickly as Pointer’s gamut, and not in such an irregular way.

There is also an article here https://chrisbrejon.com/articles/albedo-and-pointers-gamut/ approaching this subject from the point of view of cinematography. (Albedo means something similar to luminosity in this context.)

33
RGB and CMYK: Why both?
8
Simplest set of inks that could print the RGB gamut?
1
Question about spot colours in full colour documents
6
Photoshop colour picker with only colours within the printable gamut?
0
Computing the range of CIE L*a*b*
1
Blur effect becomes grey-ish and colours flat when transformed into CMYK
1
Trouble converting from sRGB to CIE 1931 XYZ