Is there a way (a setting or a shortcut) in InDesign to reset a character style to None after the end of a paragraph? Paragraph styles have the option for Next Style, but this does not apply to character styling.

Currently I'm using Quick Apply (ctrl+return+None) after each paragraph to reset the character style, but it is very time consuming if you have many lines with two or more different character styles.

NOTE: I'm using character styling because as far as I know you cannot have two different paragraph styles on the same line. See screenshot below for use example.

In your case I would have maybe used GREP styles shown on the image below. 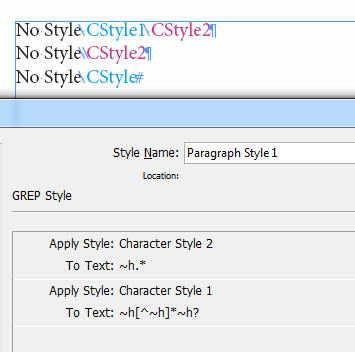 Here ~h stands for End Nested Style Here character which serves as a style divider (visible in special characters mode as a backslash). If you feel more comfortable with any other character feel free to replace all the ~h-s with anything you like from the drop-down menu.

The application order of the styles matters. Here are the expressions so that you could copy them:

In case you are interested in regular expressions used in GREP styles, here's how the above construction works:

If we now leave the second expression as it is, the Style 1 will be applied to EVERY “ENSH + text” pair. But if we include the following ENSH characher into this group too, the text AFTER the second ENSH will not meet the condition, just as needed. So we add ~h to the end of the expression and change it to ~h? to indicate that this ENSH is optional (as on line 3 on the example image).

You can learn more about the GREP syntax on any website that describes regular expressions like this one.