am learing Illustrator and this is in learing purpose. I try to draw one product in vector. Almost done but am not shure how to make this rounded shadows to be like on photo?

On left side is my work. Maybie this is not good apporch for professionals but am beginer.

I would recommend to choose a softer color for the front shadow. You can also drag the shadow gradient a slight bit farther down. The picture looks a little bit, as if they used some kind of blur on the edge of above the sharp shadow. You can use a line and some gaußscher blur, to soften that edge.

For the shape of the shadow (especially the corners) I would recommend you to look into the topic "Gradient mesh". It can totally transform your gradient game.

Lastly I would recommend to look closer to the colors used in the original picture. You are quite close. But you could add to the right side of the item a slightly ligther color, beneath the darkest point of the corner.

Actually everything essential is already said by others 4 days ago, but some details maybe are still welcome.

I tried to make a colorization example by drawing some vector shapes (the front top part only) on your image, but the the result was at least double as wonky as your own attempt. One should be much more skilled to get it right by tracing manually a low resolution photo.

To get something done I gave up and made my drawing based on a simpler, but much sharper image of another box. The box only resembled yours, but it had roundings and the top surface was extended to make a protruding visor. Here's the drawing: 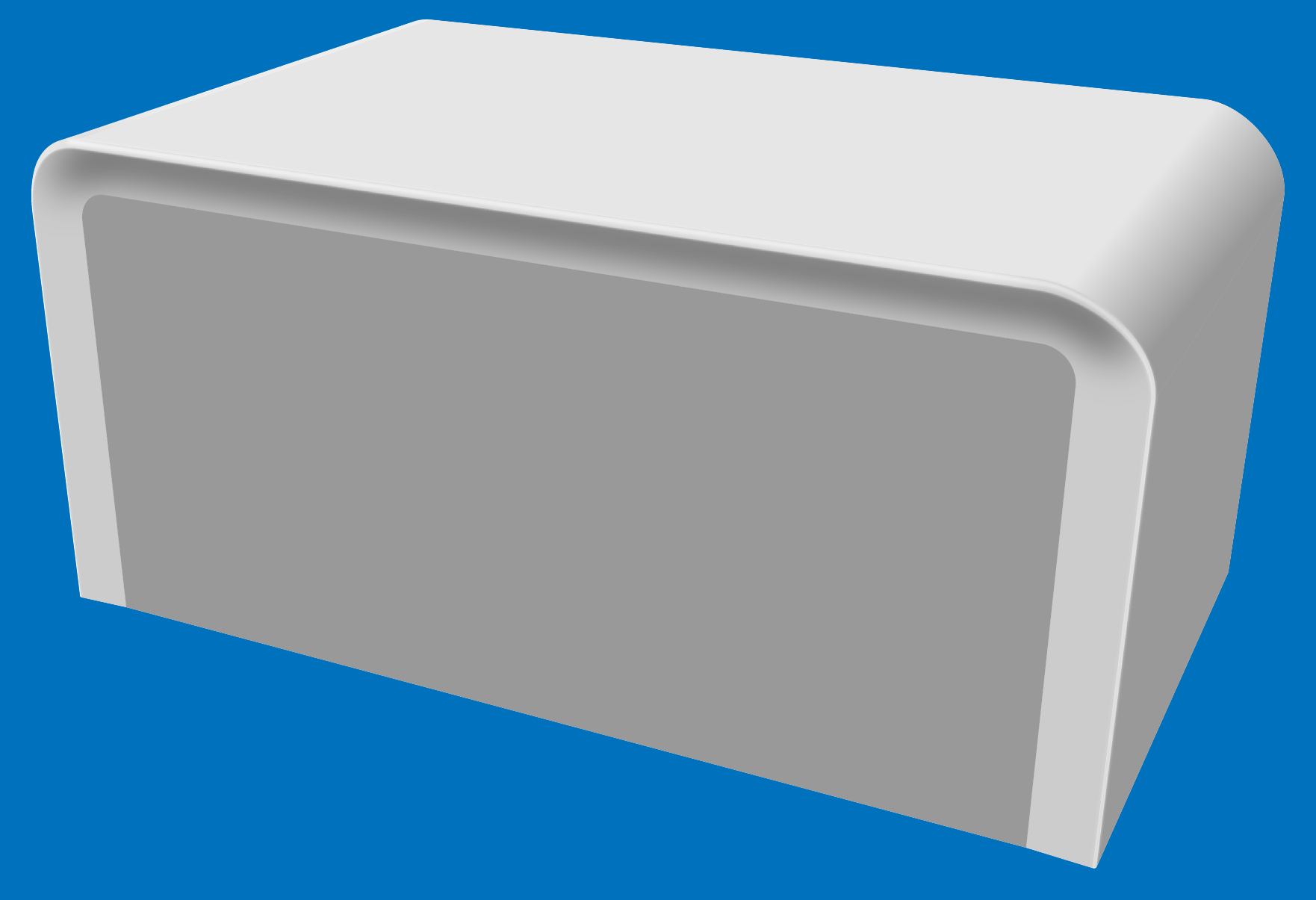 The blue background was inserted the reveal holes and leaks caused by non-fitting seams and transparency.

This is made in Illustrator, but it uses nothing which is unavailable for Inkscape or Affinity Designer users. Using Illustrator's gradient meshes and paths instead of blurred shapes keeps the colors well inside the shape areas without a clipping mask and they do not generate unwanted transparency.

The perspective is quite extreme. I admit I wouldn't never get it right by starting from a blank screen with no underlaying reference. But that wasn't your problem, you asked a receipe for shadows. In the next image the drawing is exploded: 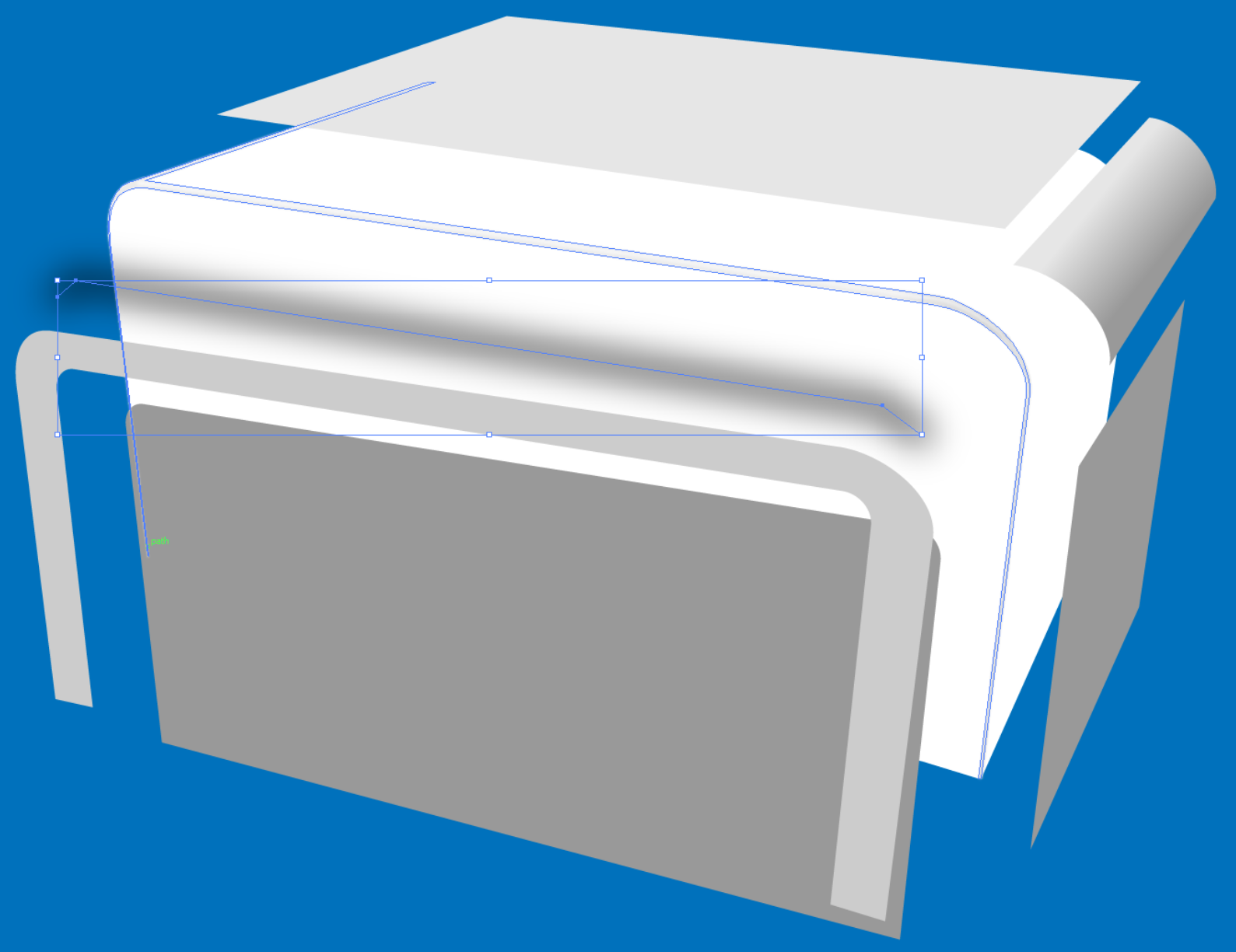 The wide curved linear gradient zone between the rooftop and the vertical right wall doesn't fit well, the perspective needs actually a conical gradient, but I do not used it. Fortunately the piece is here so short that the error is difficult to see.

The space below the visor is made by inserting a wide heavily blurred partially transparent black line. The rooftop covers about 50% of the blurred area, but at the left edge a little blur escapes outside the shape area. It's suppressed by inserting finally a clipping mask.

The rounded front edge of the visor was tricky. Rounding has virtually always some gloss. A transversal gradient is needed to make the gloss. The rounded edge areas (except the biggest one) are united to one and it has a gradient fill to make it darker in the right where its surrounding is darker. It was originally too near white, but its opacity is reduced to make it less offensive. That unfortunately leaks the background, but a white background patch fixed it.

As said, the rounded zone needs a transversal gradient to make it look round. To get it a white blurred stroke was drawn along the midline of the rounding zone.

In the back there's a big white patch just above the blue. It stops the blue leaking through transparency in few places. It's a Pathfinder union of all shapes. A duplicate of the same shape is used on the top as clipping mask for all. It's needed to stop the blurred black and white to escape outside the box area.

8
How to draw a smooth line (small in some places, large in others) like in this image
3
How to create a professional Floral Swirl Patterns
2
How were the curls on this monogram done?
0
Cannot create rounded corners on object in Illustrator
1
How do you add a gradient to strokes as a whole object (not individually)?
1
How to easily determine shadows and highlights of objects?
1
How to display better a product on a outdoor photo, without making it look childish and unrealistic?
0
Does anyone knows a good course for depth and shadows in illustrator?
0
How to create seamless object shadows from different layers
0
How did this artist create this shadow?