Why does this poster look off, like it's lacking something to focus on?

I'm new at graphic design so any help would be very appreciated.

Higher-up didn't provide that much info to work with, which is why it looks sparse, but I keep looking at it and feeling like it is missing something.

It feels like there isn't something to focus your eye on for some reason. Is there anything that I am not seeing here, or should I just scrap this and start anew?

Here is the poster: http://min.us/lKLagKkgJVGBY 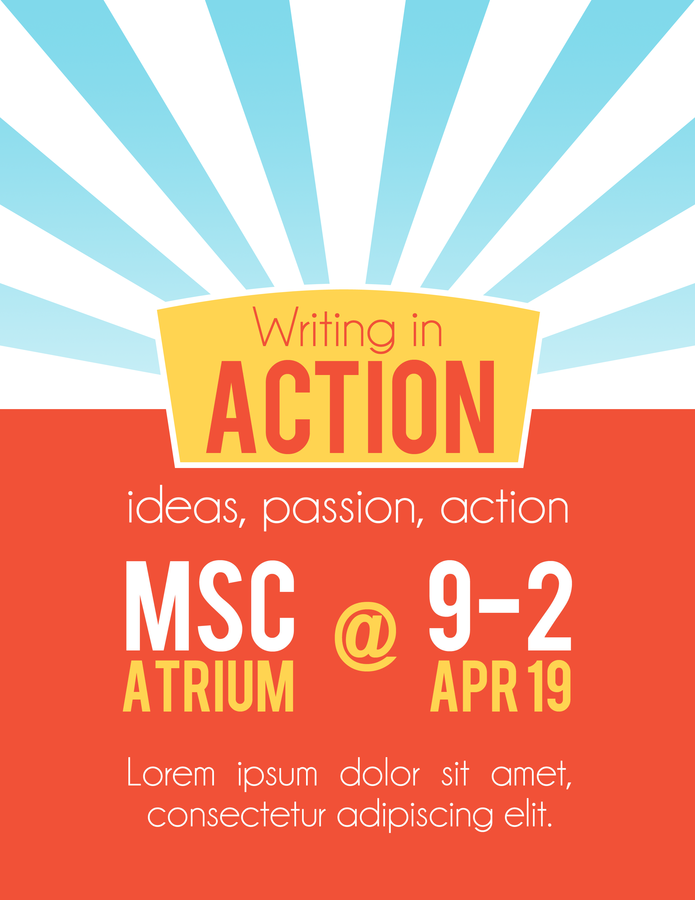 There's two parts to getting attention with a poster:

One issue: The 'ideas, passion, action' bit is slightly larger than the footer lorem ipsum text - too much difference to match and frame the 'when and where' text, too little difference to establish a hierarchy that guides the eye.

Depending on the brief, I'd make the 'ideas...' text smaller and closer to the central badge so it works as a footnote/tagline to the event title, and so the extra whitespace around the when and where makes it a clear, strong hierarchy: [Event title & tagline] > [when & where] > [other info]. Or, make them match and even up the spacing above and below the when and where text, so it's clear they're both equally weighted secondary supplementary information (so it's [Event title, plus tagline] > [When & where, plus other info]).

Another issue: Partly for the above reason, the when and where text looks like two separate equally weighted items, like you go either left or right when looking down the poster. Or maybe a viewer might even jump from the central badge to the generously isolated '@' viewing it as one eye-catching unit, then be like 'Why am I looking at an '@' symbol? Where do I look next?' before realising it's linking a place on the left and a time on the right. Even up the spacing around the '@', and make sure it's clear that this is one chunk where the '@' is a joining device, not a primary focal point.

And as I've already alluded to, the slightly but not clearly uneven spacing above and below the 'when and where' has a similar issue to the slightly different font sizes above and below: too different to match, too similar to imply any kind of hierarchy or relationship that would guide the eye.

Esthetically, I can't say that it looks bad but what this poster is missing is "an idea". There's no idea in the base of this poster. This is such a cliche visual that has been used millions of times. It's pointless and it has nothing to do with the topic you have there. Don't ever forget this: "GRAPHIC DESIGN IS IDEA. WITHOUT IDEA AND CREATIVITY, THERE'S NO GRAPHIC DESIGN."

Visually speaking, you've wasted the half(upper) part of the poster with the blue stripes that are not interesting at all. And you squeezed all the typography to the lower part. If there was an interesting illustration on upper part I would understand but with this way it makes no sense and it's not looking so good.

Also there's no kerning in the Typography.

32
RGB and CMYK: Why both?
4
How does one price something like a corporate annual report?
5
RGB palette to predetermined CMYK palette in InDesign and/or Illustrator